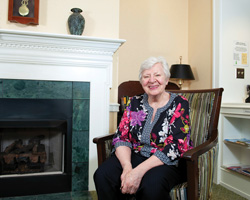 Goodwin Living (formerly Goodwin House) has been redefining aging since 1967. With a solid reputation for providing the best in senior living and healthcare, Goodwin Living covers the entire aging journey. It offers a full range of options including three campus locations, an aging-at-home program, an innovative brain health program called StrongerMemory, and specialized services such as home health, therapy and hospice.

Navigating the aging journey can present unexpected obstacles. Goodwin Living helps older adults plan for whatever may come along, both anticipated changes and those that are unpredictable. With a focus on total health and wellness, Goodwin Living strives to ensure older adults can thrive and stay engaged at every stage of life.

Over its 55-year history, Goodwin Living has also established itself as one of the region’s best employers. For four consecutive years, Goodwin Living has been selected as a Washington Post Top Workplace. This award is based solely on employee surveys.

The longest tenured team member currently working at Goodwin Living has been with the organization since 1970, and some team members later return as residents or clients. Stefanie Reponen (pictured) served as executive director of the Goodwin Living Foundation from 1994 to 2007, and she became a resident of Goodwin House Bailey’s Crossroads in 2019. Perhaps there is no better testament to an organization that serves a mission to support, honor and uplift the lives of older adults and those who care for them.

“When I was with the Goodwin Living Foundation, I fell in love with Goodwin House Bailey’s Crossroads. I told my sons that when it was time, that was where I wanted to live. That’s exactly what I did, and I have absolutely no regrets.”  —Stefanie Reponen