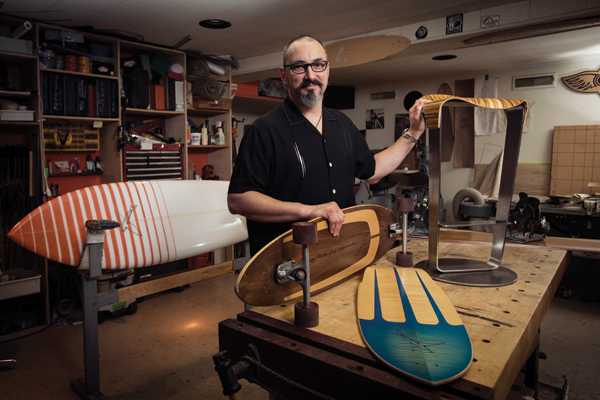 Bearing names like the “Racer X” and the “Fu Man Chu,” these are no ordinary skateboards. The decks (the board part) are made with black walnut and maple inlaid hardwoods, displaying a level of craftsmanship one would expect to find in a posh gallery or high-end furniture store.

That’s no coincidence. Their creator, Cristian Wicha, is also an accomplished furniture designer, whose modern pieces can retail for anywhere from $500 for a coffee table to $1,300 for a bench.

A visit to Wicha’s Falls Church workshop—located inside the 1961 bungalow near Lake Barcroft that he shares with his partner, graphic designer Patricia Hord—finds various sketches and prototypes amidst a backdrop of presses, clamps, neatly organized hand tools and pseudo-familiar-looking machines. (If he can’t find the right equipment to bring his design concepts to fruition, Wicha often makes his own.)

The rest of the house serves as a mini-showroom for his finished pieces—sleek objects made with stainless steel, wood, aluminum and fiberglass composites, which live comfortably amidst the home’s original appliances, period details and retro-inspired furnishings.

“I’ve been a lifelong model airplane pilot, and it got me into building,” explains the designer, 45. “My dad and I were always building planes out of paper or leftover Styrofoam food containers. I’ve just always made stuff.”

Born in Chile and raised in Reston, Wicha attended Paul VI Catholic High School in Fairfax and went on to receive a BFA from the Corcoran School of the Arts and Design in Washington, D.C., in 1991. Though his original major was sculpture, he discovered furniture design his second year in college. That’s when Corcoran professor Rick Wall (now retired) introduced him to the notion that furniture could be viewed as “functional sculpture.”

Wicha went on to earn a master’s degree from the Rochester Institute of Technology in New York, and then landed a job at BDI, a Chantilly-based outfit that specializes in contemporary furnishings and home theater furniture, where he worked for 14 years. The company still carries some of his designs today, including the popular “Fin” table—so named for its elegant shape, which resembles a shark fin or the rudder of a surfboard.

Though he is now an independent artist, Wicha doesn’t accept custom furniture commissions. Rather, he designs and licenses prototypes to manufacturers like BDI who then produce and sell his work. It’s a symbiotic relationship, Wicha explains. He’s careful to select partners who share an appreciation for fine craftsmanship.

“I’m not making disposable pieces,” he says. “There is no design obsolescence. [Permanence] is something I try to achieve in everything I make.”

While his designs are built to last, Wicha’s creative repertoire is constantly evolving, a manifestation of his restless mind. In addition to contemporary furniture and skateboards (which are hand-signed and sold under the brand name “Flying Fish”), he makes surfboards, carves tiki statues and is a serious photographer.

He also teaches courses at the Corcoran (now part of George Washington University), along with weekly woodworking classes at TechShop, a public fabrication and prototyping studio in Crystal City where community members have access to a full suite of equipment, including laser-cutters, heavy-duty wood- and metal-working machines, plastics and electronics labs, a waterjet-cutter, 3-D printers and more.

What’s he itching to design next?

“I want to build a house,” Wicha says without hesitation. “One of the first things I remember drawing is a house. I would draw houses and bobsleds [as a kid]—this was during the ’76 Olympics. We’ve got land in West Virginia and that is my drive and my goal: to save money to build a house.”

So what kind of house will it be? “A pretty crazy one,” he says.