MLB fan 'Mr. Jeff' is revered for serving as a 'positive force' in the community. 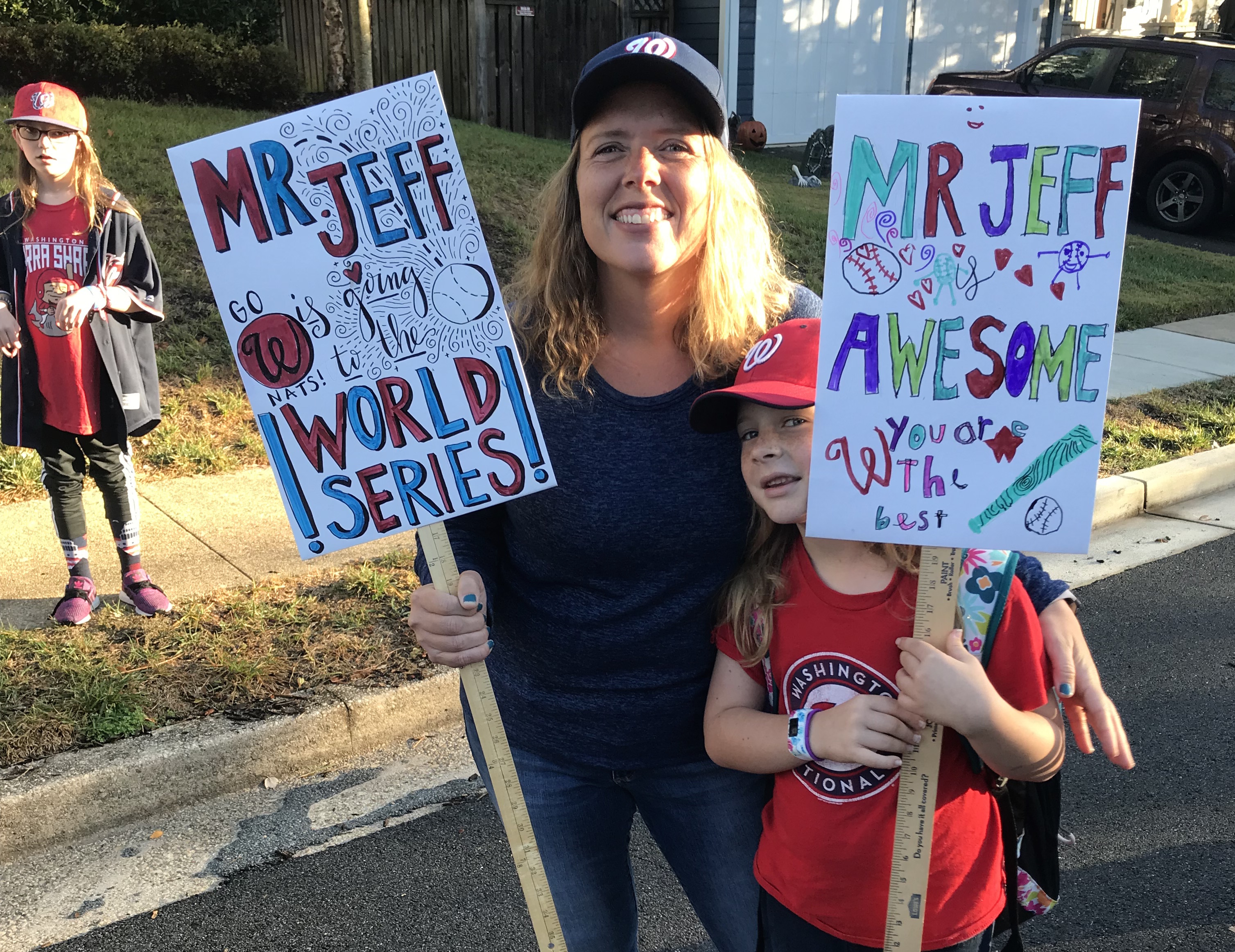 Just before 8:30 this morning, a gaggle of parents and kids gathered at an intersection near Nottingham Elementary, seemingly meeting up for the short walk to school. But within minutes, the small gathering swelled to several dozen people, some hoisting signs and several sporting crimson Washington Nationals hats.

“I want to go with the crossing guard to the World Series,” one boy says.

What began a few days ago with a simple hand-drawn sign posted by a crossing guard, known as “Mr. Jeff,” soon became a call-to-action for members of the school community. 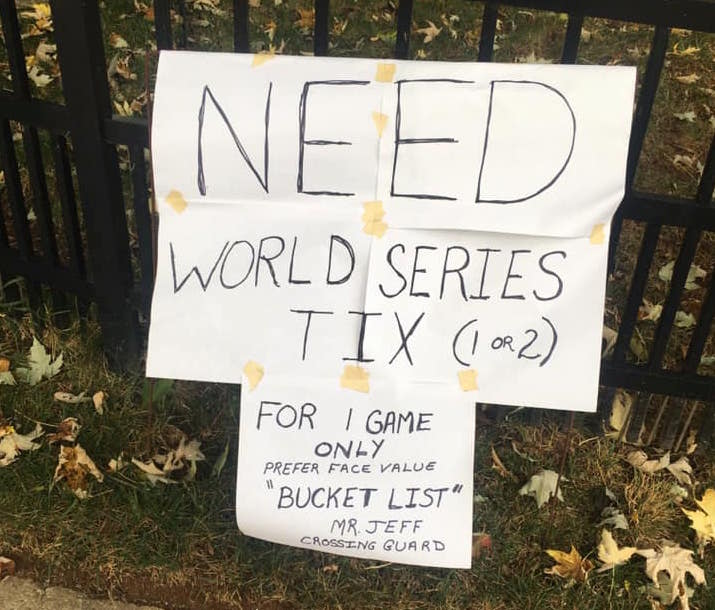 Rachel Sullivan, a Nottingham parent, snapped a photo of the sign last week and posted it to a school-related Facebook group. Another parent, Colleen Wright, soon created a Google form parents could use to pledge donations and posted it to the social network on Monday night. By Wednesay morning, Wright had raised more than $2,400.

“This brings tears to my eyes,” a mom in the crowd says.

It’s now 8:38, and a few peace signs go up to hush the throng. Wright explains that Mr. Jeff has no clue what’s about to happen and that parents and children alike must stay quiet until he’s handed the tickets. And then we’re off, power-walking in a pack toward the unsuspecting recipient.

Jeff Covel, named one of Virginia’s Most Outstanding Crossing Guards in 2014, cheerfully greets families each day (mine included) as they hurry through the morning rush. The Arlington resident is a Nats fan, he says, but otherwise continues rooting for the Red Sox he has supported since growing up in his native Massachusetts. Last week, when the Nationals won the NLCS championship and clinched their spot in the World Series, his daughter reminded him that attending the World Series had always been on his bucket list. He promptly made a sign, forged with masking tape, and posted it near his crosswalk when he was on duty.

Covel’s friendliness has made an impression on several Nottingham parents. Though Sullivan was away on a work trip and couldn’t attend the ticket hand-off this morning, the mom who walks her two sons to school each day shared her thoughts with us via email.

“I’m just bursting with joy over this amazing thing our village is doing for special Mr. Jeff. This truly is the heart of the Nottingham community shining [a] light,” Sullivan tells Arlington Magazine. “This is what we do for the people in our lives who are making a positive impact on our children and community every day. Mr Jeff is such a positive force. Always a smile to start our days, remember kids [sic] names, watching out for our safety. He’s just a bright spot in our days.”

As the now sizeable crowd sprinkled with dogs and strollers approaches Covel, he likely knows something is up. With a brief speech, Wright hands him the tickets, and Covel embraces her with one hand, still wielding the stop sign in the other. He’s got a mini Screech tucked into his uniform and thanks the crowd, which erupts with a “Go Nats! Go Nats!” chant.

“We’ll try to bring home a W in the World Series,” he says, before adding “[now] we don’t want anybody late for school.”

A few feet away, Nottingham’s principal and assistant principal stand among the dozens of observers, many brandishing cell phones.

“It’s like a faith-in-humanity kind of thing, and I think it’s really serendipitous that it happens on Unity Day, which is our big push for anti-bullying and for kindness and inclusivity,” says Principal Eileen Gardner. “It’s a perfect message on a perfect day.”