A master bedroom transforms into a cozy retreat. 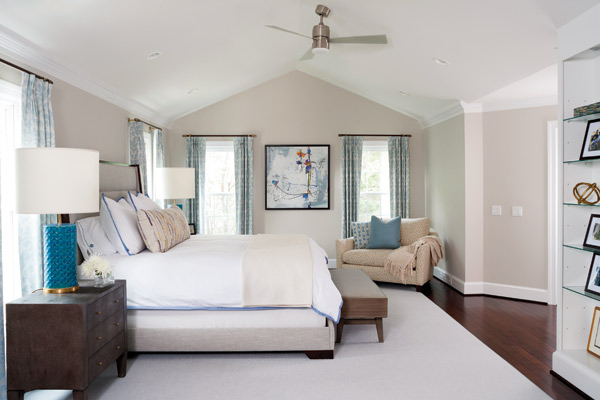 The first thing to go after Robyn and David Quattrone bought their McLean home near Lewinsville Park was a space-hogging, pyramid-shaped fireplace in the center of the master bedroom. The challenge then became identifying a look that they could both embrace.

At the recommendation of their remodeler, Ali Tatari, the Quattrones turned to Arlington designers Melanie Whittington and Angela Sentz for help. “They wanted a gender-neutral, organic, W-esque feeling,” Whittington says, referring to the chic hotel chain, with a serene palette of grays and blues. The couple also wanted a comfortable place to curl up with sons Leo, 11, and Nate, 9, who attend Landon School in Bethesda. 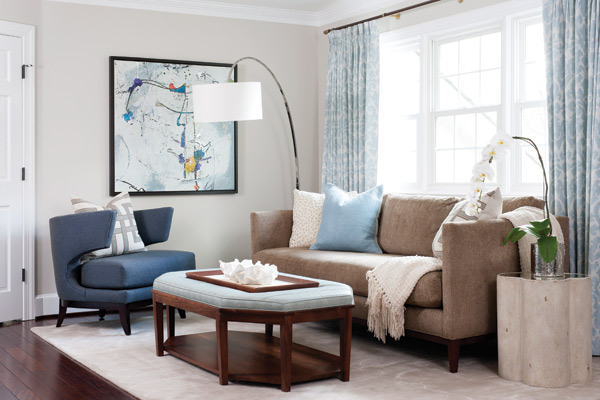 As a focal point, the design team chose a colorful embroidered linen by Romo for the bed’s main accent pillow. Keeping to the blue-gray spectrum everywhere else, Whittington and Sentz found variety in texture—a mirrored tabletop, shagreen bedside tables, a leather ottoman. “That’s what makes the space not look flat,” Whittington explains.

Robyn admits to being nervous at first about having a television in the bedroom, but the room’s layout lent itself to two distinct zones. The sleeping area features a high, pitched ceiling, while a sitting area at the opposite end of the long space (see inset photo) is marked by a lower, flat ceiling. The latter is a cozy spot that’s proved perfect for family time, she says: “The boys and I get under a blanket and watch TV here all the time.”

WE LOVE THIS SPACE BECAUSE…“It’s really comfy and warm, and we can all be in our PJ’s and just hang out.”