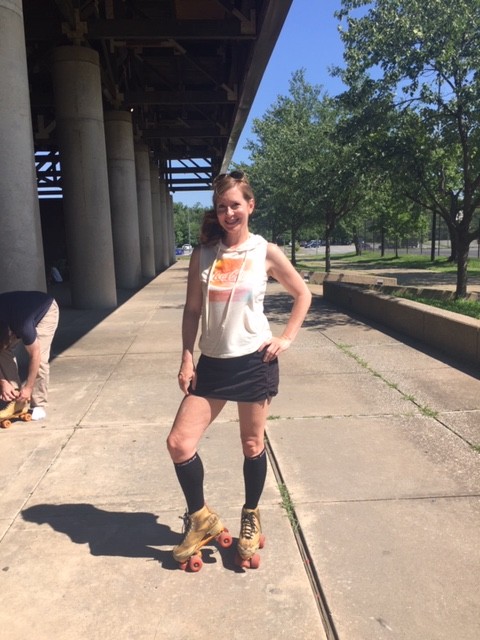 The writer, at her 48th birthday party.

Last July, I hit the outdoor roller-skating pavilion in Anacostia, D.C., rocking a side ponytail and a vintage-style Coke T-shirt. The deejay was blasting Blondie’s “Heart of Glass,” a No. 1 hit in 1979 when I was 8 years old. Initially my skating was tentative, but I became more sure-footed with each revolution around the rink.

More than 30 years had passed since I had last worn roller skates, but soon I was skating backward, remembering tricks like shoot-the-duck, and getting nods of approval from the regulars. The retro soundtrack, the similarities to my hometown rink (Skateland USA in Greensboro, North Carolina) and the breeze that ruffled my hair as I picked up speed transported me back to my carefree youth like a virtual reality experience. As I skated alongside my friend Kyle, she commented, “This might be your most fun birthday party yet!” It was my 48th.

My friends retired one by one to the sidelines for a nostalgic Pixy Stix sugar rush, but I skated on, intent on celebrating my birthday to the fullest. Five minutes before the rink closed, the deejay played yet another good song. One minute I was skate-dancing to the commands of the “Cupid Shuffle”—To the right, to the right, to the left, to the left—and the next minute I was on the floor, pain shooting up the arm I had used to break my fall.

Several bags of ice later, I learned at Virginia Hospital Center that I had fractured my wrist in two places and would be cast-bound for six weeks.

Maybe I shouldn’t have been skating at all, given my risk profile. As I grew into adulthood, I had watched my grandmother and mother each shrink six inches, the first inkling of genetic trouble. When I reached my mid-30s, new studies indicated that prolonged use of Depo-Provera, a birth control method I had used for six years, was associated with bone loss. My doctor began annual screenings, and thankfully, by age 37, my depleted bone density had returned to normal levels. Six months before the roller-skating party, though, I had received a diagnosis of osteopenia, the irreversible precursor to osteoporosis.

At 47, I was on the young side for osteopenia, which is diagnosed based on a bone mineral density scan. The National Osteoporosis Foundation recommends that women have their first scan at age 65 and men at age 70, unless other risk factors are present. For someone like me who is at risk for osteoporosis—my mother’s bones resembled “Swiss cheese”—the medical guidelines change to age 50 or 10 years since the previous bone density scan.

Though I wasn’t yet 50, I pressed for a scan at my annual exam despite my doctor’s misgivings about ordering the test. Bone density is believed to be stable until age 50, but my experience has left me worried that other women aren’t screened as early as they should be.

That scan, which resulted in my osteopenia diagnosis, gave me extra time to stem the disease’s progression. I already had incorporated most of the medical recommendations to prevent bone loss—like exercising with weights, avoiding excessive alcohol and refraining from smoking—and I immediately began taking calcium and Vitamin D supplements. According to the stadiometer—I always ask to be measured when I visit the doctor’s office—I am 5 feet 6 inches and holding.

Like driving on black ice, osteopenia is not a problem until there is an accident, so up until the skating incident I hadn’t given its implications much thought. My physical recovery was straightforward; no opioids or surgery on my wrist were necessary, just a cast for six weeks and physical therapy. The biggest challenges were unzipping a dress and twisting off a jar lid. The other, less visible impacts of my injury were still to come.

It turns out my sense of self also took a tumble that day when I fell at the roller rink. Adventure has long been my calling card, but in the wake of my osteopenia diagnosis, I had to consider other lifestyle changes besides getting more calcium into my diet. In 2014, I had traveled solo for a year, hiking volcanoes in Nicaragua, skinny-dipping in the Mediterranean and learning to surf in Hawaii. I have gone on safari in Kenya; biked from Georgetown to Harpers Ferry, West Virginia; and hiked an Icelandic glacier.

Outfitted with a waterproof cast, I water-skied and paddle-boarded at the beach over the summer. I could curtail these athletic, thrill-seeking endeavors to lessen the likelihood of broken bones, but that would compromise the core of who I am. At the same time, I recognize that a failure to practice more caution risks the very health and mobility I need to stay active. It’s a fractured, Catch-22 future: self versus safety.

As if an existential crisis was not enough, the collateral damage from this injury has surfaced other unwelcome thoughts associated with aging. A worn-down body suggests that I’m growing older, regardless of what the mirror says. Growing older means I’m running out of time to find someone special. And as a single person I’m left wondering, “Who will comfort me when the next bone breaks?” I’m not fragile, but my bones are.

Julia Parsons’ favorite things to do in Arlington, where she has lived since 2006, include riding the Washington & Old Dominion bike trail, dining at Pupatella and shopping at Current Boutique. She is a manager in the federal government and an avid UNC Tarheel. She can be reached at flipflopskiphop@gmail.com.