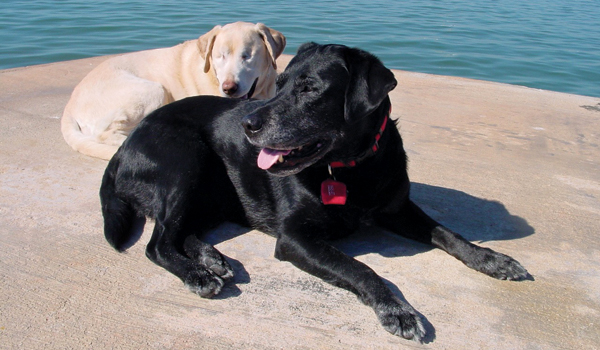 When Falls Church City resident Moira Donohue sat down to write Kangaroo to the Rescue (National Geographic Kids, 2015), a new children’s book about animal heroes, she remembered a story she had read a decade earlier in her vet’s annual holiday card. The card described Maggie and Pilot, two Labrador retrievers from Arlington who had a special relationship. Maggie had gone blind at four-years-old, at which point the prophetically named Pilot took it upon herself to act as Maggie’s guide dog, standing close enough for Maggie to touch and leading the way.

“When Suburban Animal Hospital wrote about it, the dogs were still alive,” Donohue explains. It wasn’t until she sat down to interview the dogs’ owners, Cathy Jamieson and Fred Edwards, who live in East Falls Church, for her book that she heard the rest of the story.

After Maggie passed away in 2007, Jamieson and Edwards discovered that Pilot was completely deaf. They had never realized it before, because Maggie had acted as her ears. Pilot died in 2009. “We think of Maggie and Pilot as a once-in-a-lifetime pair,” says Jamieson, “destined to be there for each other.” 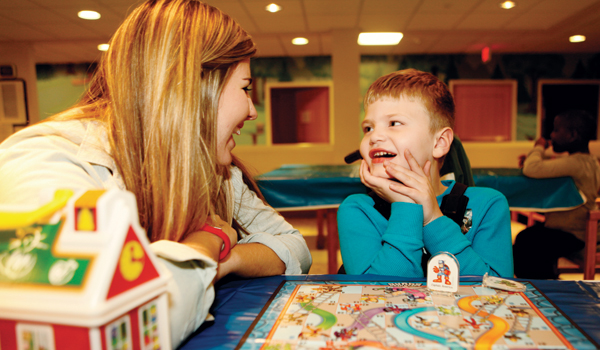 Not Your Average Sleepover

Every Friday night, some 30 children flock to Jill’s House (jillshouse.org) in McLean for a weekend of fun. But this is no ordinary slumber party or sleepaway camp. Parents refer to the place as “a Great Wolf Lodge for kids with special needs.” And many say it’s a godsend. While the kids play on accessible slides or splash in the pool using waterproof wheelchairs under medical supervision, their parents get a respite from the stress of providing round-the-clock care.

“I’ve had dads and moms grab my hand, and say, ‘We would not be married if it were not for you guys,’ ”explains Denise Daffron, the nonprofit’s vice president of advancement. “Some parents have not had a date in 16 years.”

Founded by members of McLean Bible Church, Jill’s House offers subsidized stays and is open to all families of children with intellectual disabilities, such as Down syndrome, as well as developmental disabilities such as autism and cerebral palsy. The popular program, which has a long waiting list, is now expanding to California, Texas and Indiana. 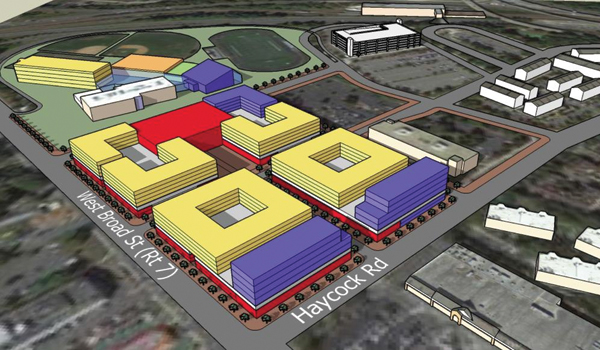 Occupying scant more than 2 square miles, Falls Church City (population 13,600) may be nicknamed “The Little City,” but it’s not quite as little as it used to be. In fact, it’s grown by 34 acres, thanks to a late 2013 boundary adjustment with Fairfax County. Now the city and its residents must decide how to develop the newly acquired land, a parcel near the West Falls Church Metro station bounded by West Broad Street and Haycock Road.

“It’s one of the biggest decisions the city will ever make,” says Economic Development Director Rick Goff, noting that the city is now in the process of hiring a consultant to manage the planning stage, and could review development proposals in the next six months to a year.

In February, experts from the Urban Land Institute released a report suggesting a 10-year project that would create a new George Mason High School and build out the remaining site with a mix of restaurants, condos, active-adult apartments and a movie theater. 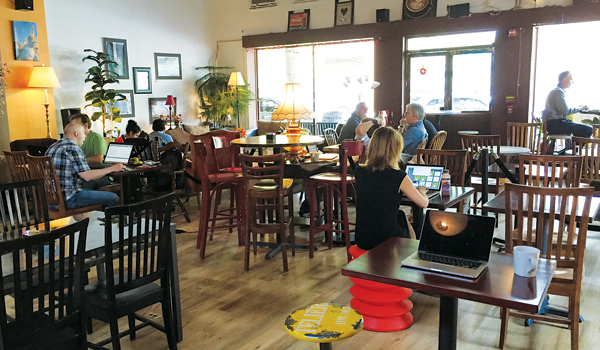 A novelist, a consultant and an investor walk into a coffee shop. That’s not the setup to a joke; it’s a daily reality at Cowork Cafe (coworkcafe.com), the newest “coworking” office in Arlington, which shares space with Boccato, the coffee and gelato bar on Wilson Boulevard in Clarendon. Co-founder David James, who coined the concept with Ramzy Azar, is a software developer who’s lived in the neighborhood for 10 years. “I was looking for a space to work,” he says, “so essentially, I created a space that I would like to go to myself.”

Since February, some 30 professionals have signed on, paying $150 per month for a membership that includes a variety of work spaces, Stumptown coffee and snacks, fast Wi-Fi, private soundproof phone booths, web conferencing and equipment including a printer and paper shredder. The new venture joins UberOffices (which offers coworking space in Rosslyn and Tysons Corner), Link Locale on Washington Boulevard and CoWork CoPlay on Wilson Boulevard (which caters to working parents by providing day care) in the shared-office trend. 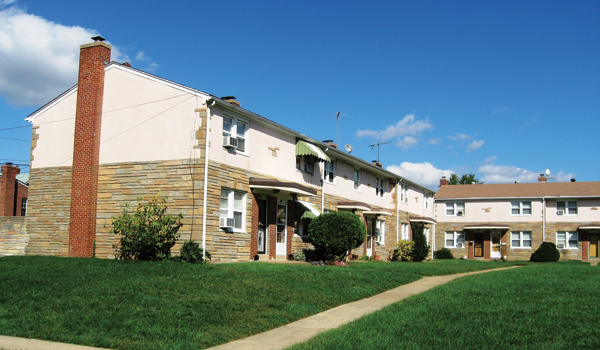 In 1863, the federal government created Freedman’s Village, a settlement for former slaves, on a portion of the estate owned by Mary Anna Custis Lee, wife of Confederate Gen. Robert E. Lee. Thirty-seven years later, Freedman’s village was disbanded and became part of Arlington National Cemetery—at which point many of its residents relocated to neighboring Queen City.

As a boy, John Henderson lived in Queen City until 1942, when the government exercised eminent domain and reclaimed 27 acres of the neighborhood to make way for the world’s largest office building. “We lived right where the Pentagon is,” says Henderson, now 93. “For a year they just drove piles into the ground. Later on, the people had to move, because of the building of the roadways.”

In 1945, Henderson’s family moved to the George Washington Carver Homes on South Rolfe Street, a group of 44 stucco-and-cinderblock town houses in the historically African-American neighborhood now known as Arlington View, which soon became home to many families displaced by the Pentagon construction.

Now Carver Homes seems to have reached the end of its course. Recently, the owners of the cooperative—some of whom were born there—agreed to sell the property to Craftmark Homes, which plans to build 50 town houses on the site.

Archivist Judy Knudsen with the Arlington County Library’s Center for Local History is determined to capture the history of this noteworthy subdivision before it disappears. “There’s just not that much documented…about what the community was like,” she says. To fill the knowledge gap, the Arlington County Library is recording the voices and stories of former residents like Henderson. The interviews will join the library’s collection of oral histories. 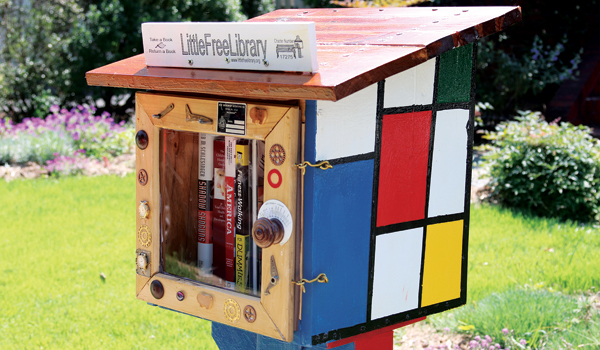 You don’t need a library card to borrow from a Little Free Library (littlefreelibrary.org); just open the miniature front door and reach inside. The average library looks like a freestanding birdhouse, holds about 25 books and operates on the honor system, inviting fans to borrow a volume or two, or drop off a favorite to share. These diminutive literary troves are popping up in neighborhoods across the country. In January, the number of Little Free Libraries nationwide surpassed 25,000, with a dozen in Arlington.

Though the structures can be purchased online, Jim Dooley of Westover decided to build his own. “I had been wanting to do it for a couple of years,” says Dooley, whose stash is devoted to children’s books.

“Then I had a major cardiac incident, and I suddenly had time.” In the beginning, Dooley says he had to rely on his 9-year-old daughter, Megan, for book donations. But then word got around, and now the rotating supply of kids’ titles is self-sustaining.

“People bring stuff back, or bring their own books,” he says. “Last fall, somebody tied a big silver balloon to [the library], I think as a way of saying thanks. That totally made my month.”