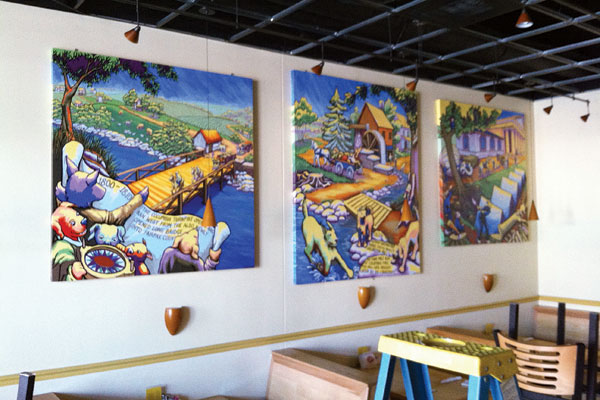 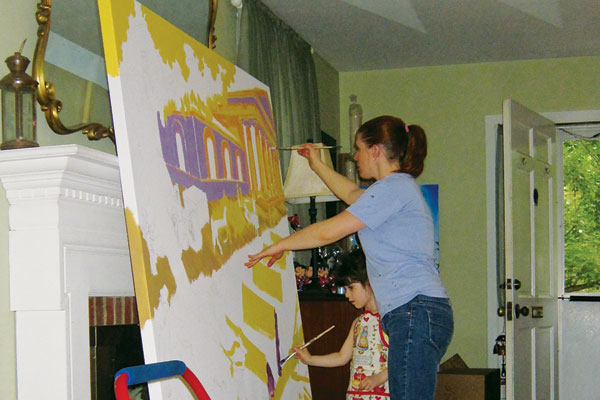 Want a side order of history with your pizza? Stop by the Lost Dog Café on Columbia Pike. Painted murals in the dining room, created in 2012 by Cherrydale artist and Yorktown High School alumna Jessica Lovelace, recount 215 years of Arlington history, dating back to the year 1800.

Take the painting of Columbia Pike, a montage that depicts previous occupants of the block where the restaurant stands today, which Lovelace pieced together after consulting old aerial maps. The lower-right corner features the former Bob’s Big Boy that once hoisted its hamburger across from the current Arlington Cinema & Drafthouse.

There is a bit of artistic license at play. Though the murals are based on letters and archival photos that Lovelace found in the Library of Congress and the Arlington County Library’s Center for Local History, all of the humans have been replaced with frisky mutts.

The artist also found a way to hide a bit of her own family’s past in plain sight. “My grandfather helped build the Pentagon,” she says, “so I painted his yellow pickup truck in the background of that picture.” 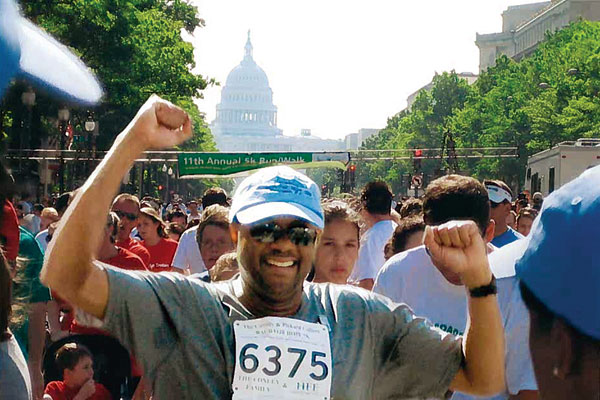 Woodside Estates resident Mark Moore wasn’t terribly concerned when he checked into Reston Hospital Center for a few tests on May 14, 2007. He fell asleep, and when he opened his eyes again, he remembers being shocked to hear the television newscaster talking about Father’s Day. At 46, the telecom executive had survived two strokes, as well as surgery to remove part of his skull.

Though he couldn’t yet walk or tie his shoes, Moore was determined to make a strong comeback. At first, walking 1.5 miles per hour on a treadmill felt like a sprint, he says. But the following May, he completed the Race for Hope 5K in D.C., which raises money for brain tumor research, in 36 minutes.

A short time later, Moore sold his business for $180 million and started a foundation with his wife. The Mark and Brenda Moore Family Foundation now supports Inova Mount Vernon Hospital, where Moore learned to walk again, among other causes. “I wouldn’t be sitting here today without the wonderful medical care I received,” he says, “and we just wanted others to receive the same thing.” 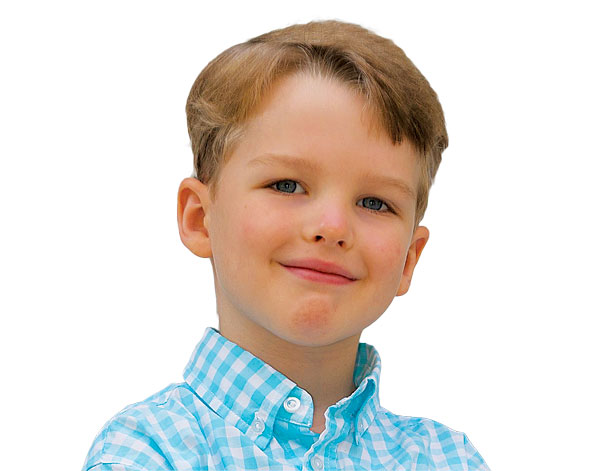 Legendary musician Sting had a hard time keeping a straight face earlier this year when, during an interview about his new musical, The Last Ship, he was asked, “Why are you called Mr. Sting? I like it, but it’s kind of unusual.”

The interviewer, Iain Armitage—a first-grader in a bow tie—was also a bit of an outlier. The son of stage actor Euan Morton and director Lee Armitage, Iain got his start as a reviewer after seeing his first musical, Hairspray, at Arlington’s Signature Theatre. When his mom started recording and posting his enthusiastic reviews on YouTube, they quickly went viral. It wasn’t long before the young critic, who lives in Ashton Heights, began snagging interviews with celebrities like Vanessa Hudgens and reporting from the Tony Awards for Perez Hilton.

Now 7, Iain is not a tough critic. Asked to name his favorite play, he replies, “The name is very long, because it’s every show I’ve ever seen mixed up into one.” And despite his fame, he’s happy to share his trade secrets with fellow journalists. He gave this reporter a grape lollipop and entertained her with a magic trick. As they say in the theater, that’s a tough act to follow. 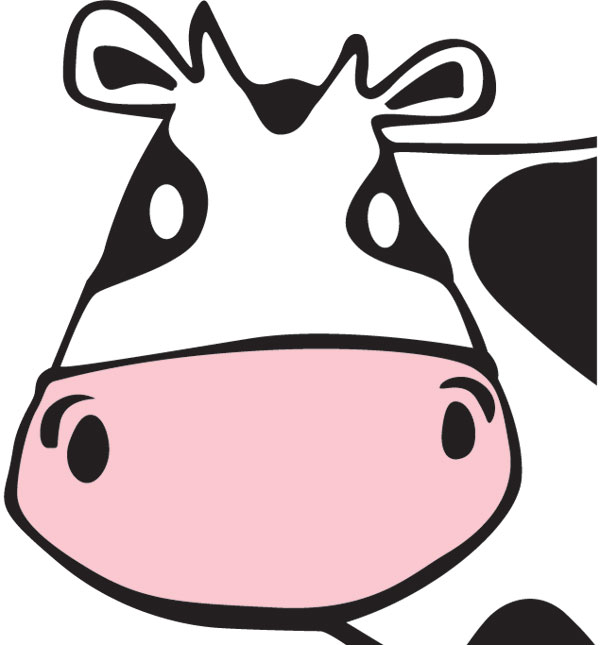 “They love this stuff so much,” says Bill Madden, CEO of Mad Fox Brewing Company in Falls Church. “I’ve heard they just come running across the field when our truck pulls up.”

One might easily assume he’s describing a happy-hour crowd stampeding toward the latest craft brew, but Madden is actually talking about a herd of beef cattle and their love of a brewery byproduct called “spent grain.” Each week, a truck carrying 55-gallon barrels of the stuff leaves Mad Fox, bound for a Virginia livestock farm.

Spent grain is what remains after barley and wheat are soaked in water. After the sugary solution known as “wort” is drained off to be turned into beer, the leftovers make a tasty snack for cows, goats, pigs, even chickens. Mad Fox makes a point of donating its leftover grains. “Putting them in the garbage would be horrible,” says Madden. “We’re just happy to make something out of it.” This fall’s bovine banquet will include spent grain from an Oktoberfest beer called Hitzig Frau. According to Madden, “that’s Low German for Hot Mama.” 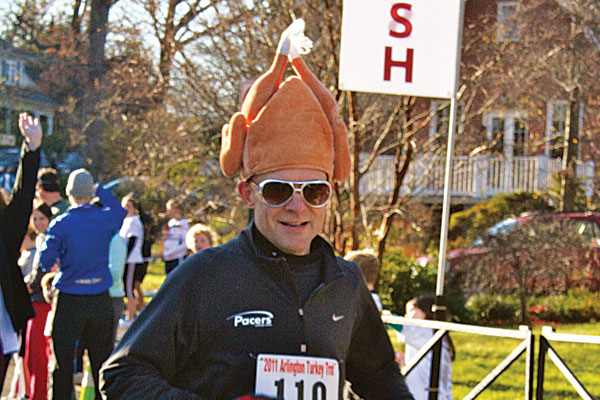 Each year as the sun rises on Thanksgiving morning, a strange crowd begins to fill the streets of Lyon Park—runners in tutus and turkey hats, Pilgrims decked out in spandex, and for some reason, a man dressed as a giant banana. “They stream up Highland and down Pershing … it’s like bees returning to the hive,” says Mark Riley, organizer of the annual Arlington Turkey Trot (www.arlingtonvaturkeytrot.org). At 8 o’clock, the runners sprint off, followed by joggers, walkers and a cadre of stroller-pushing parents.

Now in its 10th year, the 5K race was born when Brian Webster and his wife, Diane, arrived at Christ Church of Arlington, where Brian serves as pastor. Diane had organized a turkey trot back in Texas, and they transplanted the tradition to the streets around the church. The first year, the fundraiser attracted 300 runners. Last year, 4,000 trotters raised more than $65,000 for five local charities, including the Arlington Food Assistance Center and Doorways for Women and Families.

A recent church poll found 80 percent of participants saying that they “trot for fun.” But the chance to make room for pumpkin pie while supporting local causes is certainly a satisfying side benefit. 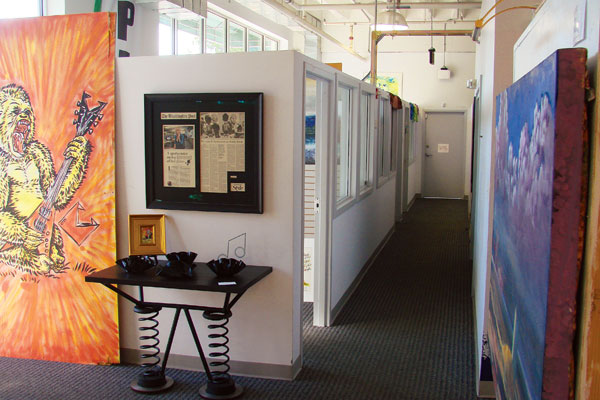 “It’s kind of like a mini Torpedo Factory,” says Tom Gittins, describing the newly opened Jefferson Street Artists in Falls Church. Located at 205 W. Jefferson St. and occupying a former print shop, the industrial space now houses Gittins’ business, Art and Frame of Falls Church, along with 20 artists’ studios. So far, eight studios are occupied by tenants ranging from mixed-media artist Sajeela Ramsey, who works with vintage materials, to the mother-and-son team of McLean author Michelle Spady and cartoonist Bradford Spady. A jeweler, watercolor painter and photographer are also part of the mix.

Gittins says he has always appreciated the creative process. It started with his parents. “I picked up framing from my dad, who framed things for my mom, who is a great artist,” he says.

Visitors to Jefferson Street Artists are welcome to chat and view work, and some studios offer pieces for sale. Most of the artists are in residence during First Friday events, held on the first Friday of each month from 6-8 p.m.