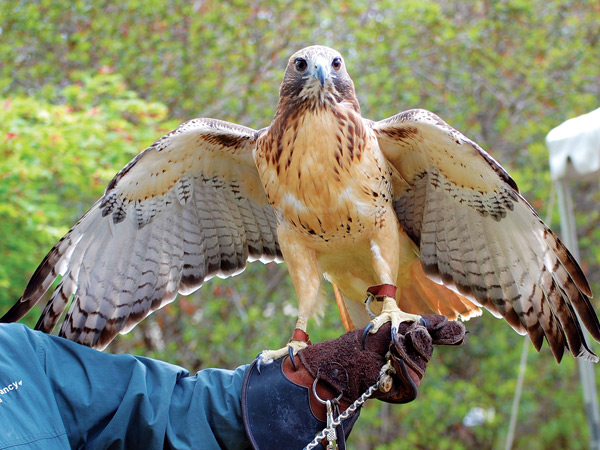 Birds of prey pose a majestic sight in the summer sky, but June is a time when chicks learning to fly tend to suffer crash landings. Though the juveniles can glide, they sometimes find themselves grounded and unable to get airborne again. “They’re teenagers. They make mistakes,” explains Kent Knowles, president of the Raptor Conservancy of Virginia, headquartered in Falls Church.

Last year, the Conservancy rescued some 50 juvenile birds from local parks and backyards, raised them and then released them. The most common rescues in Arlington are red-shouldered hawks, which grow to a foot and a half tall, and barred owls, identifiable by their white stripes, Knowles says. The group has also saved great horned owls, red-tailed hawks and Eastern screech owls. Anyone who finds a wayward owl or hawk chick can call the Raptor Conservancy at 703-578-1175. www.raptorsva.org 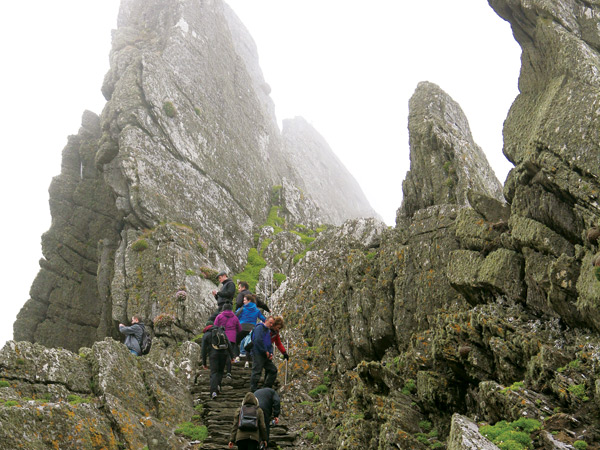 Spoiler alert: The final scene of Star Wars: The Force Awakens finds a certain Jedi knight in exile on a remote and craggy island marked by rickety stone staircases and sheer cliffs. How did this surreal location wind up in the film? Just ask Clarendon resident Trina Vargo, who founded the Arlington-based US-Ireland Alliance in 1998 after spending a decade working on the Northern Ireland peace process as an adviser to Sen. Ted Kennedy.

When J.J. Abrams was named to direct the latest blockbuster, Vargo’s group teamed up with the Irish Film Board to pitch Ireland as a filming location. As a result, the movie’s final scene was filmed over three days on Skellig Michael, a tiny rock off the coast of County Kerry. And let it be noted that the ancient stonework in the sequence is the real deal, not CGI; it was constructed by monks who moved to the island between 600 and 800 A.D.

Vargo is tight-lipped about any future Star Wars developments, but notes, “The movie ends [in Ireland], so presumably the next [episode] will pick up there.” www.us-irelandalliance.org 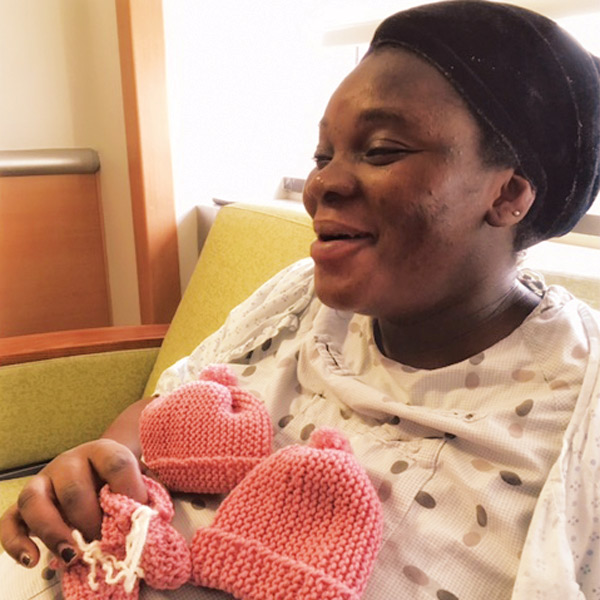 Emelia, a new mom of twins.

If you’re pregnant and confined to bed rest in your third trimester, it’s hard to relax. There’s just so much to do before the baby comes. Enter Project Knitwell, an Arlington group that shares the therapeutic benefits of knitting with people under stress. “They’re in this stressful pregnancy and they can’t get the nursery ready. They want to do something tangible,” says Michelle Maynard, executive director of the nonprofit. “Making a baby hat can be very soothing and calming.” (Or make that three, considering moms expecting multiples are often the ones who end up hospitalized.) To ease the learning curve for knitting newbies, the group provides an instructor and a starter kit consisting of yarn, needles and the first few rows of a project already completed. Now in its sixth year, Project Knitwell offers classes at Virginia Hospital Center and at Borromeo Housing, a residence for homeless young mothers. “Knit, purl, knit, purl—it’s like the beat of a heart,” says one participant. Now breathe. projectknitwell.org 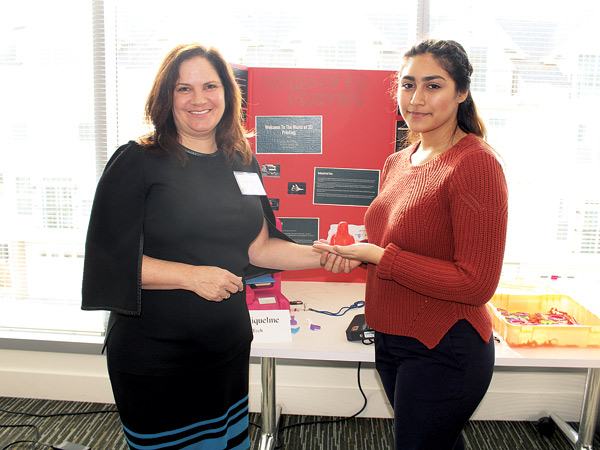 Washington-Lee High School senior Yemina Riquelme has always loved art and science. Now, thanks to a STEM internship sponsored by the D.C.-based Urban Alliance, she’s combining the two while gaining real-world experience in 3-D printing. As an intern at Virginia Tech’s Northern Virginia Center MakerLab in Falls Church, Riquelme troubleshoots printer jams and teaches beginners to use the technology, which has vast potential. “3-D printing applies to a lot of things,” she says, “like the medical field, art, food and especially NASA. They want to start serving 3-D printed food in space!” (A lover of comics, Riquelme has also used the machines to sculpt figurines of superheroes like Wolverine and Groot.)
The Urban Alliance currently has STEM interns working at Evolent Health, Arlington Free Clinic, Bloomberg BNA and other sites in Arlington. Interns start at $9 per hour and are eligible for two pay increases over the course of one year. www.theurbanalliance.org 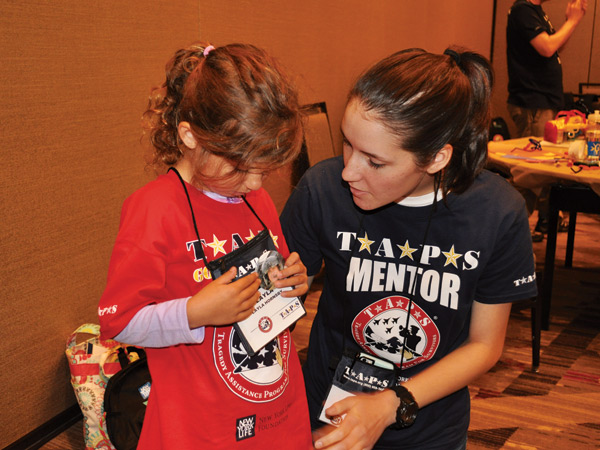 A TAPS camper and mentor

Arlington is home base for TAPS (Tragedy Assistance Program for Survivors), a national nonprofit that supports those who have lost a loved one on active duty in the armed forces. So it’s only fitting that every Memorial Day weekend, the organization hosts a three-day Good Grief Camp for kids who have lost a parent or sibling in military service. “For these families, every day is Memorial Day,” says TAPS manager Kelly Griffith.

This May, 500 campers from across the U.S., ranging in age from 4 to 19, will be paired with 500 adult mentors (current or retired military members) at the Crystal Gateway Marriott for the camp’s 22nd annual gathering. According to Griffith, the mentors often get as much out of the program as the kids. “Many of them have lost battle buddies [and] find healing during the weekend,” she says. 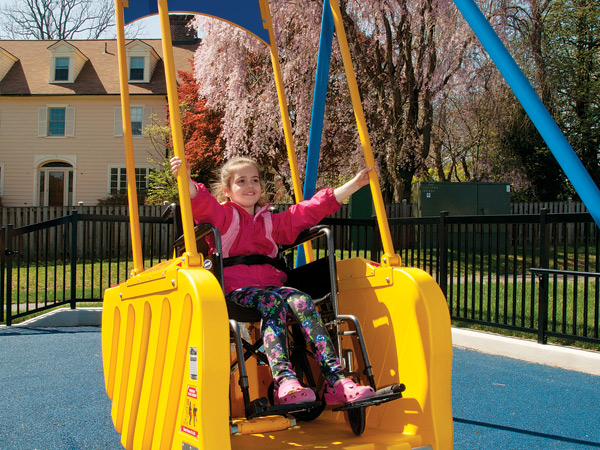 The Liberty Swing at Clemyjontri Park

One Facebook user calls it “the Holy Grail of all playgrounds.” The website Early Childhood Education Zone named it one of the top five playgrounds in the United States. This McLean jewel has a whimsical name—Clemyjontri Park—but its purpose is thoughtful. Located off Georgetown Pike, the two-acre park is outfitted with everything from a drum circle and a maze to a carousel. And it’s designed for children of all abilities. Among its accessible features is a swing introduced in 2010 that can be used by kids in wheelchairs—the first Liberty Swing in the state of Virginia.

The playground was the dream of philanthropist Adele Lebowitz, who sold the land to Fairfax County in 2000 for one dollar. (“Clemyjontri” is an amalgam of the names of her four children: Carolyn, Emily, John and Petrina.) Lebowitz passed away in 2014, and her family home, which adjoins the park, is currently empty. According to Fairfax County planning documents, the house and gardens will eventually become part of the park. Clemyjontri’s carousel opens for weekend rides on April 2, and is open daily starting May 31. friendsofclemy.com