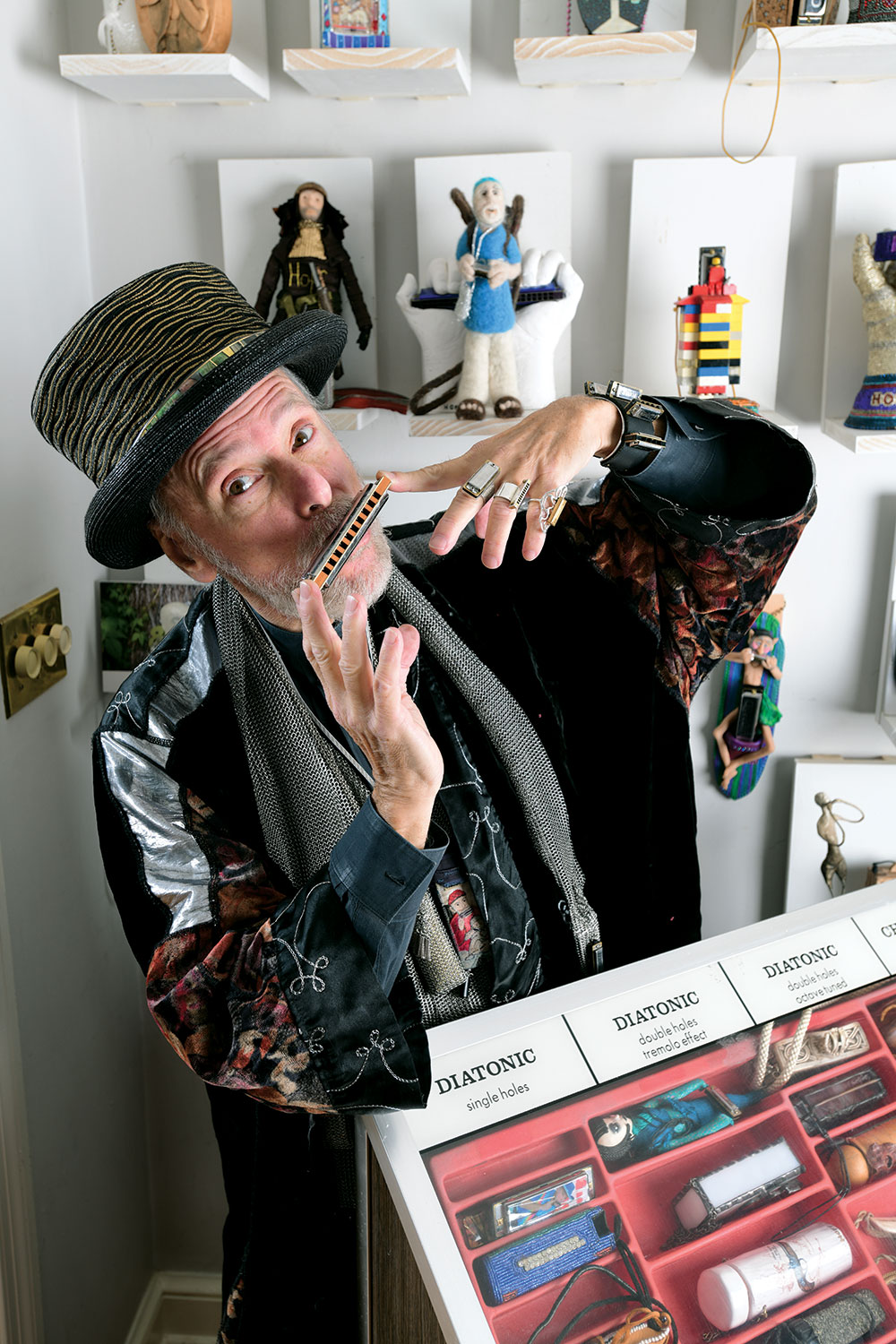 For Bob Hoffman, it’s not what’s inside that counts so much as the case that holds it. The Arlington resident, who goes by “Hoff,” is the proud owner of what is believed to be the world’s largest collection of harmonica cases, topping 500.

Each one is a handcrafted piece of art. He’s got cases made out of bicycle parts, dominoes, Legos, zippers, a Civil War-era gunpowder tin and a real alligator head. There are cases shaped like a necktie, a teapot and a mini-pinball machine. One was 3-D printed. Others double as a whiskey flask, a bong and a kaleidoscope.

“I’m an average harmonica player,” says the 72-year-old, who lives with his wife, Dianne Modell, in Tara-Leeway Heights, “but in terms of harmonica cases…there’s no one else even close.”

Invented in 19th-century Europe, the modern harmonica (aka “mouth organ”) was introduced to America by immigrants and quickly gained popularity as a portable form of entertainment. It was a common companion for Civil War soldiers around the campfire, and legend has it that Lincoln could play with the best of them. Since then, it’s been embraced by countless musicians—from blues legend Little Walter to folk icon Bob Dylan, who popularized the sound in his 1963 hit “Blowin’ in the Wind.”

A retired lawyer who worked for AARP, Hoff started playing the harmonica in his mid-50s. Even though it’s a small instrument, he says carrying it in his pocket felt clumsy and inaccessible. So he commissioned a bead artist he met at the 2004 Smithsonian Craft Show to make a special case that hung around his neck.

Soon that, too, posed a problem. “I was wearing [colors] that [were] clashing with the case. It didn’t fit my wardrobe,” Hoff says. “I decided that I should have one for all of my outfits.”

Thus began nearly two decades of collaborating with artists—whom he’s discovered at art festivals, craft shows and via referrals—to create more than 525 (and counting) personalized harmonica cases. In that time, the collection has garnered a modicum of fame, having been featured on NPR and the BBC. In 2011, it was displayed at the now-defunct Artisphere in Rosslyn.

“It’s given me a wonderful hobby…or obsession, if you listen to my wife,” Hoff says.

He does maintain a few artistic “guidelines” for the cases. Each one must fit a standard-size harmonica, be designed to be worn like a necklace and feature his nickname. He prides himself on paying a fair price—as much as a few hundred dollars per case—knowing that each piece takes time, care and skill to create. “I respect the fact that [artists] are trying to make a living creating art. The end product, I always like. Always.”

The quest for more is keeping plenty of artists busy. Hoff estimates that he has another 25 to 30 cases in the works.

Of course, he does have his favorites. The case he wears most often features a cross-stitched image of Hoff with his then-6-month-old grandson, Ethan (now 6), playing harmonica together. It was created in 2012 by local fabric artist Jamie Langhoff, whom Hoff first encountered at D.C.’s Eastern Market.

“Hoff is a very charming and convincing character,” says Langhoff, who normally focuses on landscapes but was persuaded in this instance to do a portrait. “I never imagined that I’d be requested to make a harmonica case.”

Someday we’ll all be blowin’ in the wind. Upon his death, Hoff plans to donate a majority of the harmonica cases to free museums in New York, D.C. and Vermont, where he spends his summers.

The remaining few will go to family and friends, with a keepsake inside. “Each [person] is going to get one,” he says, “with my ashes in it.”