For years, I mostly swore off television. Then I encountered a series with a plotline that hit close to home. 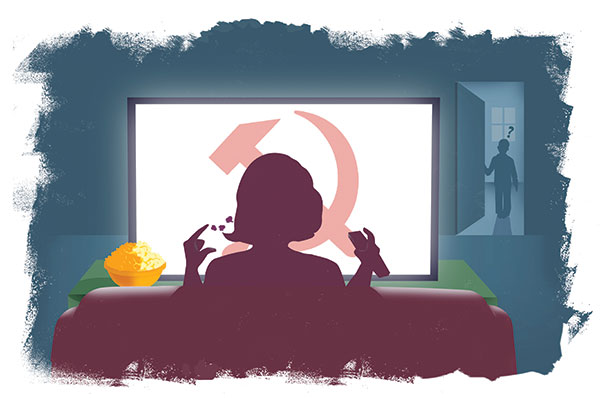 After growing up hooked on Happy Days and All in the Family, I kicked my TV habit. Sitcoms, dramas and everything else the medium offered struck me as a waste of time once I became a politically aware college student addicted to print and public-radio news.

Fast-forward to today, and opting out of television has certainly made it easier to shield my kids, now 9 and 10, from excess screen time. But my unfamiliarity with pop-culture references to everything from Game of Thrones to American Idol has, at times, left me feeling like an outsider.

So how did I end up binge-watching the first four seasons of The Americans last summer?

For the uninitiated, the FX series revolves around two Russian sleeper agents masquerading as a humdrum Falls Church couple in the 1980s. Posing as the innocuously named Philip and Elizabeth Jennings, these spies—played by Matthew Rhys and Keri Russell—run a travel agency in Dupont Circle. Armed with masterful English and a predilection for meatloaf, they deceive everyone they encounter, including their own children, who have no idea that their parents are KGB operatives. Philip and Elizabeth even hoodwink a neighbor who works for the very FBI division that is hunting for Soviet “illegals” just like them.

That the show’s storyline takes place so close to home was enticing. So was its cultural and historical backdrop, which coincides with the years when I came of age. What’s more, the Cold War plot that unfolds in the series is based on true events that played out long after the 1991 collapse of the Soviet Union. In the summer of 2010, our government busted and expelled 11 deep-cover spies, including three who lived in Arlington: Mikhail Semenko, a travel agent fluent in Russian, English, Spanish and Mandarin; and Mikhail Kutsik and Nataliya Pereverzeva, a couple using the aliases Michael Zottoli and Patricia Mills. (The husband-and-wife team had recently relocated from Seattle, where he worked as an accountant and she stayed at home with their young children.)

Truthfully, I’d been tempted to watch The Americans ever since its 2013 debut, but there was always something more urgent to do. Aside from my job running an editorial service at a think tank, there were school forms to fill out, math concepts to illuminate, meals to make and laundry to fold. Someone was always outgrowing their sneakers or getting strep throat.

In retrospect, I now see that the show’s protagonists—whose kids are 10 and 13 when the series gets underway—also struggle with work/life balance, albeit in a twisted reality. Philip has trouble mustering the energy to haul his son to hockey practice after a long night spent wooing an FBI secretary. Elizabeth scrambles to get dinner on the table when she’s busy bugging Caspar Weinberger’s home office. (Their occupational need for absolute privacy requires shunning household help and babysitters while pursuing two careers.) In many ways, the show is just as much about the challenges of parenting and moonlighting as it is about international intrigue and gunslinging.

I might never have found the time to view those 52 episodes had I not unexpectedly gotten downsized from my job in the spring of 2016. Or had my mother, a small-screen devotee, not mentioned that my cousin Peter Jacobson had been cast in The Americans. Peter and I were never close, but I have checked out his performances on TV shows like House and Law & Order over the years, and I loved how he voiced Acer the Pacer in the Pixar movie Cars 2.

This combination of newfound free time, my personal connection to one of the actors and my longstanding curiosity about the show overwhelmed my usual TV abstinence. Before long, I succumbed to chronic binge-watching.

After careening through the first two seasons on DVDs borrowed from the Arlington Public Library, I saw that 45 other library customers were ahead of my Season 3 hold. So I bought the disks from Best Buy and then streamed Season 4 through Amazon.

The show has too much sex and violence to screen in front of children, and I knew I’d never find a new job by lounging around staring at the TV all day, so my viewing hours were restricted to after the kids fell asleep. Because I generally had trouble stopping after fewer than three episodes, this often meant staying up way too late.

Upon finishing Season 4, in which my cousin Peter begins to portray FBI Agent Wolfe, I felt like I’d completed my own covert operation.

Researchers suspect that binge-watching, a relatively new phenomenon, is bad for your mental health. This is surely true, although I found that tearing through The Americans also imparted some healthy perspectives. Even on my worst days, I’m grateful that no one is ordering me to don a disguise and seduce strangers. And regardless of where my next career move may lead, I’ll never need to murder people who are in the wrong place at the wrong time. Figuring out how to start over professionally sure beats having to ponder defecting—a point of contention for Philip and Elizabeth in the pilot episode.

In the show, the protagonists’ assumption of fake identities means that they have virtually no contact with any relatives in “the motherland.” Those severed affinities leave them unsure of where they belong, engendering a hollow alienation that deepens as the plot advances.

That perspective has made it easier for me to accept my own frayed ties with Peter and other relatives. He’s a funny guy with a son a few years older than my kids, but our children have never met. We now follow each other on Twitter, so he could probably pick me out of a lineup, but that’s not something I can say about many of my other cousins.

I used to regret the broken branches of my family tree—largely the result of geographical divides, messy divorces and diverging spiritual choices. After watching the show, I am thankful that I also have no shortage of authentic relationships with closer relatives.

I’m looking forward to the next season of The Americans. When it gets underway, every new episode might remind me why TV can be worthwhile. And that I’m no outsider.