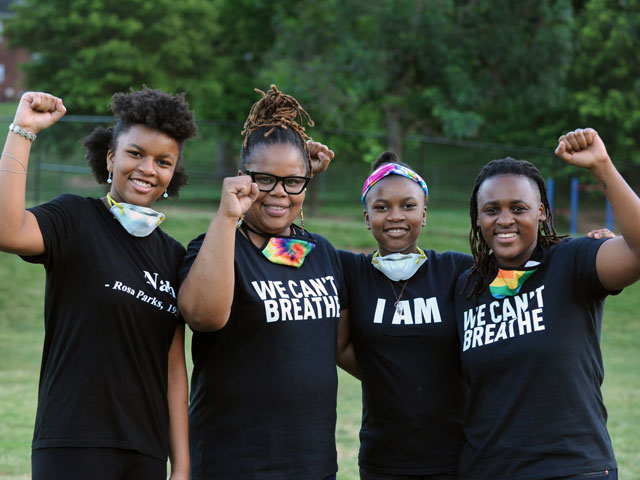 In late May, as outrage over George Floyd’s killing in police custody roiled the nation, Anika and Yolande Kwinana decided they had to do something.

Anika, 49, a program manager in the Kennedy Center’s education division, and Yolande, 28, a business development associate for Salesforce, had volunteered for political causes. But they had never led a protest movement.

Then the demonstrations against police brutality and racism spread to Washington, D.C., and the Kwinanas, a married couple who live in Arlington, found themselves at odds about whether to participate. Yolande, anxious and restless, wanted to join the throngs who were pouring into the District. But Anika, who once worked as an AIDS and HIV educator in South Africa and had seen viruses kill people, was wary of wading into large crowds and possibly exposing her family to the coronavirus.

They decided to organize a smaller demonstration themselves, in Arlington.

So, on May 31, Yolande put out a call on Facebook. She invited fellow Arlingtonians to meet at the Shirlington Branch Library to “take a knee” for Floyd, who died after a Minneapolis police officer knelt on his neck for almost nine minutes while he was handcuffed on the ground.

An Arlington police detective saw the post and sent a text asking what the local police force could do to help—a move that surprised and gratified Yolande. “Definitely a ‘wow,’ ” she says. The ACPD ended up providing snacks and water for demonstrators. Nearly 200 people showed up.

The next day, Arlington County police officers were sent into D.C. at the request of U.S. Park Police, in accordance with a long-standing mutual-aid agreement to provide reinforcements when needed for public safety. When Park Police deployed chemical gas and other methods to forcefully remove peaceful protesters from the area around St. John’s Episcopal Church so President Trump could pose for a photo with a Bible in his hand, a community-wide outcry ensued.

“We paid for them to go and do that! Our tax dollars!” Anika says indignantly. Within hours, the Arlington County Board had ordered its police force out of the city.

In the days that followed, the Kwinanas would go on to organize several other protests and vigils in Arlington—always urging demonstrators to wear masks and practice social distancing. One march, from the Columbia Pike Branch Library to Courthouse, on June 6, drew 1,000 people.

“It was majority white people who came out, which is surprising but really encouraging,” Yolande says. “People in positions of privilege need to be the biggest voices.”

Political activism isn’t new to the Kwinanas. Anika says hers began “in my mother’s tummy” when her parents participated in anti-apartheid protests at the South African Embassy in Washington in the early ’70s. Growing up in Oakland, California, she helped her parents campaign for Democratic congressman Ron Dellums and Gov. Jerry Brown.

Locally, she has registered voters and stood outside polling places urging support for Democratic candidates.

Yolande grew up in South Africa and helped run campaigns for student government at the University of Fort Hare. She and Anika met in church in South Africa in 2013, fell in love and had a long-distance relationship until Yolande was able to move to the United States. They got married in 2016 and are raising Anika’s daughters from a previous marriage—Mayah, 12, and Jada, 14—in Arlington’s Columbia Forest neighborhood.

As the summer wore on and the national conversation on racial equity continued, the Kwinanas pivoted their focus to Arlington County policing.