Birthday parties for Fido are turning into big business.

When Becky Baines wanted to celebrate the fifth birthday of her Boston terrier/pug mix, Bob Barker, she didn’t just throw him a bone—she threw him a party. A big one.

On a recent Sunday, 24 people and nine dogs converged on Frolick Dogs, a canine gym in Alexandria. As the party got underway, a large bulldog named Otto followed a toddler, Jacob, back and forth on a balance beam. A yellow Lab named Tyler kept chasing several puppies as if telling them to break it up. Another dog took his “pupcake”—chicken meatloaf with mashed-potato frosting—into the middle of a 20-foot tunnel to chow down in private.

Bob Barker spent most of the afternoon hanging out near the food table, content to wear a party hat and keep an eye on the festivities. And the people? “Anytime you can mix activities for dogs with friends and alcohol, it’s a win-win,” says Baines, who lives in Ballston. “We had a great time with people and pets, and the entertainment was right in front of us.” The price tag: About $200, including Frolick Dogs’ $80-per-hour rental fee and the refreshments Baines brought in. 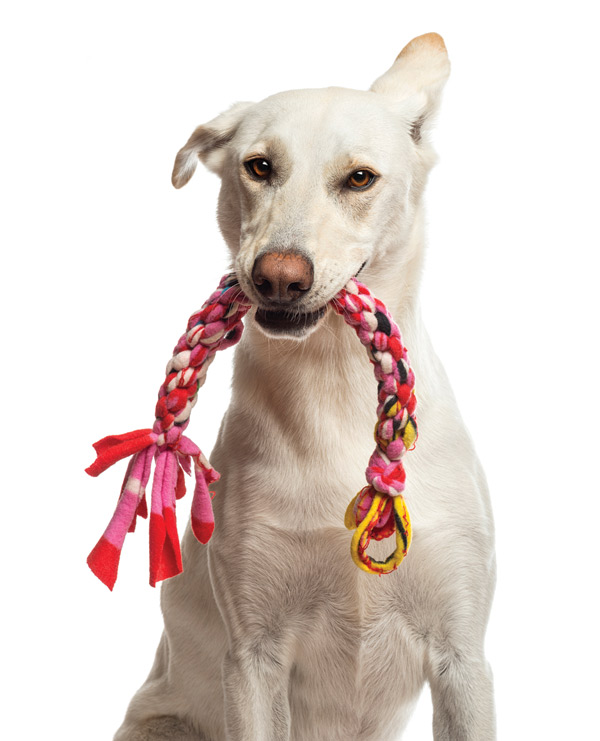 Arlingtonians love their dogs, though the pet-pampering trend certainly isn’t limited to our area. Last year, Americans spent more than $60 billion on their pets, according to the American Pet Products Association—more than triple the amount spent in 1994. And the category increasingly includes items beyond essentials like food and veterinary care. A 2015 Harris Poll found 52 percent of dog owners nationwide saying that they had bought birthday presents for their pooches. Some, like Baines, are expanding on that theme.

“We are seeing more people doing birthday parties for their pets,” says Sheila Raebel, owner of Dogma Dog Bakery & Boutique, which has locations in Shirlington Village and in the Garden City Shopping Center on Lee Highway. “It’s a social thing for people as well as the dog.”

Sometimes it’s a social thing for people more than for the dog. Kristina Robertson, owner of Barkley Square pet services in Alexandria and Falls Church, says she has planned parties for people who are doggone determined to get a leg up: “Like ‘I’ve got to one-up the Joneses,’ ” she says. “We did a ‘celebrity’ birthday party with someone who’d been on [a reality show] and her dog. It was a pool party—Dolce & Gabbana—the works. She hired us with a doggie pool near the real pool and a dog cake and pupcakes for all the dog guests.”

Though few take it to that level, party planners like Robertson note that child-free folks often see a pet’s birthday as a great excuse for a get-together. At the same time, parents are happy to indulge children who want to celebrate their dog’s birthday in a special way. (Robertson has orchestrated parties with games such as Red Rover, relay races and musical chairs in which humans get dogs to jump up by themselves.)

In population-dense areas along Metro’s Blue and Orange lines, where condos and apartments abound, a dog-centric party is also a good way to get people and animals outside having fun.

Witness the case of Oreo, a 30-pound Tibetan terrier who lives in Ballston with his owners, Courtney and Ron Benedict. For Oreo’s first birthday, the couple gathered some neighbors, carried a tall table or two to the fenced side yard of a nearby building and set up hors d’oeuvres and wine. At least 10 dogs and 15 to 20 people socialized on a lovely August evening, and the dogs went to town on a blue-frosted birthday cookie from Unleashed by Petco.

“Most of the people I know in the neighborhood are because they have dogs,” says Katelyn Moomau, who lives in Ballston Park and attended Oreo’s party with her bichon frise, Max.

As head of her condo building’s social committee, Moomau is now replicating the concept. One recent “yappy hour” had to be moved to the loading dock due to rain, she says, but no one seemed to mind—least of all the seven dogs who, along with 20 people, were happy to make merry on concrete.

“It was such a success that we’ll probably do it quarterly,” Moomau says. “We certainly think dogs bring people together.” 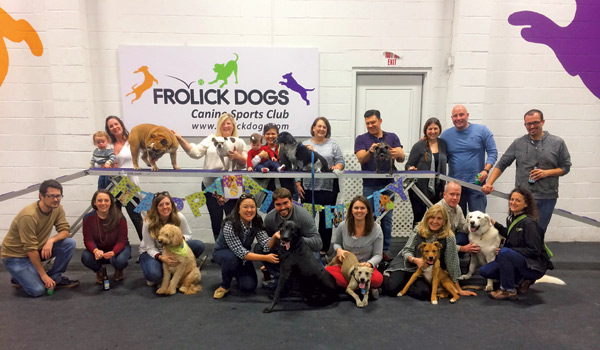 Scenes from Bob Barker's birthday party (here and below) 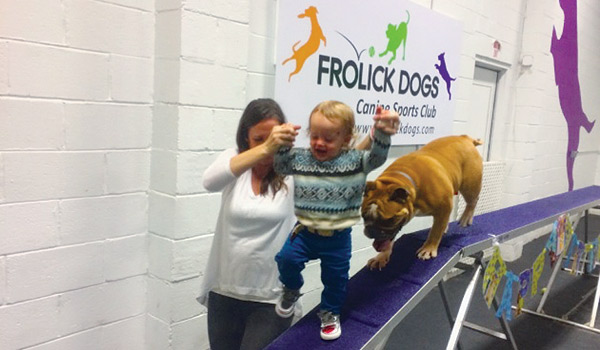 Dogs do act as a kind of social glue, agrees Stacy M. Lopresti-Goodman, associate professor of psychology at Marymount University. “By their nature, dogs kind of force us to interact with people and other dogs. Why not celebrate their life—and bring friends together to do it?”

Our culture has, in many ways, gone to the dogs. We have parties in their honor. We dress them up in costumes (whether they like it or not). We buy them gifts, seek out travel destinations that are pet-friendly, and plaster their photos and videos all over our social-media feeds. Some 38 percent of dog owners admit to cooking special meals for their dogs, according to the Harris survey. 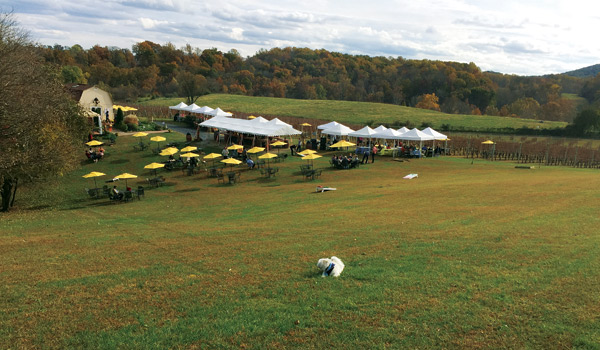 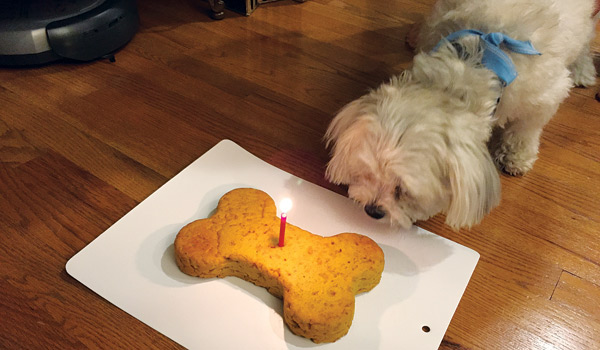 Why all the fuss? The shift toward a more pet-obsessed society is largely generational. Whereas Fido was once relegated to the doghouse, most of today’s pet owners (95 percent, according to the Harris survey) view their animals as family members and treat them accordingly.
To celebrate the second birthday of her shih tzu/bichon, Remy, McLean resident Sara Quinteros-Fernandez planned a road trip with her boyfriend, her parents and her favorite mutt to dog-friendly Three Fox Vineyards in Delaplane, ending the day with a bone-shaped cake at home. “We spoil him a lot,” she says.

In Arlington’s Rock Spring neighborhood, Hunter, a golden retriever, was receiving gifts from his owners, Steve and Tammy Rosen, long before their kids (now 6 and 8) came along. “Hunter always liked to unwrap his own presents on Christmas or his birthday,” says Tammy Rosen, who owns Fur-Get Me Not, a doggie day care, boarding and training outfit in Shirlington. “He was very delicate about it so he wouldn’t break whatever was inside.”

Though she and her family recently bid farewell to their beloved Hunter, Rosen says it makes her smile to see her clients carrying out similar rituals.

“Sometimes [they] say to their dog, ‘Now you get to pick out your present!’ ”

Wylie Wagg co-owner Laura Clark has witnessed the same phenomenon at her pet boutiques in Clarendon and Falls Church. “For some people, a trip to our store with their dog is a key component of the big day,” she says. “Many pet parents let their dogs ‘shop’ for presents.”
As the cartoonist Charles Schultz so often observed, “Happiness is a warm puppy.” Party on.

Already tripping over squeaky toys, tennis balls and other sundry dog items? “Another way to honor your pet’s life,” says Marymount University associate psychology professor Stacy M. Lopresti-Goodman, “is to make a donation to help another animal live to see its next birthday.”

Plenty of local residents are doing just that, by staging birthday-party fundraisers for their pets (during which they collect pet supplies or money to donate) or by donating to a shelter directly. In 2015, the Animal Welfare League of Arlington (www.awla.org) accepted more than 1,200 in-kind gifts (carriers, collars, leashes, food, towels, toys) and more than $57,500 in honor or memory of donors’ pets. AWLA doesn’t parse “honor,” but development database administrator John DeMarce says he assumes birthdays are included.

What Kind of Party?

What type of birthday celebration is best? A lot depends on the dog’s age and temperament, says Keri Putonen of Unleashed Abilities, a dog training service in Falls Church. Her advice for having a party that both dogs and their owners can enjoy:
–Match the guest list to the space. “Confined space can create conflict,” she advises, so keep it small and “invite dogs that you know have a similar play style.” If you want them to run around and get wild, choose a place with lots of room so dogs can get away from one another if they need to.
–Remove items that could prompt skirmishes, like bones, rawhide or a “cake” that’s meant to be shared by all. Doing so will lower excitement and anxiety levels.
–Consider human/canine activities. Exploration stations—agility equipment, hidden food, puzzles—are terrific socialization and keep dogs from fixating on one another.
–Don’t excite puppies. “They can act inappropriate or get scared. Take time out for a little puppy massage before more playtime.”
–Don’t excite children, either. “Overstimulated kids and overstimulated dogs is an explosion waiting to happen.”
–Do try cooperation games that pair kids with dogs in teams. “Puzzles are good, like where you have to figure out how to open a box or get through a door. Training a dog benefits both the dog and the child.”
–And if your dog isn’t into big gatherings? Skip the party, go for a walk, play in the yard or take a nap together. “It all comes back to what your dog enjoys,” she says.

No birthday party is complete without treats, but even a nibble of certain human foods can be toxic for dogs, warns Davina Catbagan, a veterinarian with Cherrydale Veterinary Clinic. Because of the difference in body weight, “a Great Dane might survive something that a Chihuahua might not,” she says. “That’s why a vet will ask you how much did they eat and how big is the animal.” No matter how irresistible those puppy eyes may be, there are some foods (and drinks) your dog should never have—birthday or not—according to ASPCA Animal Poison Control and WebMD:
✖ fat trimmings and bones
✖ raw meat and fish
✖ raw eggs
✖ avocados, guacamole
✖ grapes, raisins
✖ macadamia nuts
✖ milk, cheese,
dairy products
✖ pitted fruits
✖ baking needs (baking soda, baking powder, nutmeg, other spices)
✖ onions
✖ garlic
✖ chives
✖ salt, including
salty snacks
✖ yeast dough
✖ chocolate
✖ coconut water
✖ candy, cake, gum, toothpaste, etc. with xylitol (an artificial sweetener)
✖ alcohol
✖ caffeine
✖ human medicine
Keep the ASPCA Animal Poison Control center number handy (888-426-4435). The hotline is open 24/7, with a $65 charge that covers any callbacks.

Ellen Ryan is a writer in Rockville, Maryland, who always celebrated her dog’s birthday on St. Patrick’s Day.