Hankering for barbecue? Don’t miss these smokin’ hot spots where pigs (and a few cows) fly.

Purists will tell you that barbecue is not burgers and hot dogs on the grill, or even chickens on a spit. It’s pork shoulder, ribs and hock—spice-rubbed, slow-cooked and sometimes smoked over indirect heat. It’s messy, meaty and delicious.

And it’s steeped in tradition. “Barbecue was farm-to-table 300 years before [farm-to-table] was cool,” says barbecue history buff Laura Dove, who grew up in Falls Church and wrote her University of Virginia master’s thesis on the iconic cooking style.

In earlier times, Dove says, barbecue shacks were informal establishments that focused on local ingredients (namely hog) and the sharing of knowledge passed down through generations. By the 19th century, pig roasts had become a popular feature at church picnics and political rallies. “Barbecue was not a class-specific food,” she writes in her dissertation. “Large groups of people from every stratum could mix to eat, drink and listen to stump speeches.”

The pitmaster’s drum was also one of the earliest patches of common ground to attract an interracial following.

Ingredients and methods vary by region, of course, giving rise to many a squabble over what constitutes “true barbecue.” In North Carolina, chopped, sliced or pulled pork is served with a vinegar-based sauce; while in South Carolina and Georgia, the sauce is infused with mustard. Tomato-based sauces become sweeter with molasses as they travel west through Memphis, toward Kansas City and Texas beef country.

Though Virginia technically sits north of the Barbecue Belt (which begins at the North Carolina border and stretches west), it has its share of worthy pit stops, thanks to the many Deep Southerners who now call this area home.

What’s the best way to identify the good stuff? Authentic pork barbecue will have a visible “smoke ring” that permeates the meat, says Joe Corey, co-owner of Arlington’s Faccia Luna restaurant, who has judged the Memphis in May barbecue festival in Tennessee for the past 10 years. “Also, it should not fall off the bone,” he adds. “Ribs should have a tug to them when pulled apart.”

Chris George grew up in Memphis and spent 20 years in restaurant management positions across the country before returning to the cooking traditions of his youth. Craving a taste of home, he opened Memphis Barbeque last December near his house in Crystal City.

From its prime position on 23rd Street on the ground floor of the Buchanan apartment complex, the restaurant turns out tender spareribs and baby back ribs with a kicky sauce that George describes as a balance between sweet Kansas City and vinegar-spiked Carolina. He plans to begin bottling it later this summer.

Although its meats are prepared using traditional cooking methods, Memphis showcases its barbecue bounty in some nontraditional forms, such as beef brisket enchiladas and egg rolls stuffed with coleslaw and pulled pork.

This spring, Memphis Barbeque launched a mobile catering service with the capacity to serve up to 5,000 guests.

Hassan “Mo” Khalili decided early on in his career that he wanted to spend his days around people instead of machines. A native of Iran with a degree in hydraulics, he first turned to the pit during his undergrad years at the University of Tennessee. That led to 30 years of cooking professionally—the past 17 in Falls Church.

At Bubba’s, Khalili mixes a variety of sauces, including Kansas City, Tennessee and Carolina styles. He serves his meats un-sauced so patrons can choose their own tasting adventure.

Bubba’s does a robust business catering picnics and other events, and ships nationwide upon request. Hickory-smoked ribs and pulled Maryland-raised pork are favorites, as are the long-simmered collard greens, which have developed such a following that they’re sold by the gallon.

Loyal customers have shown their devotion by bringing Khalili hundreds of pigs in all art forms—including an oil painting that a fan once overnighted from New York City. He reciprocates by fostering a family-oriented environment filled with games, jokes and pictures of the local high school and Kiwanis teams that Bubba’s supports every year.

Rocklands’ wood-only barbecue uses just two types of wood chips—red oak and hickory—but its menu is more wide-ranging. The grill serves up options for both carnivores and non-meat-eaters, including salmon and veggies.

Still, owner and founder John Snedden, who has been orchestrating pig roasts ever since he was a student at Washington and Lee University in Lexington, lists the baby back ribs, grilled Italian sausage and chopped pork among his personal favorites. “We’re not trying to emulate any particular region, just create the best, unique barbecue around,” he says.

Rocklands is now a four-stop regional micro-chain with locations in Arlington, Alexandria, Rockville and the District.

Snedden’s signature sauce—rich with onions and vinegar—is one of four original sauces sold in Rocklands and other retail locations. Inside the restaurant, it’s joined on the shelves by dozens of hot sauces, including Rocklands’ own limited-edition “Barack Obama” chipotle blend, which was created to mark the inauguration of our 44th president.

The Arlington location on Washington Boulevard—a familiar landmark noted for its red truck mural painted by D.C. artist Jarrett Ferrier—has become a beacon for local barbecue enthusiasts. A new beer-to-go growler program is in the works, although Snedden is still reviewing potential brewery partners. The beer program evokes memories of the restaurant’s former location in Ballston, where it shared a roof with CarPool until 2005. 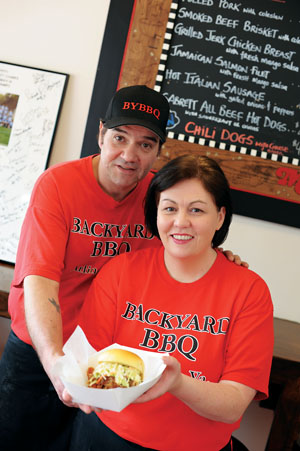 Michael Schmidt knows his cuts of meat. He cooked in several New York City delis, manned the butchery at Clyde’s in Reston and ran a catering business with his wife, Anne-Marie, for years. Then they discovered a space around the corner from their home in the Williamsburg neighborhood of Arlington and opened Backyard Barbeque and Catering in 2007.

There’s no fryer or freezer at Backyard. All of their suppliers are local, and that’s by choice. “We see how much fast food there is in people’s diets,” Anne-Marie explains. “Food doesn’t have to be high-fat to be takeout. Our meats just get a dry rub, nothing added.”

A quintessential mom-and-pop operation, the tiny, 10-seat eatery offers different styles of barbecue, including Alabama/North Carolina-style hand-pulled pork, and Texas brisket to satisfy an “intense” following from the Lone Star State. Mike makes his own vinegar-based sauce for customers to consider as a topper.

While the Schmidts still do some catering, the restaurant is now their main focus. It’s festooned with a flag mural painted by a neighbor, along with a collection of pig art and pictures of the football team at Yorktown High School, where their son, Liam, is a rising junior on the offensive line. (Backyard sells its pulled pork at the school’s snack bar during home games.)

On warm Saturdays, they often smoke a whole pig or cook half-chickens on the grill. “[The aroma] creates a buzz in the neighborhood and does wonders for business,” Anne-Marie says.

This homegrown chain now has franchises in eight states, but it began with a single location in Rosslyn, which opened in 1988. It all started when a group of friends—Wendell Moore, Joel Wood and GOP Rep. Don Sundquist of Tennessee—frustrated by the dearth of good barbecue spots in the area, decided to open their own. Another original investor was the late famed Republican strategist and blues guitarist Lee Atwater, who often dropped in to play with visiting musicians.

Salads and veggie burgers have crept onto the menu in recent years, but the main attractions are still the hickory-smoked pulled pork shoulder, sausage, beef brisket, ribs spiced with paprika and cayenne, and pulled chicken. Some of the meats are locally sourced.

“Local ingredients are cheaper to transport, fresher and support the local economy, which supports us,” says general manager Andy Blazejewski.

Red Hot & Blue sells its four sauces—ranging from Mojo mild to Hoochie Coochie hot—and its Memphis-style dry rub in its stores and online.

The Wilson Boulevard location chronicles Red Hot & Blue’s storied history with years of memorabilia on the walls. Blazejewski says the kitchen can cater events for as many as 5,500 but is just as happy to host the firefighters from Rosslyn’s Fire Station No.10 across the street, who count among its regular customers.

Proprietor Bonnie Mampe fell in love with barbecue back in the early ’90s while working in central Texas on the now-shelved superconducting super collider project. But the sauce she brews at Boss Hog’s—and sells in-house—is North Carolina-inspired.

The McLean eatery had been open for about four years when a newly transplanted Mampe took a leap and purchased it in 1998. She keeps the vibe cheerful and basic with diner stools, red-and-white checkered tablecloths and fresh flowers on the patio.

Hickory smoke permeates the seemingly infinite piles of Virginia-raised organic beef brisket and pork ribs. The staff brews its home-style tomato-based sauce in giant pots for up to seven hours, and sells it by the gallon.

Popular sides such as sweet potato soufflé, collards, creamed spinach and deviled eggs are also available to take away with advanced notice.

Brett Thompson and Heath Hall say they are just two guys trying to be entrepreneurs, and they’re having a really good time doing it.

The former Hill staffers from Missouri describe Pork Barrel BBQ as a hobby gone awry. What started as casual cooking for friends quickly turned into an operation that now distributes its savory, Kansas City-influenced spice rub nationwide. The duo also makes 25 stops a year on the national competitive barbecue circuit. They opened their first brick-and-mortar shop in Del Ray in late 2011.

“Barbecue is as much about community as the food,” Hall says, pointing to one of the restaurant’s coolest features—a communal table made of a giant piece of maple from the Eastern Shore. “Groups gather around, meet new folks and talk to neighbors, just like they would around the smoker,” he explains.

Relying on quality meat (much of which comes from Maryland producers) and a combination of oak and hickory smoke to let the rub do its work, the restaurant advocates sauces as an enhancement, but not a necessity.

To wash down the brisket and pulled pork, guests can grab vintage glass-bottled sodas—such as Dang! butterscotch root beer from Wisconsin and cherry Cheerwine from North Carolina—from ice-filled troughs.

Also on the menu: chicken, ribs, sausage, and  a  range of sides, including Texas caviar (marinated black-eyed peas).

For tailgaters and folks who like to grill at home, Pork Barrel retails its rubs, marinades and three sauces in area markets, along with barbecue-flavored peanuts and—get this—Que, a spicy and smoky cologne for “meat-lovers and grill masters.”

Jessica Strelitz is a food, wine and spirits writer and news geek living in Ballston. As a Maine native and Northern Virginia transplant, she’s dedicated to spreading the gospel of New England lobster and Virginia vino across the world.