They can't go to the playground, the party or the pool right now. But the Portner twins can picture themselves there. 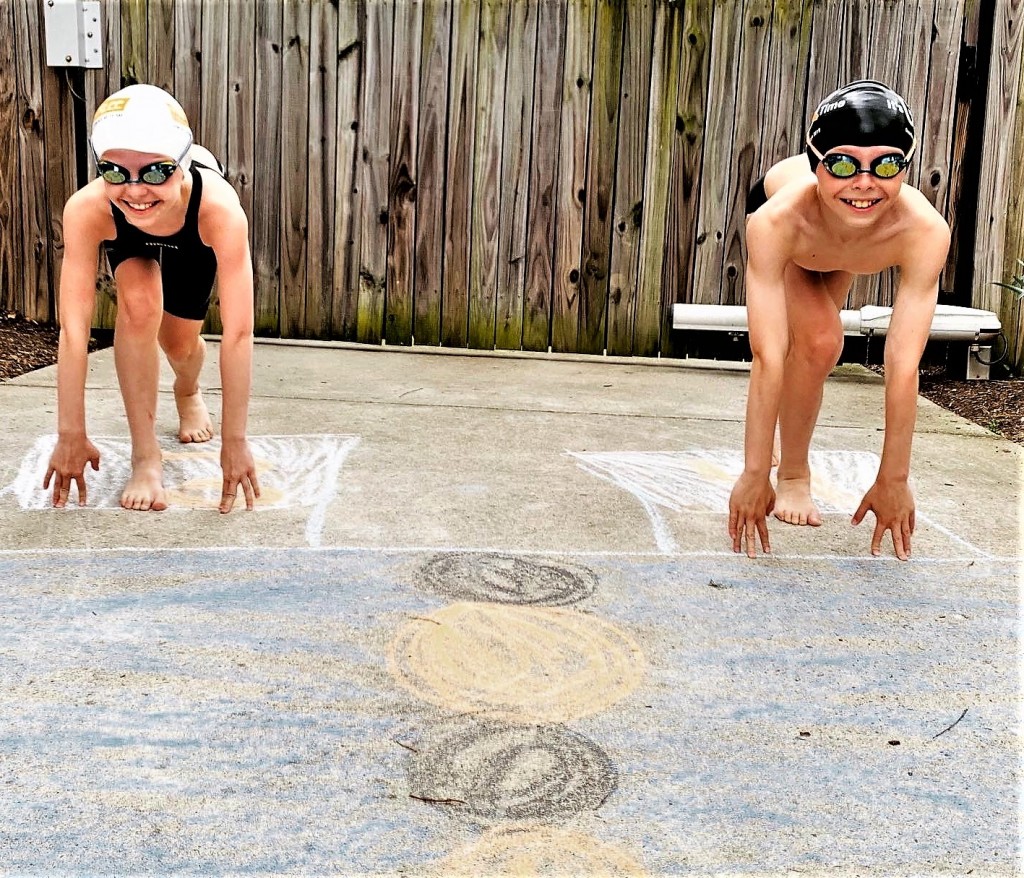 Audrey and Sully Portner reenacting one of their favorite summer activities

Arlington twins Audrey and Sullivan “Sully” Portner love their swim team and summer days at the pool. It’s one of the many activities they’ve been dreaming about during this period of quarantine captivity.

Recently the 10-year-old brother and sister decided to draw that happy place—the pool at Overlee Swim Club, complete with starting blocks and lane dividers—with sidewalk chalk outside their home in Overlee Knolls. Then they changed into swimsuits and goggles and asked their mom, Courtney, to take a picture.

Thus began a new tradition in the age of social distancing—a mural a day, each one commemorating something the kids miss and can’t wait to do again. The title of each work begins with the words “Longing for…” 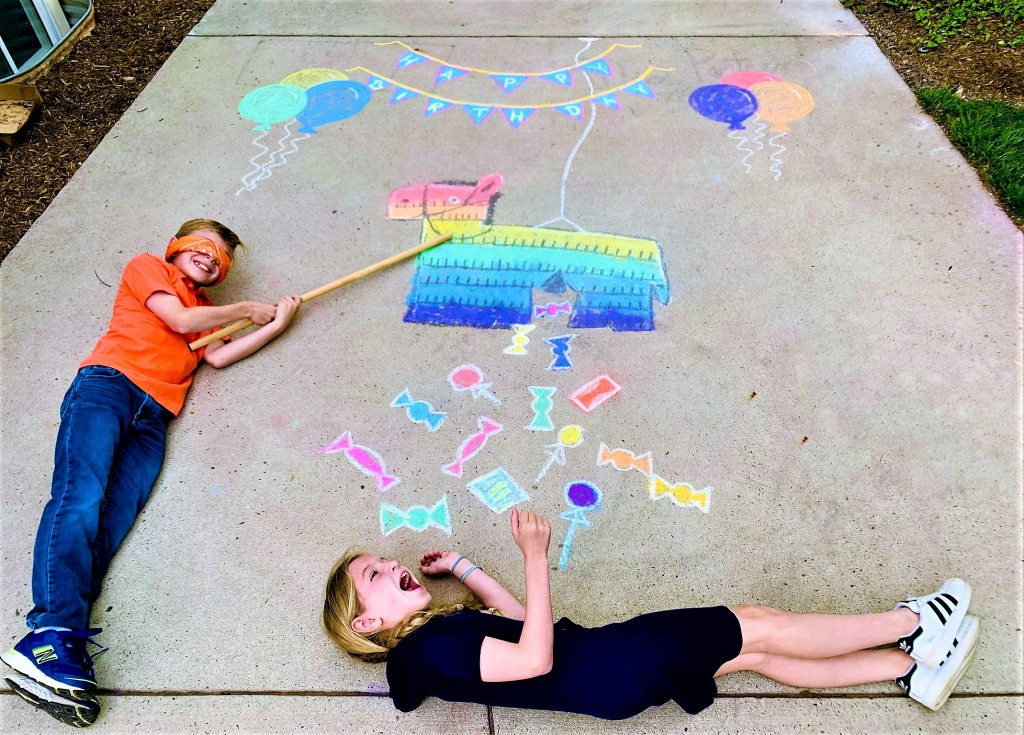 Their daydreaming has gone Technicolor as the twins, both fourth graders at the Langley School in McLean, have played starring roles in drawings of birthday parties with pinatas and friends. Sand castles at the beach. Amusement park carnival rides. Dance recitals and soccer games. Sleepovers at their grandparents’ house.

The driveway has become their blank canvas—a time machine to the life that’s been put on hold. 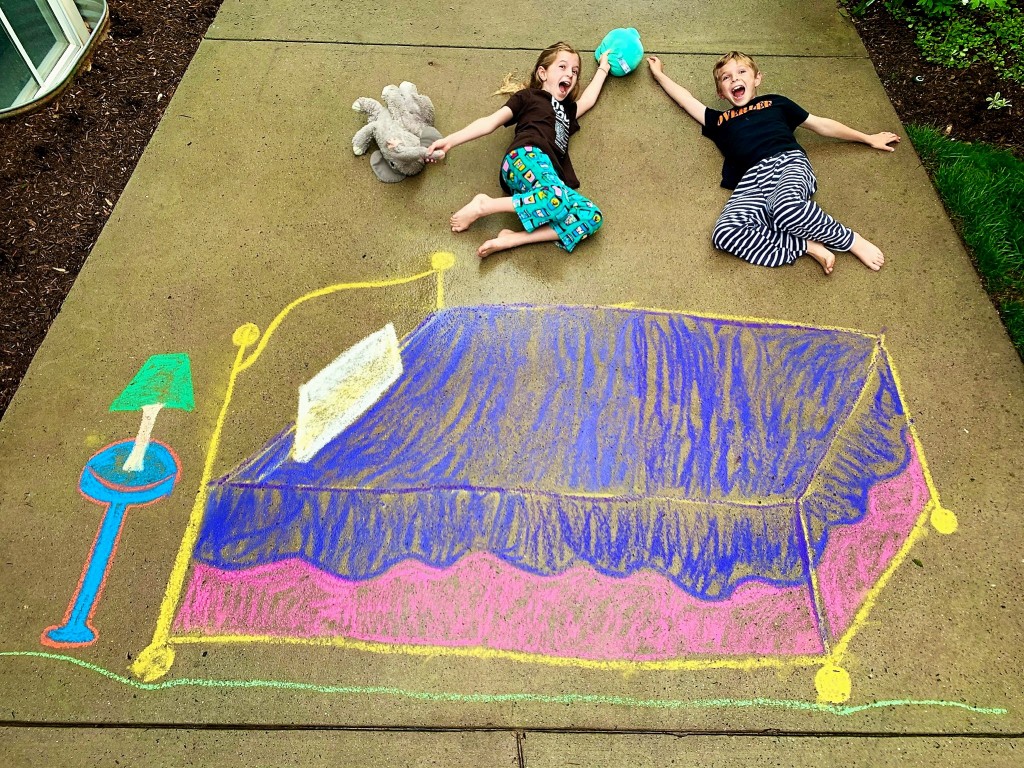 “We’ve been keeping a running list since we started the quarantine seven weeks ago,” says their mom. “Like other kids, ours were really looking forward to a lot of fun events, including our spring break trip. But there are so many other day-to-day things we didn’t realize they would miss—like seeing their teachers and coaches, getting a haircut, having some alone time.” 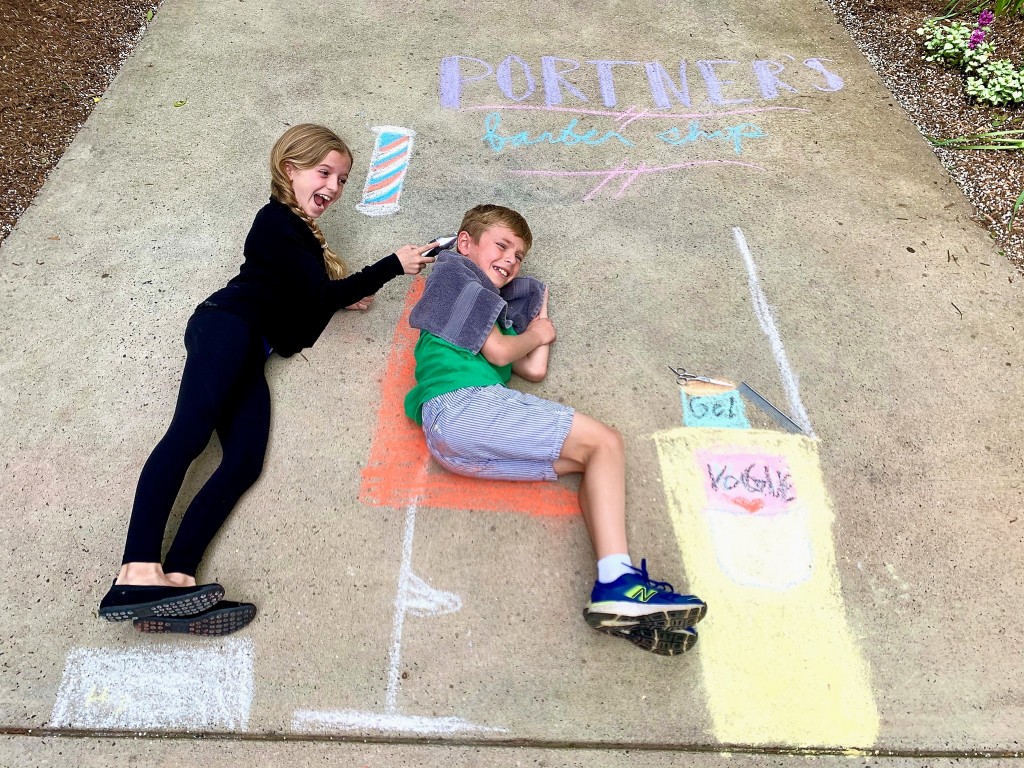 Each day’s artwork begins as a sketch on paper, which Audrey then outlines on the driveway. The coloring part is a team effort.  Sometimes their older sister, Hannah, an 8th grader at Williamsburg Middle School in Arlington, pitches in. 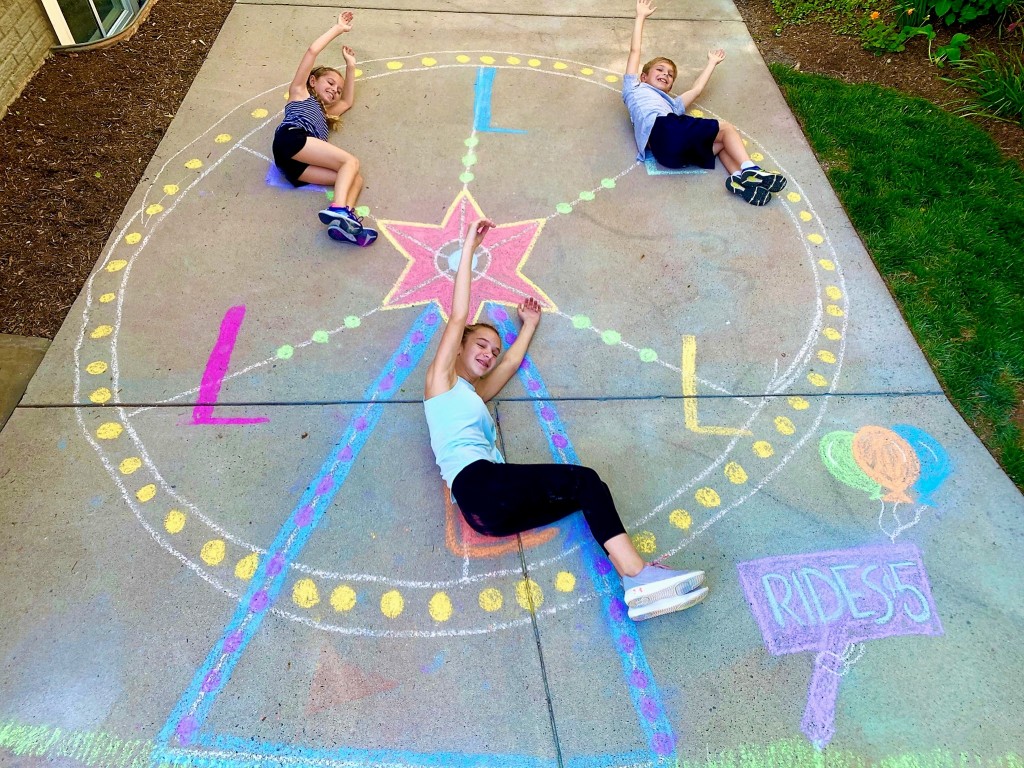 “It’s been therapeutic, too, because it initiates conversation about the things the kids are longing for,” Courtney says, “how they are feeling, memories of whatever they are drawing, and how we are hopeful that those missing things will be back in their life, hopefully sooner rather than later.” 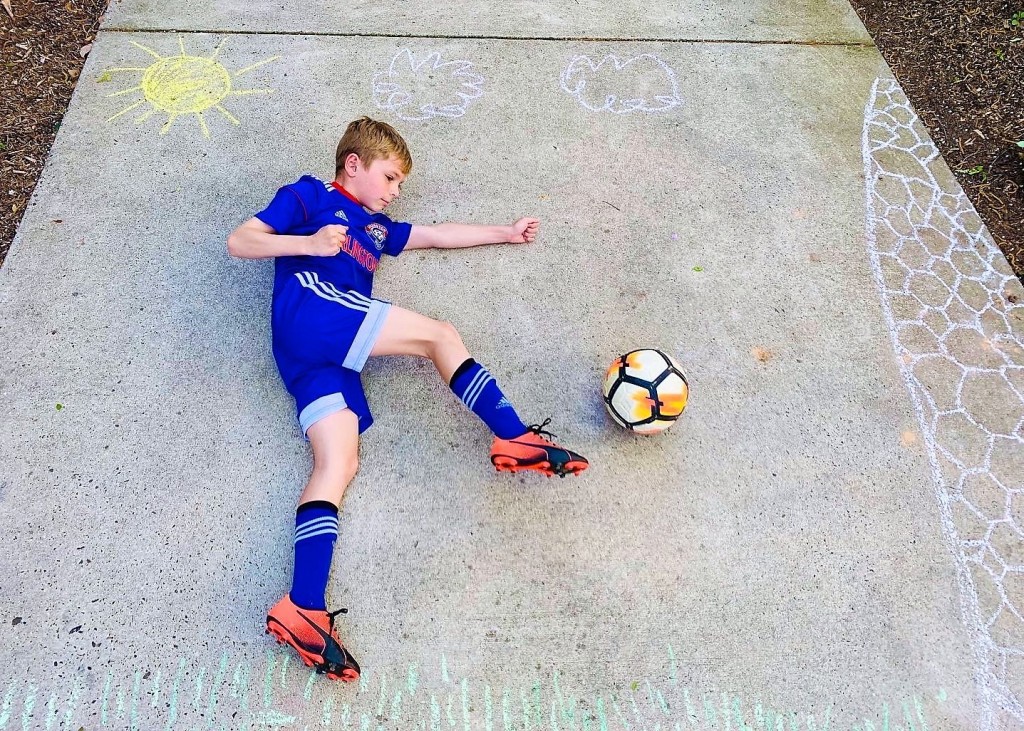 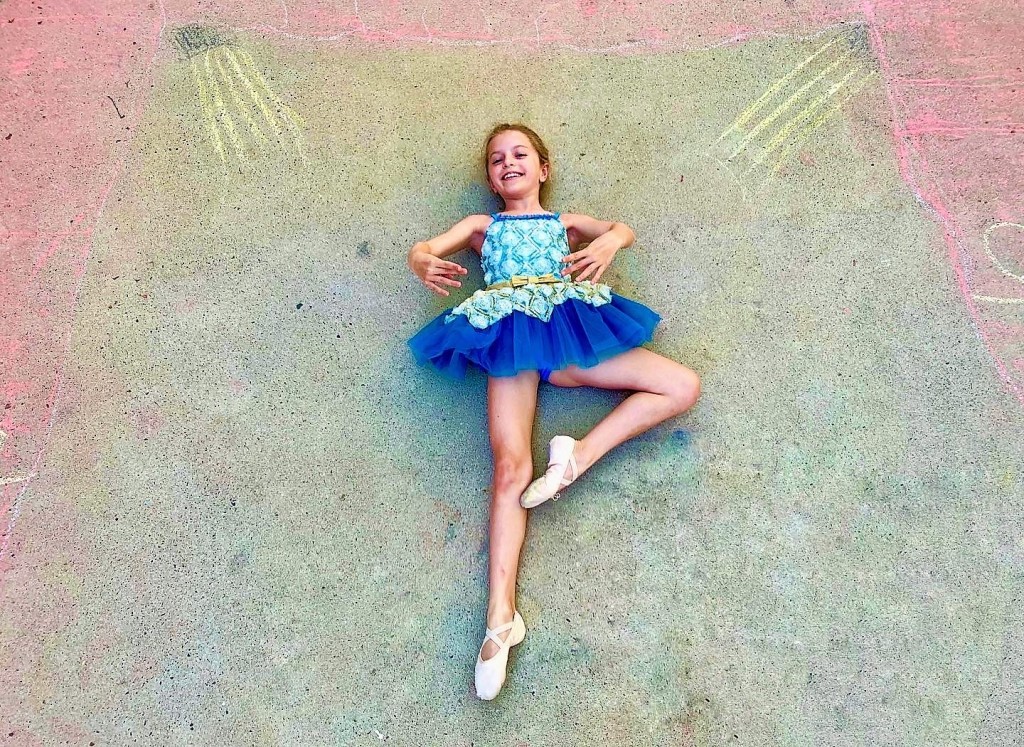 What’s their favorite scene to date? That’s an easy one. The unanimous vote is for “Take Your Child to Work Day,” which depicted all three kids, plus their dad, Greg, and the family dogs in a single freeze frame. 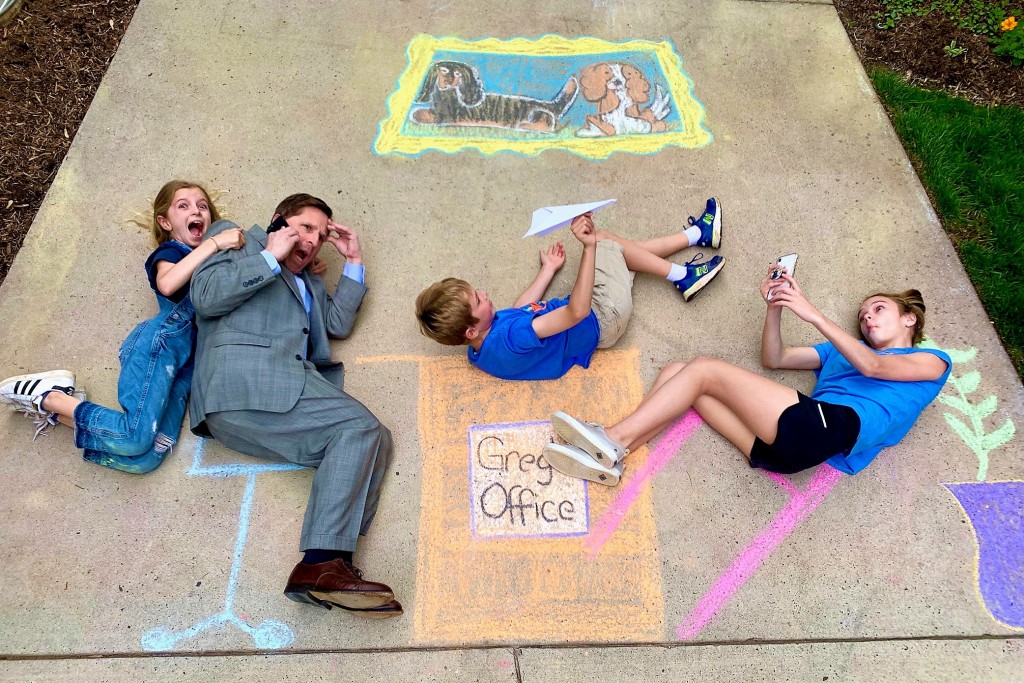 “The kids were thrilled when their dad came out in a business suit (an old one he found in the back of his closet) and proceeded to lie down in the driveway,” Courtney says. It provided a welcome bit of comic relief, and commentary on what has become the new normal for many families—parents working from home, kids engaged in distance learning, a scuffle of new routines, household chores, cabin fever and a whole lot of togetherness. 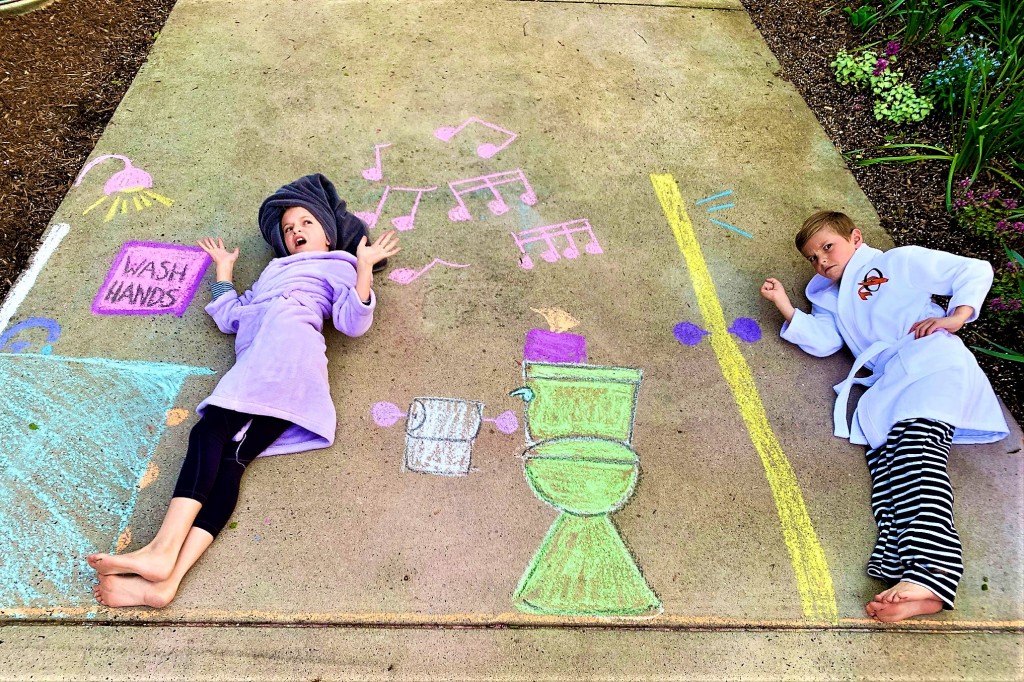 Some day, the Portner twins will be able to play with their friends again, not just wave at them through a window, or from six feet away. 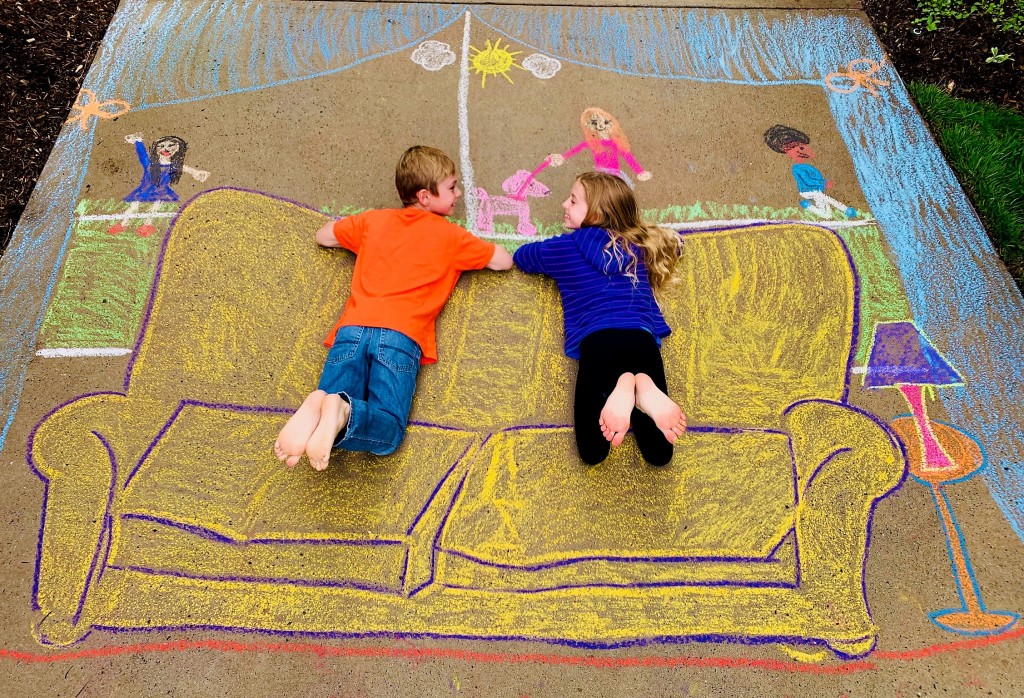 But for now there is sunshine and pavement, and chalk (which the family has mercifully been able to restock multiple times; it has yet to reach the gold status of disinfectant wipes and toilet paper).

And no shortage of daydreams to turn into driveway masterpieces. 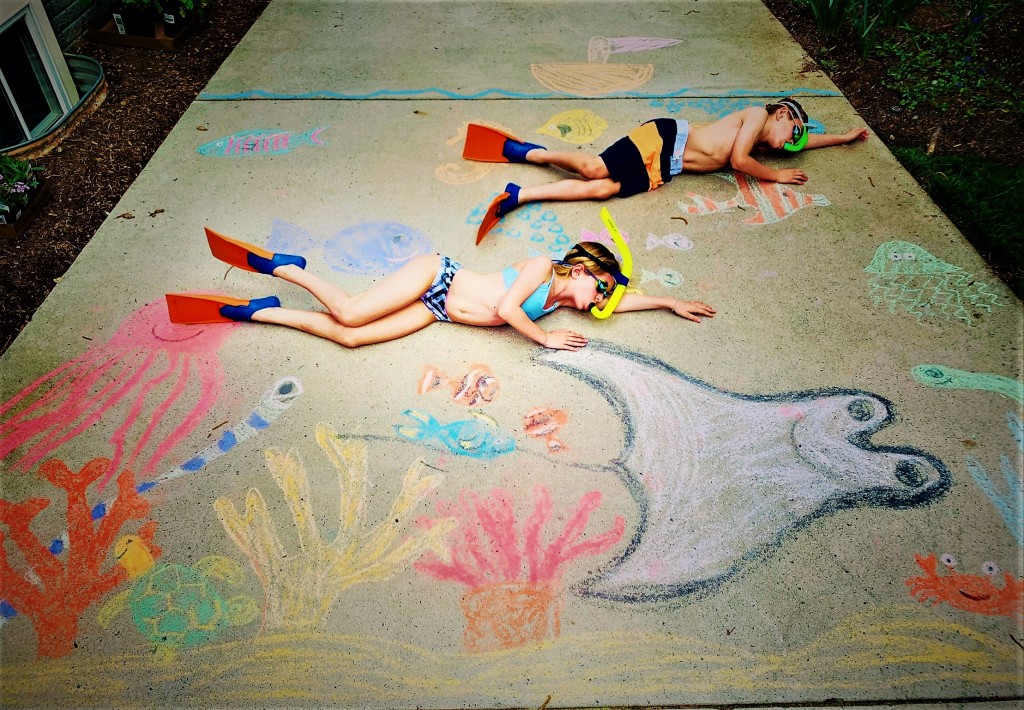