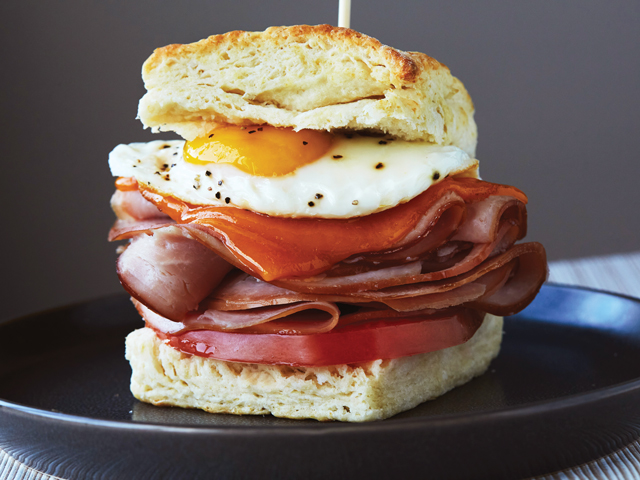 The Brekkie (egg, cheese, tomato, pickled onions and your choice of meat) on a biscuit. Photo by Deb Lindsey

During his second tour of duty in Iraq in 2007, Jon Coombs drove over a roadside IED and spent the next two months hospitalized, his body riddled with shrapnel, his bones bruised and his brain rattled from the explosion. He was awarded a Purple Heart and redeployed to Iraq a third time in 2010. Cooking was a passion he discovered only later in life, after 23 years of military service.

“I like to say that I put down the rifle and picked up a spatula,” says the combat infantry veteran, now executive chef and general manager of Preservation Biscuit Co., a Southern-influenced breakfast and lunch café that’s aiming to open in Falls Church City in late February.

After his last tour in Iraq, Coombs landed at Fort Myer in Arlington, where he trained soldiers for state funerals and memorial observances at Arlington National Cemetery. During that time he enrolled at the Art Institute of Washington (then based in Rosslyn), taking night classes to earn a two-year associate degree in culinary arts.

“I wanted to cook,” says the Detroit native, who developed an affinity for Southern cuisine during his five years at Georgia’s Fort Benning. He retired from the Army in 2013 and spent a few months “cooking for free” at various D.C. restaurants to gain experience. 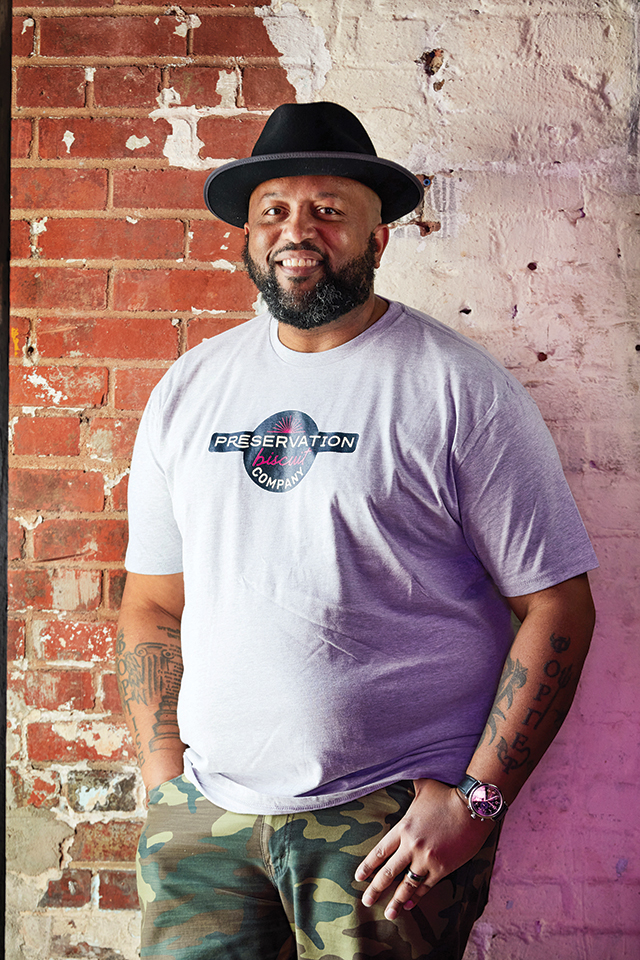 By the time the pandemic arrived, Coombs was executive chef and general manager of Matchbox in Woodbridge. The restaurant closed in March and he was furloughed, as was his co-worker, Tricia Barba, then marketing director for the corporate brand. (In August, Matchbox Food Group filed for bankruptcy. The company has since reorganized under new ownership, but the Woodbridge location remains permanently closed.)

Barba, facing a precarious future, decided to chart her own course, and in August signed a lease on a Falls Church City storefront (102 E. Fairfax St.) previously occupied by a life coaching business. She called Coombs and asked how he felt about biscuits.

He spent the next three months perfecting his recipe—crispy on top, fluffy inside—and building a tight menu concept around the Southern staple. Together he and Barba arrived at a tagline for their new venture: flour butter love. 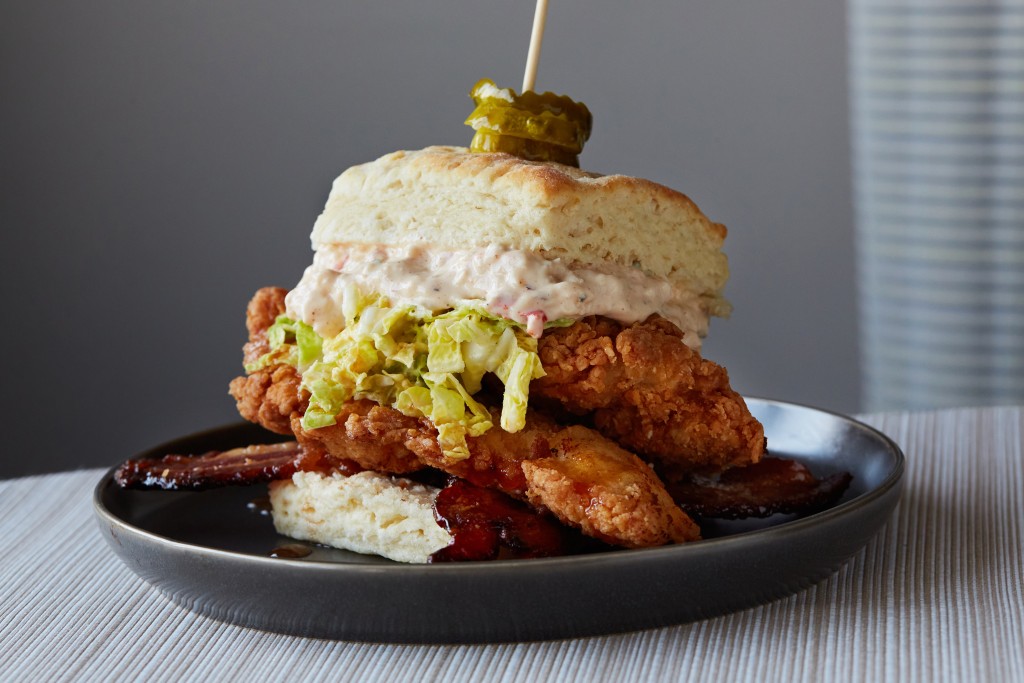 The PBC. Photo by Deb Lindsey

The house special, The PBC, stacks fried chicken, hot honey, candied bacon, cabbage, mustard and smoked-Gouda pimento cheese inside the eatery’s signature carb. “You almost need a knife and fork,” says the chef, 48, a married father of five who lives in Alexandria.

Other sandwiches feature sausage gravy, pulled pork, prime rib, and breakfast-y fillers like eggs, bacon and ham—which is funny in that Coombs personally follows a vegan diet for health reasons. “I have had to cheat just a tad to ensure the flavors are on point,” he confesses, though he does intend to introduce a few vegan dishes as the menu expands. 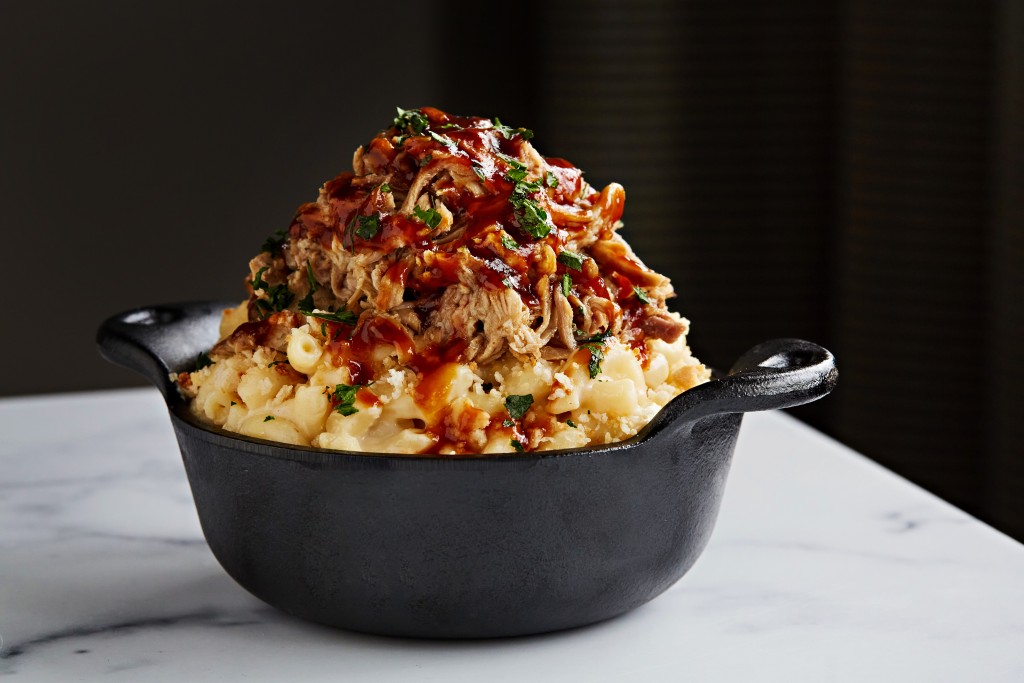 There are sides, including Caesar salad, yam tater tots, mac ’n’ cheese and coleslaw. And sweet concoctions too—shortcake-type desserts that layer biscuits with smothered apples or macerated strawberries and whipped cream. The shop will serve coffee from Swing’s Coffee Roasters in Alexandria.

Purists can also order biscuits straight up with a sampler of house-made jams. The current toppers include strawberry, blueberry and pineapple, but Coombs says he hopes to branch out with other seasonal flavors. 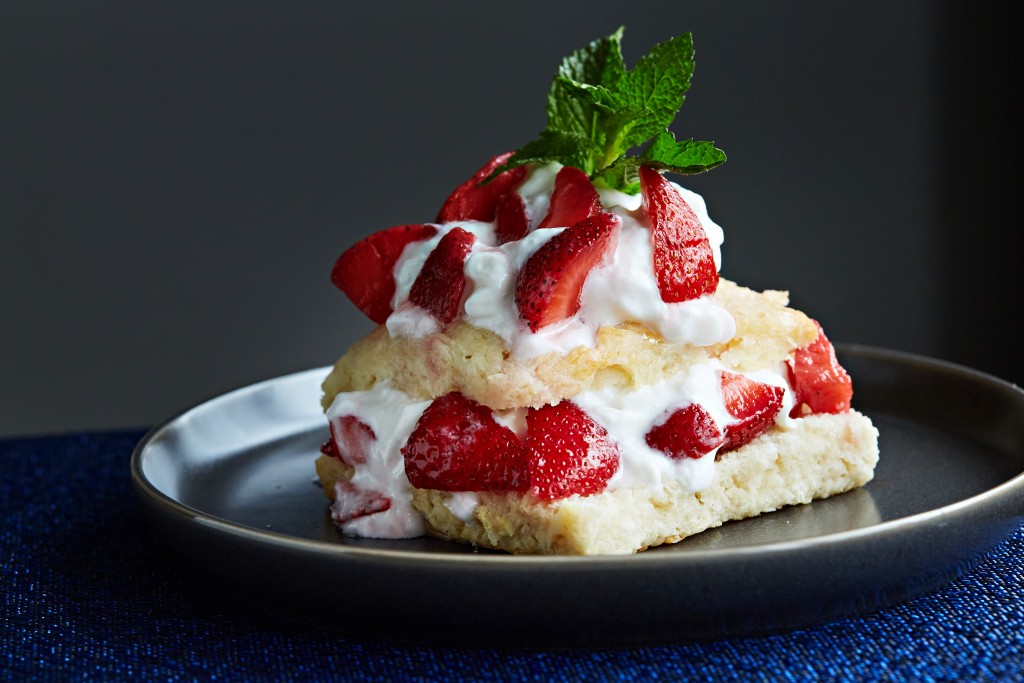 Ingredients-wise, everything is made from scratch, and “we plan to local source as much as possible from the DMV, local farmers markets and direct relationships with outlying farms,” he adds.

Could it be that the pandemic’s economic pain will give rise to a happier homespun venture? Barba is optimistic.

“Falls Church has such a lovely small-town feel,” says the entrepreneur/proprietor, whose café is in the same strip with Bakeshop and Audacious Aleworks. “We are in a great, well-located space and the community has been so welcoming.”

Coombs, meanwhile, is in his element. “Being in the kitchen is consistent with my nature,” he says. “It’s structured. There is order. Except with cooking, no one is shooting at you or trying to blow you up. You are in your own zone.”