Psst: Pass It On 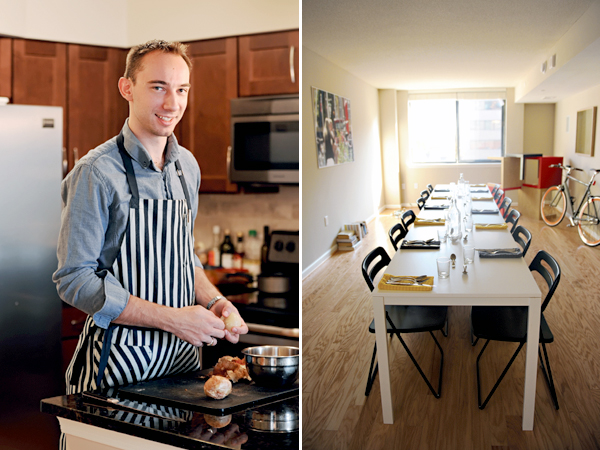 Pssst: Pass It On

Every other weekend, Clarendon resident Tom Madrecki converts the living room of his small, one-bedroom apartment into a one-seating supper club for 12. Someday the enterprising 24-year-old hopes to open a legitimate restaurant. But for now the makeshift operation is his test kitchen.

Inspired by the paladares of Havana, Madrecki’s Chez Le Commis is an underground restaurant that flies, for the most part, below the radar of zoning laws and health regulations by accepting only “donations” for food and drink. (At Commis, that would be $50 per head.) As in New York and London, which have dozens of such alternative dining spots, news of upcoming dinners is spread via word of mouth and social media.

“It’s really no different than when friends get together for taco night and everyone chips in for the beef,” says Madrecki, a Chicago native and University of Virginia graduate who maintains a full-time job as a press manager for an urban planning coalition.

Except that this culinary perfectionist’s six-course dinners (each with three wine pairings) are clearly a cut above Old El Paso. At a private tasting, we enjoyed terrific seared scallops with a saffron-infused squash and a smear of black olive purée, as well as pan-roasted pork loin with maple yogurt and Indian spices.

“It’s my chance to bring something out there and get feedback,” he says.

Madrecki may work outside of the kitchen by day, but he’s no amateur. His culinary training includes volunteer stints in the kitchens of José Andrés’ Zaytinya in downtown D.C., top-rated bistro Le Chateaubriand in Paris, and Noma in Copenhagen (which is currently heralded by the food media as the best and most innovative restaurant in the world).

Most of the adventurous foodies who have patronized Chez Le Commis thus far are in their 20s to 40s, and many come from D.C. To keep the conversation flowing, Madrecki plays “a strange mix of music” that includes everything from ’90s rap to Rat Pack crooners. “It’s all over the place,” he says. “Everyone seems to enjoy it. It’s fun and good.”