The attacks 20 years ago left Arlington and our nation forever changed. 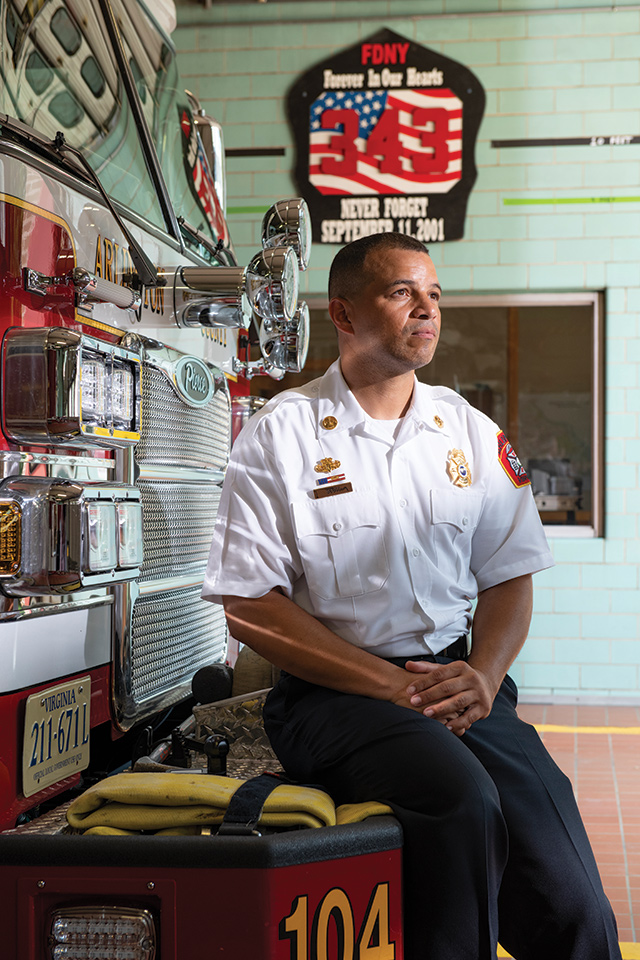 Justin Scott was a rookie firefighter when Arlington County’s Fire Station 8 on Lee Highway (now Langston Boulevard) was called to the Pentagon on the morning of Sept. 11, 2001. A crew from Fire Station 5 in Aurora Highlands had been among the first to arrive (joining a firetruck from Fort Myer that happened to be on-site), followed soon after by a screaming battalion of units from other stations and jurisdictions.

What they encountered was catastrophic, unprecedented and unforgettable. “There was just one piece of the plane I could see,” recalls Scott, who today holds the rank of Captain II with Arlington Fire/EMS. “It was the letter C, from American Airlines.”

Along with countless other responders, Scott spent hours working to suppress the fire raging on the Pentagon’s west side. Al-Qaeda hijackers had flown American Airlines Flight 77 into the building as part of a coordinated terrorist attack that took down the World Trade Center towers in New York and doomed United Flight 93 to crash in western Pennsylvania. Like many of his peers, Scott labored to the point of exhaustion that day and eventually was sent to an Alexandria hospital for observation. As soon as his vitals were stable, he hitched a ride back to the burning Pentagon and got back to work.

By that evening, Arlington’s fire stations were packed with fire, law enforcement and emergency personnel catching sleep where they could and refueling on the copious amounts of food dropped off by local residents. They would need the energy in the difficult days that followed—for containing the blaze, stabilizing the building and recovering victims.

In the aftermath, attention turned to commemorating the fallen and preventing similar attacks. Some of the changes that transformed Arlington were practical, such as the rerouting of Route 110 farther from the Pentagon. Others were emotional and solemn. On Sept. 12, 2002, a special memorial service was held at Arlington National Cemetery for the 184 Pentagon victims, 57 of whom were buried near a five-sided marker in Section 64. The National 9/11 Pentagon Memorial, with its 184 illuminated benches, opened to the public on Sept. 11, 2008.

Over the past 19 years, the annual Arlington Police, Fire, Sheriff and ECC 9/11 Memorial Race has drawn more than 40,000 runners and raised more than $800,000 for 9/11-related charities. Arlington’s Community Emergency Response Team, founded on Sept. 10, 2002, in response to 9/11, employs trained citizens who help first responders during disasters.

“The love and support this county showed during 9/11 was unlike anything I’ve ever seen,” Scott says. “It’s indescribable. There was so much giving. Everyone bonded that day.”

Where They Were: Arlingtonians Reflect on 9/11