They started painting rocks for fun. Now their stoop is a neighborhood attraction. 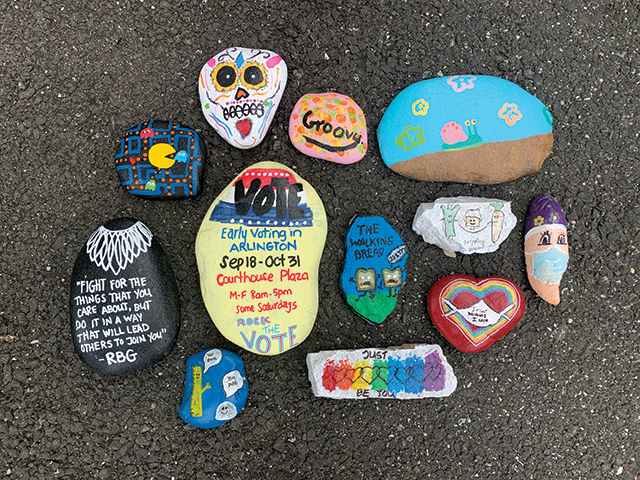 Painted rocks by the Reid family. Photo by Sydney Johnson

Last year, Lara Reid’s family moved to Lima, Peru, for her husband’s job with the State Department. They’d been there six months when they were told to return to the U.S. due to the pandemic.

They temporarily settled into a Lyon Park rental house, where a friend welcomed them back to Arlington with toys, bikes, household items and a large, hand-painted rock that read “Love.”

A few weeks later, Reid and her children, Sophie, 11, and Mateo, 9, began hand-painting their own rocks and leaving them on their front steps for passersby to enjoy. Reid, a former teacher at Saint Charles Early Childhood Education Center in Clarendon, says the project kept them grounded during a time when they were living out of suitcases and constantly adjusting.

The stoop has become a neighborhood landmark, of sorts. Reid says she overhears people commenting on their mini masterpieces. One visitor told her that finding new rocks had become a highlight for her and her toddler. “It’s therapeutic for me to make them, but it’s even more therapeutic to see the reactions when people walk by,” she says. “It warms my heart knowing they make people smile.”