How to Do Consignment

Whether you’re looking to buy couture at a discount or offload a fashion purchase that didn’t work out, these consignment shops have your number.

When Kim France moved to Manhattan in 2000 to take the helm as editor of Lucky magazine, she lived out of a hotel for the first year, bringing only the clothes that would fit into her room’s postage-stamp-size closet.

As it turned out, the editing proved liberating. Wardrobe thus pared down to only her favorite pieces, she always felt fantastic in what she was wearing, never struggling with that what was I thinking? moment as she passed over an impetuously purchased item that still hung, never worn, tags intact.

I have long fantasized about that closet—the one that contains only the things I love to wear, the things that love me right back. As painful as it is to admit that some of my fashion-aspirational purchases will never translate into real life, it’s even more frustrating to constantly pass by them, languishing in wardrobe purgatory.

Happily, I’ve found a way to make peace with my fashion regrets: consignment. My thinking is this: If I can’t pull it off, perhaps someone else can.

Setting out on a mission to edit my own closet, I visited three local shops whose stock-in-trade is previously owned apparel. All three deal in women’s clothing and accessories, including copious racks of denim—standard-bearers such as Hudson, 7 For All Mankind, Citizens of Humanity, Paige and Rock & Republic—but the merchandise in each store also reflects the individual flavors of the neighborhood, as well as the personal style of its owner.

To see firsthand how the consignment process plays out, I hauled an armload of clothing into each store, subjected my items to the owner’s approval, and steeled myself for honest critiques. Where did I get the best bang for my consignment buck—and which shops offer the best merch? I can point you in the right direction, but discovering these things on your own is half the fun. Opened in April 2007, Current is the brainchild of owner Carmen Lopez, a petite knockout whose fashion sensibilities presage contemporary trends. Her store’s style vibe is accordingly young and modern, but Lopez insists on bringing in clothes that are also sophisticated and well constructed. “We look for natural fabrics—silk, leather, cashmere, nothing too vintage or costume-y,” she stresses.

The majority of Current’s consigners come from the surrounding Clarendon and Courthouse neighborhoods—mostly young professionals and party girls who no longer have use for that fabulous dress they’ve been photographed in too many times. In the five-and-a-half years since opening its Clarendon store, Current has expanded to three other locations: Old Town Alexandria, Dupont Circle and, most recently, Bethesda. But having great consigners is just one of the ingredients for success.

“Everyone who works here knows fashion,” Lopez says, giving store manager Amanda DeSanto and her staff a huge amount of credit. “The Clarendon store is really well curated; the merchandise here is top-notch.”

Labels that establish street cred include separates from Theory and Alice + Olivia; dresses by Milly, Shoshanna and Trina Turk; blouses by Diane von Furstenberg and Marc by Marc Jacobs. “J.Crew also sells really well here,” says Lopez, as do items from French Connection and Anthropologie. She also supplements the store’s inventory with brand-new pieces from New York and L.A. fashion houses, such as Collective Concepts, Ark & Co. and Esley, most of which fall well below $100.

In the accessories case, you might spy a Celine clutch or a Tiffany bangle. Handbags line up like soldiers on high shelves throughout the store, but the really good stuff—Gucci hobos, Marc Jacobs satchels—is stationed above the registers. While most of the shoes are from on-trend, contemporary labels, you’ll find the occasional Manolo Blahnik pump or Tory Burch ballet flat.

My contributions included a Nanette Lepore navy blazer that retailed in the $300 range in 2008, priced at Current for $141; a four-year-old silk print Beth Bowley halter dress purchased from a sample sale for $118, resale priced at $87; and a black-and-white-striped cotton J.Crew dress that I bought last spring for $88, now selling at Current for $25.

The rejection pile? Two cotton-jersey dresses that didn’t make the cut, because they looked “too worn” (I had thought so, too, which was why I was looking to ditch them) and a Ralph Lauren gold-lace cocktail dress purchased on sale for about $100 in 2001 that Current cited as not being modern enough.

While Current asks for all clothes to be clean and neatly folded, we did notice a white smudge on the back of the blazer that Lopez was able to remove with her arsenal of dry cleaning tools. I’ll get half the selling price of each item in either store credit or cash at the end of 90 days, but more fun would be to use the money to buy a necklace that caught my eye: a sliver of tiger’s eye suspended from a delicate chain made by local jeweler Shelley White. 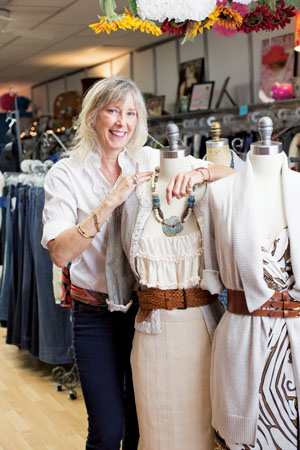 If you’ve driven down Broad Street in Falls Church anytime in the past 20 years, you’ve probably seen New to You. On the day I visit, a bright, breezy sundress by Tracy Reese is stationed at the store’s entrance, and the first thing I spot when I walk inside is a pale pink Hervé Léger bandage dress, tags attached, marked at $976—nearly 40 percent off its original Saks Fifth Avenue price of $1,590; the second is the store’s impeccably put-together owner, Christina Novak, who has established a career out of making resale glamorous.

Much of New to You’s inventory comes from retailers such as Neiman Marcus and Saks, mixed in with funkier labels like Anthropologie and Free People. You’ll find clothes that are in season, divided into age-appropriate racks: separates from St. John and vintage Donna Karan palazzo pants; dresses from Lilly Pulitzer, Milly and Theory.

Novak and her staff—who include Marymount fashion student Kendra McCullough and local jewelry designer Debra Fabian—often play What Not to Wear with their clients. “We won’t let someone walk out unless they look fabulous,” Novak says, noting that a well-dressed client is their best form of advertising. They’ll also keep a wish list and serve as personal shoppers, notifying customers when something they’re looking for comes in.

Before I hand over the things I’ve brought in to consign, I try them on for Novak and her staff to solicit their candid opinions; for the most part, they validate the reasons I’m ready to part with the pieces, although they do talk me into keeping a taffeta party frock. They agree to take a Juicy Couture sundress that was priced last year at $238, resale priced at $36; a two-year-old Plenty by Tracy Reese scarf-print maxi dress bought on sale for $120, reselling for $60; and the Ralph Lauren gold-lace dress that wasn’t modern enough for Current, which they put on their selling floor for $30.

Among the rejects? The same two cotton-jersey dresses that Current handed back to me. I will get 50 percent of the selling price of the items, and I can pick up anything that doesn’t sell within 90 days; otherwise it will be donated to the Springfield-based Ecumenical Community Helping Others (ECHO). 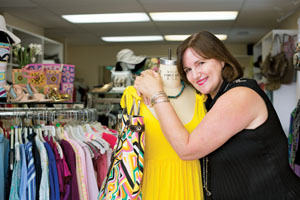 Tucked into a retail/office park just past Balducci’s in McLean is Fashion Exchange, a tiny gem of a consignment store. For the past 17 years, the store’s affable owner Ann Condit has been helping Redskins wives and McLean socialites find new homes for their designer duds, as well as facilitating the resale of wardrobe staples “that you can build a look around.”

In the 800-square-foot space, racks are jammed with current-season basics from Ann Taylor and Banana Republic, but it’s not hard to pick out the more fashion-forward (and ritzy) finds: silk tops from Tory Burch; a Chanel trench; piles of heels from Louboutin, Jimmy Choo, Gucci and Prada.

“We’re best known for our handbags and shoes,” Condit says, as I spot a sophisticated Ferragamo satchel rubbing elbows with a buttery Botkier hobo bedecked in edgy hardware.

Clothes are organized by item, color, then size. A small section is affectionately dubbed “What Porter Would Wear”—a nod to Condit’s fashion-savvy sidekick, Porter O’Neill, who works at the store and gravitates toward skirts from Tracy Reese, tops by Tory Burch, wrap dresses by Diane von Furstenberg and girly separates by Nanette Lepore.

While there are couture pieces to be found, Condit embraces a broad range of items. To wit, she took both cotton-jersey dresses that the other stores didn’t: an Ella Moss sundress originally $177 last year, resale priced at $28; and a t-bags print dress purchased at South Moon Under for $220 in 2009, resale priced for $45. She also accepted a black-and-white-print silk dress from Laundry, purchased at Bloomingdale’s for $200 in 2001, priced in store for $38; and a Banana Republic silk tank, originally in the $90 range, reselling for $27.

Condit did hand back to me a burgundy leather Furla handbag, on the grounds that it was out of season (it was), and a slinky black jersey cocktail dress by ABS because she didn’t think it would suit her clients. As at the other stores, I will get 50 percent of the selling price of the items, which may be further reduced, depending on how long they stay on the floor.

But maybe it’s not the return on investment that makes consignment worthwhile so much as the chance to turn your fashion fumbles into someone else’s score. And vice versa.