Whether you’re looking for a game-day watch party or supersized takeout, there’s no shortage of options. 🏈 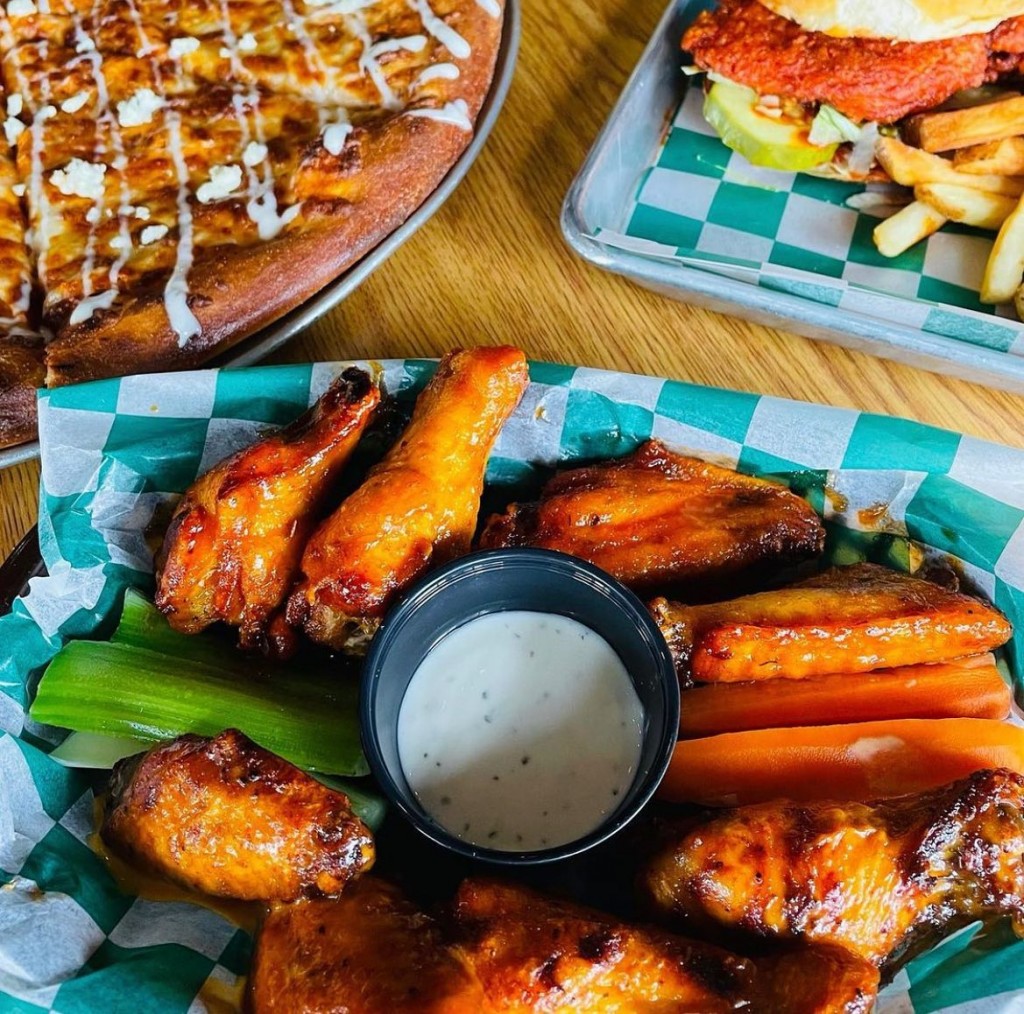 The Los Angeles Rams and the Cincinnati Bengals will go head-to-head in Super Bowl LVI on Sunday, Feb. 13 at 6:30 p.m. ET in Los Angeles’ SoFi Stadium. Even if you don’t have a rooting interest in this game, one thing is for certain: Super Bowls are best watched with plenty of food around. Here are several places in and around Arlington offering game-day specials, whether you will be joining in-person for the watch party, or ordering the takeout spread of your dreams.

Dudley’s is the quintessential sports bar with an abundance of televisions, so no matter where you’re sitting for the watch party, you’ll have a good view of the game. Indulge in the wings, which come in 10 different flavors, or order one of five taco trays for your Super Bowl evening. The bar’s usual Sunday mimosa special will still stand on Super Bowl Sunday, so you can also get a bottle of champagne for $5. If you’re coming with a larger group (eight or more), be sure to make a reservation. Get there early and you might snag one of the 20 theater-style seats—available on a first-come, first-serve basis—for a fully immersive watching experience. Or, bundle up and enjoy the game on the rooftop patio. Watching from the comfort of your own home? Dudley’s also has Super Bowl specials to-go, including 50 wings for $70 or 100 wings for $120. If pizza is more your thing, pick up two large cheese pies for $30. Order by Feb. 9. // 2766 S. Arlington Mill Drive, Arlington (Shirlington)

A local favorite for its ambiance, beer list and traditional German fare, Bronson Bierhall has plenty of long communal tables indoors and outdoors where you can watch the Super Bowl—with a few cocktail specials made just for the big game. For those watching from home, its to-go menu includes “I’m Just Winging It,” which comes with four sausages and buns, a pound of German potato salad and two pounds of wings for $55. Or, go all in with the “Clear Eyes Full Hearts Can’t Lose” package, with sausages and potato salad (plus onions and peppers for an added cost) for 25-30 people for $315. Need beverages? Take home a growler and/or to-go cocktails that serve 10. Pre-order by Feb. 11. // 4100 Fairfax Drive, Arlington (Ballston)

Quinn’s on the Corner

Arrive at Quinn’s by the 6:30 p.m. kickoff and you can enter to win a raffle for a 50-inch television. The pub’s Super Bowl LVI watch party also promises another opportunity at halftime for a swag bag giveaway. To whet your whistle, Quinn’s will be offering deals on stadium cans, RedBull drinks and Jell-O shots. Seating is first-come, first-serve throughout the indoor bar and outdoor seating space (which has views of the TVs indoors); arrive early if you want to score a spot. // 1776 Wilson Blvd., Arlington (Rosslyn) 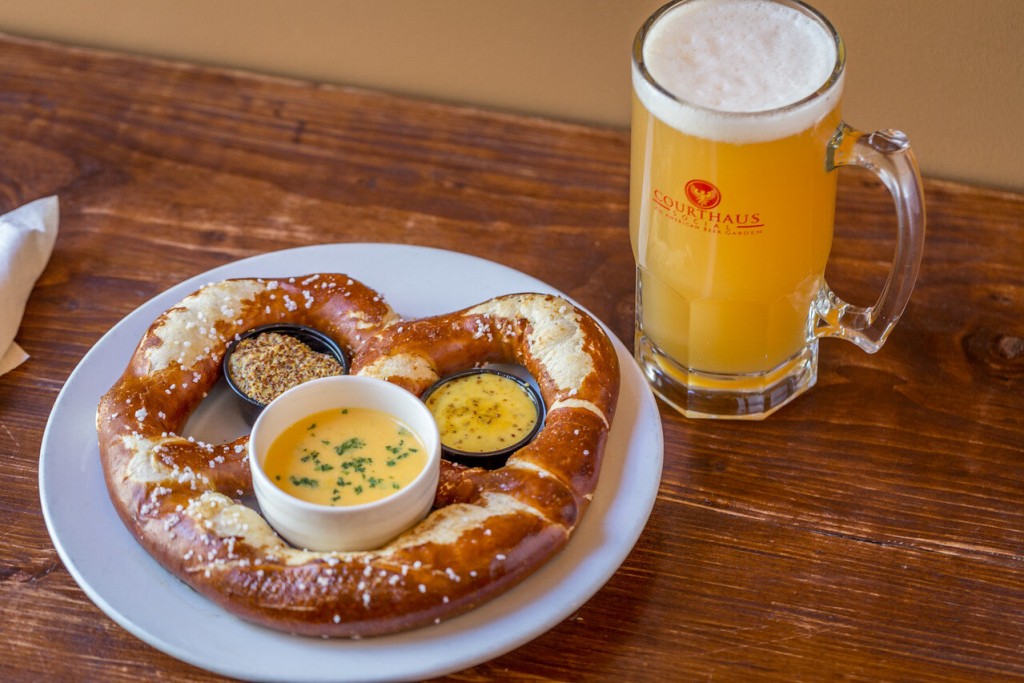 Calling all tater tot (and football) fans: Courthaus Social’s dine-in specials for the big game include bottomless tater tots and fries for $8, along with half-price nachos and cheese bratwursts. Wash down those snacks with steins of draft beer which are $2 off. Along with indoor seating, there’s plenty of bench seating outdoors, but only about half of the seats are within view of the four TVs.  If you’re watching at home, snag a Tailgate Haus Style platter for $65, which includes a Big Haus Pretzel with beer cheese, 16 wings, one order of tater tots or french fries, and two crowlers (canned in-house draft beer) of select beers. // 2300 Clarendon Blvd., Arlington (Courthouse)

With more than 30 televisions and 40 flavors of wings, First Down has all the makings of a great gridiron party. (Last year it sold close to 12,000 wings.) Game-day specials include discounts on stadium cans, hard seltzers, mixed drinks and several appetizers. First Down doesn’t have outdoor seating, but if you’re having your own party, pre-order one of its catering platters for pain-free planning and cleanup. Pre-orders must be in by Feb. 11 at midnight. // 4213 N. Fairfax Drive, Arlington (Ballston) 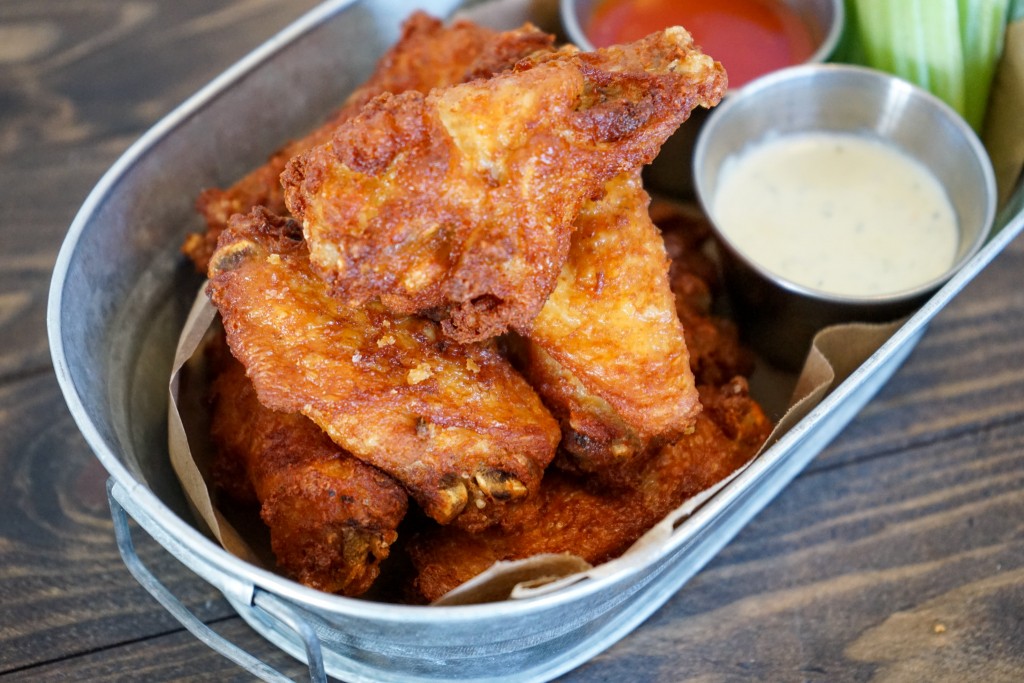 Open Road Grill in Rosslyn is celebrating the game with all things chicken. Think wings, tenders and bites of varying sizes, available with the rubs and sauces of your choosing and draft beer growlers. You can watch the game either inside or outside on the patio—or order a platter for takeout. // 1201 Wilson Blvd., Arlington (Rosslyn)

McNamara’s is an AFC North bar, so if you head to this Crystal City spot to watch the Super Bowl, you will almost certainly be surrounded by Bengals fans. Purchase a $100 wristband got all-you-can-drink wine and beer, plus access to a buffet, valid during game time. Or, indulge in a la carte specials such as $12 sliders or chili nachos; $12 for two chili cheese dogs and buckets of beer. If you’d rather be outdoors, both of McNamara’s patios have TVs. // 567 23rd St. S., Arlington (Crystal City)

Hosting your own Super Bowl gathering at home? Here are some more worthy takeout options:

→ Celebrate the Year of the Tiger at the Eden Center