Sydney Barta is Going for Gold

The Arlington teen will compete in the 2020 Summer Paralympic Games in Tokyo later this month. 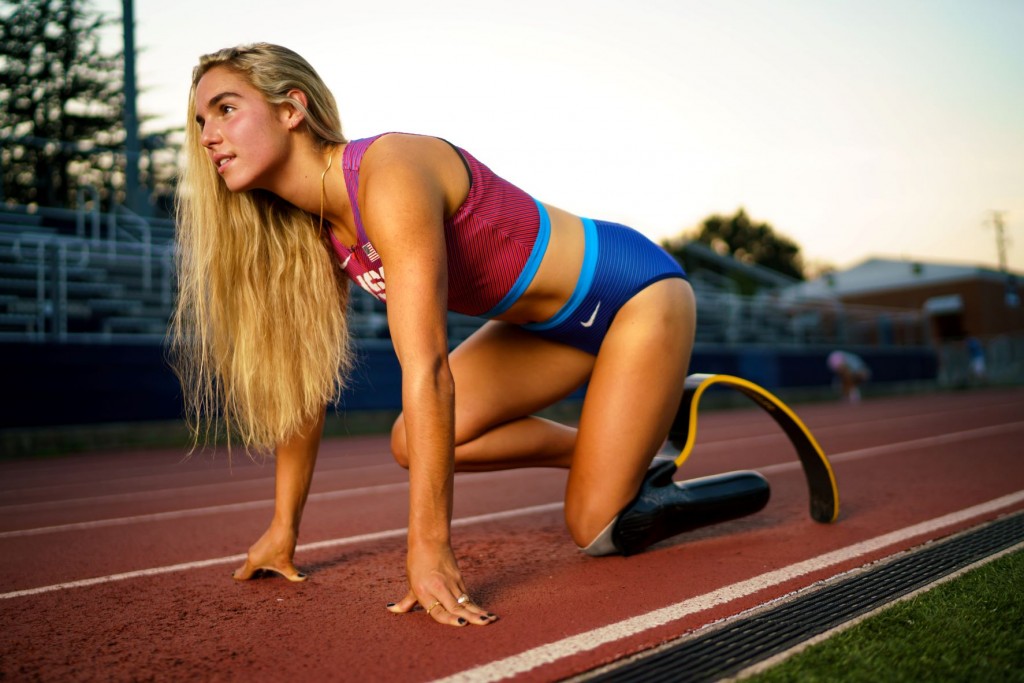 You could say 17-year-old Sydney Barta has it all—top grades at the National Cathedral School in D.C., a supportive family and a spot on the 2020 U.S. Paralympics Track & Field National Team, which will compete in Tokyo beginning Aug. 25.

Barta, who lives in Cherrydale, lost her left foot at age 6 when a piece of scaffolding fell on her during a Marine Corps Marathon fun run. While in the hospital for four months, her foot became infected and needed to be amputated. But she views the loss as a blip on the screen of her athletic life, which includes excelling at volleyball, water polo, basketball, discus, javelin, long jump and running. She was named U.S. Paralympics Track and Field 2019 Female Field High School Athlete of the Year. In Tokyo, she’ll compete in the 100- and 200-meter sprints.

I interviewed Barta the day before she left for Japan. We talked about the Paralympics, her “disability,” and what keeps her moving forward at—we hope—a record-breaking pace.

I am blown away by your accomplishments.

You’re competing in the 100- and 200-meter races in the Paralympics. Why do you love sprinting?

Before I found para-track and adaptive track, I had an explosive sports background, being able to start and stop at high speeds. I played NCS varsity basketball and volleyball. That translates well to sprinting.

Take us to the moment just before you start a race. What’s happening in your mind and body?

There’s a lot of adrenaline going on, especially when I’m behind the blocks getting ready. Once I’m down on the blocks, after they say ‘Set,’ my mind visualizes what I’m going to be doing, like I want to be explosive in the first 30 meters. But when I’m on the blocks just before the gun, I’m totally in the moment. When the gun goes off there’s nothing in my head. It’s mostly muscle memory, trying to push as hard as I can. I want to beat people.

That’s the competitor in you.

It’s innate, the reason I keep doing it. I love competition, and it’s what motivates me. I do better when I have better competitors. That’s why I’m so excited for the Paralympics. I’m competing against the very best from around the world, and I think I’ll rise to the occasion. I think I’ll run a PR, a personal best. That would beat 13.11 seconds in the 100, and 26.93 seconds in the 200.

Have you always been competitive?

It’s something that’s been promoted in our family. It’s unrelenting. My twin brother, Blair, and I share that when it comes to grades, test scores, running, sports. It’s just how we operate as a family. It defines me as an athlete and a person. I always have a drive to be the best.

Do you mind talking about your foot, which you lost at age 6?

I remember the accident, but I don’t remember a lot about what happened after.

What went through your mind when you heard your foot needed to be amputated?

It wasn’t as monumental as it sounds. It was a long time coming. They amputated each of my toes individually. So, when they wanted to cut off the rest of my foot, I thought, That seems like a good idea.  I didn’t have the hope that it was going to get better. I felt ready to lead a normal life again or have the chance.

You were an awfully mature 6-year-old.

I had a really good support system—my mother [Laura] and my grandparents.

Do you see yourself as disabled?

I don’t think of disabled as someone who is unable to do something. I look at it as a description of someone with an impairment. It’s the word that was given us. But I think we’ve reclaimed it.

Tell me about the blade you use to run.

It’s a special Ossur sprinting blade made of carbon fiber with a big curve on the end that provides for energy redistribution. It tries to mimic a calf. It has spikes on the bottom. You wouldn’t want to walk around on it.

What do you want to do as a career?

I want to be an orthopedic surgeon. I have this dream of being a specialist doing amputations. When I was getting my amputation done they wanted to amputate it really high, but my mother intervened. So, I want to be a surgeon specializing in high-quality amputations. It’s important.

I don’t have one. I work hard in school, and I train really hard. I really value my sleep, and I have to eat a very specific diet. A social life isn’t something I miss. In my freshman and sophomore years, I cared more about who you’re dating, what are we wearing. But during the pandemic in my junior year, I was more isolated. It changed me. I feel the best I’ve ever felt. I’m in great shape.  I think it’s going well the way it is. I don’t want to change anything.

As an athlete, what’s next on the horizon?

The Paralympics is the biggest stage, but there’s always more to be done. We have Worlds, the Pan American Games, and more Paralympics. There are also records to break. There’s never enough.