Situated on a tributary of the Chesapeake Bay, this vacation home is a cool drink of water with 180-degree river views. 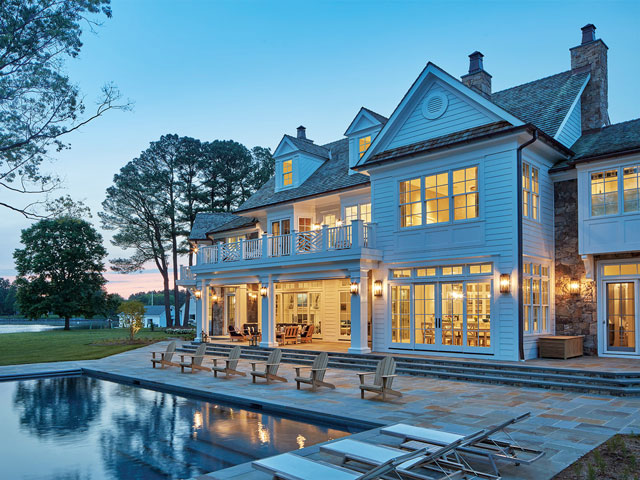 As an architect in Annapolis, Cathy Purple Cherry designs a lot of waterfront homes. But this one was special.

“Very few pieces of property happen to be where the land curves and offers the opportunity for two or three magnificent views—not just a straight-on parallel with the water,” says the principal and founder of Purple Cherry Architects. It was on this particular site, near where Island Creek meanders off the Choptank River and around a point in Oxford, Maryland, that Purple Cherry was asked to design a new vacation retreat for an Arlington family. Their extended brood had outgrown the existing house there. 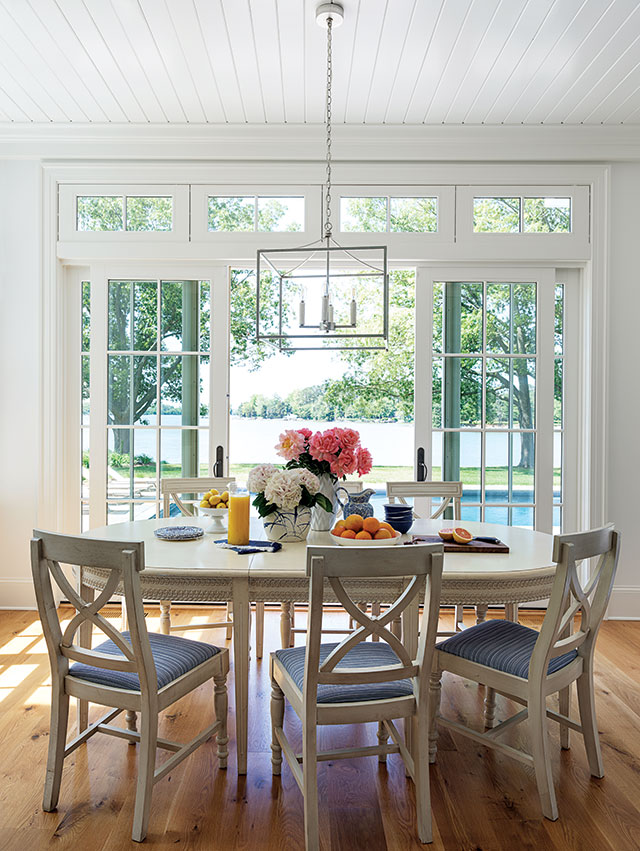 The owners, whose primary home is in Country Club Hills, had initially purchased a 1950s farmhouse that sat on the property in 2004. But with three bedrooms for the couple, their two children, the wife’s parents and her sister’s family, and the husband’s four siblings and their families, “there was a lot of overflow,” says the architect.

The old house was also segmented into rooms that didn’t flow well, so everyone inevitably ended up crowded into the small kitchen.

Purple Cherry worked alongside Bethesda designer Marika Meyer—who had decorated the family’s Arlington home—to create a warm and welcoming getaway where every room has a water view, and the open kitchen-living room can comfortably accommodate large numbers. 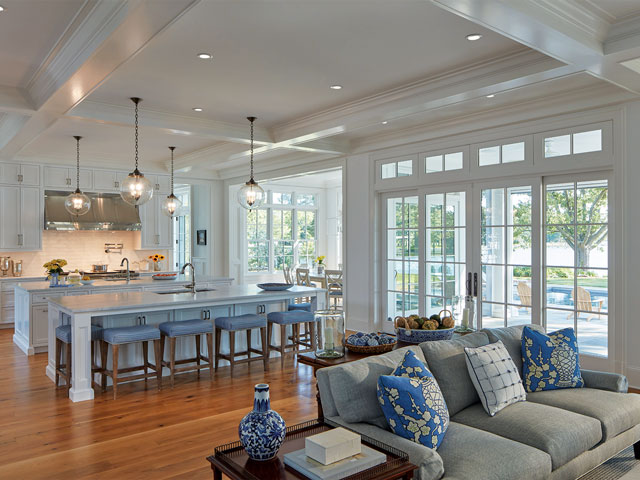 The new kitchen-living room forms the core of the house and opens to the pool patio in back. Counter stools by Woodbridge Furniture. Island pendants by Remains Lighting. Photo by David Burroughs

Virtually every architecture and design decision considered the outdoors and the home’s orientation to the water. Though it spans a generous 8,000-plus square feet, the new house is just one room deep, with a central structure and projecting wings that “hinge” inward in front to mirror the curve of the creek in back. 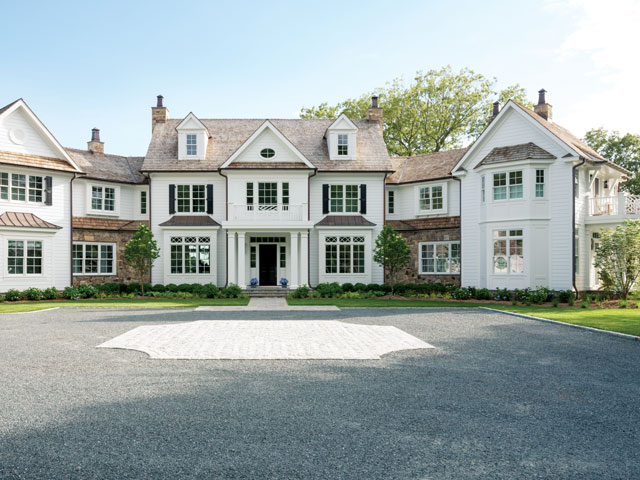 The house is designed to resemble an old manor that’s been added onto over time. Photo by Angie Seckinger

Essentially, Purple Cherry says, “it’s a Georgian country manor home modified to capture the views and the light of the waterfront.”

The owners wanted their place to look like it was old and had been added onto over time, so the architect designed it as a series of connected structures clad in alternating materials such as stone and clapboard siding. 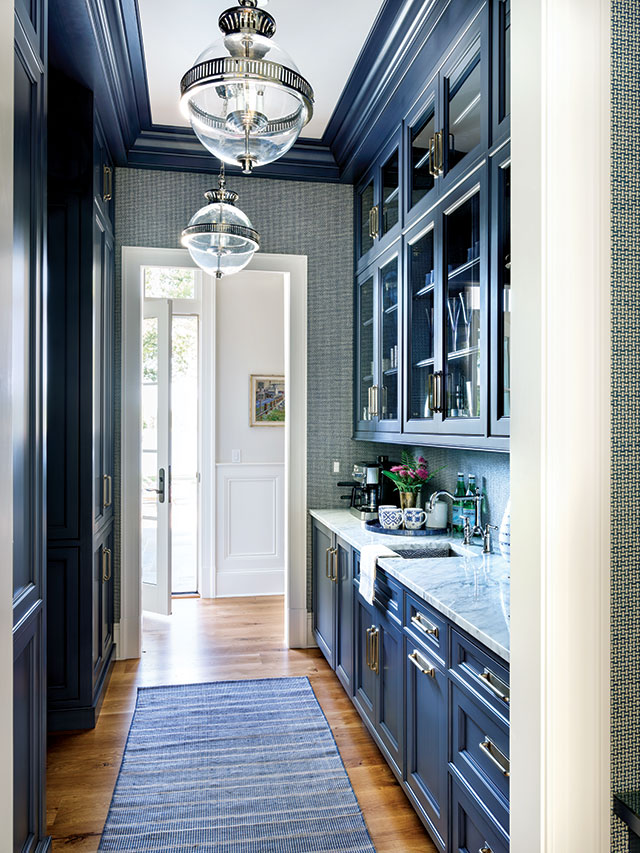 Inside, Meyer went with a palette of maritime blues and soft greens, speaking the same language as the property’s natural surroundings. Her decision to forgo draperies on much of the main level almost needs no explanation. “The house is such a story about the exterior and the property,” she says. “We didn’t need to lean on window treatments in ways that we often do to soften a room.” 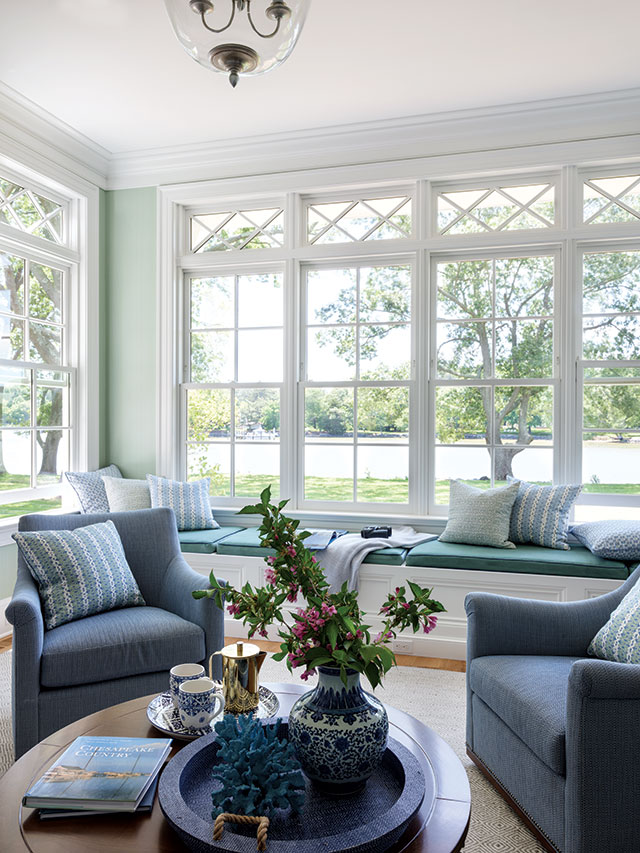 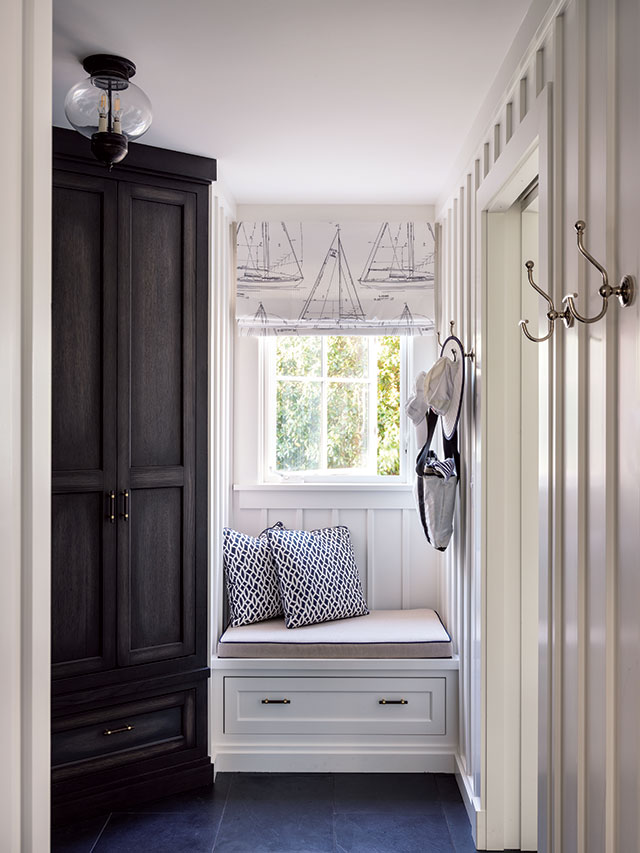 Although the family spends much of their time in the kitchen and living area, the dining room is also a key space, given its position in the floor plan: it’s on axis with the creek as it heads out toward the Choptank. “The dining room won the long view, end of story,” says the architect. In that room, prominent built-ins display the owners’ large collection of blue-and-white porcelain.

“The dining room represents the story of this house. It can be dressed up for the holidays, or dressed down for a Tuesday morning breakfast,” says Meyer, who blended embroidered fabrics with a distressed table and sisal rug to convey a sense of casual elegance. It’s a combination “that really epitomizes the decisions we made throughout the house.” 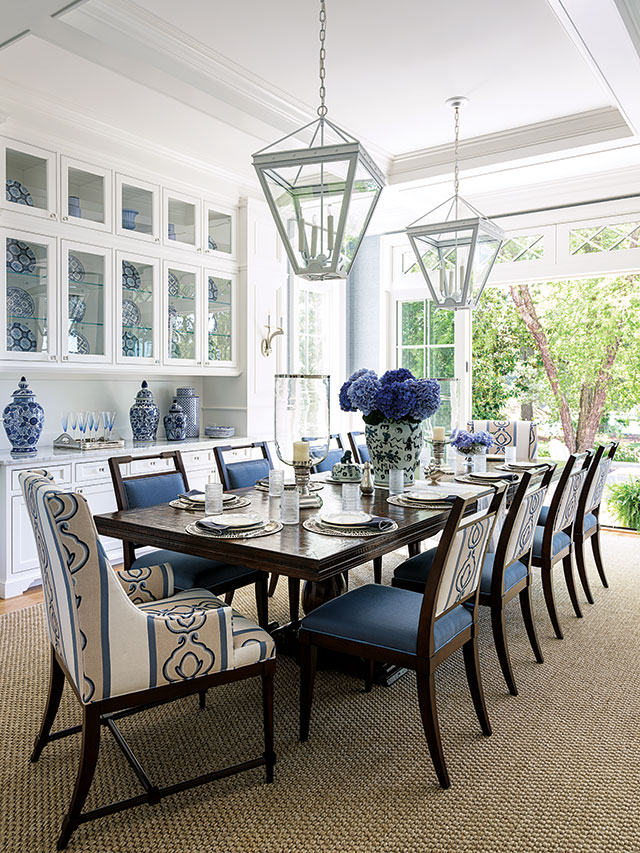 The dining room is designed around the owners’ extensive collection of blue-and-white porcelain. Photo by Angie Seckinger

After the project was completed in early 2019, the family was overjoyed to have a getaway spot where everyone could congregate and feel comfortable. Little did they know how much it would come to their rescue once Covid-19 put life on hold. 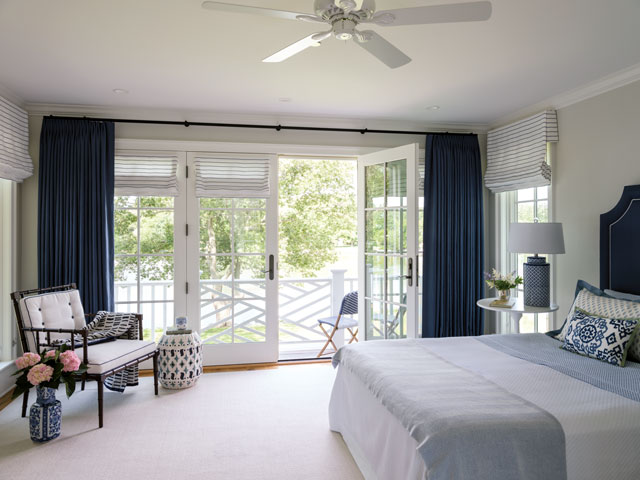 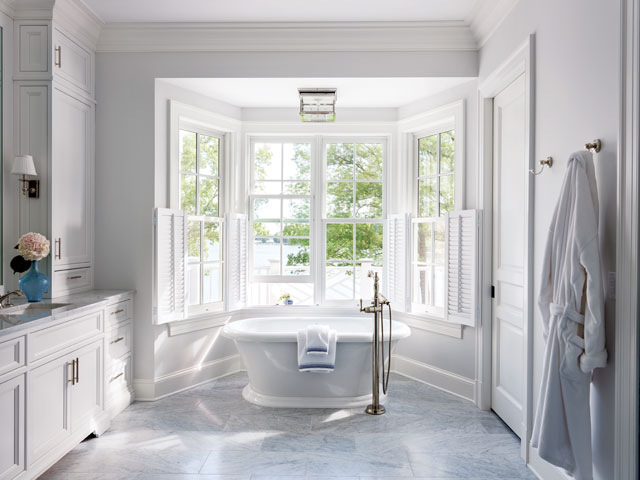 Even the master bath has spectacular views of the water. Photo by Angie Seckinger

The wife’s mother, who lives alone in Annapolis, took up residence in the first-floor suite for the duration of the quarantine. As this story was reported, the couple’s son was continuing his college studies at his great-grandfather’s desk in the upstairs guest room, while the husband had claimed a new work-at-home base in a teak-paneled office off the master suite. 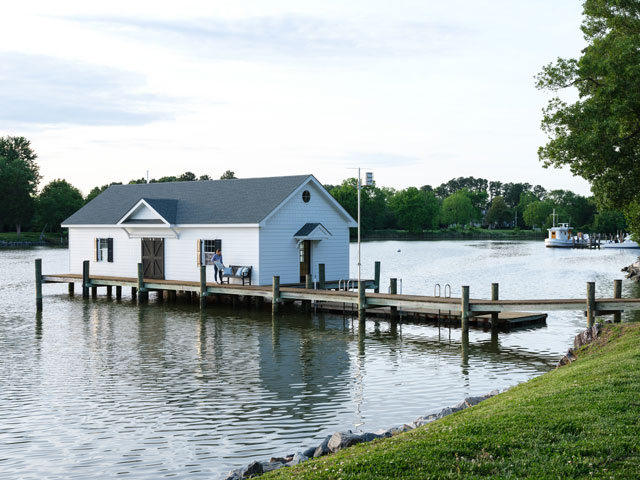 The best friend of the couple’s teenage daughter—separated from her parents who live abroad—moved into the guesthouse on the property.

“It’s working in ways that we didn’t anticipate,” the wife says. “It really is a delightful place to shelter.”

Jennifer Sergent is a design writer based in Arlington. Read her blog, DC by Design.