Tales of a Therapy Dog

Think your life is busy? This Falls Church canine holds down three jobs. 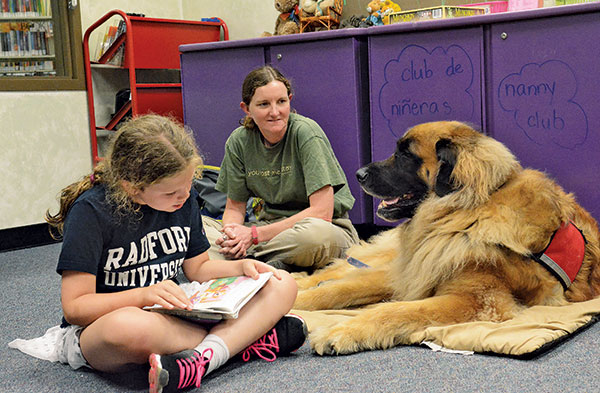 Aslan and his owner, Jennifer O’Keefe, at a Paws to Read session

Chemotherapy leaves cancer patients with little to smile about. But when Aslan plops his cartoonishly large head into the lap of a woman who is hooked up to an IV, she instantly lights from within.

It’s all in a day’s work for the 165-pound canine from Falls Church, who on this particular morning is making his rounds at the John P. Murtha Cancer Center inside Walter Reed National Military Medical Center in Bethesda. A member of the Red Cross Walter Reed Dog Pack, Aslan visits the hospital with his owner, Jennifer O’Keefe, at least once a week.

The amputee clinic is next on their agenda. The brawny 5-year-old announces his presence in each new space while O’Keefe offers the same assurances she’s uttered thousands of times: “He’s very big, but he’s gentle.” Followed by: “You can pet him. That’s what he’s here for.”

Later on, in the pediatrics unit, Aslan rolls onto his back for a belly rub from a young mother whose son is hospitalized. He then poses for a selfie on her smartphone.

A Leonberger—a jumbo-size breed from Germany that’s closely related to the Newfoundland, the Saint Bernard and the Great Pyrenees—Aslan is hard to miss as he lumbers through the hallways.

“People say, ‘it’s a horse, it’s a bear’…but really, he’s a lion,” O’Keefe says. Leonbergers were first bred in the mid-19th century, supposedly to resemble the lion on the crest of the city of Leonberg. Aslan’s name references the great lion in C.S. Lewis’s The Chronicles of Narnia.

O’Keefe, an emergency veterinarian at VCA SouthPaws in Merrifield, is careful to explain that Aslan is a therapy dog, not to be confused with a service dog. Service dogs are trained to perform specific tasks for people with disabilities, such as helping a blind person navigate their surroundings or sensing an oncoming seizure before it occurs. The Americans With Disabilities Act (ADA) allows handlers to bring service dogs almost everywhere, including on the Metro and in restaurants. 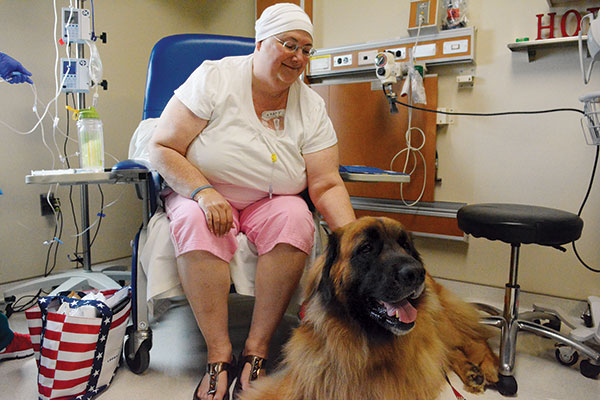 With a cancer patient at Walter Reed

As a therapy dog, Aslan is allowed only in places where he’s been invited. “They’re considered working dogs,” O’Keefe clarifies, “but they have no rights afforded to them by law. His job is to get petted and make you smile.”

Still, Aslan is no slouch. In addition to frequenting Walter Reed, he also works on behalf of People. Animals. Love. (PAL), a Washington, D.C.-based organization that facilitates human-animal bonding in schools, nursing homes, hospitals and libraries.

During a visit to Arlington’s Columbia Pike library branch for a “Paws to Read” session, he dons a small red vest (to signal he’s working), does a quick meet-and-greet with two other pups and then bounds into the building. Soon, several elementary school children enter the room, toting a few books to read to the dogs. (Studies have found that kids who are too timid to read aloud to parents or teachers may be more inclined to do so with a furry audience of one.)

Aslan falls short of being an attentive listener—he snoozes through the 15-minute story time, waking up intermittently with a dramatic sigh—but the kids don’t seem to mind.

At times, Aslan’s volunteer work has taken him farther afield. He’s also a canine ambassador with HOPE Animal-Assisted Crisis Response, a nonprofit that provides comfort and support to disaster victims. This summer, he and O’Keefe were called to West Virginia for five days after floods destroyed entire communities there, leaving residents devastated.

“I’m still shocked by everything we saw. It’s amazing what water can do,” says O’Keefe, who, with Aslan, made stops at various distribution sites and disaster recovery centers in towns like White Sulphur Springs. A few weeks later, they were comforting flood victims and emergency responders in historic Ellicott City, Maryland.

Sometimes the HOPE calls are closer to home. In 2015, the two were summoned to Washington’s Navy Yard after false reports of a gunman left personnel feeling unsettled. “Because so many people had been there during the initial shooting [in 2013, when Aaron Alexis killed 12 people], it brought back a lot of emotions,” O’Keefe recalls.

O’Keefe says she had no intention of raising Aslan to become a therapy dog when she first brought him home, as a 7-week-old puppy, to her house in Falls Church’s Broyhill Park neighborhood. But she quickly realized his laid-back temperament was a gift.

“We went through PAL and got him tested and certified,” she says, “and the rest is history.”

The gentle giant did much of his training at the Armed Forces Retirement Home in D.C., where O’Keefe noticed his profound impact on patients in the memory care unit who otherwise rarely communicated verbally. “They had conversations with the dogs,” she says. “My heart melted.”

Will Aslan’s little brother, Diggory—whom O’Keefe is also training—follow in the elder dog’s footsteps? Likely yes. Diggory is already doing therapy work through PAL, paying visits to nursing homes, as well as to local middle schools and high schools during stressful exam times. But the junior Leonberger is not yet ready for young children.

“He has a different personality than Aslan—he’s much more exuberant,” O’Keefe says. For now. He’ll probably mellow with age.