I saw it as a slam dunk. My dad saw things differently. 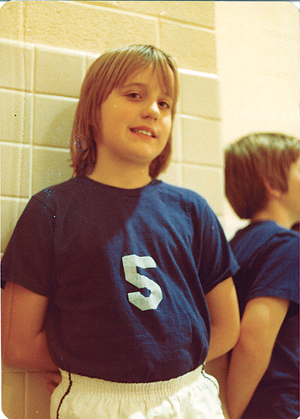 Growing up in the ’70s and ’80s in Northern Virginia, basketball was everything. My idols played in the NBA. I slept, ate and played hoops all year long. In the spring, summer and fall, I walked and biked to meet friends at local playgrounds and spent endless hours in pickup games, refining my skills on cracked asphalt courts with chain-link nets.

When winter arrived, the game became more official as we moved indoors and played in organized leagues. I always looked forward to that time of year because my dad coached my teams and consulted with me on strategies like picking the starting lineup and defensive assignments. (With the exception of one year, he was my travel team coach from third grade until I graduated from high school.) Before the start of each season, he and the other coaches would meet at someone’s house and hold a draft. I remember sitting at home near the front door on those nights, anxiously waiting for my dad to return with the roster.

Our elementary school leagues were dominated by a handful of overgrown kids who muscled and bullied their way to stratospheric point and rebound totals. But by the time I entered seventh grade in 1980, there was more parity; some kids were starting to develop real talent, and a player could no longer rule the court by size alone.

A week or so into preseason practices that year, a friend stopped me in the hallway of Walt Whitman Middle School. He told me that his cousin, Willie, had just moved into town and wanted to play basketball. Under league rules, a late registrant would be automatically placed on the team that would have had the next pick in the draft. And as destiny would have it, we had the next draft pick. So Willie was assigned to our team.

I vividly recall the first night Willie showed up for practice. He truly was a man among boys. His height alone—close to 6 feet tall—made him a rare commodity, but his game also matched his physique. He was not simply a lumbering enforcer, capable of taking up space and intimidating smaller players. He had agility and finesse that none of us could match. In fact, his dominance was so overwhelming that my father—who was 6 foot 2 and about 210 pounds—had no choice but to join the scrimmage as a player to give Willie a physical challenge (and probably to protect the rest of us).

The seminal play that night involved somebody missing an outside shot and the ensuing battle between my father and Willie for the rebound. The mere fact that my adult father had to “battle” a middle-school kid for a rebound seems ludicrous, in hindsight. There was a lot of contact and, when the play was over, Willie had the ball. In the process, he had knocked my dad’s glasses off his face and across the dusty gym floor. It got quiet as Willie handed the glasses back to my dad with an apology and a sheepish grin. But the rest of us were  pumped. We knew what Willie would mean for our team: a championship.

That night, unbeknownst to me, my father called the league president, expressing his concerns that Willie was too big, too strong and too dominant to play in our league. The next day, to my great despair, I learned that Willie had been assigned to another team in a league for older kids. My visions of bringing home the trophy instantly vanished.

That disappointment turned to anger when I learned that Willie’s transfer was a direct result of my father’s intervention. In my eyes, that unilateral decision was an act of betrayal that cost our team the championship. We hadn’t broken any rules to get Willie; it was fate. And I knew for a fact that none of the other coaches would have voluntarily jettisoned such a valuable player. I didn’t dare tell my teammates why Willie had moved up to another league.

As I sat in my room, seething, I couldn’t comprehend why my own father and coach would turn his back on his son, his team and a guaranteed championship. After all, winning a middle-school-league basketball title is the type of monumental experience that you carry with you for life—a memory that you share, years later, with children and then grandchildren perched on your knee. With a single telephone call, he had dashed all those hopes and ripped an entire chapter out of the book of my life.

Nearly 35 years later, my playing days are over (I stopped playing competitively after high school), but I’m still in the gym on a regular basis, coaching my 8- and 10-year-old daughters’ basketball teams in the Arlington County house league. My idols no longer play in the NBA. To me, the game is about getting exercise, learning how to be part of a team and mastering the ever-elusive art of winning and losing gracefully. It’s also a great way to spend time with my kids.

Sitting on the bench as a coach, I often think back to my time as a young player. I see myself as a shadow on the court, with my father as the helm. I don’t remember how my seventh-grade team fared that season. I never played with Willie again, although I heard that he eventually gave up basketball for football and ended up playing defensive line in college.

While my recollections of those seasons fade like so many other trivial memories, the story of Willie has stuck with me. In fact, it has become even more vivid in its message and poignancy now that I am a coach and father.

I experienced that series of events through the eyes of a 12-year-old, and it turns out that I was probably right in one respect: none of the other coaches would have made that phone call. But I now know that while I slept that night, my father was, in fact, writing a chapter in the book of my life. He was creating an irreplaceable memory and lesson that I cherish and will pass on to my children and grandchildren.

Jim Davis is an intellectual property attorney in Washington, D.C. He lives in Milburn Terrace with his wife, Kim, and three children, Maggie, Kate and James III.