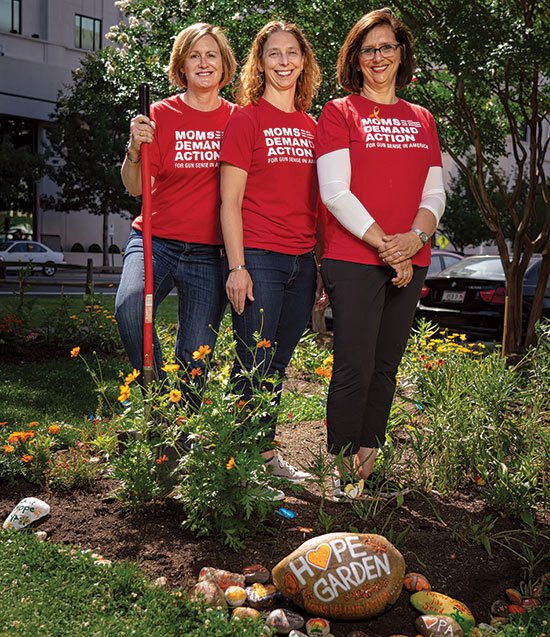 Ask MDA members what prompted them to get involved and you’re apt to hear a litany of tragedies. Virginia Tech. Newtown. Parkland. Las Vegas.

Sometimes it’s personal. Fine felt the brush of gun violence in 2006 when one of her softball teammates, a “nice architect” from Arlington named Damon Ward, was killed outside Ben’s Chili Bowl in the District. Ward was in the wrong place at the wrong time. He was hit by a stray bullet when a nearby argument over a parking space turned violent.

Six years later, Fine had a 3-year-old at home and had just given birth to twins when news broke of the massacre at Sandy Hook Elementary School. By the time a gunman opened fire at Umpqua Community College in Oregon in 2015, she had had enough. She saw gun safety as a critical issue with obvious solutions.

“It happens so much and so often, just the cumulative effect of all of it energized me, pushed me into getting involved,” says the Lyon Park resident. “Nobody has time for this. Nobody in Arlington has time for anything. But we are making time.”

Half of the mass shootings in American history have occurred in the past 10 years, according to a 2018 report by the U.S. Department of Justice Office for Victims of Crime.

In 2018, eight mass shootings (shootings that resulted in four or more deaths) claimed the lives of 71 people and left another 51 injured, according to analysis by The Washington Post. As of August 5, another five mass shootings in 2019 resulted in 56 fatalities and 63 injuries.

Northern Virginia is not immune to gun violence. Since 2014, Arlington County Police have investigated 15 homicides, two of which were determined to be officer-involved justified shootings. Of the other 13, six involved firearms, including a fatal altercation on July 1 inside the Pentagon City mall parking garage. Fairfax County saw 32 homicides involving firearms over the same time period.

Celia Slater’s two children are grown now, but she remembers being afraid for them. “I didn’t want them growing up in a world where they were worried about gun violence in schools, the workplace, places of worship, the bus…,” says the Ashton Heights mom, 61.

When Slater joined MDA four years ago, the Arlington chapter had a dozen active members. Today, as the communications contact for the group, she maintains a mailing list of about 800. She estimates some 250 are actively engaged in advocacy and education efforts.