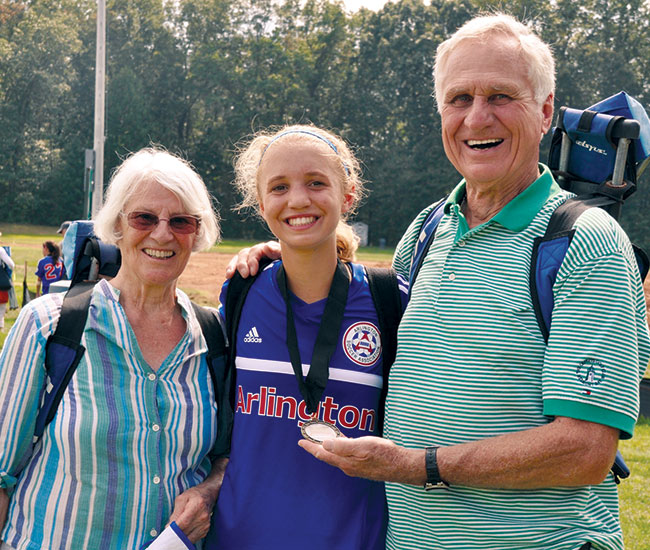 Susie Paul-de Leede’s family still bears scars from the murder of her father-in-law, a retired economist for the World Bank. Shortly after midnight in March of 2016, a killer stood on the deck of Johan de Leede’s Lorton home and shot more than 15 rounds from a semi-automatic through a back window, killing the 83-year-old, and then slipped away into the night. The victim’s wife of 55 years and three other visiting family members from the Netherlands were also home at the time, roused from sleep by the crack of gunfire.

Three years later the case remains unsolved. He was the “guiding compass” of the family, says Paul-de Leede, who lives with her immediate family in Arlington’s Waverly Hills neighborhood. She remembers how he showed up unfailingly at his granddaughters’ soccer games and took them out for ice cream afterward to talk strategy.

Her older daughter, now 18, hasn’t set foot on a soccer field since. Her younger daughter, 17, lives with the worry of not knowing why their family was targeted. Both girls honored their grandfather by organizing a Students Demand Action chapter at H-B Woodlawn Secondary Program.

“Every day people are being killed in their own homes and communities. It’s outrageous,” says Paul-de Leede, a marketing professional for a global nonprofit. (She is also a former Arlington Magazine staff member.) She joined MDA, in part, as a way of working through the grief. “I don’t want anyone else to go through the pain our family has had to go through,” she says. “This is my way to honor my father-in-law, to give me purpose.”

In Arlington, MDA’s community outreach focuses on educating the public about safe storage and handling of firearms, and also about how to recognize individuals who are at risk of self-harm.

Two-thirds of gun deaths are suicides. The death rate for suicide attempts with firearms is nearly 83 percent, making guns more lethal than any other method, according to the Harvard School of Public Health.

“Our kids have no impulse control,” says MDA chapter leader Fine. “That’s not their fault. It’s where they are developmentally, so we have to keep our guns locked up so they aren’t in danger. If your kids know where the Christmas presents are, they also know where the firearms are.”

As a mother of young kids, Fine says she initiates the uncomfortable conversations. Before playdates or visits to family members, she asks whether firearms in the house are locked up tight and stored apart from ammunition.

She’s crusading for other parents to do the same. Arlington is full of military and law enforcement families and plenty of others who have guns. People who don’t own guns too often assume no one does, and vice versa, she says.

Fellow MDA member Linden, whose kids are also elementary school age, tells the parents of any children visiting her home for playdates that she has dogs, nuts and—oh yes—a gun (in a safe that can only be unlocked with a fingerprint).

“My ideal universe is where it’s as natural as asking about food allergies,” Linden says. “There are no judgments, [as in], ‘Are you one of them?’ ” In turn, she asks about guns before sending her kids to other homes. “It is awkward, even as a gun owner. It feels intrusive, but then I think, Wait, this is my kid’s life. How can we expect our kids to make good decisions about firearms if adults aren’t talking?”

“She tells the parents of any children visiting for playdates that she has dogs, nuts and–oh yes–a gun (in a safe that can only be unlocked with a fingerprint).”