The Father of HDTV

Dick Wiley didn't invent the technology. But it never would have seen the light of day without him. 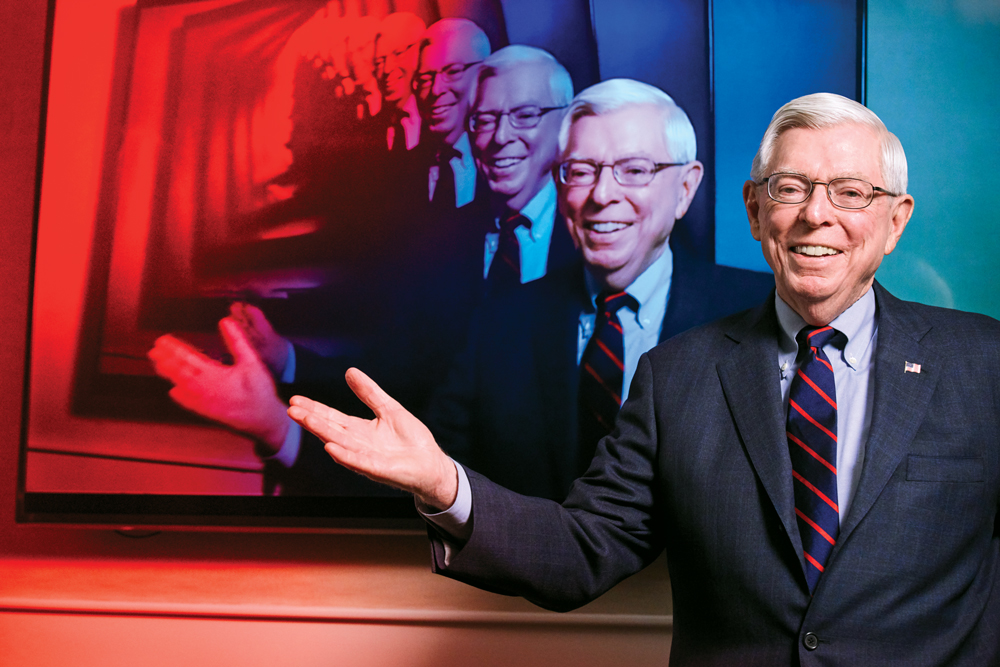 Turn on your TV right now and you’ll probably take for granted the crisp resolution that makes it seem like you’re standing next to Bryce Harper as he swings for the upper deck, or ducking as a bald Danai Gurira (playing the character Okoye) decapitates the villains threatening T’Challa in Black Panther.

HDTV—high-definition television—has been widely available for only a little more than a decade, but in that time it has raised our expectations of how pictures should appear not only on TV screens, but on smartphones and tablets, too. The man largely responsible for that is an elegantly dressed corporate attorney with a smooth (but not unctuous) voice, a courtly manner and shelves of trophies for the role he played in ushering in a revolution.

Richard “Dick” Wiley, chairman of the Federal Communications Commission during the Ford administration, had left government service and founded a powerful D.C. telecommunications law firm (now Wiley Rein) when he was asked in 1987 to head up an FCC advisory committee studying “advanced television service.” The United States’ analog transmission standard had been established in 1941 and colorized in the early 1950s, and all TV sets had to comply with that standard. But by the 1980s, Japan and Western Europe were working on a new standard that would make higher-definition pictures and sound possible.

Echoing the alarm set off by the Soviet Union’s launch of the Sputnik satellite in 1957, FCC officials and Congress were concerned that the U.S. would be left behind in the development of this next-generation technology.

Wiley, raised in the Midwest by non-college-educated parents, wasn’t an engineer, but he had another critical skill set: He was adept at running bureaucratic hurdles and soothing egos with a mix of levity and sternness. During his years running that FCC committee, he arrived at work before 8 a.m. and kept a plaque on his desk that read: “The Workaholic’s Motto: Thank God It’s Monday” (he still has it). The two-year stint he signed up for soon became a second, unpaid job that ate up nine years of his life. At several points, the process almost collapsed, according to the book Defining Vision: The Battle for the Future of Television, by Joel Brinkley.

“We had to make sure we didn’t ruin television,” Wiley says. “There were so many obstacles, you wouldn’t believe it.”

First up: how to deal with multiple HDTV proposals from companies vying for approval of their technology. Whichever firm won out would enjoy millions in patent royalties, and some legendary companies, such as Zenith, were counting on their proposals to save them from extinction. The technical and political details were also daunting: Should the FCC approve a digital system? If so, how could 2 million pixels be compressed to fit into a single, 6-megahertz television channel? Would it be possible to broker unified buy-in from cable providers and network broadcasters, who were often at odds?

Some 1,000 volunteers—engineers, policy experts and others—worked on the project, often slogging through mind-numbing meetings. “Every once in a while, we’d sit around his conference room and he’d make popcorn,” recalls Mark Richer, who was in charge of systems evaluation and testing the proposals. “Dick would often tell jokes, and his funniest jokes were about lawyers. Since most of the people in the room were engineers or scientists, that went over pretty well.”

In 1988, Wiley decided to launch an international competition, and the committee chose seven prototype systems to be built and tested at a lab in Alexandria. The contestants squabbled over the rules and sniped at one another for alleged cheating as Wiley fielded screaming calls over technical disputes. “It was trying,” he says in retrospect, “but I wanted to make it right.”

Finally, at the suggestion of General Instrument chairman and CEO Donald Rumsfeld—the former and future defense secretary—Wiley floated a radical idea: What if the competitors worked together to create one digital standard? Thus, at a meeting at the Grand Hotel on M Street NW, a “grand alliance” was born, comprising such giants as Zenith, AT&T, Philips, RCA and General Instrument, among others.

“[Wiley] is a master of negotiation and compromise and has extraordinarily good political skills,” Richer says. “He was able to sit down with the CEOs of those companies and convince them that was the right way to go.”

There were more hurdles to come. At one point, the partnership almost dissolved because of a dispute over the audio-system parameters, and at the last minute the computer industry huffed that its views hadn’t been considered—which drew the ire of HDTV’s congressional allies. Later on, Brink-ley’s book recounts, indifference on the part of President Bill Clinton’s new FCC chairman, Reed Hundt, threatened to kill the project. One of Vice President Al Gore’s staff members grumped that Wiley, a Republican, was part of a GOP cabal.

“You know, it could all come crashing down after we make our recommendation,” Wiley remarked at one point.