The Man Who Fell to Earth

Arlington has its own piece of Orville and Wilbur Wright’s legacy.

Kitty Hawk, N.C., is famous as the site of the world’s first powered airplane flight, but Arlington has its own piece of Orville and Wilbur Wright’s legacy. The county played a key role in the development of military aviation—during which it became home to the world’s first military air fatality. The crash happened at Fort Myer, not quite five years after the Wright brothers’ historic first flight. 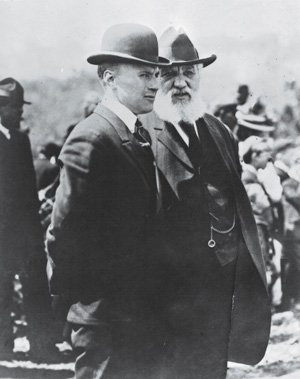 The Wrights had a contract with the U.S. Army Signal Corps for a “Heavier-Than-Air Flying Machine” that could carry two people, sitting upright, at a speed of 40 miles per hour—a new design for the brothers, whose original, lighter Flyer carried only one person in a prone position.

The new craft was delivered to the Army on Aug. 20, 1908. With Wilbur in Europe fulfilling a similar contract for the French, Orville was to spend September at Fort Myer demonstrating the new machine to the satisfaction of the Army. Once assembled, the Flyer was housed in a specially built wooden shed on Fort Myer’s parade ground (known today as Summerall Field). Between Sept. 3 and Sept. 12, Orville made a series of increasingly longer flights, culminating in a record-breaking 74-minute jaunt.

The Wright brothers’ latest Flyer seemed to be a success—that is, until Thursday, Sept. 17, when Orville took off from the parade ground a few minutes after 5 p.m. With him was a passenger, 26-year-old 1st Lt. Thomas E. Selfridge, himself an aviator who had been assigned to the U.S. Army Signal Corps Aeronautical Division. Selfridge also served as secretary of the Aerial Experiment Association, a group led by Alexander Graham Bell, who was on hand at Fort Myer to view the test flights. 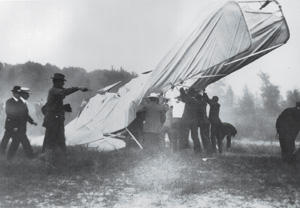 Orville and Selfridge made three circuits of the parade ground at an altitude of about 150 feet; but as they started a fourth circuit, one of the Flyer’s two eight-and-a-half-foot propellers split and came loose, collapsing the plane’s rudder. Out of control, the craft crashed back to Earth. Orville suffered a fractured leg and two broken ribs, but Selfridge was unconscious with a fractured skull. He died during surgery that night.

The Wrights eventually solved the problem of the split propeller and, in 1909, returned to the base with a new Flyer that they tested successfully and turned over to the Army, forever changing the way wars would be fought.

Selfridge, meanwhile, was not forgotten. He’s buried in Arlington National Cemetery, near Selfridge Gate, which is part of the fence line that separates the cemetery from Fort Myer. In 1970, a plaque was dedicated in his honor at Summerall Field—“as a memorial,” it reads, “to Lieutenant Selfridge and to all who have sacrificed their lives in the development of human flight.”