Think book groups are only for wine-drinking women? Think again. 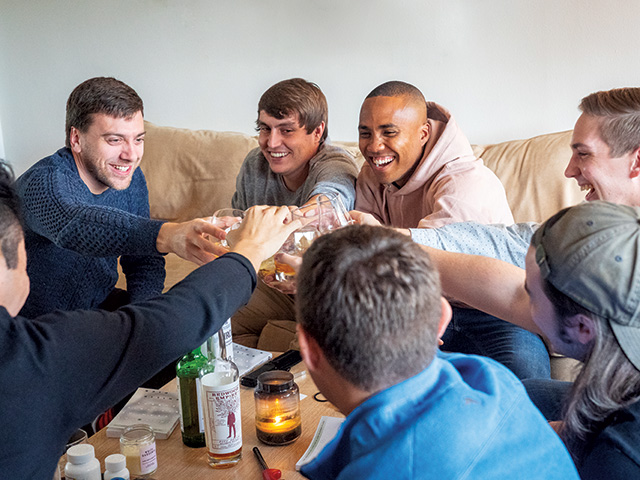 Fingers of whiskey are poured all around, some on the rocks, as seven buddies in their late 20s and early 30s gather in Joel Theroux’s D.C. apartment. But they aren’t there to party. They’re having a literary discussion.

“What did you guys think about the characters’ obsession with keeping live pets?” asks Matt Perez, a civil engineer who lives in Arlington.

“I thought that was really cool and really weird,” says Tinny Song, a lawyer. “The most scarce things are the most valuable.”

Welcome to the Whiskey Book Club, a diverse group of 10 men, mostly Virginia Tech grads, who get together nearly monthly to talk about the written word. In November, the discussion centered on Do Androids Dream of Electric Sheep? by Philip K. Dick, which inspired the classic dystopian film Blade Runner. At one point the conversation turned to how a certain scene blurred the line between human and android existence and the challenges of depicting a virtual reality experience in a novel.

The club’s founders, Dillon Gresham (a software engineer) and Eddie Judge (an accountant), are brothers-in-law. Both were book club veterans when they started this one about two years ago. They invited friends, who invited others, and the club took off. By tradition, the host chooses the book and offers a bottle of liquor to share. These days they generally meet on Saturday afternoons to accommodate Song, who moved to New York City about a year ago and now commutes for the group (and his fiancée).

Initially, some people showed up only to drink whiskey, but soon realized there was more to the agenda. “Once everyone saw that we were having an actual discussion and willing to listen to everyone’s take on literature, they were excited,” says Gresham, who lives in the Mosaic District. “People started generating questions, marking places in books that interested them, pulling up online analyses of books.”

Since then, the club has tackled classic and contemporary tomes ranging from The Fall by Albert Camus to Between the World and Me by Ta-Nehisi Coates.

The latter, a powerful book about being a black man in the U.S., prompted their longest and most impactful discussion to date. “As far as race in America goes, it’s obviously an uncomfortable topic for most people,” says Brad Fleming, an environmental advocate who lives in Arlington, “and something people avoid talking about because they don’t want to say the wrong thing or offend somebody. We had a safe space to have a real conversation.”