Before the Pentagon was built, gamblers went there to bet on horses and hot rods. 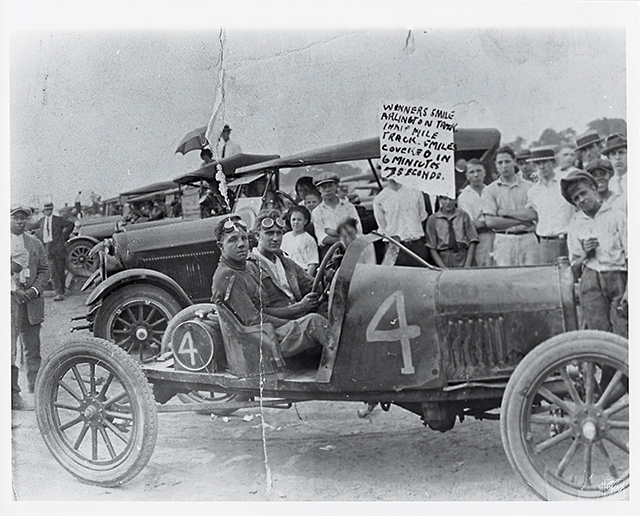 Winners in “Old Number 4” at the Arlington racetrack, circa the early 1920s. Photo courtesy of Center for Local History, Arlington Public Library

Today it’s home to the Pentagon, but around the turn of the 20th century, the riverfront area just north of National Landing was a seedy district known as Jackson City. A haven for drinkers, gamblers and daredevils, its attractions included, among other things, a half-mile-long racetrack near the foot of the 14th Street Bridge used for horse racing, and later, drag racing. Some even referred to it as a “Miniature Monte Carlo.”

In the 1890s, as Virginia lawmakers attempted to control a tide of gambling that had overtaken the commonwealth, corrupt legislators slipped in a loophole by creating an exemption for driving clubs and farming organizations. With that provision, the Jones family of Arlington was able to secure a charter from the Grange Camp Association of Virginia to invest in the Jackson City racetrack, alternately referred to as “Alexander Island.” Soon, spectators were happily crossing the river from Washington, D.C., where horse betting was illegal.

Around the same time, a Gentlemen’s Driving Club (chartered in 1888) gave rise to Alexandria’s St. Asaph Racetrack, an operation backed by high-profile investors—among them Virginia Senator George Mushback, who had helped pass the pro-gambling loophole.

Located in Del Ray, St. Asaph was known to draw thousands of dollars on race days, raking in an estimated $150,000 (the equivalent of roughly $3.8 million today) per year. The lucrative operation was bolstered by a poolroom where gamblers could bet on horse races in other jurisdictions via the establishment’s telegraph wires.

By 1895, the competing tracks in Arlington and Alexandria had reached an agreement to hold races on alternate days so as not to cannibalize business.

Two years later, horse racing was outlawed in Virginia, although the telegraph setup at St. Asaph allowed it to continue facilitating betting on out-of-state races.

The scale of its operation eventually made St. Asaph a target of commonwealth’s attorney Crandal Mackey, who after being elected on a crime-fighting platform in 1903 had launched a crackdown on illegal bars, bordellos and casinos in Rosslyn and Jackson City.

In 1904 (after Mushback’s death), Mackey staged a dramatic raid on St. Asaph, backed by a posse with sledgehammers and axes who destroyed slot machines and other equipment. The poolroom quickly resumed business as usual, but Mackey eventually obtained 19 warrants against its owners, igniting an extended courtroom battle with some of the region’s richest and most prominent figures. Mackey prevailed in 1905 when the St. Asaph operation shut down for good.

It’s unclear why the Jackson City racetrack eluded Mackey’s “shotgun justice,” but it managed to disassociate itself from the reputation of its Alexandria counterpart, and in the early 1900s, introduced spectators to the thrills of car racing. According to one photo from the 1920s, the fastest hot rods of the time could reach speeds close to 50 mph.

The Jackson City racetrack eventually came under the Pentagon’s jurisdiction and is now the site of the Connector Parking Lot.

This story was adapted from “Arlington’s Own Fast and Furious,” a blog post from the Center for Local History at the Arlington Public Library.

The Greatest Gang of Criminals: Arlington During Prohibition

Mile Markers: A Timeline of Pivotal Points in Local History