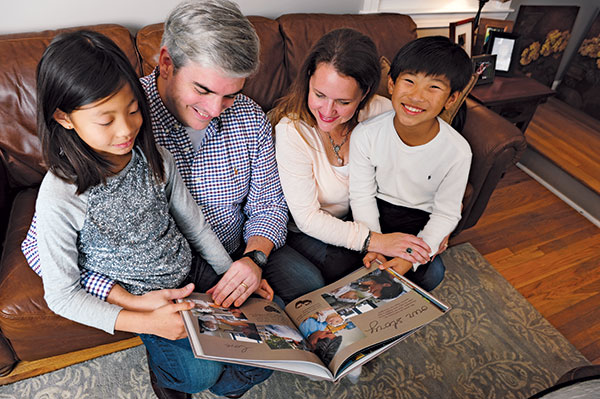 The day Lauren and Matt McLaughlin received word that they had been cleared to travel to South Korea to adopt their son, Joseph, they hung that country’s flag from the porch of their Arlington Forest home.

It signaled to neighbors that a baby was on the way—not from the hospital, but from the airport. “Like when a new pope is chosen,” and the telltale white smoke puffs from the chimney atop the Sistine Chapel, Matt jokes.

Today, they are a family of four: Lauren, 41, a Fairfax County native; Matt, 45, originally from New Jersey; 7-year-old Caroline from Busan, South Korea; and 10-year-old Joseph, from Seoul.

Poring over the photo book that Lauren painstakingly assembled to capture every detail of that first trip in March 2007, Joseph points to an image of his baby self in Lauren’s arms. “That was the first bottle Mama fed me,” he says.

Of course Caroline, who arrived in 2009, has a book of her own. The spiky-haired baby on its cover is now a precocious hostess. “Would you like more rice?” she asks during my visit to their home. (I’ve been invited to partake in a family meal of bibimbap, a Korean dish of rice topped with vegetables, meat and gochujang, a savory red-pepper paste.) 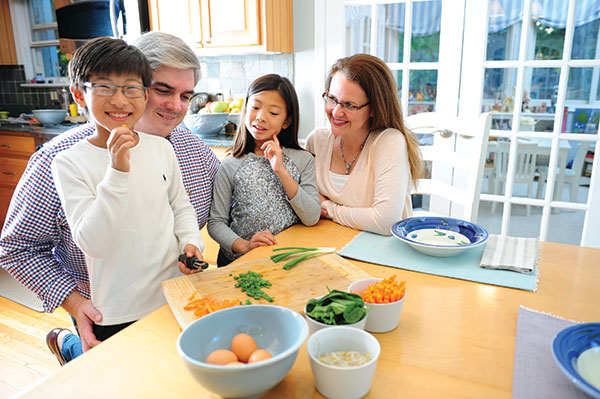 Prepping the ingredients for Korean bibimbap. Photos By Michael Ventura

What a difference a decade makes. Matt and Lauren, both attorneys, still recall sitting in a coffee shop in 2005, debating the pros and cons of adopting a child domestically versus one from another country. The options were dizzying and there were no clear answers. “I could meet you back here in 10 years and you’d still be mulling it over,” said the lawyer they’d retained to guide them in the adoption process.

That’s when it dawned on them that they didn’t want to wait 10 years. “I knew I wanted to be a father,” Matt says. “I didn’t care how it happened.”

They decided to pursue an international adoption (which, at the time,  Lauren says, presented a more definitive timetable than domestic adoption). But that didn’t make the next steps any clearer. They literally faced a world of potential directions. So as the year drew to a close, the couple made a pact: “We decided that on Christmas morning we would separately write on a piece of paper the name of the country we thought was right for us, and then exchange papers, hoping we both wrote the same country,” Lauren says.

In retrospect, it wasn’t just a happy coincidence. “The Korean adoption process was well established with a long history and good reputation,” Lauren explains. (Since 1953 Americans have adopted more than 113,000 children from South Korea.) “We liked in particular that South Korea had a foster care system, [meaning] our child would have a loving foster mother to bond with during the wait.”

Working with the Bethesda, Maryland-based Barker Adoption Foundation (which has an office in Falls Church), the McLaughlins completed an application and began gathering their tax returns, employment history, background checks, letters of reference and medical records into a package called a “dossier.” 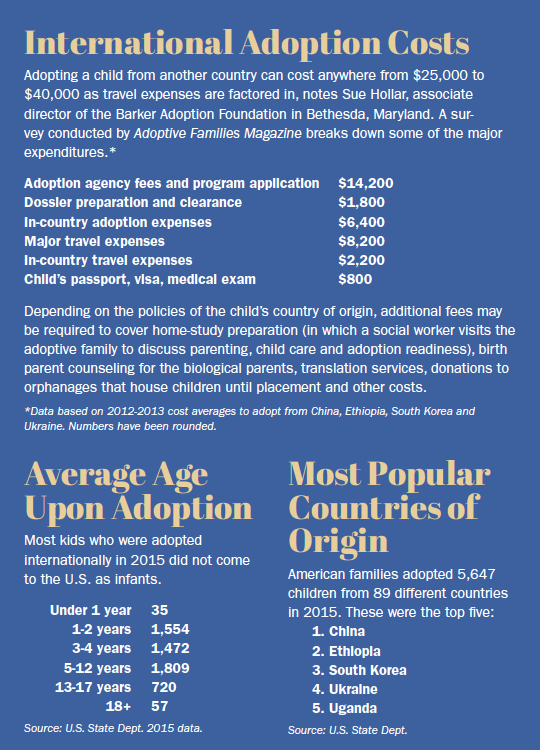 Next, they completed a “home study”—a standard procedure during which a social worker visits the would-be parents at home, verifies that they have a stable residence and talks with them about the adoption process, parenting strategies and other pertinent information. The home study and dossier were then submitted to a South Korean government-licensed adoption agency, which moved through its own process to approve the couple and match them with a baby who was living in foster care and awaiting a permanent family.

In the interim, Lauren and Matt kept busy and embraced the usual nesting rituals: painting the nursery, learning how to wear the baby carrier, taking infant CPR classes.

“We always had a small army supporting us,” Lauren says, recalling the baby showers their friends threw for them and the subsequent stacks of onesies, plush toys and gear waiting to be broken in.

Fifteen months later, the McLaughlins carried Joseph off a plane at Dulles, where friends and family waited to greet the newly minted family of three.
“We knew we were totally taking a flier,” Lauren says of the uncertainty and exhilaration that swirled around their life-changing decision.

The initiation into parenthood is a life-altering time for anyone, but there are additional factors that come into play when an adopted child is of a different race or heritage than the parents, says Ellen Singer, a therapist with the Burtonsville, Maryland-based Center for Adoption Support and Education (CASE), which also has offices in Annandale. In those circumstances, she says, it’s important for parents to demonstrate a genuine interest in learning more about their child’s cultural background and country of origin. And it helps to have additional role models in place whose ethnicity matches that of the child.

“How is a child supposed to feel good about their racial heritage…if no one in their lives is of that heritage?” Singer poses. “It is crucial to their identity, to their positive racial socialization.”

Arlington residents Karen and Michael Souryal still remember the required diversity workshop they attended before they got the green light in 2006 to adopt their second child, Isaac, who is of Salvadoran descent. They worked with Adoptions Together, an agency with offices in Herndon; Baltimore; Calverton, Maryland; and Washington, D.C. During one exercise, would-be parents were prompted to think carefully about the ramifications of adopting a child of another race.
“I remember [the group leader] gave each of us a clear plastic cup and bowls of colored beads,” says Karen, who is white. (Michael is Egyptian-American.)

Participants were then prompted to think about the people in their lives—from boss, to sibling, to hairdresser, to best friend, to neighbor—and to place in the cup a bead representing each one: a black bead for a black dentist, a white bead for a white cousin, a brown bead for a Latino co-worker. “Then they asked us to drop in a bead for our [future] child,” she says.
As they inspected their full cup, the Souryals concluded that they “had plenty of people in our lives” who would serve as racial mirrors and role models for their adopted son.

Still, Karen says, it was a worthwhile exercise for the couple, who run a peer-to-peer adoption support group in Arlington, and are now parents to three kids—one biological and two adopted: “Can you see the world through your child’s eyes? Do they see themselves reflected in that world? Does it feel like a comfortable place to them?”

A transracially adopted child’s views on race, identity and adoption will also evolve over time, notes Sue Hollar, associate director at the Barker Adoption Foundation. As such, the family’s relationship with the adoption agency doesn’t necessarily end once the child has made the transition to his or her permanent home. Barker offers myriad resources for adopted persons at all stages of their lives—from homeland tours for teens to group counseling for adopted adults.
Working with the agency “is in many respects a lifelong relationship,” Hollar says. “Part of what we value here…is the trust [our clients] place in us. That is paramount.”

About 135,000 children are adopted every year in the U.S., according to the Department of Health and Human Services, but today, fewer than one in 25 of those adoptions is orchestrated across borders. Whereas the State Department issued nearly 23,000 immigrant visas to children adopted by U.S. citizens in 2004, that number fell to about 5,650 by 2015.International adoptions in the U.S. have steeply declined as programs in some “sending countries” have been suspended or shut down. Guatemala canceled its program in 2008 amid mounting evidence of corruption and child trafficking. Russia, once a popular choice (Americans adopted a historic high of nearly 5,700 Russian-born children in 2004), has since implemented a ban on U.S. adoptions, reducing the number to zero in 2015 and 2016.

China is now a leading destination for Americans seeking to adopt, even as intercountry adoptions from that nation have declined 70 percent in the past decade as China has tightened its restrictions on foreign adoptions and pushed for more domestic placements. For its part, the South Korean government has also increased incentives for Koreans to adopt domestically.

Douglas Park residents Henry Dunbar and Deborah Hill, now empty nesters, were part of that earlier wave. They were deliberate in their efforts to build a diverse and inclusive family when they adopted three kids from three different countries—Nam, now 26, from Vietnam; Rachel, 23, from Sri Lanka; and Lydia, 18, from India.

Dunbar (who is white) describes Arlington as “a fantastic community in which to raise a transracially blended family.” Even so, he says reactions to their clan over the years have been mixed. Sometimes a benign confusion falls across another person’s face when he introduces his kids who don’t look like him. Other times, the response has been overtly hostile. He still recalls one particularly uncomfortable meal in a nearly empty Chinese restaurant during a family trip to Toronto.“The waitress seemed to be somewhat annoyed, and we couldn’t figure out why,” says Dunbar, 53, a program director for BikeArlington, WalkArlington and Capital Bikeshare. “The service was extremely slow, and we could see there was an animated discussion among the staff going on in the back. We all just sort of looked at each other and realized, ‘She is mad about us as a family.’ ” Eventually another waitress appeared to settle the bill. “We still talk about it to this day.” 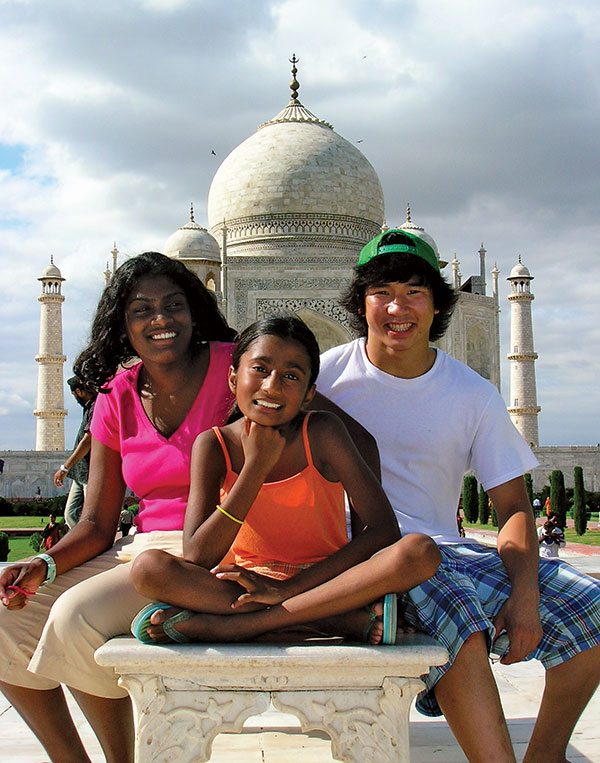 Rachel, Lydia and Nam Dunbar during a 2007 family trip to their respective birth countries. Family photos

In the summer of 2007, the family took a trip overseas to visit each child’s birth country. Dunbar says the experience of being a racial minority, however briefly, gave him a greater empathy for what children of color so often endure in the U.S.

Including his own kids. “There have been times when everyone around me is white but me, and it’s very uncomfortable,” says his daughter Lydia, now a freshman at Syracuse University. “But when we visited India as a family, my parents experienced what it was like to be in the minority.”

The trip was, in many ways, profound. (In Vietnam, Nam visited the village where he was born, and was reunited with peers from the orphanage he had lived in before he was adopted at age 5.) But it also brought moments of levity. “It would be funny to be homesick when you’re actually home,” a 16-year-old Nam wrote in a July 2007 blog post. “But USA is my home too. Whatever. And oh, I had some coconut juice from a coconut [a popular drink in Vietnam] and it was disgusting!”

Arguably, there is a duality present in every child who has been adopted: the life that might have been, and the life that is. For parents and children united through international adoption, says Singer, it’s important to acknowledge both. 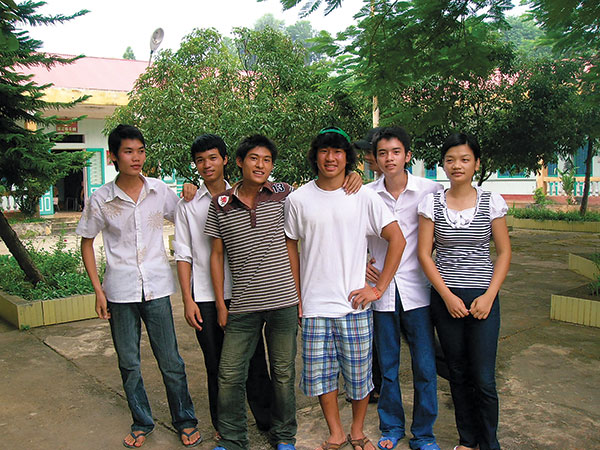 Nam, reunited with peers from his orphanage in Vietnam. Family photos

Taking this advice to heart, the McLaughlins have embraced their children’s culture of origin. In addition to cooking Korean food at home, they recently celebrated Chuseok (a three-day Korean harvest festival) at an event staged by ASIA Families, a Leesburg-based organization that supports adopted persons from Korea.

They also participated in International Night at their kids’ school, Arlington Traditional School, where the family displayed traditional Korean attire (hanbok) and encouraged classmates and their parents to try out a Korean drum and a taste of Korean dumplings.

It was a moment of pride, Lauren says, but not without irony, given what her kids did next. “My children, unfortunately, ran to the Italy table for pizza,” she says with a smile. As American kids so often do.

Amy Rogers Nazarov and her husband, Ari, adopted their son from South Korea in 2008.