The beauty of this modern, streamlined renovation is not just in what was added, but also what was taken away. 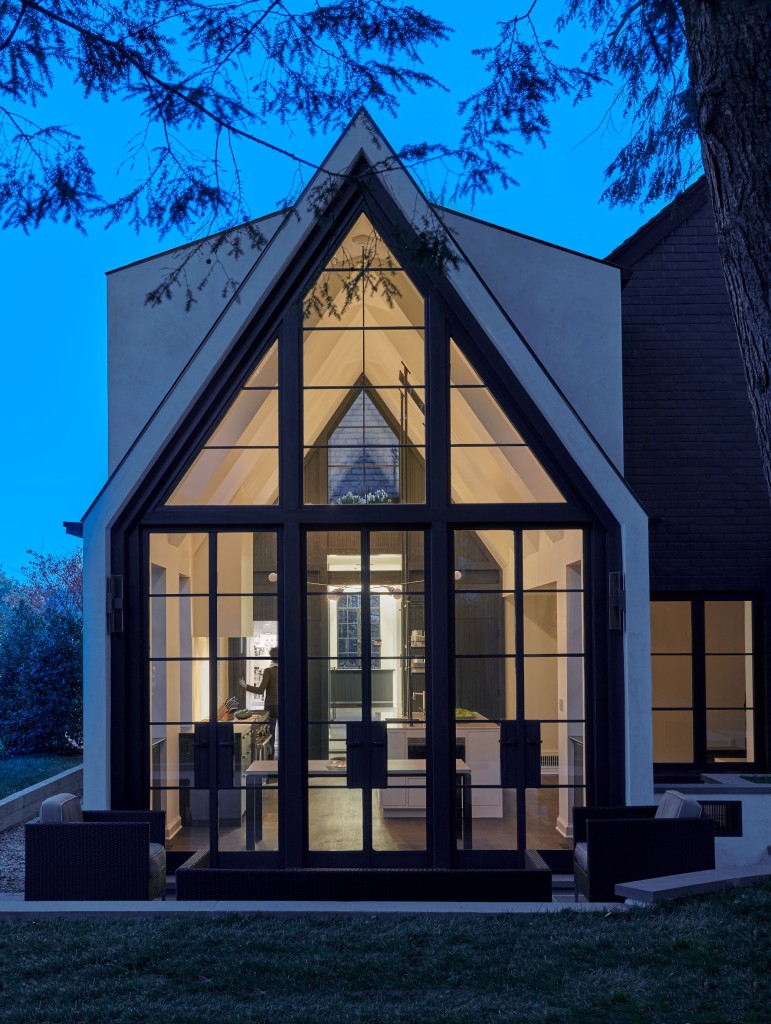 The rear addition on this Country Club Hills home features a vaulted ceiling and steel doors and windows that match the existing windows. (Photo by Anice Hoachlander)

The 1936 Tudor in Country Club Hills had seen better days when Eric Lyttle and his wife, Jill, bought it in 2013. Typical of houses from that period, it had a small kitchen tucked in the back, fussy details and a chopped-up layout. Eric, whose father is an architect with a master’s degree in historic preservation, saw the potential; Jill, not so much.

“The house had a ton of character, but it was quite dated,” Eric says. “It had a Queen Anne decor with a lot of floral prints and big heavy drapes. I really had to convince my wife, who’s not the daughter of an architect, that this house was worth it.” 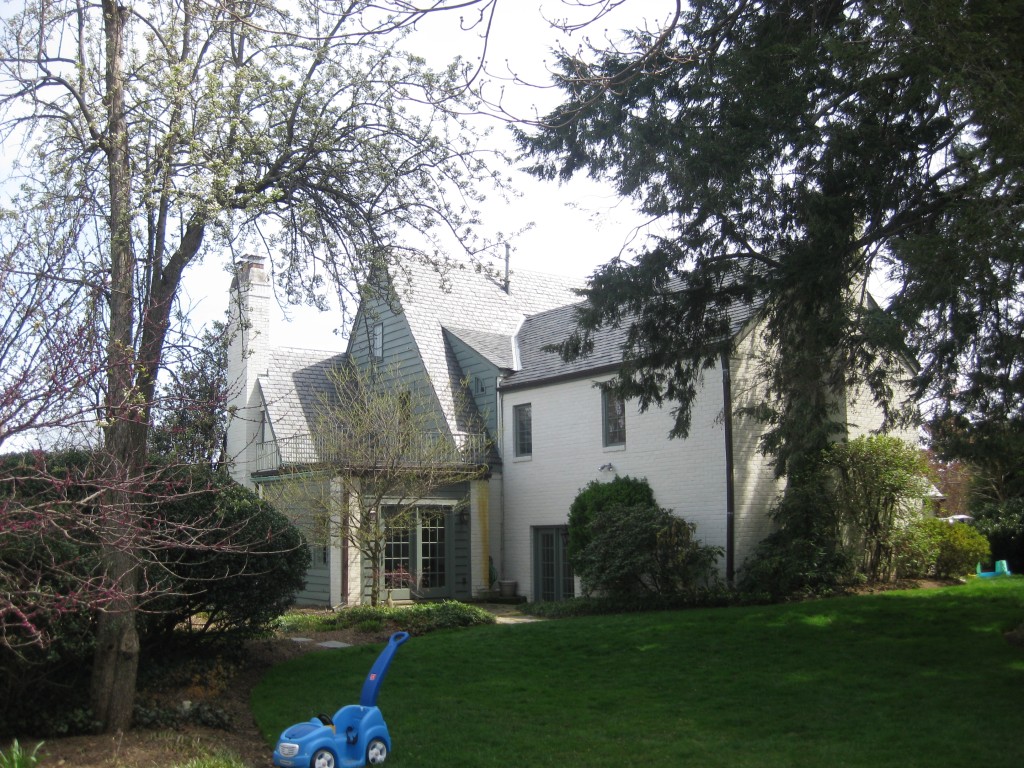 The Lyttles knew, going into the purchase of the 3,900-square-foot home, that they would eventually renovate to keep the good bits—such as the slate roof, copper gutters and huge steel windows—and modernize the house to get rid of the flaws. They just needed to figure out when the work would take place and who would be tasked with the job.

Five years later, that assignment went to architect Donald Lococo, whose eponymous Georgetown firm is rooted in classical design, but over time has transitioned its focus toward contemporary architecture. Who better to blend the two in an 82-year-old house?

The challenge, says the architect, was “trying to maintain some semblance of the original, especially in the front, and its place in the neighborhood, while also inserting a modern addition for the 21st century.” 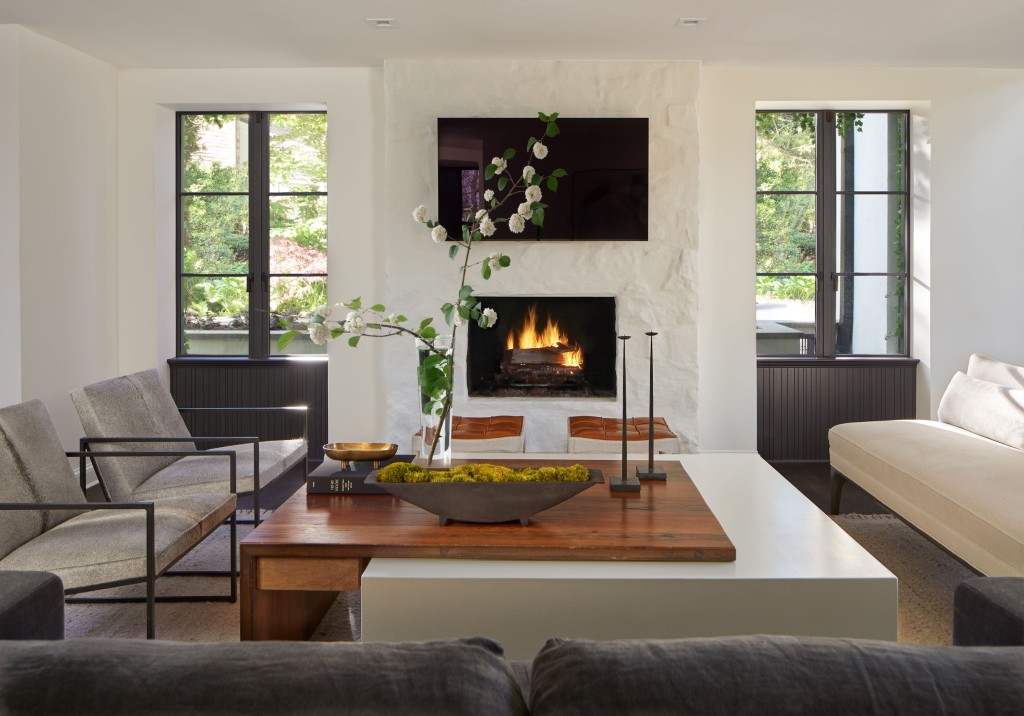 Lococo walked the house to determine which architectural details were worth keeping and how to reinterpret those elements for a present-day family of four (the Lyttles have two daughters, now 9 and 6). Some rooms—such as the dining room and sunroom on the first level, and the three bedrooms and two bathrooms on the second level—held their place in the floor plan but got a refresh. 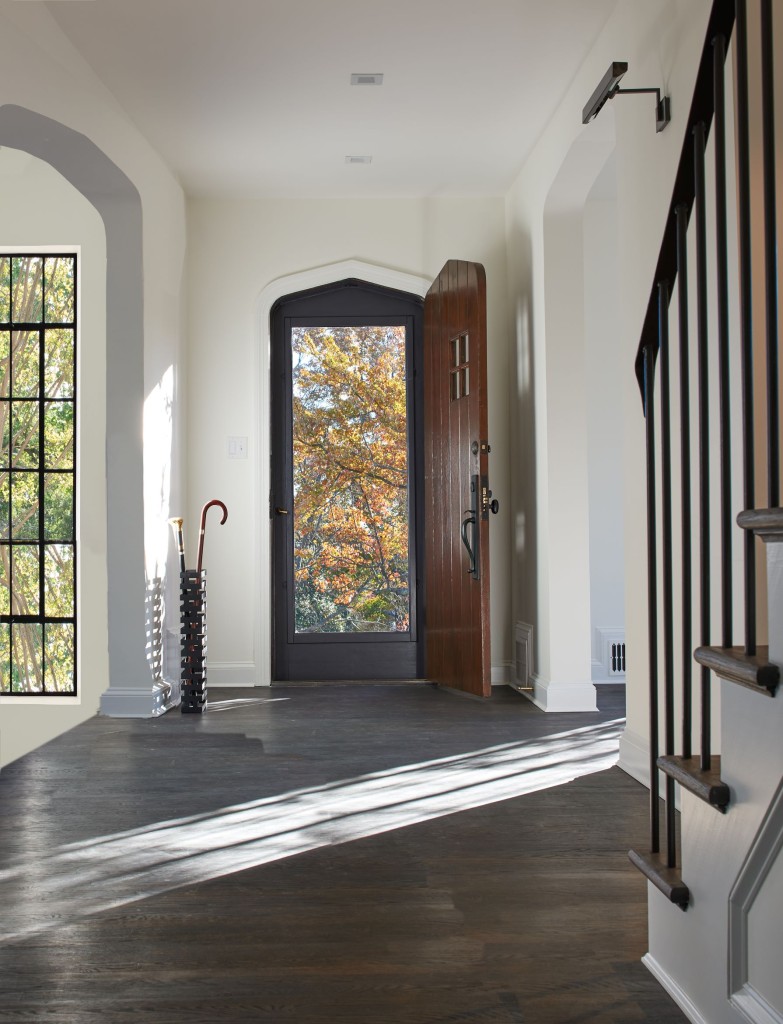 Stripped of its former wainscoting and crown molding, the foyer now features matte black hardware and clean recessed lighting. Oak flooring throughout the house has a charcoal stain. (Photo by Anice Hoachlander)

Other vestiges of the old house went away. Working with Mark Knebel of Clemens Builders in Bethesda, Maryland, Lococo eliminated the more traditional features—the original staircase balusters, handrail and newel post, for example, as well as old molding and wainscoting. “As we removed that trim, the nature of the Tudor revealed itself,” he says, “which was essentially the plaster walls, the metal windows and the original arches.” 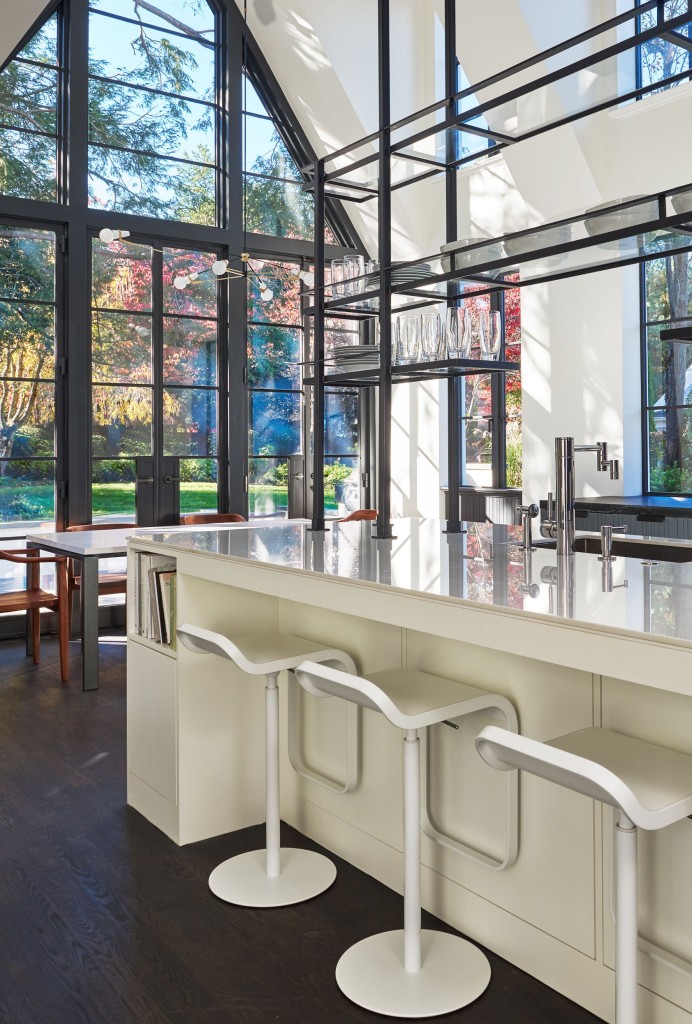 The bulk of the structural work, including a sizable addition, applied to the rear of the home, where Lococo reconfigured a powder room, study and office, and inserted a double-height kitchen, family room, breakfast room, pantry and laundry. On the second level, he reorganized the primary suite, incorporating an existing set of dormer windows into the design. Today, the owners can stand in their bedroom and see into the kitchen below.

A renovated and expanded basement now includes a bigger (three-car) garage, along with a recreation room, bedroom, bathroom and exercise room. 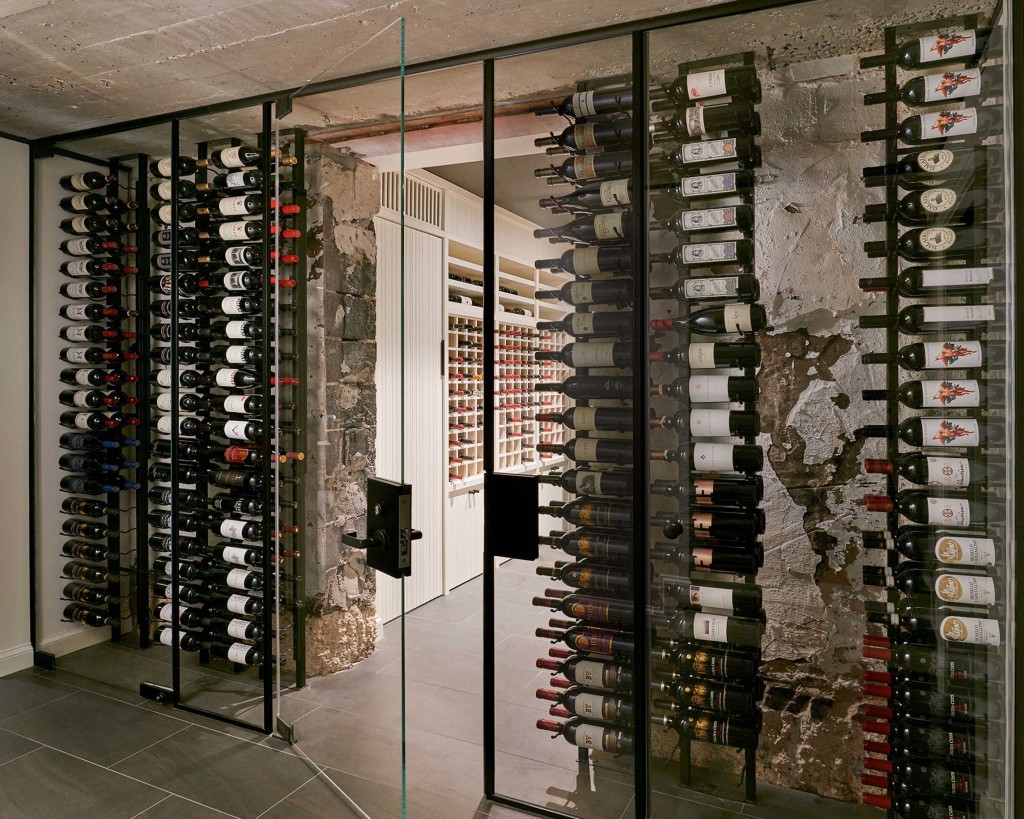 The crowning jewel of the lower level is a wine cave tucked into what was formerly a dank, concrete workroom for the previous owner, an avid fly fisherman. “It was dark and had bad lighting, so we converted it into a wine cellar,” says Eric, an attorney. (Jill is an electrical engineer by training and a former Kenmore Middle School math teacher.)

Inspired by a detail the Lyttles had seen at the Louvre in Paris, the climate-controlled room strikes a dramatic pose with board-form raw concrete walls and floor-to-ceiling glass-and-steel doors. It holds 1,000 bottles of wine. 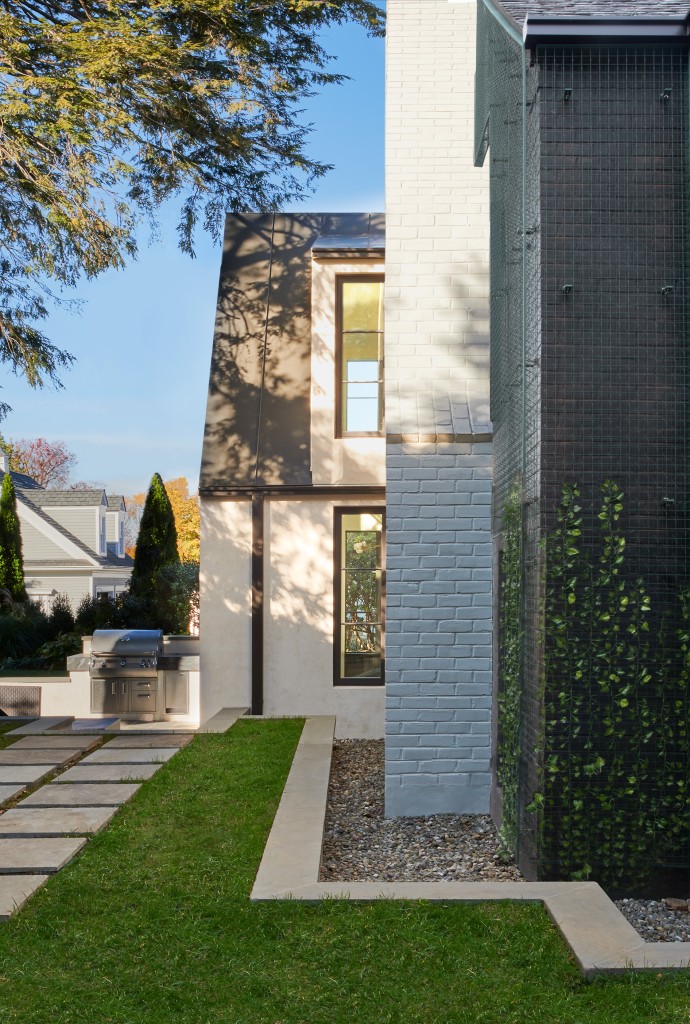 Climbing ivy will eventually cover a green screen on the exterior. (Photo by Anice Hoachlander)

The renovation also included new exterior features by landscape architect Jennifer Horn, such as a refaced front terrace, a fire pit opposite the family room, a new terrace adjacent to the breakfast room, custom metal screens with climbing English ivy and a green roof.

“We absolutely love it,” Eric says of their revamped classic. “It really serves our family. Quite frankly, we like when people come in and, even if it’s not their style, everybody understands that we were trying to do something special.” 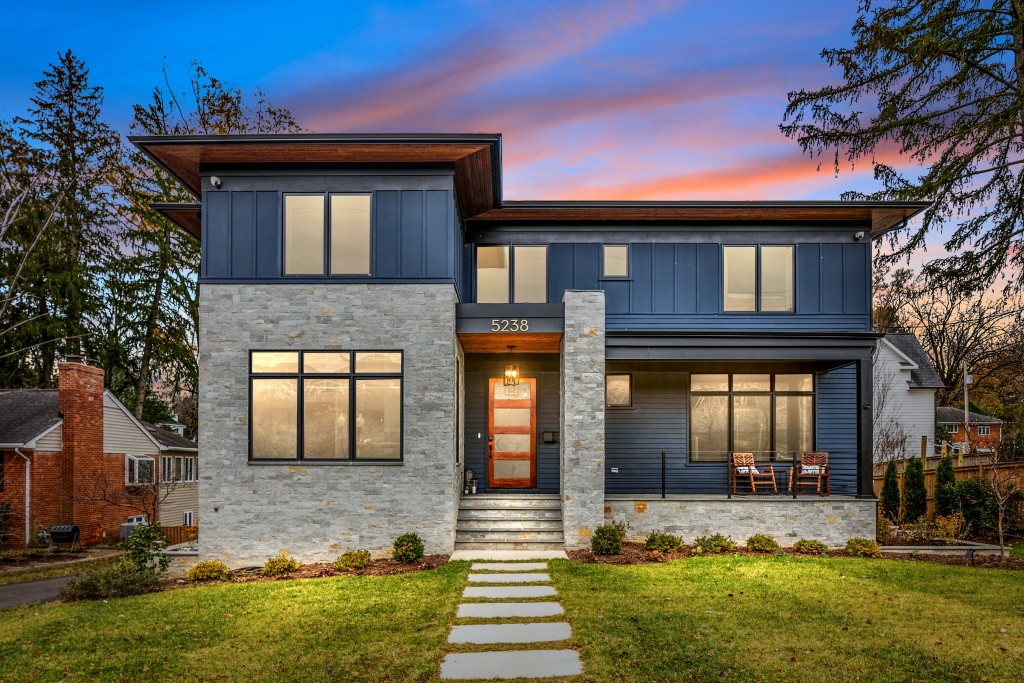 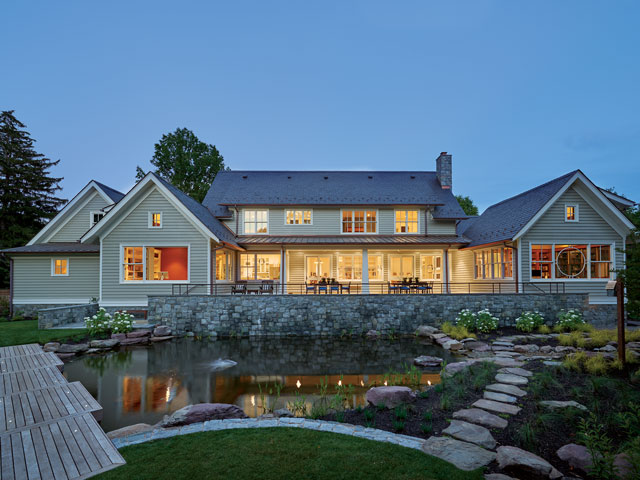 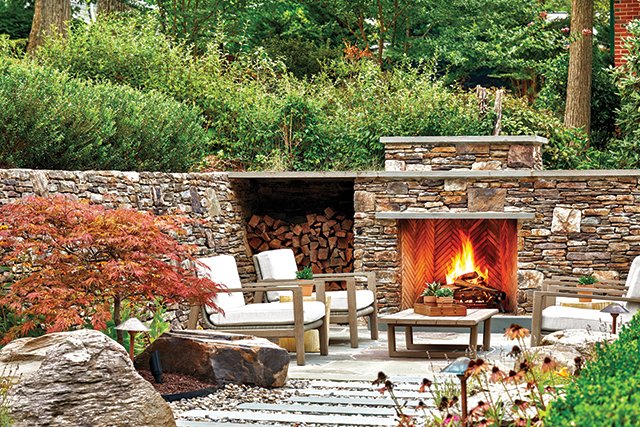