Her Family Is In Ukraine. She’s In Falls Church.

Sofiia Hordiiuk's hometown in southeastern Ukraine is occupied by Russian forces. She worries for her parents and sisters. 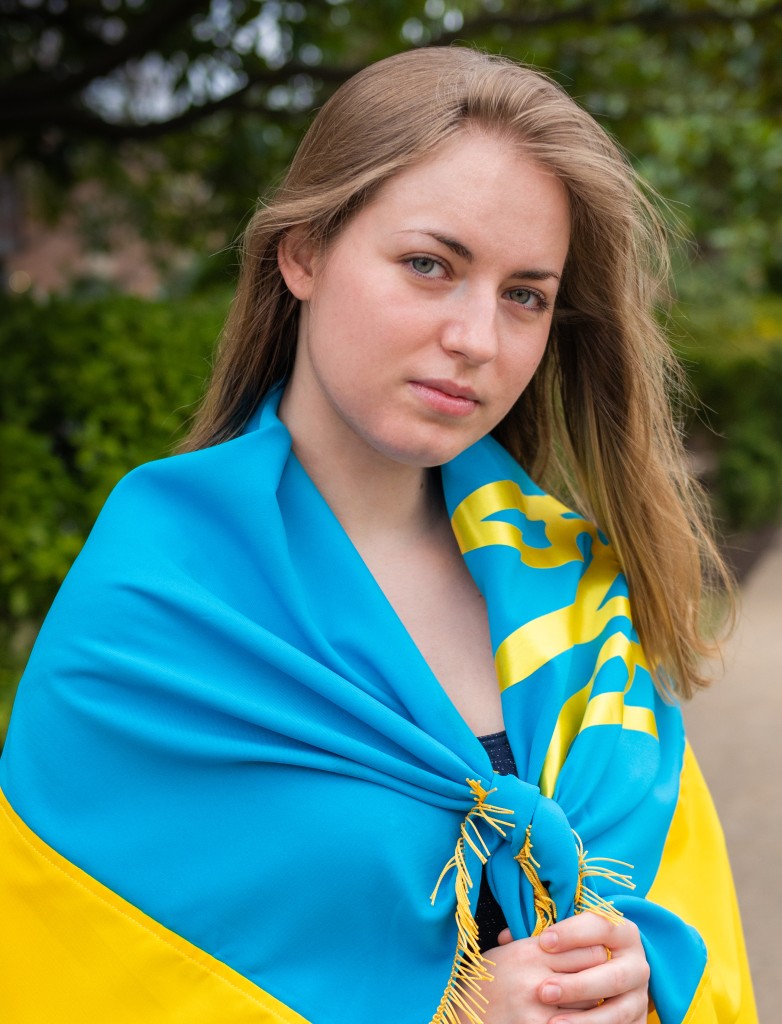 “She reminded me of a boxer,” says photographer J. Michael Whalen, who shot this portrait in Arlington on Feb. 27, three days after Russian forces crossed the border into Ukraine. He knew his neighbor had been attending protests in D.C. and wanted to capture her resilience. “[She] just conveyed the fighting spirit of the people of Ukraine.”

A polyglot barista who earned her bachelor’s degree in Spanish language and literature from Arizona State University (she also is fluent in English, Russian and Ukrainian), Hordiiuk has lived in Falls Church since 2017 with her husband, Manuel Mayor, an assistant property manager. Together, they have created a comfortable life. But at the time of this interview, Hordiiuk, 25, felt torn between the desire to return to the country of her birth and her current efforts to fight Russian aggression from afar.

Her hometown, Energodar, which she last visited in 2021, is occupied by Russian forces. Her father, Vladimir, an electrician, and her mother, Alona, an industrial painter, are both employed by the Zaporizhzhia nuclear power plant. When the plant was overtaken and its offices set afire in March, her father and his colleagues hid inside the building for more than 24 hours before finding an opportunity to escape.

“News changes so much that I barely can keep up,” Hordiiuk says. She contacts her parents frequently through Viber, a Japanese messaging app, although the Wi-Fi access is spotty in Ukraine and the internet is often blocked. It’s a good day when she manages a video call.

Since the start of the war, her parents’ updates have been unsettling: Russian soldiers driving vehicles emblazoned with the pro-Putin “Z” harass and assault citizens; a local man who was organizing donations of supplies disappeared under suspicious circumstances; grocery shelves sit empty, save for rotten potatoes and stale bread.

Hordiiuk is incensed by Russian propaganda about the war. “It’s a constant lie, it’s like a horrible fairy tale,” she says, exasperated by those who believe the disinformation.

In her dreams, she finds herself back in the grade school she attended as a child in Ukraine. When Russians break in and vandalize the classroom, she confronts them and demands: “You think you own this town? Clean up this mess.”

This recurring nightmare reflects the reality of her two teenage sisters, who remain in beleaguered Energodar with their parents. Anna, 16, is a competitive sprinter. “She’s doing okay,” Hordiiuk shares. “She’s very tough, because she has a sense of humor.”

But her voice softens when she speaks of her youngest sibling, Margarita, a sensitive and artistic 13-year-old. Wracked with anxiety, Margarita is neither eating nor sleeping well. “My mother tucks her in and lets her know she will be okay.”

In late March, Hordiiuk remained hopeful that Ukraine—with foreign aid and military assistance—would oust the Russian army soon enough for Anna to compete in a European track and field tournament this summer.

She’s been saving money to send to loved ones and donating to the Ukrainian army through charities and crowdfunding sites, following the lead of her aunt, who posts on social media about helping refugees fleeing to Poland.

“I’m just doing my best and working, because what can I do if not work? I don’t have this luxury to not do anything,” she says. “But I can keep hoping for the best.”

For a list of organizations providing humanitarian aid to displaced Ukrainians, visit arlingtonmagazine.com/support-ukraine-fundraising-donate/