Up Close and Personal with the President and Michael Phelps

How Arlington photographer Doug Mills earned a front-row seat at the Olympics and a boarding pass on Air Force One. 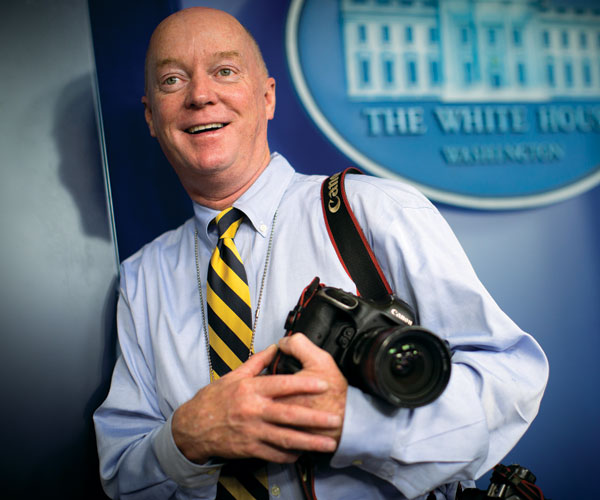 Lives in: Cherrydale, with his wife, Kate.

Credentials: A winner of two Pulitzer Prizes, Mills was the only still photographer to accompany President George W. Bush on Air Force One’s return flight to Washington, D.C., on Sept. 11, 2001. He joined President Obama on his 2015 tour of Africa and has photographed multiple Olympic Games, Super Bowls and World Series.

Home Grown: I grew up in Arlington, where I attended Fairlington Elementary, Oak Ridge Elementary, Gunston Middle and Wakefield High School. Beginning in middle school, I’d go to the Arlington Career Center for three hours a day as part of a special Arlington Public Schools program. That’s where I first learned about photography.

First Jobs: During high school I was a trashman at Fairlington Villages, which I loved—early hours, but good money and lots of fun people to work with. I also worked at the Drug Fair near Wakefield High School. I worked in the photo department and learned how to develop film.

Up Through the Ranks: As a high school student I shot high school sports and Overlee swim meets for the Alexandria Journal. Later, when I was studying photography at Northern Virginia Community College, we had a guest speaker from United Press International. I showed her my portfolio, got an interview and wound up doing some freelance work for UPI. After a couple of years I went to work for The Associated Press.

I was there for 15 years and worked my way up to chief photographer. In 2002, I was hired by The New York Times to work in its Washington bureau. 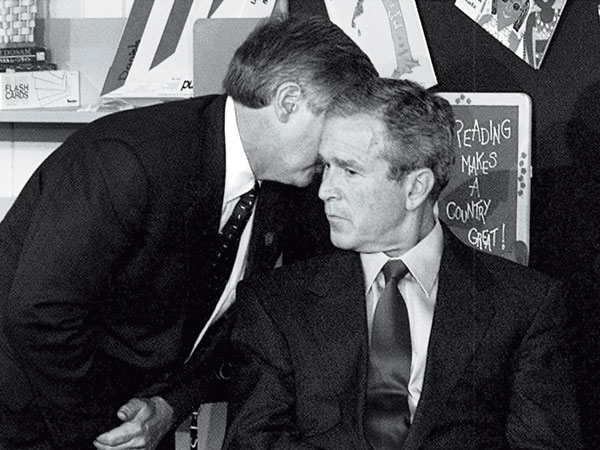 Mills has photographed some of the most significant events in modern American history, including the moment on Sept. 11, 2001 (above) when President George W. Bush learned that the nation was under attack. A short time later, Mills captured the president embracing firefighter Bob Beckwith (below) amid the wreckage of the World Trade Center. Photos by Doug Mills / AP Images 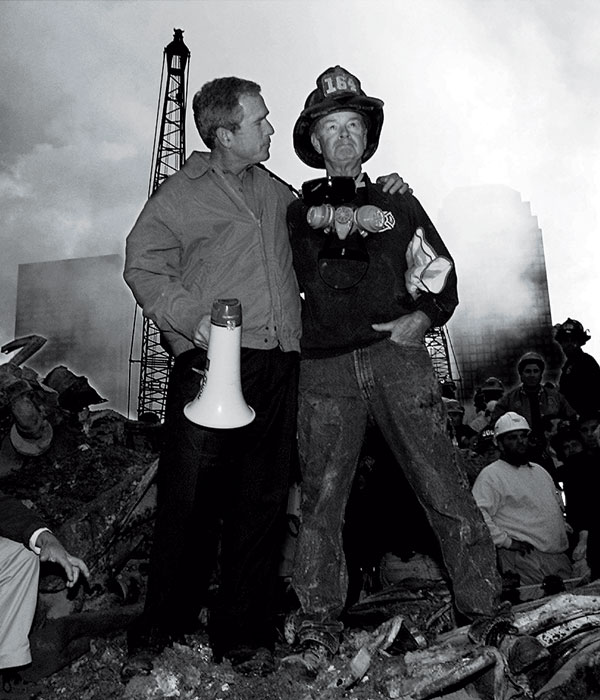 Candid Camera: Wireless remote-control cameras have made it easier to get great shots from all kinds of angles. I like to arrive early [at the White House] and put a camera high above the president or behind a plant in the Oval Office. I used multiple remote-control cameras at the finish line at the 2012 Summer Olympics in London—some at ground level and some higher up in the stadium. I had them above the swimming pool for a bird’s-eye view. I’ve covered almost every summer and winter Olympics since 1992.

Politicians and Athletes: When you’re around a president, you get to know his mannerisms, what he likes to do, when he’s happy, sad or stressed. Photographing athletes is more challenging because you don’t know them as well and so much of what they do is unscripted. Still, shooting Michael Phelps as he wins gold medal after gold medal is a pretty great thing to be a part of.

Air Time: I just happened to be with President Bush in Florida on Sept. 11, and was selected to be the only still photographer to accompany him as Air Force One flew to Offutt Air Force Base near Omaha and then back to Washington. Looking back, I realize I was part of history. One of my daughter’s friends recently told me, “I’ve seen one of your pictures in my history book.”

Oops: Once, while covering flooding down around the Tidal Basin for UPI, I fell into the water—about 10 or 15 feet deep—with all my gear on. I had to find the side wall and climb my way back up. Another UPI photographer started snapping pictures of me as I climbed out, all my gear ruined. Professional courtesy, I suppose. I could have killed him.

Goodbye, Darkness: Digital photography has changed the news business dramatically. Previously, when covering the president, we’d build a darkroom in a hotel bathroom, which was a very time-consuming job.

When I covered the first Republican presidential debate in August, I shot and transmitted pictures of the 10 candidates as they stepped onto the stage, and the images were received by The New York Times before they reached their lecterns. I can’t imagine going back to shooting film.

Free Time: I probably work more than I should, but when I take time off I love spending it with my girls [ages 23 and 21] and my wife. I’m an avid runner—I run every morning and I think that’s what keeps me young.

My family goes to the beach in Maine every year and I love that, too.

Advice for Amateurs: I had a mentor when I was younger who used to say, “Brain the frame.” It’s something I do to this day. Use your brain to frame what’s inside the viewfinder and use every bit of it to your advantage. You’re in control of that frame.

Worth a Shot: For years now, people have been saying that photojournalism is a dying business. I disagree. I tell young people that there’s always going to be a need for good photographers in this world. Whether you want to shoot news, sports, weddings, fashion, nature—if you have a passion for it, you can make a living at it. But it’s going to take perfection, because everybody has a cellphone. Everybody has a camera.

Rick Schadelbauer is a freelance writer living in Arlington. His first camera was a Kodak Hawkeye Instamatic, mail-ordered with breakfast-cereal box tops.