Local growers and garden experts are cultivating this DIY trend in Northern Virginia. 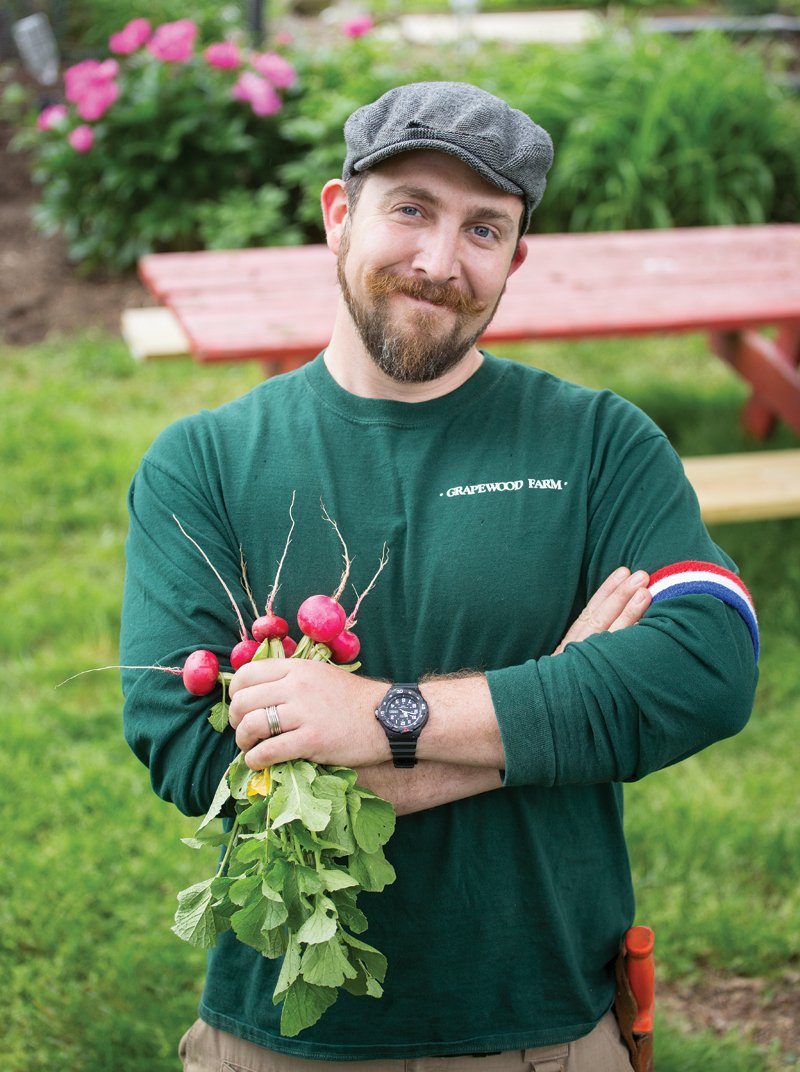 Standing on a tidy brick patio in Fairlington, gardening consultant Rebecca Carpenter explains why the homeowner will be ripping out her rosebushes this year.

Pretty as their petals can be, the roses just don’t compare to the tomatoes, peppers and leafy greens that will sprout, midsummer, from the thick border of dirt beds that is slowly taking over the home’s postage-stamp-size yard.

“If you come back and look at this in June, you’ll be blown away,” Carpenter says during a frosty visit in early March.

Soon enough, tomatoes will be racing cucumbers up the wooden fences, leaving their slats barely visible behind the greenery. Potted rosemary, dill, parsley and lavender will form fragrant bushes at the patio’s center, and the owner will be harvesting more vegetables than she can eat.

“It’s just beautiful,” Carpenter says, holding the initial renderings for this edible garden in her hands and remembering how it—along with her burgeoning business—came to life last year. 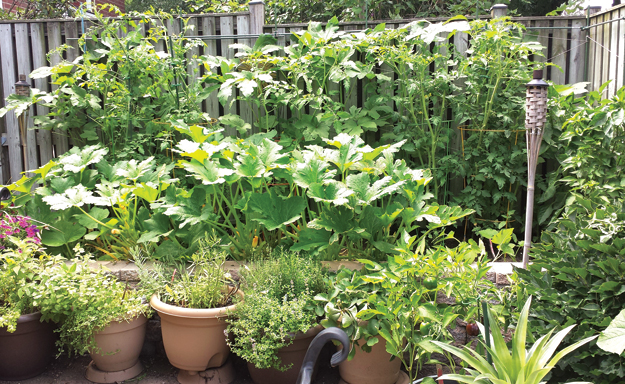 A corporate strategist by trade (her clients once included Disney and National Geographic), Carpenter left that world in 2015 to cultivate a new venture from her own nearby home in Fairlington. Now in its second year, her company, Sprout, helps residential clients turn their lawns, patios and kitchen windows into food-growing operations. “The minute I launched it, we had more business than I could keep up with,” says Carpenter. “That’s how I knew this was a trend that’s not going away.”

The urban agriculture movement is hardly unique to our area, but it has found particularly fertile soil in and around Arlington.

Some devotees harvest tomatoes and herbs from sunny container gardens. Others have converted large portions of their yards to grow crops ranging from summer strawberries to fall kale.

Still others who lack the space or sunlight at home have turned to one of the 300 community garden plots maintained by Arlington County, only to land on a waitlist that’s 500 names long—a number that’s more than doubled in recent years. (The county manages seven community gardens and offers a guide for those who want to start their own.) 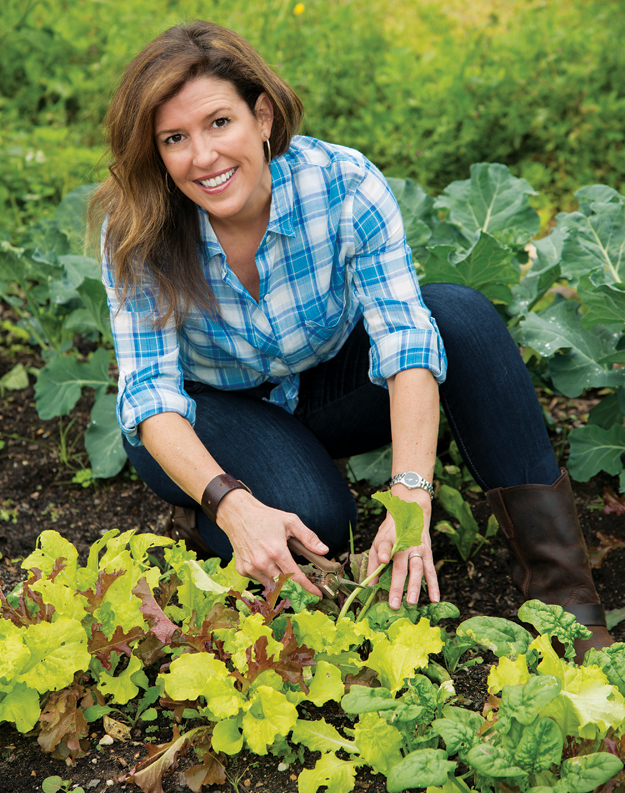 To keep pace with demand, Arlington County park officials have been adding new plots wherever space allows. They’ve begun asking developers in the most densely populated corridors to consider integrating gardens into plans for new condos and apartments. At the same time, they’re talking to existing housing developments like AVA Ballston about adding gardening space for tenants.

“Rather than buy more land, let’s help people see the opportunities that are here and use them,” says Kimberly Haun, who joined Arlington County’s Department of Parks and Recreation in 2009. “The big issue, of course, is small-space production.”

As the county’s urban agriculture coordinator, Haun oversees the community garden plots, helps run local farmers markets, and connects local gardeners to the Virginia Cooperative Extension and its educational programs. She says space is a recurring topic in meetings with groups like Arlington Friends of Urban Agriculture, which formed in 2015. The conversations aren’t about scouting vacant swaths of land—there aren’t many to be found—but rather about innovating new methods and platforms for growing.

A couple of miles away, students at the Arlington Career Center on South Walter Reed Drive are building an aquaponics system to raise fish and hydroponic plants inside an existing greenhouse.“We’re really trying to fit into this very vibrant community and compete with all the other open-space needs,” Haun says.

Arlington’s first modern community gardens took root in the 1970s. The county closed a couple of them when interest waned in the ’80s and ’90s. But Haun says the seeds were replanted in 2009 when first lady Michelle Obama appropriated 1,100 square feet of White House lawn for food production, putting urban farming in the national spotlight.

“If I had to look at one thing that kicked things into high gear, it was that,” Haun says of the first family’s decision to grow food on-site. “The waitlists [for garden plots in Arlington] were reasonable, and then they just boomed.”

Jerry Brill, 82, has lived through the boom and bust days of Arlington’s edible gardening scene. Since 1981, he has been cultivating a small patch of soil at the Fort Barnard Community Garden, which runs the width of a city block with 70 garden plots, many of them split between a pair of gardeners. It’s located a mile and a half from Brill’s condo in Columbia Forest.

While the produce hasn’t changed much over the years (tomatoes, peppers and squash remain reliable crops for our region), the setting has. Organizers have recently begun competing for national grants to spruce up the garden property, and they’ve brought in rain-collection barrels to help with irrigation.

With these improvements, Fort Barnard has attracted a handful of certified Master Gardeners—particularly those who don’t have yard space where they live. And the people tilling the soil aren’t just retired folks craving a little fresh air and sunshine.

“The gardening audience was more mature at the beginning, but now we seem to have a lot of young people with children,” says Brill, who sometimes spends the entire day at his yard-away-from-home. “They’re in the farm-to-table mode of thinking.”

David Sachs, 35, who farms a neighboring plot, carries that mind-set. “In Arlington we have an educated population that is financially stable,” he says. “There’s a natural progression: If I can pay for better food, why not? And then, why can’t I grow it?”

In January, Sachs left his Washington job as senior photo editor for the Service Employees International Union to pursue farming full-time—both on his family’s 500 acres in Montross, Virginia, and at the plot he maintains in Fort Barnard. (He’s since opened a photography studio to supplement his income and plans to start selling his homegrown produce next year.)

Sachs counts himself among a new crop of food growers who are Googling their way around the garden and rediscovering ancient methods. He was already experimenting with backyard farming at his home in Douglas Park when a neighbor offered up her shared plot at Fort Barnard in 2010.

Gladly accepting this newfound patch of soil, he decided to try a technique he’d learned about at a perma-culture conference on the West Coast. To prime the garden bed, he dug more than a foot deep and laid 400 pounds of rotten wood into its base—the idea being that the decomposing materials would release organic materials into the soil over time.

Fast-forward six years and his plan seems to have paid off. One finds nearly 20 varieties of lush vegetables packed into his 20-by-30-foot plot, including heirloom tomatoes, squash and lemongrass, plus a few “cover crops” that are planted solely for pollinators.

In addition to food, Sachs says, farming has yielded some valuable lessons for his 10-year-old son, Mo, that only time in the dirt can teach: “I wanted to step back from the corporate rat race, spend time with my family and be more present in my son’s life. He planted almost everything. What a wonderful thing for him to taste that first pea of the season.”

Christy Przystawik still remembers her chance encounter with organic-foods pioneer Nora Pouillon. It was January, and the D.C. restaurant where Przystawik worked at the time was serving corn—which, Pouillon pointed out, was entirely out of season.

“I thought, Wait. She’s right,” says Przystawik, who would go on to become the head chef at José Andrés’ Café Atlántico, where she geared the menu toward seasonal ingredients and met her husband, Tom. In 2007, the couple left to start their own restaurant, Food Matters, in Alexandria, once again using seasonality and local sourcing as guiding principles.

Both restaurants have since closed, but the Przystawiks remain dedicated locavores. Today they have four kids—ages 15, 14, 8 and 6—and Christy has a new job as the school garden coordinator and library assistant at Campbell Elementary School in Arlington. “Now, I’m growing food at a public school where a lot of kids don’t even know the names of vegetables,” she says.

In this role, she works within the school’s “expeditionary” curriculum to teach students to grow, harvest and cook food from on-site gardens. Her position is paid for with a mix of PTA money and grant funding.

She thinks more Arlington schools should offer such programs. “It’s really incredible to see the confidence children have when they learn how to grow, harvest and eat their own food,” she says.

Meanwhile, at their home in Claremont, the Przystawiks have become what you might call “urban homesteaders.” Aside from the meat they order from Whiffletree Farm in Warrenton and the fruit and dairy they buy from farmers markets, the family of six lives almost entirely off of a backyard garden in the summer months. They ferment their own kombucha and kefir, share their starters (live cultures) and offer gardening advice to neighbors who are on the fence about their own growing ventures.“We try to get the community to be more self-sufficient,” Przystawik says. 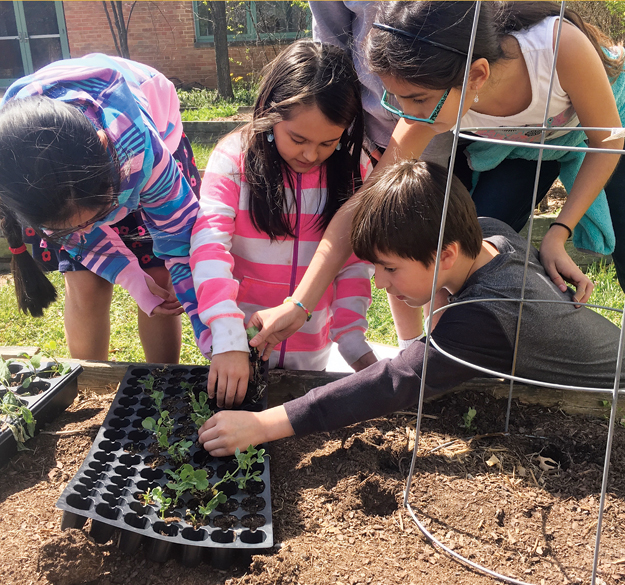 Microfarming isn’t just a hobby for comfortable suburbanites. The recent uptick in local food production has also been a boon to many of Northern Virginia’s neediest residents, with churches like Columbia Baptist in Falls Church and nonprofits like the Gardeners’ Share in McLean’s Lewinsville Park managing community gardens to help fill area food pantries.

Last year, the Arlington Food Assistance Center (AFAC) received more than 15,000 pounds of donated produce from individual growers and community-based gardens, according to Puwen Lee, AFAC’s associate director of programs. The nonprofit’s Plot Against Hunger program provides seeds (and sometimes space) to gardeners who are willing to grow food for donations. 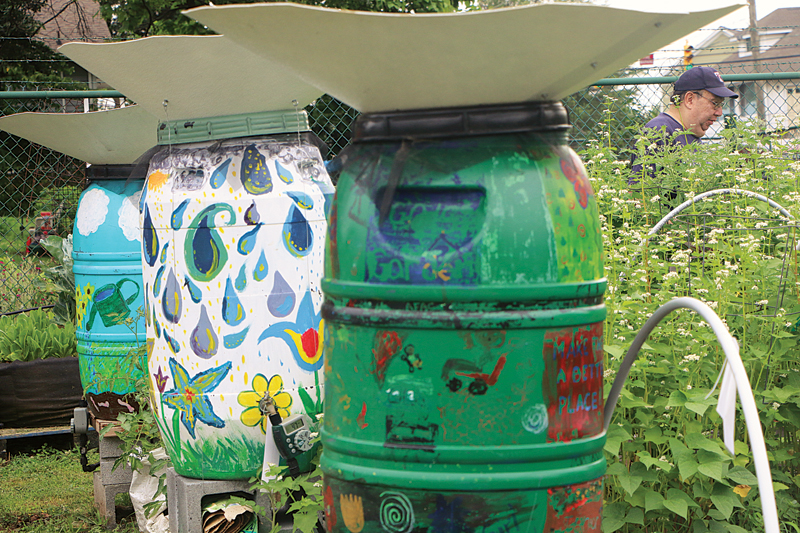 Many of AFAC’s 50 or so participating gardeners have gotten creative about where they farm—turning the grounds outside the Arlington Central Library and the perimeter of a nearby tennis court, for example, into fertile ground for tall stalks of sweet corn, as well as peas and bean plants that can climb up a chain-link fence. AFAC is also experimenting with “nomadic” gardens that grow in transportable bags and can be moved temporarily to undeveloped land.

In a recent study by the Johns Hopkins Center for a Livable Future, lead author Raychel Santo concluded: “While urban agriculture alone will not solve the many dilemmas of our food system, it can be part of a constellation of interventions needed to transform the food system into one that is more socially just, ecologically sound and economically viable.” 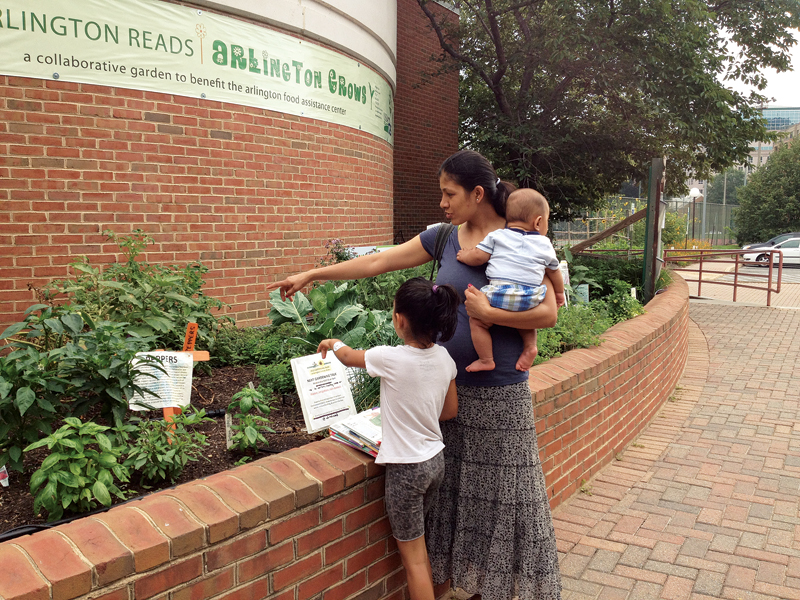 Lee, who maintains a garden at her own home in Waverly Hills, agrees. “I think it’s a good way to start a conversation about food security,” she says. “Eventually, it’s going to affect everyone.”
Last year, Lee helped several AFAC recipients lug home 5-gallon buckets filled with tomato seedlings. Driving past an Arlington apartment complex a month later, she saw several of the plants thriving in a narrow strip alongside the building.

“They found this tiny space to produce a crop,” she says. “If you give someone a seedling, they will try to find a way to grow it.” 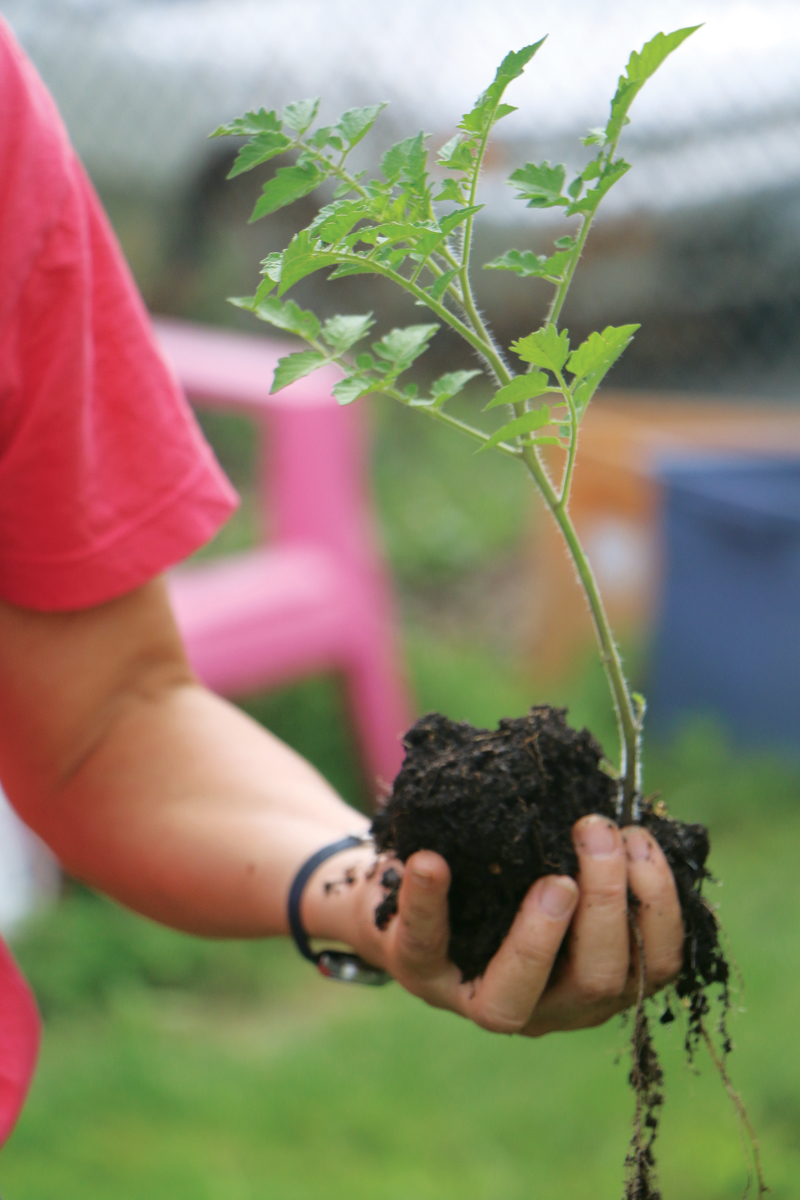 What to Plant Now

Hungry for fresh produce? It’s not too late in the season to get started, says Rebecca Carpenter of Sprout (www.SproutKitchenGardens.com). Plant these crops in mid- to late-summer for a fall harvest.

Plant directly into the ground as seeds:

Buy as seedlings to plant outside, or start from seed indoors before transplanting to the garden:

Whitney Pipkin is a freelance journalist and greenhorn gardener. Her work has appeared in the Washington Post, NationalGeographic.com and Smithsonian Magazine, among others. She blogs about food at thinkabouteat.com.