His Westover record store is a treasure trove for music lovers. 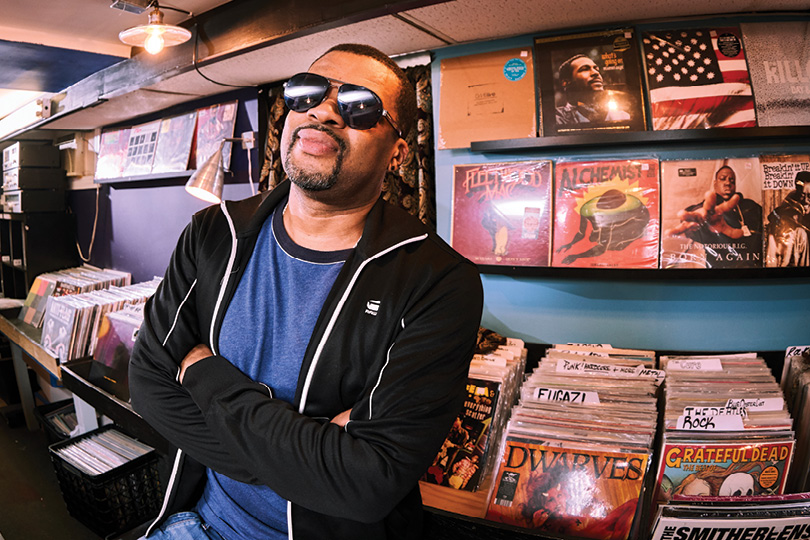 Editor’s Note: Blue Groove Soundz sustained damage during the July flash floods that ravaged many Westover shops and homes. The store has since reopened for business.

Lives in: Arlington and London

Résumé: Longtime entrepreneur from Chicago, now celebrating the 10th anniversary of his Westover record store, Blue Groove Soundz. Also runs a shop by the same name in London and just launched a record label (Blue Groove Records) that will cover multiple genres but go heavy on electronic/hip-hop. Foreman is a classically trained violist.

Early inspiration: My dad put the needle on the record when I was 5 years old. I was hooked. I’ve always been interested in that needle on a piece of vinyl and the quality of sound.

Quite a catalog: The entire Blue Groove discography totals more than 1.5 million records, with 20,000 to 30,000 in the store at any given time.

Personal collection: Maybe 400 to 500 records. It could be much more, but I favor quality over quantity. Some people collect any and everything. Not the case here.

Why Westover: It’s centrally located and a cool little community of different shops. Arlington has a diverse group of musicians. I love it here.

Go-to venues: The Anthem, 9:30 Club, Bossa Bistro + Lounge, Columbia Station. I did frequent Iota in Clarendon while it was still around. It was a great local spot, nationally known, with cool owners. It should still be here.

Vinyl’s comeback: It’s all about the physicality of having the album in your hand. You have the artwork, the whole experience. We’re getting back to our roots.

Work perks: Listening to music, picking out something you haven’t heard before and saying, “I wonder what that sounds like.” Also, young people coming in and being interested in vinyl. This new generation, a lot of people walk in and have never seen a record.