The must-see museum in Cape May, N.J., opened for in-person visits on Juneteenth of this year. 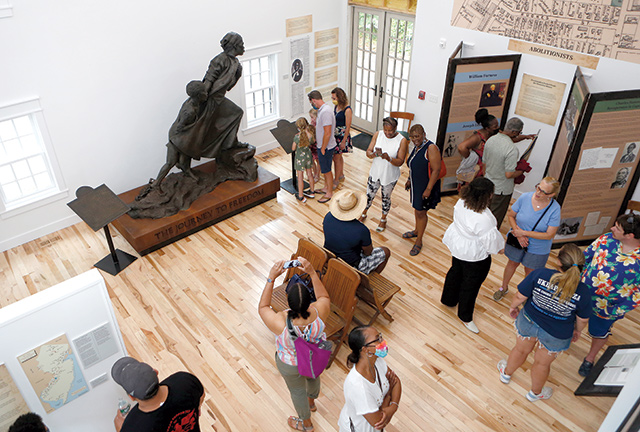 Named by Smithsonian Magazine as one of the most anticipated new museums of 2020, the Harriet Tubman Museum of New Jersey, located in Cape May, opened virtually last year and in-person this year on Juneteenth (June 19, the date that commemorates the end of slavery in the U.S.). The exhibits pay tribute to Cape May’s role in the Underground Railroad and Tubman’s life as an abolitionist and women’s suffrage activist. Tubman worked in Cape May as a cook and domestic worker in the early 1850s, raising money to return to Maryland’s Eastern Shore to rescue more enslaved people. The museum is housed at Howell House, formerly the parsonage for Macedonia Baptist Church. Interesting items include a signed first-edition printing of the 1872 book The Underground Railroad Records by abolitionist leader William Still, and several African masks and art pieces that belonged to the Rev. Robert Davis, a former pastor of the church who once lived at Howell House.

Additional exhibits include a timeline of Cape May’s Black history, a list of the once plentiful and varied Black-owned businesses, plus details on other notable residents, such as Stephen Smith. After buying his freedom, Smith went on to run a successful coal and lumber business and became an active conductor in the Underground Railroad. Admission is $10; $5 for ages 10 and younger. Reservations are recommended.