“Are you fist-pumping to Dear Evan Hansen?” the instructor calls out to a guy at the back of the room before launching into a lengthy conversation about the Tonys.

This is SoulCycle, the spin studio championed by the likes of Kelly Ripa, Kevin Bacon and Michelle Obama that opened its first Virginia location at Clarendon’s Market Common last Friday. With this 55-bike outlet, the New York-based company founded in 2006 adds one more to its 90-plus studios in the U.S., Canada and the UK. And I’ll be darned if I wasn’t going to give it a try.

With about four seconds to spare before the start of my trial class, I whisk through the studio’s double doors, its exterior mural still actively being painted. I complete an electronic waiver and am handed some rather dowdy-looking gray cycling shoes. “C’est la Vie” by the late-’90s Irish pop group B*Witched is blasting, which feels like a pretty good motto for however this class may go.

I step into the uber-dark studio and find my assigned bike is already occupied (egad!). After informing a staff member in a blinding yellow T-shirt, several similarly shirted folks emerge to locate a new bike and frantically attempt to help snap my shoes into the pedals (which, if you’re new to spinning, can easily take five minutes). The teacher—a svelte, commando of an instructor in her late 20s/early 30s—stalls by asking the names of each student, and I fear she may launch into some stand-up. But with a couple clicks, my shoes are secured and we’re ready to roll (sorry).

As we move to an upright ride position and crank up the resistance on our bikes, the instructor compares the next hour to both Vegas (what happens in here stays in here) and a treehouse in The Baby-Sitters Club, “except it allows in men.” Speaking of, while there are about three or four men in the room, the primary participants this evening are definitely 20-something women.

And it is a fashion show in here. High-waisted leggings and sports bras masquerading as tops are de rigueur. And yes, makeup is a must, even if the lights are so dim it’s barely visible.

Eminem’s abrasive “Lose Yourself” starts pumping through the speakers and things get serious. We alternate between cycling as fast as humanly possible and slogging through higher-resistance pedaling as I let go of any hope of getting out of here without sweating. 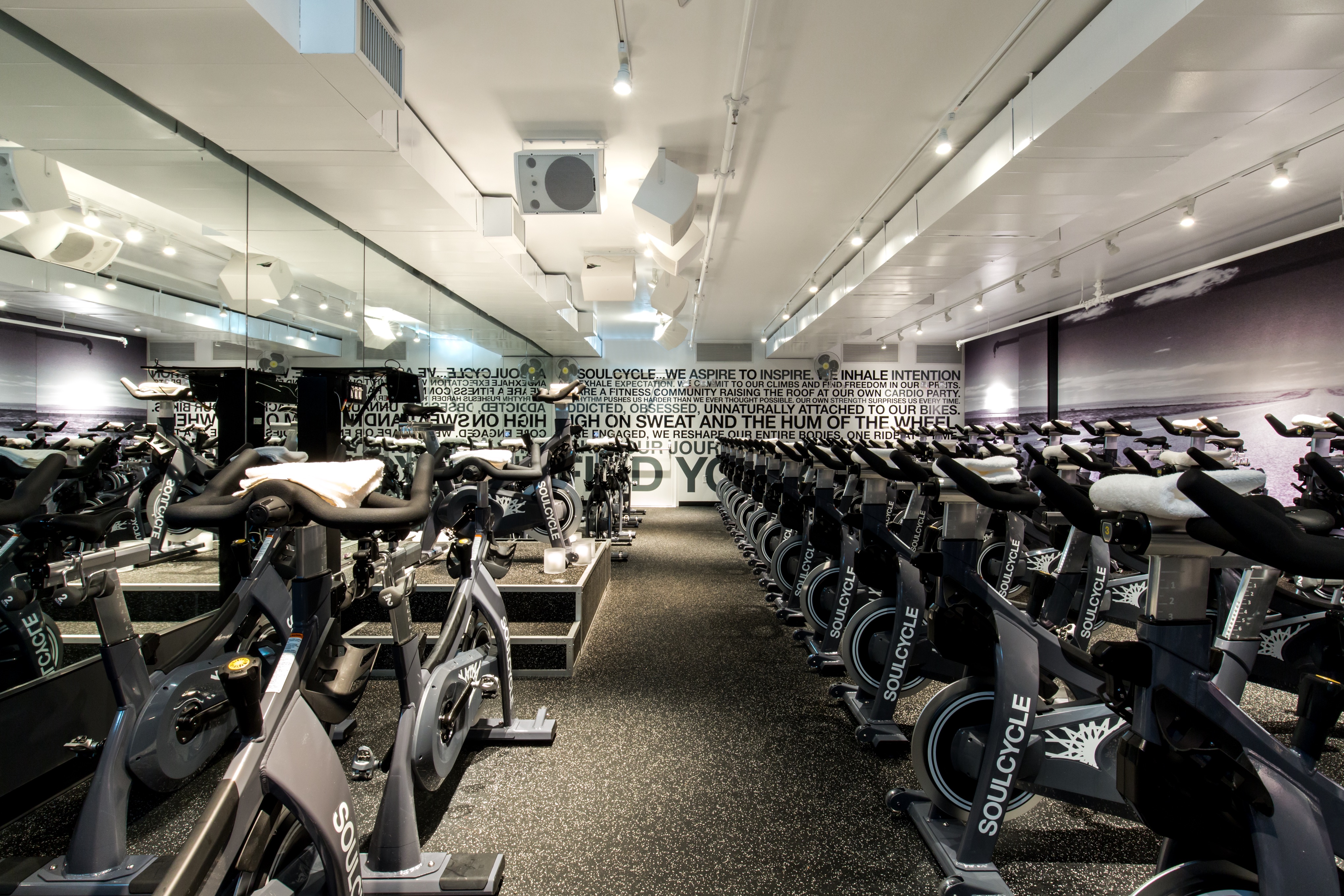 Unlike many fitness chains, there are no screens in the studio. Instead, we’re each left to guess how our effort measures up against our neighbor’s. That’s the point, says our instructor, presiding over her DJ laptop embellished with a “Zen as F#ck” sticker.

She offers a higher purpose for our ride this evening:

We’re on stationary bikes here, just exercising—not saving the world. But when we leave here, that’s when we save this [messed]-up world.

I’m starting to enter a state of euphoria—a cyclist’s high, perhaps?—about two-thirds of the way through the 45-minute class. Yet I’m pulled right out by the sudden directive to punch our hand weights in the air. After a few seconds of panic, I discover two five-pounders attached to the back of my bike and join the crowd.

As class winds down, we’re asked to quietly say something nice to ourselves, and to “say it till it sticks.”

I’m about to dismount until I realize she means “home” figuratively. Yes, we are still riding, but this is our final effort. I try to muster my last remaining units of energy to the rhythm of a contemporary show tune.

It’s time to stretch, and of course I cannot remove one of my shoes from the pedals, so instead I pull my foot from the shoe and leave it on the bike. It can stay there for all I care. 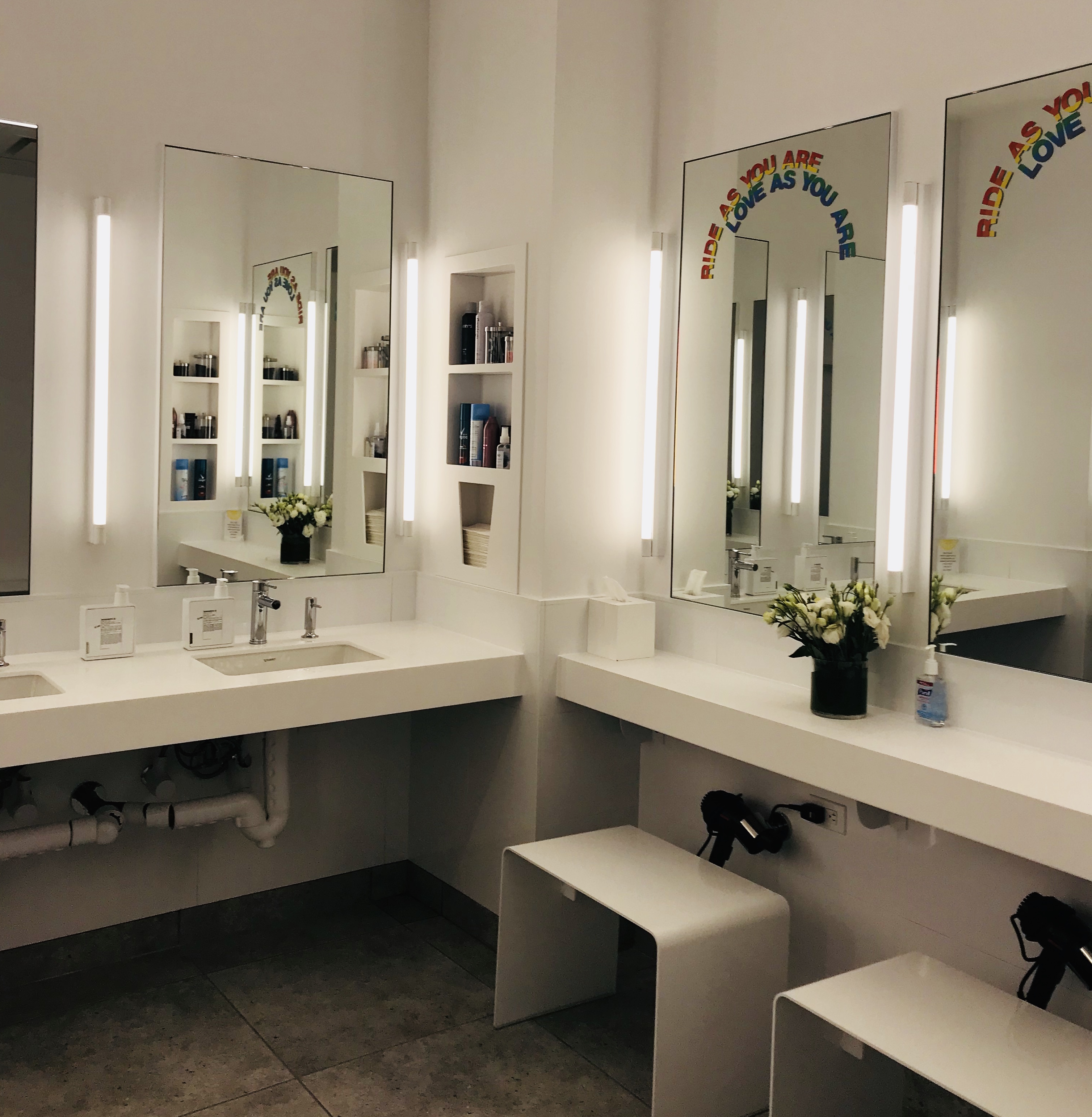 We close out with a namaste-like moment of shared calm and encouragement before vacating in a bit of a stampede.

Did I get a good workout? If my level of sweat (as well as that of the guy who accidentally brushes against me on the way out of class) is any indication, the answer is absolutely.

I amble into the luxe washroom to clean up a bit with some Le Labo hand soap and stop by the grand-opening photo booth to make my own Soul Cycle-branded GIF for potential social media use. And with a quick browse of the retail in the lobby (skulls and crossbones seem to be having a moment), my mission is complete.

As I walk across the street to my car, a Rock The Loop artist is singing “Shallow” as a solo. I float into my front seat and look out into the evening sky through my windshield, where I find a memento of the evening: a parking ticket.

Classes at SoulCycle Clarendon cost $20 for first-time riders and $32 for returning riders.