What Is My Story to Tell?

My husband and I went downtown to protest. I feel the excitement, the movement. But this is not my story to tell. 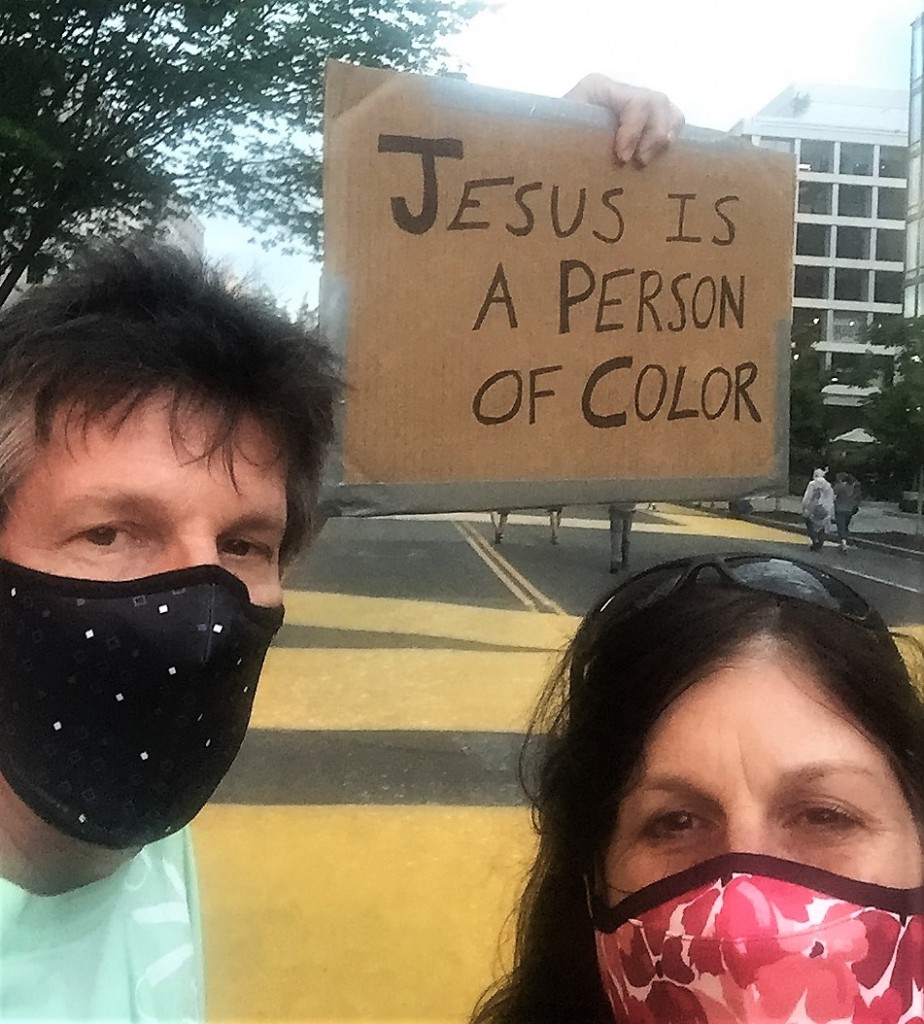 The writer and her husband at a Black Lives Matter protest in D.C.

My husband and I went down to the corner of H and 16th Streets, twice now, in front of historic St. Johns Church. James Madison was the first to worship in this diminutive chapel, back in 1816, when he sat in pew 54. Since then, pew 54 has been reserved for presidents, and every president since has sat there at one time or another—every president except the current one, who chose to stand outside the other week with his trophy bible, for a photo-op, after violently chasing away peaceful protesters outside and religious personnel inside.

We stand with the crowd, holding a sign: Jesus is a person of color. We get thumbs up by fellow protesters. The crowd chants: Hands up / Don’t shoot. Black Lives Matter. Say his name / George Floyd. And we join them. At one point, a man plays an electric guitar and everyone sings, all together, “Lean on Me.” A tear prickles my eye, but this is not my story to tell.

I look at the new sign that Mayor Muriel Bowser has posted, renaming the street facing St. Johns Church “Black Lives Matter Plaza.” A block away, I see the historic Decatur House, where the last remaining quarters of enslaved individuals within sight of the White House have been restored. Both Secretary of State Henry Clay and Secretary of State Martin Van Buren lived in this house, built in 1818. Records are shady whether the two actually owned the people who worked for them, but it’s clear those workers lived here against their free will. What would those enslaved individuals think, if they saw this scene of peaceful protesters, so many years later, still fighting for free will and justice? But that’s not my story to tell.

Ahead rises the White House, where Trump has barricaded himself behind fencing and walls, so no one can get closer than where we stand. I picture him quivering inside the bunker that he refuses to admit he’s hiding in, scared of these peaceful protesters, of us. The wall-crazy president has finally built a wall around himself. Will his base finally see his absurdity? Is that my story to tell?

At home, I chat with my sister on the phone. I’ve avoided asking whom she voted for in 2016, but I think I know. She lives in a prosperous town in northern California, where she has raised three kids in a nice house, with a loving husband and two dogs. “I’ve worked hard to get what I have,” she admits to me in reference to the protests in general, a hint of defensiveness on her tongue. Without her speaking the words I get what she’s saying: She’s worried that if others are given the same rights she has, then everything she’s worked for might be in jeopardy. Something might be taken away from her.

I don’t know if I have the right words, and I hesitate for a moment … but I start talking.

“No one’s trying to take anything away from you,” I tell her. “Everyone deserves the same rights that you have—to be able to work hard and go about their lives without worrying about anything else, just like you. It’s about equal rights.”

It’s a softball version and just a tiny fraction of the overall story, but I think she gets it now, at least a tiny bit. Maybe that’s my story to tell.

Barbara Noe Kennedy is a freelance journalist based in Arlington. Find her at barbaranoekennedy.com