The former White House chef is continuing the winemaking traditions of his parents' homeland. 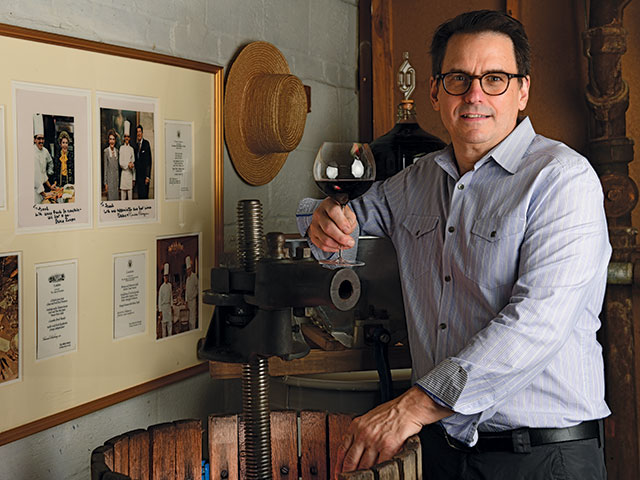 When Frank Ruta and his wife, Anne, were on the hunt for the perfect house in Arlington 30 years ago, he had a very specific request: It needed a subterranean space suitable for making wine—one big enough to accommodate two massive open-top fermenters, a basket press, a 30-gallon barrel and other equipment necessary for the task.

“You don’t want a finished basement for that,” he says. “You want something that’s easy to clean.”

The couple eventually settled in Arlington’s Rock Spring neighborhood in 1989. Ruta and his brother Gino—who lives in Fairfax—have been making 30 to 60 gallons of red wine per year there ever since.

“It’s been part of my life since I was a kid,” says the celebrated chef, who cooked for Carter, Reagan and the elder Bush at 1600 Pennsylvania Avenue before becoming chef-owner of the beloved D.C. restaurant Palena, which closed in 2014. (After that, he did stints at The Grill Room and at Obelisk before landing at Mirabelle on 16th Street NW, where he remained until the summer of 2018.) “My parents are both from Italy, and they kept the traditions from Italy—making sausages, gardening, winemaking.”

The latter process, he says, is fairly straightforward: They hand-pluck the grapes from the stems, crush them and allow the juice to ferment until natural yeasts turn the residual sugar into ethanol and carbon dioxide. “The fermented juice is drawn off, the remaining pulp is pressed, and the ‘wine’ is aged in oak barrels until it’s ready to go,” he explains. The last step takes at least a year. “It’s then bottled and stored for further aging.”

For Ruta, homemade vino has always evoked fond memories. His father, Guerrino, made holiday mangers for each of his four children from grape crates. Describing the miniature structure, with its tiny shingles and a Christmas tree light inside, Ruta’s voice hints that it’s one of his most treasured possessions—as are the 1930s cast-iron and oak basket presses he inherited from his uncle, and another from his father’s barber. His grandfather’s press is still being used by his 92-year-old father, who makes wine in his Pennsylvania home, not far from where Ruta was raised.

When asked about the annual winemaking rituals of his youth, Ruta paints a scene that seems more reminiscent of rural Italy than of a former steel-mill town near Pittsburgh. Yet, winemaking in that area of Pennsylvania was common, he says, thanks to a robust Italian-American community. He remembers the grapes showing up sometimes as late as midnight because the purveyors had such an abundance of deliveries.

“The week leading up to it, we were getting the basement ready to make the wine,” he recalls. “My dad was at work, but my grandfather would get all the equipment ready to go, have conversations with the grocers. We used to make two barrels, 120 gallons a year.”