What’s Next for Torri Huske

The Olympic medalist reflects on the Tokyo games, her year ahead at Stanford and the true value of friendship. 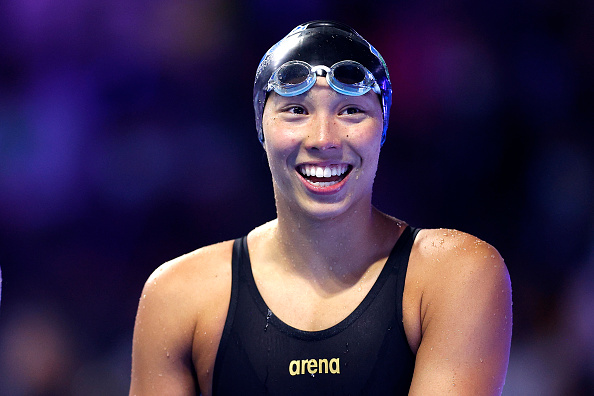 In the blink of an eye—which takes about .14 seconds—Arlington swimmer Torri Huske missed winning a gold medal in the 100-meter butterfly sprint during the 2020 Tokyo Olympics. She placed fourth in that event in a field of phenomenally fast fly-ers.

Still, Huske is a winner multiple times over. The 18-year-old and her USA team brought home a silver medal in the 4 x 100-meter medley relay. During the Olympic trials in Omaha in June, Huske twice broke the American record for the 100-meter butterfly, finally clocking in at just 55.66 seconds.

Huske holds another distinction. In the wake of the U.S. Supreme Court’s ruling that allows college athletes to earn money from their name, image and likeness, the star athlete and Yorktown High School graduate has signed an endorsement deal with swimsuit company TYR.

During a recent, 9 a.m. telephone interview, I talked with a sleepy Huske, who was vacationing with a bestie on the Outer Banks prior to beginning her freshman year at Stanford University.

So, how’s the beach?

I’m really tired. We stayed up late last night watching the second Twilight movie. During the day I play in the water. I love body surfing.

You got within a blink of landing gold in the 100-meter fly in Tokyo.

I was .01 seconds from third place and .14 from gold. It was a little disappointing because I was so close to medaling. And the race was so close. It was such a fast field; any little thing could have made the difference.

Looking back, what would you have changed?

I don’t know if I would have changed anything, but there are some things I still need to work on, like judging my turns, making sure I don’t glide in. It’s something I’ve been working on but just haven’t perfected.

Anything else you want to improve?

I still need to make my second length faster. Going into college, I’m excited because we’re going to do more work in the weight room, so that will help.

Why did you choose Stanford?

Stanford was the number one school that I wanted to go to, though I was keeping an open mind. When I went for my visit, I liked the atmosphere and the team. They were doing a circuit in the weight room and one person messed up; the whole team had to restart. You could tell, watching them, that this was really difficult, but everyone maintained a positive mindset, and they were also supportive of each other. I thought, This is where I want to be.

What will you study?

I’m undecided, though something STEM-related. Stanford wants you to explore different majors and classes.

Before your mother, Ying, emigrated to the U.S., she grew up in Mao Zedong’s China during the Cultural Revolution. Her family was relocated from Guangzhou to the countryside, where she had to haul water from the river to her home. What was that like for her?

It sounds traumatic to us, but it wasn’t traumatic to her because it was all she ever knew. She still had fun and played with her friends. It was just very different from what we are accustomed to. My mother’s experiences made her a really hard-working person, and that’s where I get my work ethic from. She just wants me to be happy.

Did you ever think you’d make it to the Olympics?

It was never a dream for me because I never thought I would be good enough. I didn’t realize it would be possible until the 2019 nationals when I won the 100 fly. That’s when it dawned on me that, if I keep working hard, I may have a shot. My goal is wanting to be the best version of myself. Just wanting to be better drives me.

You have a healthy social life, which can be challenging for an elite athlete.

My friends are very supportive. I wouldn’t have [gotten] as far without them. They make me happy, and a happy swimmer is a fast swimmer. I owe a lot to them.

If you had to pick between swimming and your friends, which would you choose?

My friends. Between training and school, it’s hard to hang out with them sometimes. But it makes me appreciate my time with them more. I love swimming, but it’s not forever. My friends are long-term.

Lisa Kaplan Gordon is a freelance writer living in Mclean.