Where to Get That Tiki Bar Feeling

Pretend you’re on vacation at these two hot spots: one in Arlington and one in Falls Church.

Is everyone on vacation except you? Sure seems like it to me. But if you want to feel like you’re on vacation, whiling away an afternoon under an umbrella with a cold beer and good food, here are two great destinations in our own back yard.

Sibarita Restaurant, with its tiki bar overlooking Washington Boulevard in Arlington, is a meat-lover’s dream. Clare & Don’s Beach Shack in Falls Church, with its surfer-dude vibe and reggae soundtrack, includes plenty of options for vegetarians and vegans. Let’s compare:

Sibarita: Imagine walking through a small Bolivian town and popping into a sleepy little bar and restaurant because the tiki umbrellas look enticing (and oddly out of place). The proprietor is behind the bar, polishing glasses and wrapping silverware in napkins. She greets you with a warm smile and quickly pulls up some patio chairs to the table underneath the umbrella that drew you in. 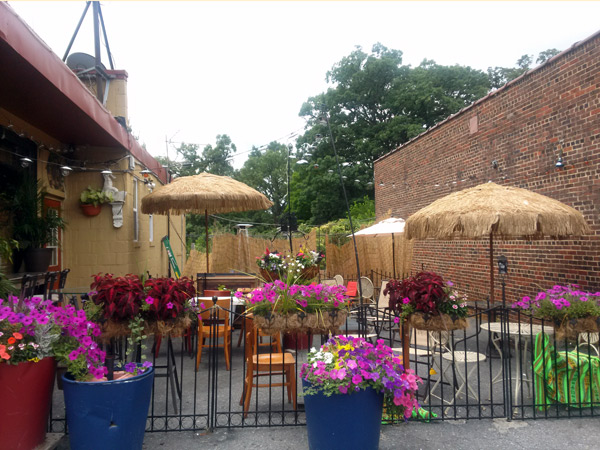 Clare & Don’s: Aptly named, it’s a bustling beach shack that channels Fort Lauderdale (or Daytona, or Miami…) with the big Florida flag hanging outside. Hosts dressed to look like lifeguards take you to your table as you bob your head to the music, which alternates between reggae and the Beach Boys. It’s a loud, happy, busy place. 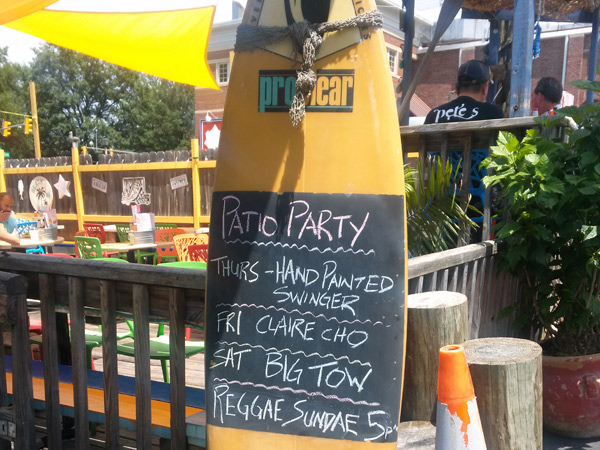 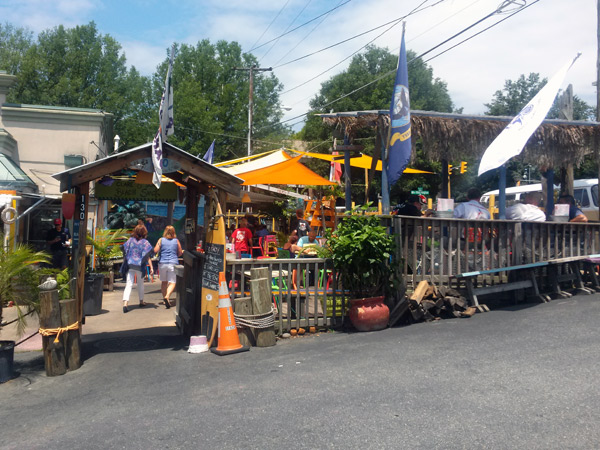 Sibarita: Take your pick—from the lion statue on the roof and the wacky lettering on the sign, to the fiberglass cow just inside the door, whose side is carved out to make a couch. 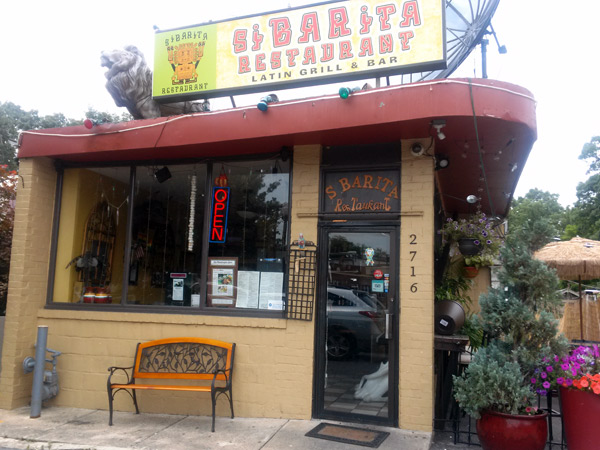 Clare & Don’s: This place was built on kitsch. There’s precious little wall space that isn’t taken up by something—notably, Florida license plates and dozens of signed rubber flip-flops that march down the walls of the covered patio. 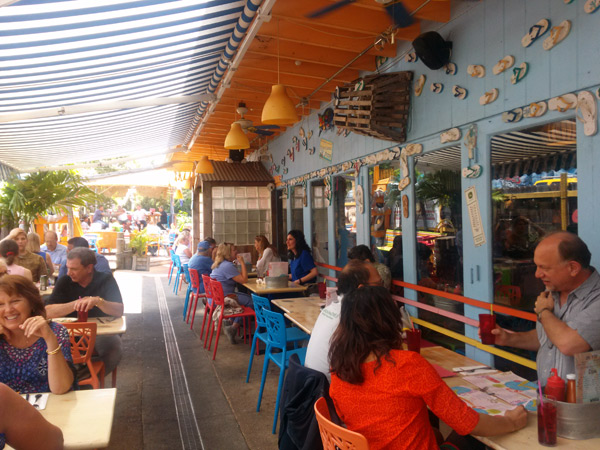 Sibarita: They have a soup special every day. Even though it was hot outside, we ordered the peanut soup and were happy with the choice. The peanutty, potato-based broth is served with cilantro and fried matchstick potatoes on top. Bonus: A big, tender chunk of beef is waiting for your spoon at the bottom. 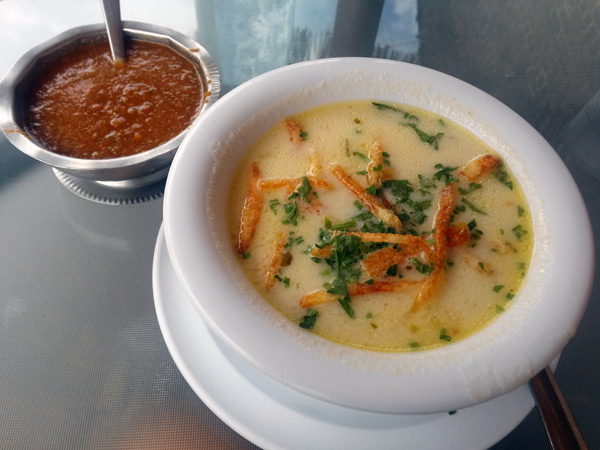 Clare & Don’s: You can’t go wrong with classic guac and chips. The latter appeared to be twice-fried and packed with crispy, salty goodness. The chunky guacamole and mild salsa sent them down in the most delicious way. 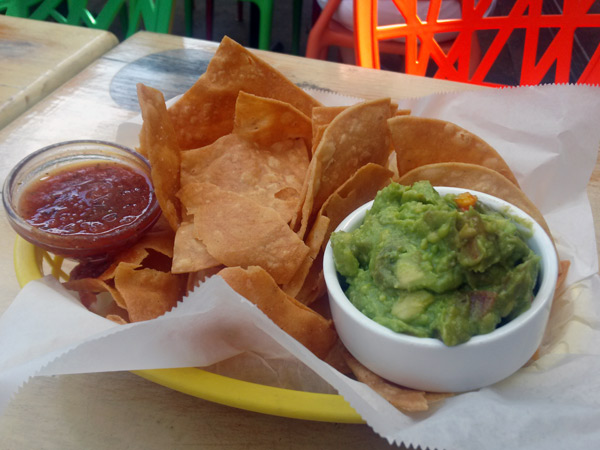 Chips and guacamole at Clare & Don's

Sibarita: When in Bolivia, order meat. Period. Don’t even bother with anything else. (We didn’t.) I took our server’s advice and ordered the most popular sandwich—the Diportado, made with steak, sautéed onions, tomatoes and jalapenos, all topped with a fried egg.

My 10-year-old, meanwhile, ordered the Silpancho—thin, breaded steak on top of rice, served with two fried eggs and pico de gallo. The meat part of this dish is almost like a steak cracker that forms a crispy topping for the rice and sauce. And there was so much leftover that we were able to bring more than half of it home for his brother. 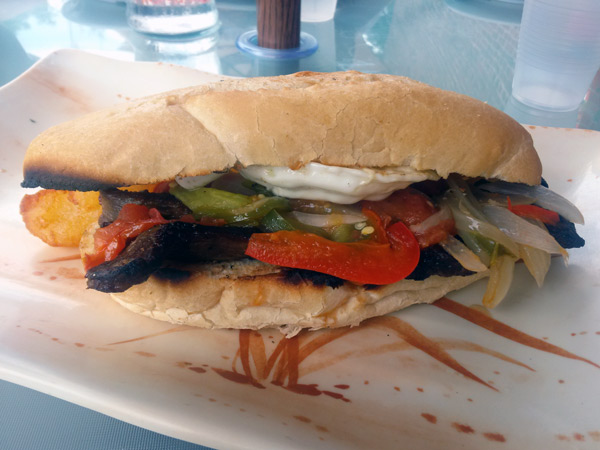 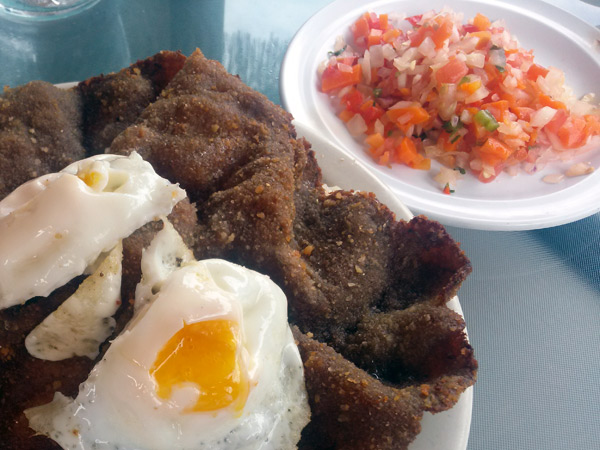 Clare & Don’s: Arlington Magazine has previously written about all its veg offerings, so I had to give them a try (especially coming off my carnivorous lunch the previous day). I ordered the Uncrabcake Sandwich, a tofu patty mixed with onion, celery and Old Bay, and topped it with my side salad, which was mixed with key-lime vinaigrette. It was delicious, although the tofu texture—as the name of the dish suggests—was decidedly un-crab-like.

My young companion went with the classic Cheeseburger in Paradise, which came oozing with melted cheddar and served with a side of addictive crinkle fries. Admittedly, I didn’t stay completely virtuous with my tofu when I smelled that deep-charred aroma. I stole a couple bites. 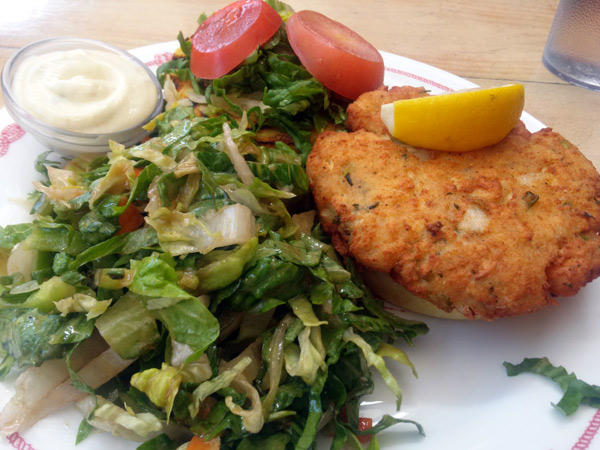 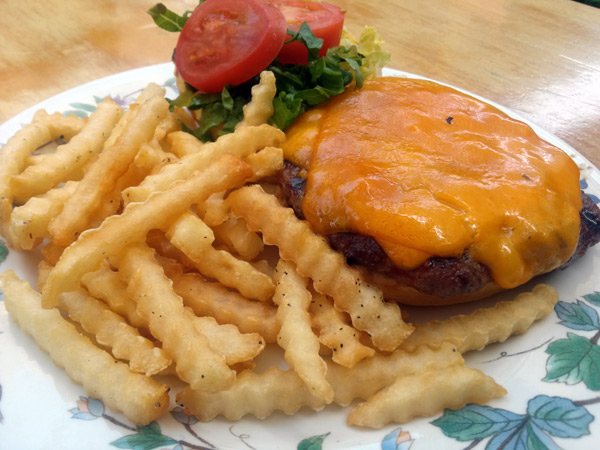 Cheeseburger in Paradise at Clare & Don's

Sibarita: Are you kidding? After all that meat and egg, we had no room left. A sweet side note, though, was the horchata that came to the table at the beginning of the meal—a cinnamon-vanilla-rice “juice” on ice that’s sort of like a non-alcoholic Bailey’s Irish Cream with notes of tapioca. It’s a nice palate cleanser during a heavy meal.

Clare & Don’s: When in Florida, as they say. The kid ordered the Fried Oreo Sundae, “A Florida State Fair favorite,” according to the menu. Let’s just say it didn’t disappoint. The puffy, crispy outside gave way to a hot, soft Oreo inside, cooled with mint ice cream and whipped cream on top. And of course, it wouldn’t be complete without chocolate sauce.