The street art gallery, restaurant and bar is open late.

Whino, a new Ballston Quarter nightspot, is pairing underground art shows with craft beer tastings in a neighborhood that is just emerging from a year and a half of pandemic-induced hibernation.

“People are excited to get out of their pajamas,” says owner and art curator Shane Pomajambo.

The restaurant-gallery hybrid opened June 18 on the second floor of the revitalized mall, already home to more than two dozen eateries. After a series of local gallery closures in recent years (Artisphere, Metro Micro Gallery, Gallery Clarendon), investing in a new one poses some risk. But Pomajambo is optimistic. 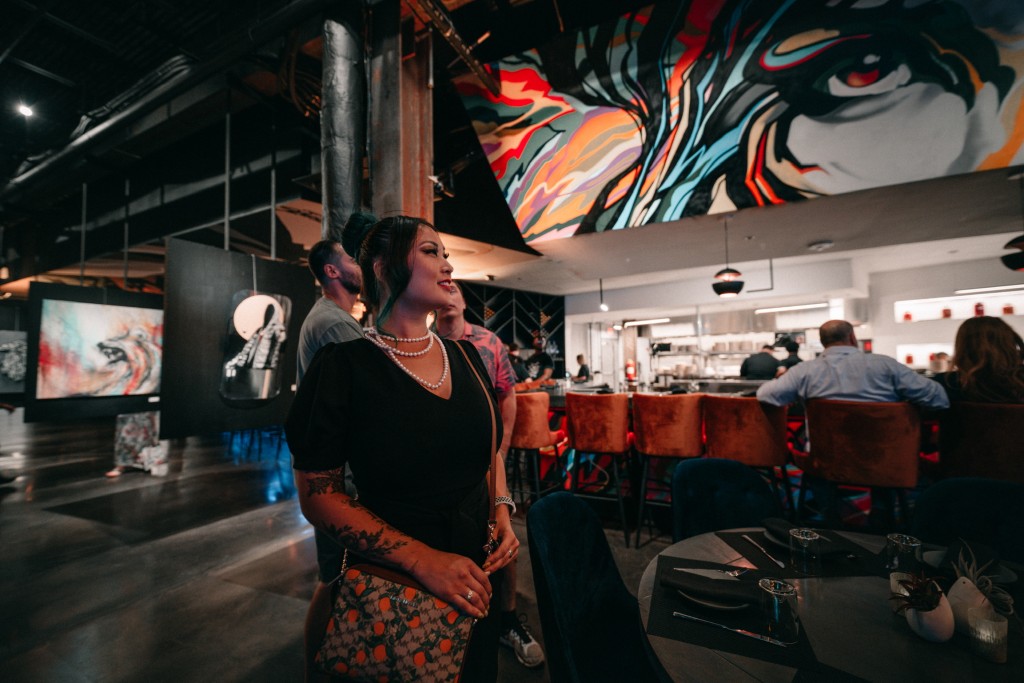 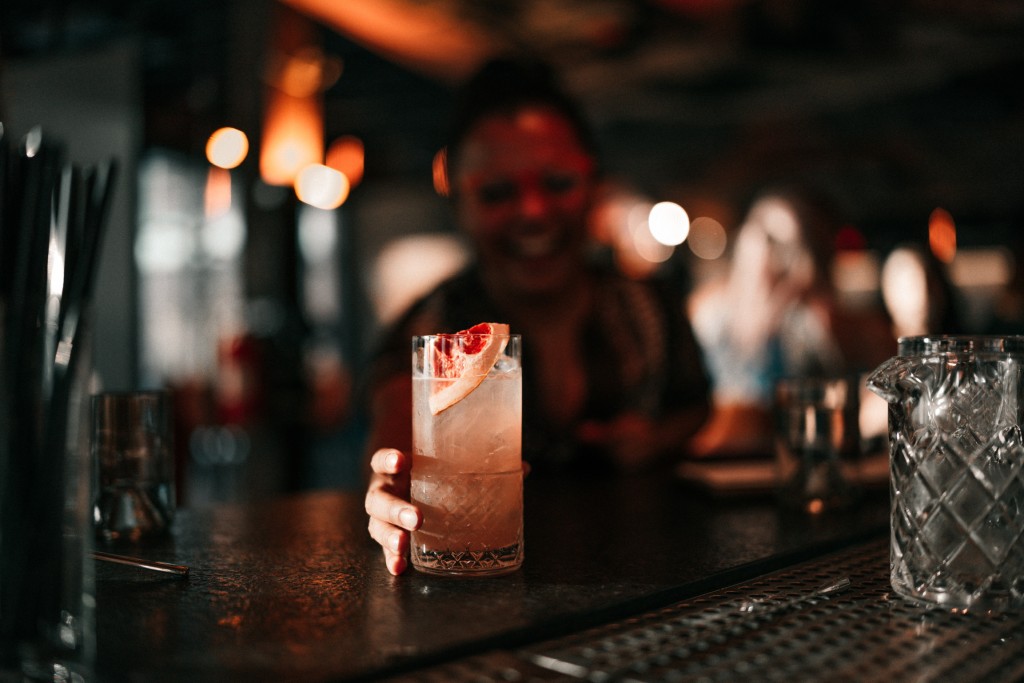 Pomajambo, originally from Queens, is knee-deep in the local arts scene, with a focus on “lowbrow” or “pop surrealist” art, a contemporary genre that emphasizes the subversive. In 2007, he opened his first gallery, Art Whino, in Old Town Alexandria before relocating it to National Harbor. A second gallery, Blind Whino, opened in D.C. six years later. Pomajambo also founded the annual G40 Art Summit, first held in Crystal City, and the Richmond Mural Project. The idea for Whino came to him, he says, as he hit his 10th anniversary as a gallery owner and considered how he’d like to approach the next decade.

“I went ahead and closed everything. And now it’s all living under one roof,” he says. 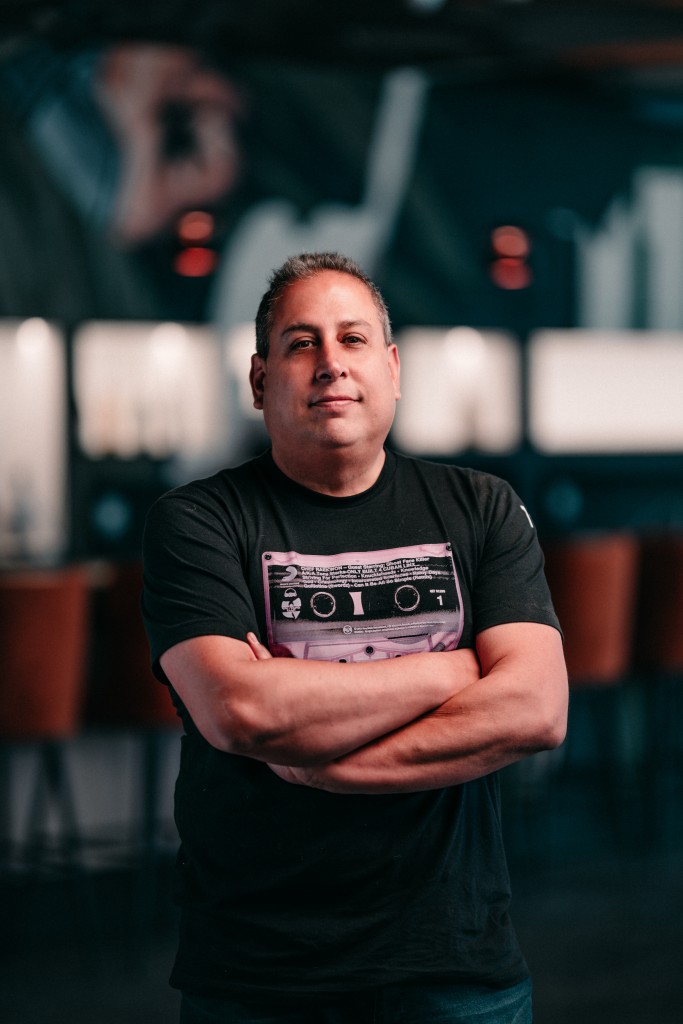 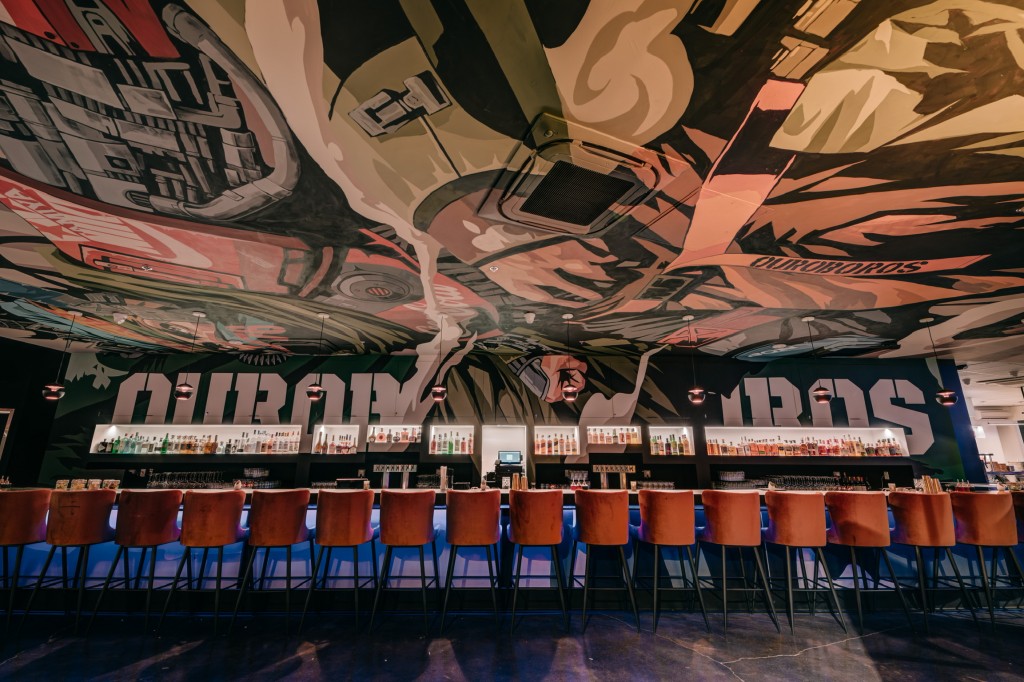 The main bar, featuring a mural by Dragon76. Photo by Timothy Yantz

The 6,200-square-foot night club took 2 1/2 years to build and open, stymied by construction delays and the pandemic. Inside, artwork weaves through the space. A small gallery of Plexiglas boxes house collectible figurines—star-eyed skulls, loveable robots and reimagined superheroes—that can go for hundreds of dollars a pop. 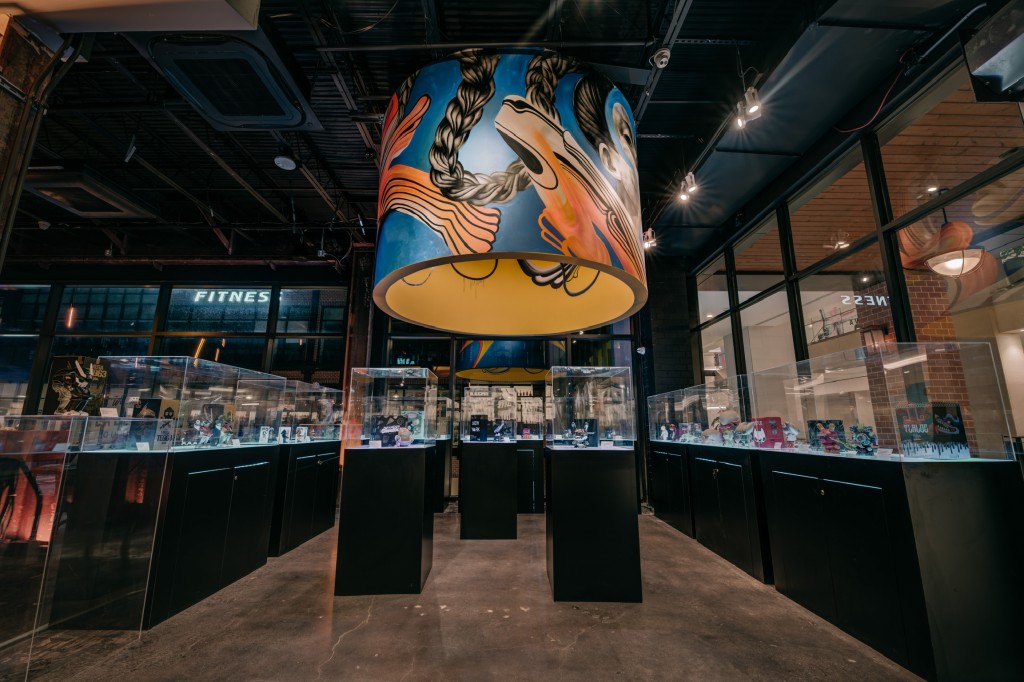 Figurines on display near the entrance. Photo by Timothy Yantz

In the center of the room hangs a floating gallery of 2D works. Above each of the three bars are vibrant murals painted by artists from New York (Dragon76 —who also provided the image on staff uniform T-shirts), L.A. (Aaron “Woes” Martin) and Northern Virginia (Rodrigo Pradel), with a fourth mural from Hong Kong-based artist Caratoes near the entrance.

The murals will be frequently repainted, Pomajambo says, to demonstrate that the gallery “is a living thing.” 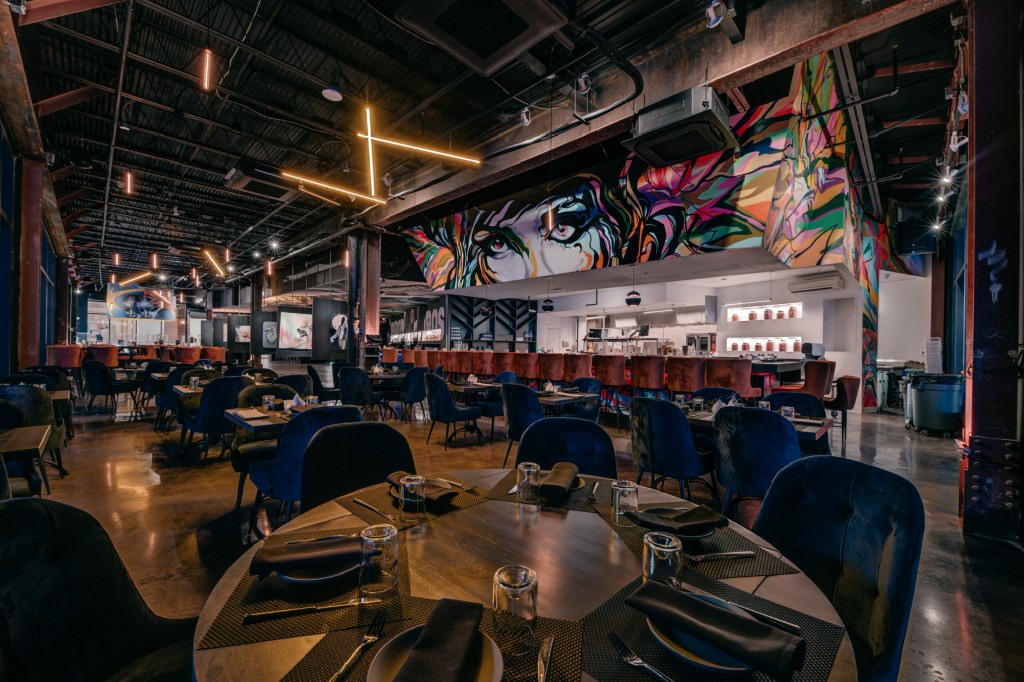 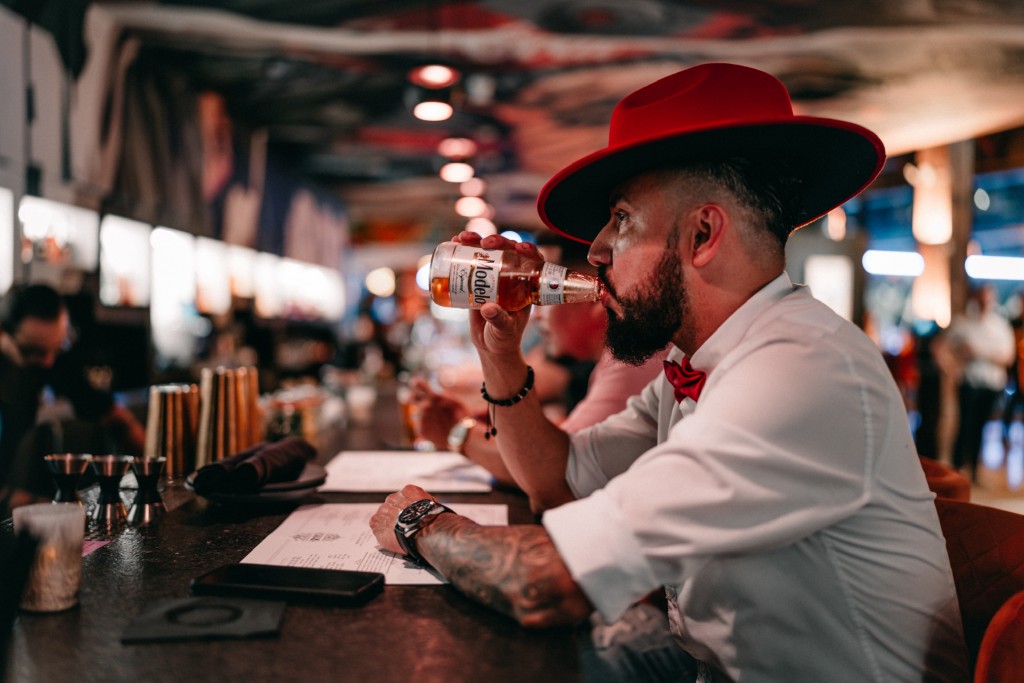 Patrons can order food and drink from any of Whino’s three bars, one of which overlooks the kitchen. The menu includes charcuterie and shareable plates such as za’atar spiced lamb ribs and porchetta sliders. When Pomajambo discussed the menu with executive chef Eleftherios Natas (most recently regional chef for El Centro D.F.), the owner mentioned that some of his clientele might have a tight budget.

“[Natas] said to me, ‘Don’t tell me tater tots, ’cause everybody’s doing tater tots,’” Pomajambo recalls. When the Whino owner noted that the beloved spuds would fit in fairly well with the casual, street-art vibe of the place, Natas presented his own take: polenta tots with Oaxaca cheese and chorizo, currently the kitchen’s No. 1 seller. 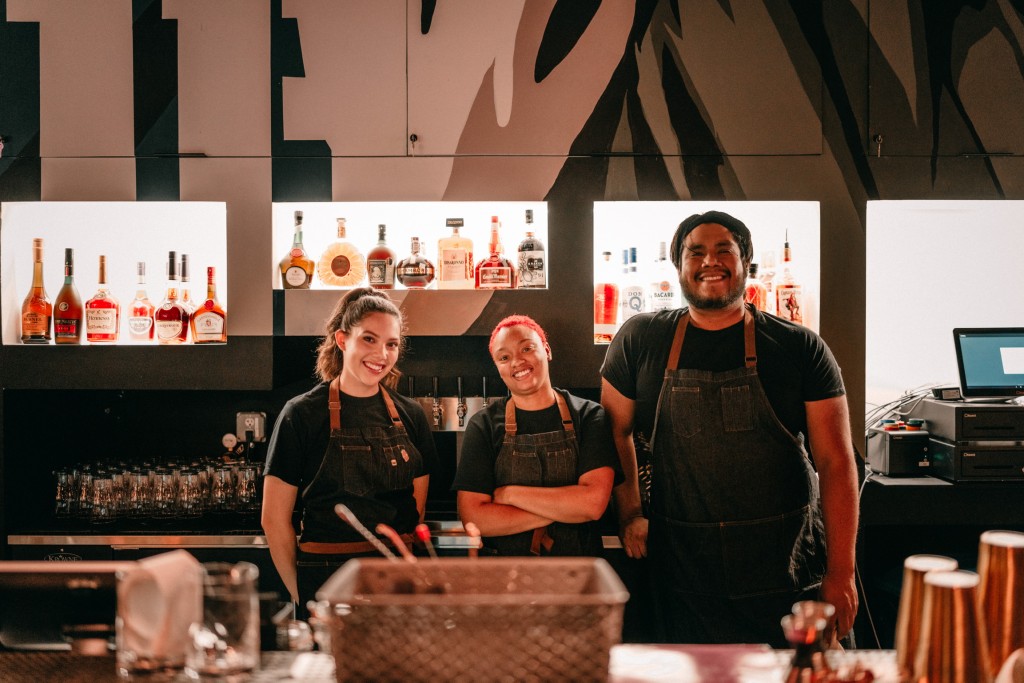 Pomajambo says he’s tried to keep things local when it comes to the menu, which includes a draft list with several local breweries (Port City, Solace, DC Brau). In a nod to what he calls the “tongue-and-cheek” nature of lowbrow art, many of the cocktails have cheeky names. (The Ancient Assassin packs a punch with Elijah Craig rye, madeira and Gran Classico.) 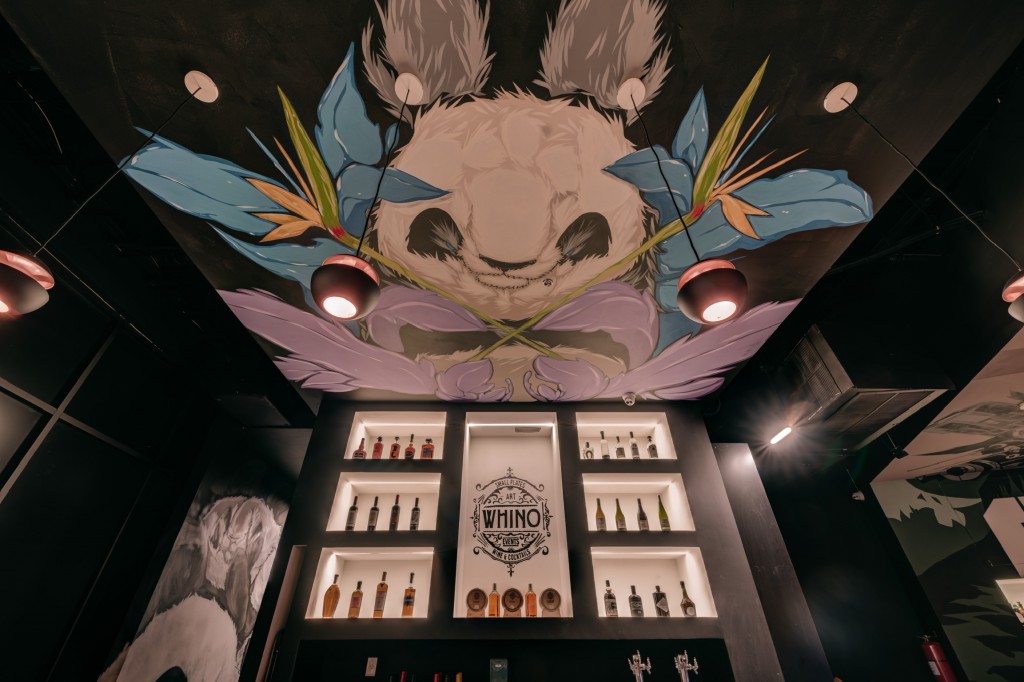 The space will regularly present both dining (one of its bars is built for tastings) and art events; an Evolution Craft Brewing Co. tasting event is on tap July 6 and a solo show from muralist Woes opens July 15. Whino also hosts after-hours events with DJs, food specials and drink tastings. 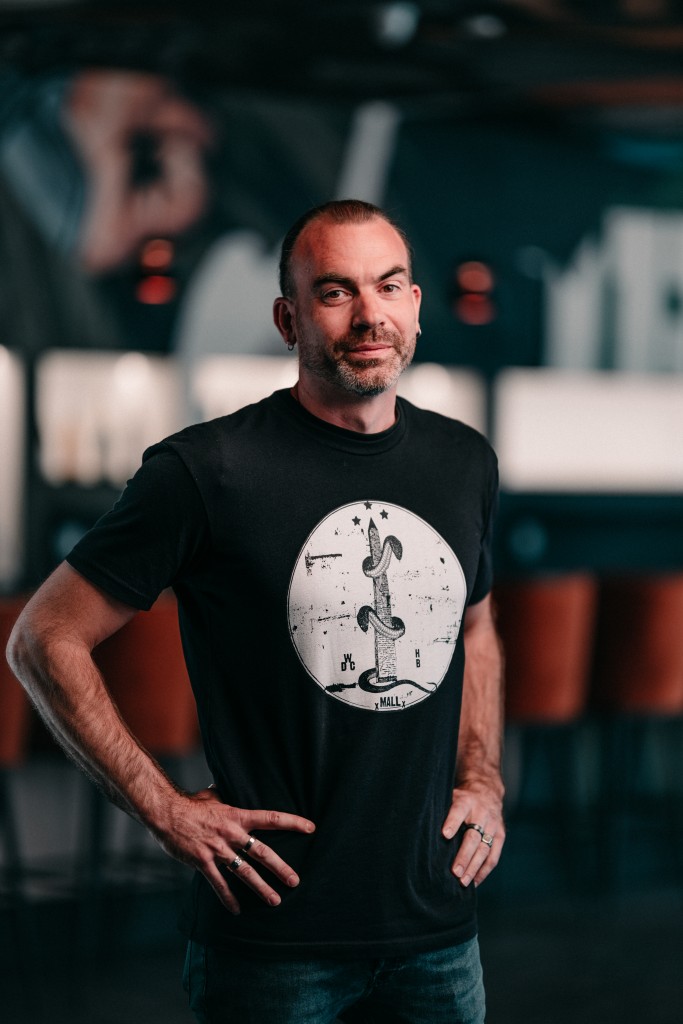 “[It includes what] you experience with your eyes, to that which you experience when you dine out or when you enjoy a cocktail or a nice glass of wine,” he said during a recent visit to the space.

The restaurant-industry veteran says he and Pomajambo eschewed QR codes and flat screens in favor of actual conversation.

“We wanted people to get back to being social and sharing and talking and having something to talk about,” Young says. “Just sort of getting back to the fundamentals of being human again.”