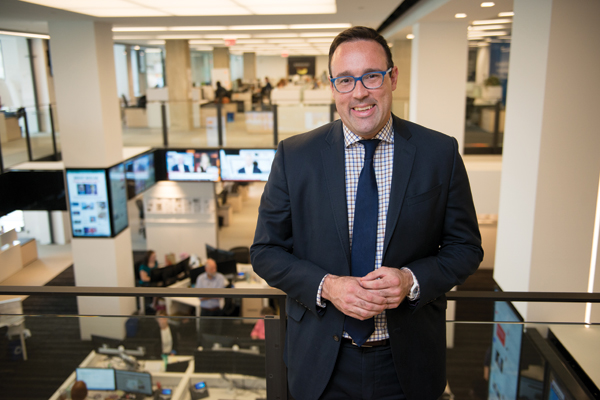 Cillizza at The Washington Post. Photo by Liz Lynch

Lives In: Falls Church, near Haycock Elementary, with his wife, Gia, and sons Charlie, 7, and Will, 4.

Résumé: Founder of Washington Post political blog “The Fix” and MSNBC political contributor. Also a regular on The Tony Kornheiser Show (now a podcast) and author of The Gospel According to the Fix: An Insider’s Guide to a Less Than Holy World of Politics

Early Aspirations: I wanted to be an NBA player and I came up a little short. Literally. I’m 6-foot-2 and not nearly talented enough. Then I wanted to be a novelist, but I realized that being a novelist is not an easy profession to jump into unless you’re one of those writers who is well-acclaimed at 19.

Where There’s a Will: When  you’re a political reporter, people spend lots of time trying to exhume your true political beliefs. I worked for [conservative columnist] George Will in college. He hired two Georgetown undergraduates every year to answer phones and do research. I didn’t know a ton about him, but I knew he liked baseball and I liked baseball. He paid $12 an hour and in ’95 that was living the dream.

American Pastimes: I started to write a bit when I was working as a receptionist for Charlie Cook [of The Cook Political Report] at National Journal. I realized the things I liked about sports—the history, the personalities, the statistics—were all in politics. There’s always the start of an election cycle, the middle and the end. It’s like a baseball game. Baseball has around nine innings and one team wins and one team loses. But it’s the way that it plays out that’s the interesting part.

Early Adopter: In 2005, a blog was kind of a revolutionary idea. “The Fix” was originally conceived to be a group blog that I would curate, but not a lot of people wanted to contribute, so I started to write it. We didn’t really have metrics, but I feel confident the audience was very small in the beginning. And then it just kept growing. In April [2016], we had more than 18 million unique visitors and more than 80 million page views.

The New News: More and more people, especially young people, want their news and analysis at the same time. There was this shift in people wanting not just the “what” of the story, but the “so what?” and the “now what?” We give perspective, context and reported analysis without bias. That was a big thing because for a long time, big news organizations wrongly conflated voice with bias.
Mind Over Chatter: Comments sections, the way they’re currently set up, are like voting the loudest person as mayor of the town. He’s not actually a representative, he’s just the loudest person. The only way I think you can change [that dynamic] is not logistically feasible for any Internet company. You’d have to have a battalion of people moderating.

Avoiding the Weeds: I generally don’t read comments on the blog unless I’m interested to hear what people think on a particular issue. As with most things in politics, unfortunately, you could write “The sky is blue today,” and the comments would be “Why do you like Donald Trump so much?”

Losing Battle: I get hundreds of emails a day and can’t keep up. I missed an email about Tim Russert’s funeral because I get too much email. In 2015, someone at The Atlantic was writing a piece about dealing with your inbox and asked me how many unopened messages I had. It was tens of thousands. My only option is to never go through them, or to do a mass delete—the nuclear option—in which I send a note to everyone saying “I’m deleting everything.” Maybe I’ll do that this year.

Truth in Media: If someone is convinced that the media is fundamentally corrupt and morally bankrupt, I don’t think we can do anything about that. There are some people you can’t reach. What I try to do is be as transparent as possible. I will tell any reasoned critic of me to come into the office and observe me for the whole day. It will be boring. It will be me sitting with headphones and writing emails. It would cure people of the sense that we’re having secret meetings and plotting.

Staying Relevant: I had a very nontraditional career path. I didn’t major in journalism. Trying to figure out the next thing is nerve-racking because I happened into this field. Trying new things still makes me nervous. We’re going to start a political podcast and I’m a little nervous about that. I could just keep doing what I’m doing but I want to keep moving forward. n
Associate editor Emily Van Zandt has zero unread messages in her inbox. She’s still learning not to read the comments.

Associate editor Emily Van Zandt has zero unread messages in her inbox. She’s still learning not to read the comments