Why I Stopped Going to Therapy and Started Gambling

There are life lessons to be learned at the poker table. 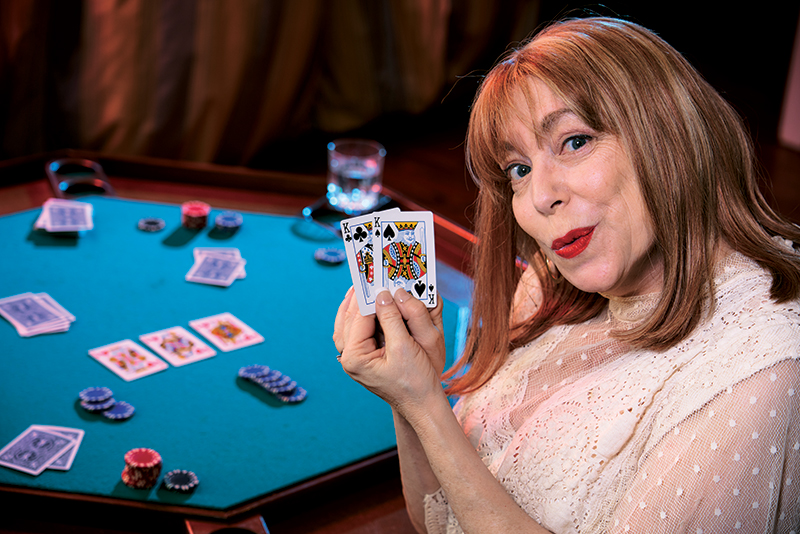 It’s 9:15 on a  Saturday morning and I’m squeezed around a Texas Hold ’em table with nine other early risers, hoping to hit the $500 “lucky table” raffle at the MGM National Harbor casino. A ceiling monitor scrolls through the numbers—go table 30!—slowing down as our collective pulses speed up.

When 30 hits, our entire table jumps up, whoops and fist-bumps. Most of the time we’re competitors, trying to win dollar chips from each other’s stacks. But for the moment we’re comrades, celebrating our $500-each jackpot, even though it’s unlikely that anyone’s winnings will make it out of the casino.

For years, I spent hundreds of dollars each week on therapy—psychoanalysis, cognitive and behavioral therapy, even hypnosis for a short time. I made a lot of progress during those years. I no longer suffer anxiety attacks (although marrying a good man was probably the cure for that), and I was able to tell my 90-year-old father that it wasn’t my job to make his new child bride feel good about herself.

In August, however, I terminated my latest round of tell-me-more-about-thats and started Texas Hold ’em therapy.

Now, on Saturdays, while my husband sleeps in, I take my shrink money and play poker. Although I don’t totally understand why a withering look from my mother still makes my knees buckle, I’ve learned a lot about myself at the casino.

In Texas Hold ’em, each player combines two secret cards they’re dealt with five open community cards to make the highest hand. A round of betting follows after each open card is turned up—bet, call, raise or fold—until the remaining players reveal their hands.

Most of the 46 tables in MGM’s poker room are “no-limit” games, meaning players may bet and raise indefinitely, often pushing entire stacks of chips into the middle on a measly pair of twos, hoping to bluff their way to victory. No-limit players are crazy.

I play 4-to-8-limit poker. In this scenario, bets are limited to multiples of four at first, then eight for the last two rounds. Pots rarely top $150, and bluffing is rare, though not unheard-of. You don’t win or lose big. I’ve been known to churn my $165 stack for five hours, earning a little, giving a little, sometimes going home with nothing, other times plus $75.

But I don’t play poker to make money. I play for fun and company.

My life is long on contentment, short on thrill. That’s why I seek the rush of turning up my two “pocket cards” each hand, hoping for a couple of kings or, at least, something that reasonably keeps me in the game. I love seeing the community cards, divining what other players are holding and counting my fingers under the table to confirm I have the ace-high straight.

My 22-year-old son moved out a couple of months ago, making our McLean house feel like a tomb until my husband returns home each night at 9. By comparison, there’s always noise and action at the casino.

When I walk into the poker room, a security guard inspects my handbag and says, “Good luck, gorgeous.” The receptionist knows my name and game: “Hi, Lisa. You’re at table 30.” A cashier I’ve come to know takes my cash and does a little magical wave over my chips to give the stack some good juju.

Most of all, I love the guys—and they’re mostly men—I play poker with. Our 4-to-8 crowd is a collection of low-stakes regulars. There’s Sal, Mr. Congenial, who greets everyone by name and reads a book between hands. There’s Robby, a lanky, 60-year-old who tries to intimidate other players by glaring at bluffers and slapping his cards on the table. And there’s Mike, who wears black, fingerless gloves and routinely draws full houses.

Then, there’s me, often the lone woman and newbie at the table (though not as new as I pretend to be). I’m an obvious threat to no one. If I raise too early, the guys school me about positioning better with “What the hell are you doing?” If I win a big pot, they pat the table, poker’s universal sign for “good hand.”

I work on my head while playing poker. Since scared money never wins (that’s a poker saying), I try to play fearlessly. It’s become my challenge in cards and in life. Whenever I debate going “all in,” I remember my second analyst’s favorite question: “What is the risk?” Then I bet my last chips and hope for the best.

Weekly trips to the casino boost my self-esteem. As a middle-age, suburban woman, I’m invisible most of the time.  And yet someone always notices me in the poker room. I get smiles and winks from older and younger men; last week, a Maryland accountant offered to stake my next buy-in if I’d have coffee with him.

I knew the risk in making that bet and replied, “My husband wouldn’t like that.” But I savor that poker-specific pickup line, the ego equivalent of a royal flush.

Lisa Kaplan Gordon is a freelance writer and poker player who lives in McLean.