A local wine-seller’s home remodel becomes the toast of the town.

When planning a dinner party, most hosts decide on a menu and then choose wines to go with it. But in Doug Rosen’s world, the wine always comes first.

On this particular Friday evening, it’s a trio of California cabernets, which his wife, Marla, has capably paired with rosemary potatoes, carrots and a standing rib roast encrusted in porcini mushrooms, bacon and garlic. It’s a savory spread for their eight dinner guests, one of whom arrives with the perfect complement: a basket of homemade, piping-hot Gruyère popovers.

“California cabs are not as food-friendly as people think they are,” Doug says. “Really, the best platform for this wine is a well-prepared steak or beef dish with simple but deep flavors. The smoky, salty, thick crust on this meat would have obliterated a more subtle wine, such as a French Bordeaux, but the California cabs cut through the richness. They are full-throttle wines.”

As the faces around the table take on various expressions of merriment and gastronomic ecstasy, Doug is already contemplating the theme for his next soirée. It will highlight wines from the Cotes du Jura region of eastern France, he says, some dating back to 1928. Menu to be determined.

Vintages and varietals are a daily topic of conversation in the Rosen household. In fact, wine was a major consideration when the couple remodeled their 1950 brick rambler in Stratford Hills in 2008. Doug is the proprietor of Arrowine and Cheese—a veritable hive for oenophiles—in the Lee Heights Shops at the intersection of Lee Highway and Lorcom Lane, and his life revolves around the stuff. Store events notwithstanding, he and Marla host dinners and wine tastings at their home several times a month, welcoming friends, wine-shop customers and growers from around the world.

The impetus for their renovation was pretty straightforward: After 15 years in the house, the original floor plan, with its compartmentalized rooms and outdated kitchen, simply wasn’t conducive to their casual yet sophisticated style of entertaining. They wanted an elegant gathering space with more elbow room—but one that still made guests feel at home.

“When you are traveling for work, eating in restaurants and staying in hotels, it sounds glamorous, but it’s not,” explains Marla, who works at George Washington University’s School of Public Health. “You really just want a home-cooked meal. Arrowine tends to seek out [and buy from] small growers and small-production operations. These aren’t people who have big companies with big entertainment budgets. They are farmers who have had vineyards in their families for generations. They’re very down-to-earth.”

The dinner parties, she says, embrace that sensibility. “It’s really about being in someone’s home and sharing a passion for the process, the soil, the terroire, the flavors.” 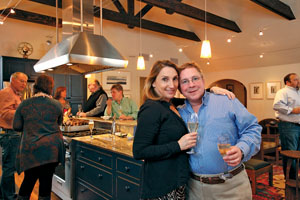 They could have torn down their old house and built new (a path that more than a few of their neighbors on North Edison Street have taken), but instead, they hired Falls Church-based builder/remodeler Yuri Sagatov to design and execute a more surgical transformation. In that regard, the design approach was perhaps more like a Bordeaux—subtle and complex—than an in-your-face cabernet.

Drive by the house today, and you might miss it. From the outside, the modest, ranch-style residence still looks much like it did pre-renovation, save a minor facelift to the front porch. Its height and footprint are the same.

The inside, however, is a different story. To create a larger communal area, Sagatov removed several nonstructural walls on the main level and appropriated a sizable portion of the attic, pushing the ceilings up to 14 feet. As a result, what was once a cramped assemblage of small rooms is now a large, open party space with a professional-grade kitchen, living room, dining area and deluxe wine pantry that all flow together.

“Old ramblers have a tendency to feel closed-in and drab,” Sagatov says, noting the rationale for removing nonperimeter walls. “By reclaiming part of the attic, we were able to create volume without really changing the square footage at all. When you open things up, you can use smaller spaces more efficiently by allowing them to play off each other.” Their interconnectedness, he explains, makes the spaces feel bigger than they actually are.

What many remodeling clients spend adding square footage, the Rosens instead allocated toward thoughtful finishes and details. Niches and alcoves showcase their favorite pieces of art. What was once a conventional fireplace surrounded by painted millwork is now a rustic sandstone hearth that extends to the ceiling. It’s bisected by a rough-hewn mantel made from a piece of reclaimed wood.

And then there’s the vaulted ceiling with its exposed roof trusses and skylights, which feels simultaneously dramatic and homey. “When we decided to knock down all the walls, I wanted to make sure the space still felt inviting and not cavernous,” Marla says. “I love modern design, but that’s not the type of environment I wanted to live in. The beams added warmth and texture. Then below that you have the [strings of cable rail] lights.” This layering of design elements produces an effect that still feels human-scaled.

The kitchen area has its own covetable features (including granite extending from countertops to backsplash, plus custom-painted French provincial-style cabinets—a suggestion from interior designer Ed Bouchard, a family friend who also designed the Alexandria home of James Carville and Mary Matalin). But the professional-grade setup isn’t just for show. It’s all about business. Designed to accommodate two busy cooks working in concert, it has two sinks, two dishwashers, an eight-burner Wolf range and a massive vent hood.

The 12½-foot-long island, which separates the cooking galley from the living room, is outfitted with barstools and a raised bar that’s shaped like a fin. A perfect platform for wine tasting, it also makes a nice perch for guests who want to sit and watch the action on the stove. Take a few steps back and that same raised countertop hides dirty dishes and clutter from view.

Though the Rosens entertain more often than most, no two get-togethers are the same. Some evenings begin with champagne and sushi from Tachibana in McLean, after which the couple show off their culinary skills by tag-teaming to prepare a main course in the open kitchen. Other times, they bring in professionals, such as Will Doscher with New Course Catering in D.C., or Silvia Henderson, the chef for Harvard University’s Center for Hellenic Studies (also in D.C.), to design, cook and plate a catered menu around specific featured wines.

“I pick the wine and then we design the menu around it,” Doug explains. “[Silvia] does her homework and comes back with menu suggestions. Then we cook each dish and uncork wines to try the pairings and make sure they work.” The planning process, he says, is part of the fun.

The main storage area for the wines is arguably the masterstroke in Sagatov’s remodel. Tucked into the wall at the far end of the dining room table is a temperature-controlled wine cellar encased in hermetically sealed, wall-to-wall glass. Its custom-built, double-depth racking system—which holds 1,400 bottles—is artfully framed with a decorative border made from vintage wine boxes. The flooring? Cork, of course.

Most of the wines in this mother of all wine racks are consumed within four to five months, Doug estimates as he pops open a bottle of 1845 Madeira. (Pulling up Google, he notes that it was corked the same year that Johnny Appleseed died, Edgar Allan Poe published The Raven, James Polk succeeded John Tyler as president and Florida became the 27th state in the Union.)

“Madeira is my passion,” he says. “It was the drink of choice when the Founding Fathers toasted the signing of the Declaration of Independence. I collect things that are esoteric. The oldest wine I own is at the house, not at the shop.” 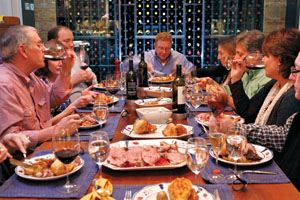 The design of the wine cellar takes this pedigree into account.

“The cellar features its own dedicated cooling system that maintains the exact temperature and humidity that fine wines require,” Sagatov explains. “No-heat LED lighting provides ample illumination without compromising the integrity of the spirits on display. We were very aware that in designing a wine room for a professional wine-seller, we had to get every detail exactly right.”

Next to the dining room—a small spot occupied by a rustic farm table and a mismatched assortment of antique chairs and benches—double doors lead to a large outdoor patio that further extends the party space. Neatly landscaped with azaleas and holly, the backyard includes a grilling area, a table and chairs for al fresco dining, two standing heat lamps, and a Caldera spa with built-in music and individualized seat controls, which Rosen describes as the “Rolls-Royce of hot tubs.” In warm weather, the indoor-outdoor space can accommodate up to 80 guests.

Alternatively, the house and backyard are just as comfortable for an intimate gathering of four or six—or a family night at home. “The fact that it’s open and light allows for togetherness,” Marla says. “I know it sounds trite, but it’s true. The kids can be in the living room doing their homework while we’re cooking. Or, if we have people over, I can clean up the dinner dishes while guests are sitting at the table and still be part of the conversation.”

Sometimes the guests who come to visit are teenagers. “We wanted a party house, but we also wanted to design a place where our kids could hang out with [us and with] their friends,” Doug says.

And they do—making ample use of the hot tub, kitchen, flat-screen TV and surround sound—although ever aware that the wine cache is off limits.

Staying in the Jamestown School District was a priority, Doug says, circling back to their reasons for remodeling rather than moving, and gutting but not expanding. Aaron, 18, leaves for college this fall. Talia, 16, has two more years at Yorktown High School, but her parents are well aware of how quickly time flies. “We have no need for five bedrooms,” Doug says. “We’ll be empty-nesters before we know it.”

Happily, their home is now a nest that’s perfectly suited to their unpretentious and hospitable lifestyle.

“We could have moved elsewhere or torn this one down, but the house had good bones and we were able to make it exactly what we want,” Doug says. “Even when I go into brand-new homes, I don’t feel like I’m missing out. Our house has a warmth to it. It’s very emotional. The only way I’m leaving it is horizontally. I can’t imagine finding a better place to live.”

Jenny Sullivan is editor of Arlington Magazine, a former design writer and a new convert to the wonders of Madeira.