Winter Is Coming. Here’s How Restaurants Are Preparing.

Outdoor heat lamps, fire pits, tents and blankets are the new ambiance as the pandemic drags on. 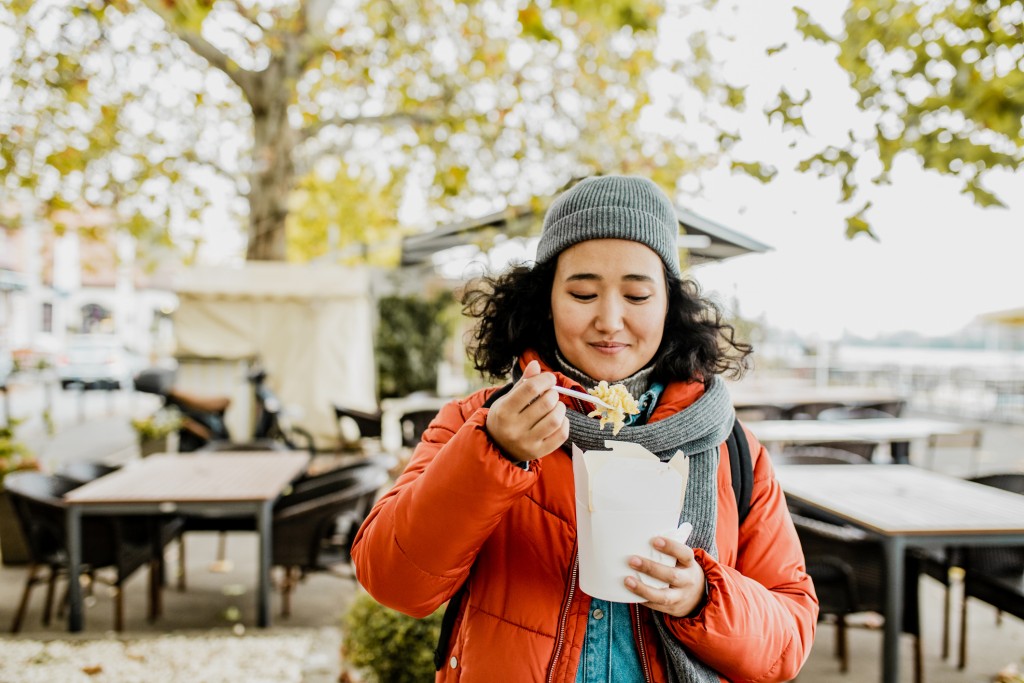 Restaurants have been constantly reinventing their business models since March, adding new takeout and delivery options, reconfiguring their dining rooms, carving patios out of parking lots and developing new menus. The latest Covid-era challenge: how to operate safely as winter sets in.

Kevin McNamara, co-owner of McNamara’s Pub and Restaurant in Crystal City, had an epiphany back in July.

“It’s a 100-degree day and I’m ordering heaters. I knew that if I didn’t get them then, there wouldn’t be any,” says McNamara, who, as of this month, is celebrating a year in business with six heaters on his rear patio space on 23rd Street.

He was ahead of the game. As temperatures drop, outdoor heaters have become as coveted as Clorox wipes.

McNamara’s outdoor seating area adjoins those of neighboring restaurants Urban Thai and Freddie’s Beach Bar, with whom his pub shares a rear parking lot. In June, the three establishments converted the parking lot to outdoor seating with county approval.  Each space is roped off to meet Virginia ABC guidelines. 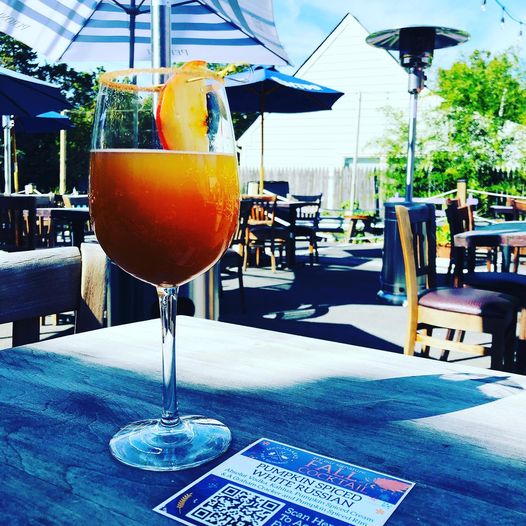 Now, with colder months ahead, McNamara is hoping the heaters will allow him to stretch the season and keep those outdoor tables in use. “All we are trying to do is to stay alive, get the staff through winter and into the spring,” he says.

In Clarendon, restaurateur Ivan Iricanin (whose properties include TTT, Ambar and Baba) is also turning up the heat. On November 6, TTT’s expansive rooftop bar unveiled a permanent structure with a retractable roof and sliding glass walls that can be heated when the air is chilly. Iricanin hopes the addition will keep the rooftop in use during the winter months. The new structure can seat up to 60 diners with social distancing.

Ambar, meanwhile, is poised to open a winter garden in its rear parking lot with a similar heated structure that can accommodate 60 to 70 guests, pending final approval from the county.  (Indoor spaces at Ambar, Baba and TTT also remain open to diners with social distancing in place.) 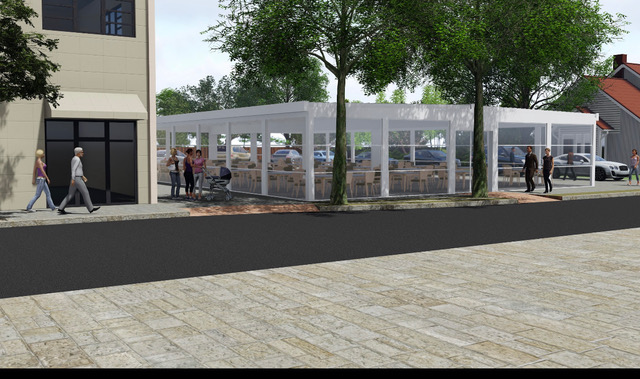 A rendering of the planned winter garden behind Ambar. Courtesy of Street Guys Hospitality.

Though many area restaurants received assistance via the federal Paycheck Protection Program, those funds were never designed to get businesses through the winter. Local governments and economic development entities have stepped in to help.

In early October, Arlington County released new restaurant guidance on TOSAs—temporary outdoor seating areas—including allowances for heaters and tents.  (The county released its initial plan for TOSAs in May, permitting expanded outdoor dining in parking spaces and sidewalks as Virginia moved into the first stage of reopening after the spring lockdown.) 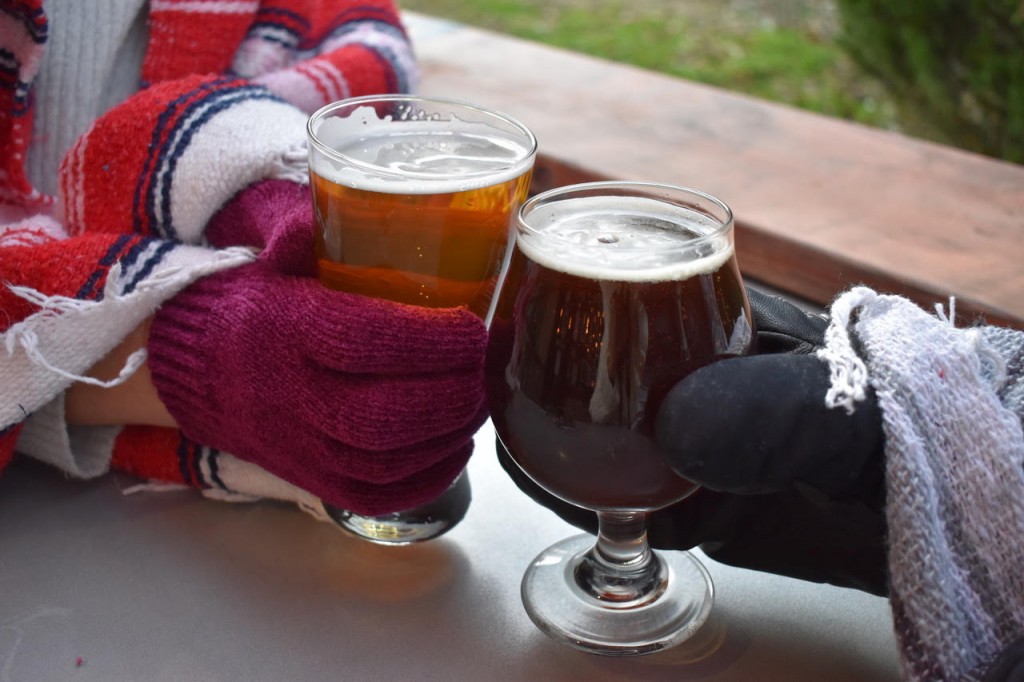 Bundling up for beers at Caboose Commons in the Mosaic District

Fairfax County similarly voted on Oct. 21 to allow outdoor dining in heated tents through the colder months. Keeping those tables occupied could be a matter of survival for many local restaurants as Covid cases spike and customers remain gun-shy about dining indoors.

A survey released this month by the National Restaurant Association found 43% of U.S. adults reporting that they had dined out—either inside or outside—in the previous week, compared with 60% during the last week of February 2020.

The same survey found 75 percent of diners who had eaten lunch or dinner out in the previous week indicating that they would consider dining in an “enclosed and heated tent, if standard social distancing measures were followed.”

Silver Diner, which has 20 D.C. area locations, offers curbside pickup and outside tent seating, although it’s also taken bold steps to make indoor dining safe again. The local chain recently installed ultraviolet-light sterilization systems in all of its restaurants to treat indoor surfaces and air, at a cost of half a million dollars. (UV light has been shown to kill the virus.)  “We’re going to get to a point where it’s so cold [customers] won’t want to sit outside anymore,” says chef/owner Ype Von Hengst.

In Falls Church, Audacious Aleworks owner Brian Reinoehl has added a canopy and propane heaters to the outside tables at his microbrewery, though he says he’s unsure how much heat the units will emit and whether they will truly make patrons more comfortable. He also blocked off the taproom’s inside bar with Plexiglas—a move that allowed him to add back more inside seating, per state guidelines. But he’s also focusing on to-go orders, and can and bottle production for his beer in an effort to stay afloat.

“Everyone is hurting,” he says.

Governor Ralph Northam’s newest Covid safety restrictions, which went into effect Nov. 15 and include a 10 p.m. curfew on alcohol sales, represent another operational hurdle for establishments like Audacious Aleworks. “The restrictions will cause our Friday night and Saturday nights sales to suffer quite a bit,” Reinoehl says. 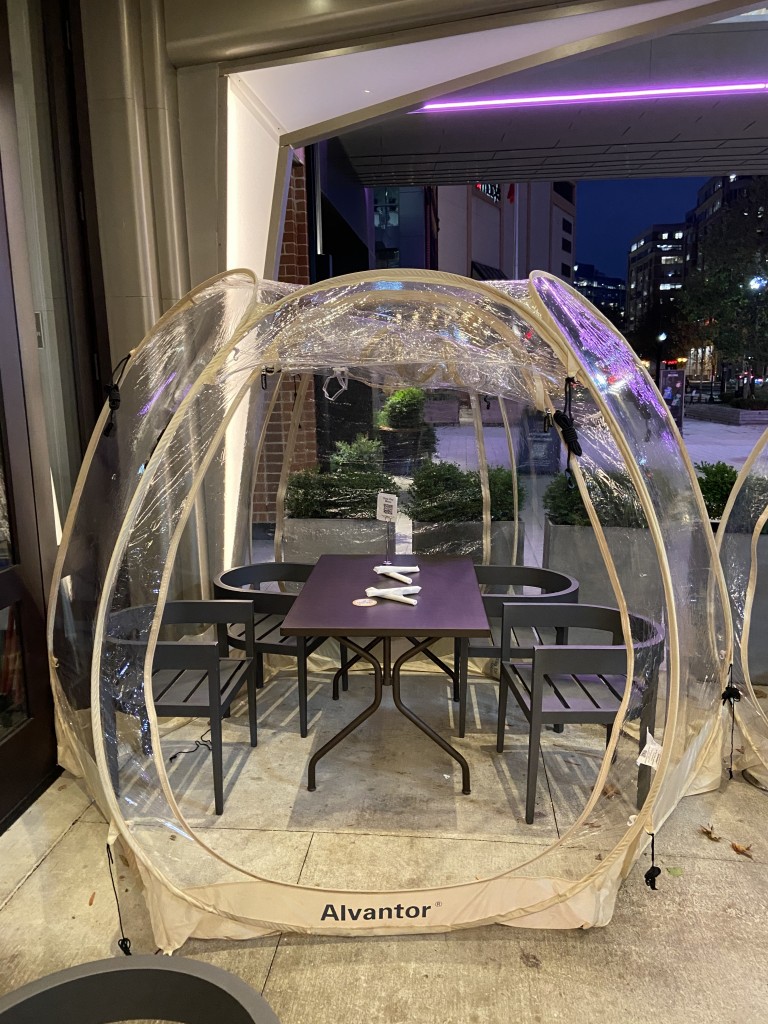 At Ted’s Bulletin locations in Ballston Quarter and the Mosaic District, outdoor diners can be zipped into one of eight, 7-foot-tall plastic pods outside of the restaurant. The clear bubbles seat four to six on a first-come, first-serve basis. They are made of flame-retardant vinyl, have vents on the sides and top for air flow, and are sanitized between seatings with a salt-based formula that works to kill Covid-19, but is safe for humans—similar to how chlorine operates in a pool, according to Nick Salis, who oversees operations for the restaurant group.

Salis says they’ve also applied for permission to put small space heaters inside the tents. He hopes to add them after Thanksgiving.

In October, Sloppy Mama’s Barbeque owners Joe and Mandy Neuman introduced an outdoor whiskey garden in the parking lot of their Lee Highway restaurant, where they are now encouraging patrons to bundle up and embrace the Nordic tradition of friluftsliv (which translates as “open air living”), even in frigid temperatures.

“Many restaurants are once again welcoming guests indoors; however, we cannot,” the Neumans wrote in an email. “Keeping our indoor dining room closed is necessary as many of our staff are in high-risk categories for Covid-19.”

Instead, servers pack up all food orders—including those consumed on-site—in to-go containers (the packaging keeps the food warm longer), along with cocktails.

“We could all do a little better getting comfortable with being uncomfortable,” Joe Neuman says. Fire pits may be added in the future. 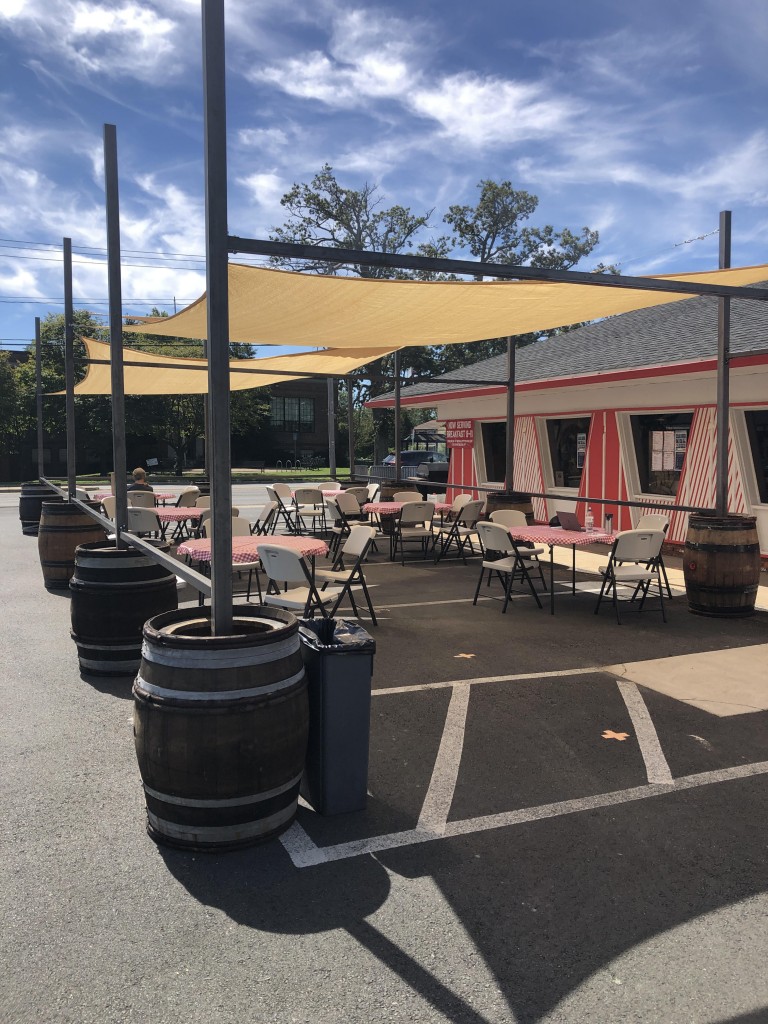 The whiskey garden at Sloppy Mama’s on Lee Highway

Many restaurants are scraping by with takeout and delivery, but the Neumans are part of a growing cadre of restaurateurs firmly opposed to delivery apps like Doordash and Ubereats, which charge participating restaurants fees of up to 30%, cutting deeply into their already strained margins.

Neuman encourages customers to order directly from local restaurants and pick up to-go orders themselves, or eat on-site, in lieu of having food delivered. “We pay a living wage, we offer staff benefits,” he says. “Delivery companies don’t. [Most delivery apps] don’t benefit the local economy.”

McNamara recently began using Waitbusters, a Reston-based technology platform that allows restaurants to use their own staff to do delivery runs.

Emma Cech, chef-owner of The Happy Tart in Falls Church, created her own ordering solution, whereby customers craving the gluten-free bakery’s coffee and pastries can walk up to the storefront and punch their orders into an outdoor kiosk that Cech built herself. The order comes out quickly (there’s no need to go inside) and patrons can sit at one of the sidewalk tables (no heaters) or take their goodies home.

GoTab, a contactless ordering platform based in Ballston, has seen 150% customer growth since the pandemic arrived in March. Restaurant groups using its technology include Founding Farmers, Jose Andres’ ThinkFoodGroup, and Caboose Brewing. 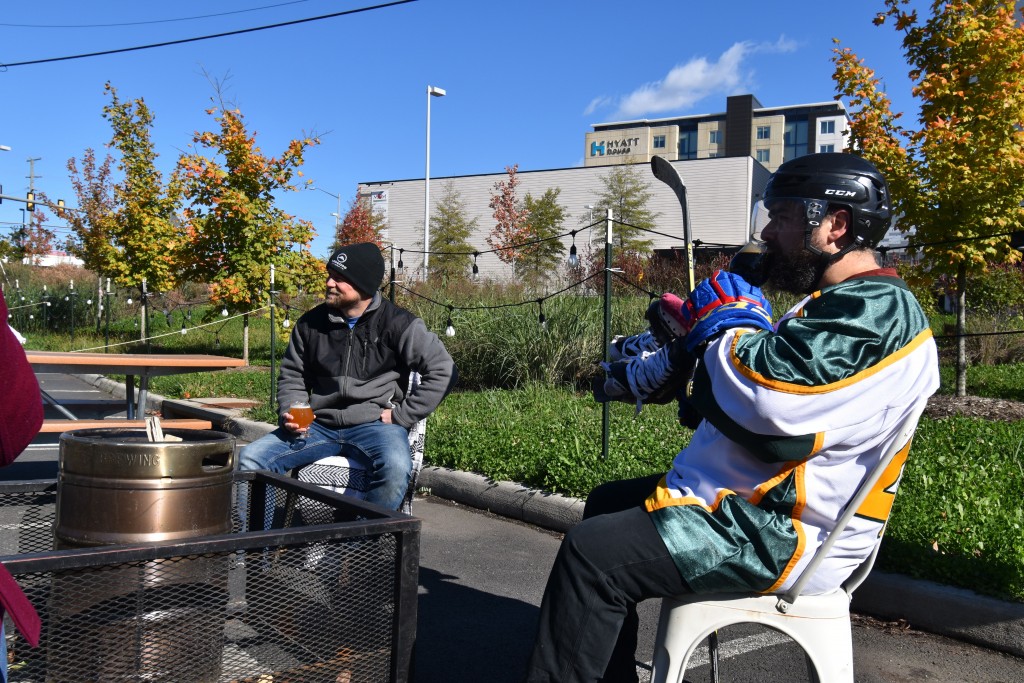 Outdoor drinking around the fire pit at Caboose Commons

At Caboose Commons in the Mosaic District, the GoTab app allows customers—whether they are seated inside, on the outdoor patio or around fire pits in the parking lot—to pull up the Caboose menu on their phones using a QR code. They can then order and pay electronically through the app, requiring only minimal contact with waitstaff when food and brews are delivered tableside.

Caboose is also leaning into the colder weather by selling hand warmers and blankets (if you don’t bring your own) and offering “Crappy Hour” discounts when the temps dip below 50 degrees.