Yoga and Beer? Why Not?

A combo event at Capitol City Brewing in Shirlington invites participants to go with the flow. 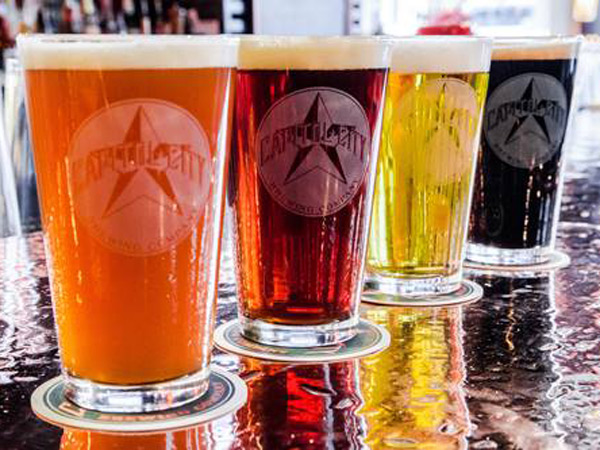 This is so much more civilized than hashing. If you’re not interested in running several miles before downing a pint, Beth Wolfe and the Capitol City Brewing Company have another idea: Enjoy an hour of yoga in the Shirlington restaurant’s brew room, then step outside for a cold brew. No jogging necessary.

The first “Asana & Ale” event in what Wolfe and Cap City Manager Al Chadsey hope will become a regular series is on Monday, June 15 at 7 p.m. The $15 fee includes an hour of Vinyasa yoga and a pint of beer.

The brew room holds 25 people, and there were 12 spots left as of Tuesday afternoon.

“I live in Shirlington, and I just thought this was a great idea,” says Wolfe, a regular instructor at Ease Yoga & Café in Del Ray.

For good reason. Wolfe, who doubles as a wine importer and yoga instructor, first saw success in combining the two at Grateful Red Wine Shop in Clarendon. The wine shop purchases wines from Springfield-based Siema Wines, the importing company where she works.

“I would get up off the mat and open up the wines we were importing,” Wolfe says. That session quickly sold out. (She and Grateful Red owner Wendy Buckley are now in talks about doing another one, but have yet to nail down the details.)

“I feel like wine people and yoga people are sort of the same,” Wolfe says. In both areas, “there’s an unlimited amount of information out there—you never stop learning.”

Chadsey agrees. Plus, he says the “Asana & Ale” event is consistent with other offbeat events he’s staged at the brewery, including “Theology on Tap,” which invites clergymen of all denominations to lead religious discussions over brews once or twice a month.

On Valentine’s Day, Cap City brings in a shredder and invites customers who are not romantically involved to shred pictures of their exes—and the first drink is on the house.

“I do things that are a little bit avant-garde, and this just fits into what I wanted to do,” Chadsey says.

Can’t make it to the first one?  There will be other opportunities to chill out this summer with down-dog and a pint. A second yoga-and-beer event is scheduled for July 20.

Advance payment is necessary to reserve a spot. Call 703-578-3888 with a credit card number to confirm.