It’s the perfect dish for a winter day. 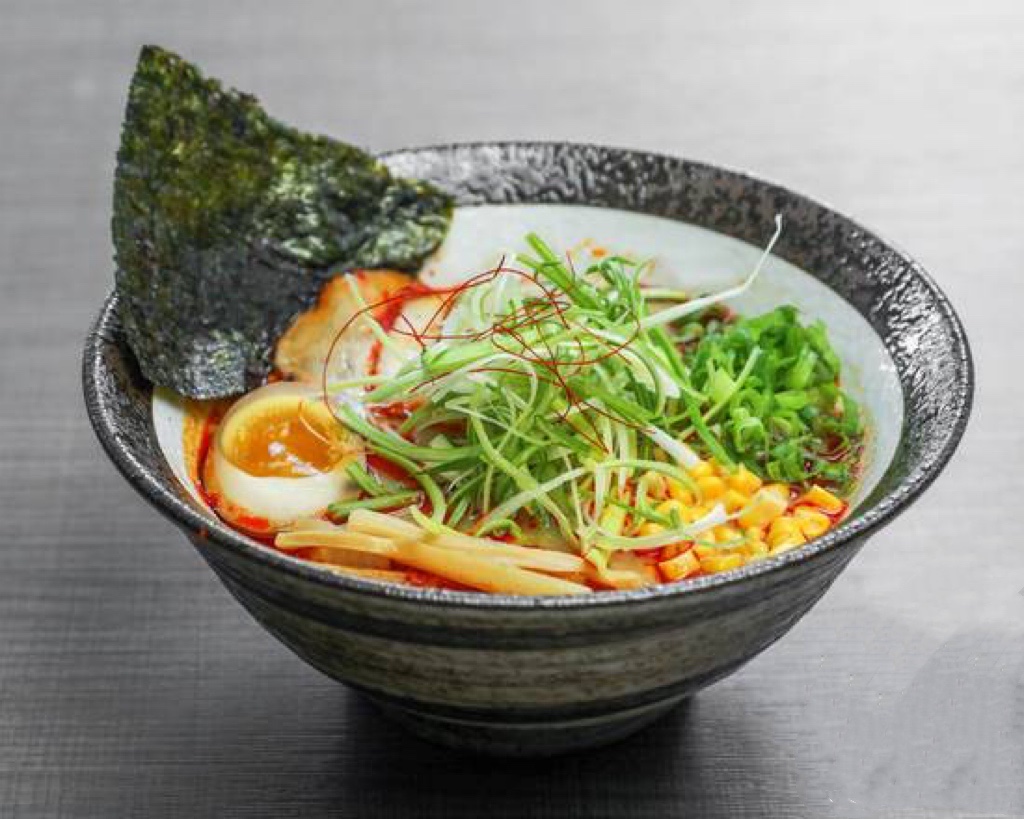 If you’re feeling under the weather or craving something warm on a chilly day, a bowl of ramen might be just what you’re looking for. The traditional Japanese noodle dish features plenty of fresh toppings, add-ons and spice levels, making it easy to customize to your taste. Cooking the broth and noodles takes time and expertise to master, so it’s worth your time to explore authentic preparations nearby. Try these local ramen spots—including several new locations—for your next curly noodle fix.

Toryumon is new-ish to Arlington; the team at the D.C.-based Japanese house opened its second location in Rosslyn in July 2020. You don’t want to miss their house ramen, which features bacon and pork chashu in its homemade tonkotsu broth with a silky texture. Guests can control the level of pork oil in all ramens and add house-made tantan paste—a mix of peanuts, sesame and chili oil—miso paste or hot chili oil to any bowl of noodles. Toryumon also offers an extensive sushi menu, hibachi dishes and several Japanese small plates; try the gyoza, fried octopus, soft shell crab and okonomiyaki, which is a savory pancake made with bacon, shrimp and cabbage. The restaurant seats 70 inside and has limited space on its patio when the weather is warm. You can also order take-out or delivery on Grubhub, UberEats or Doordash. // 1650 Wilson Blvd., Arlington (Rosslyn) 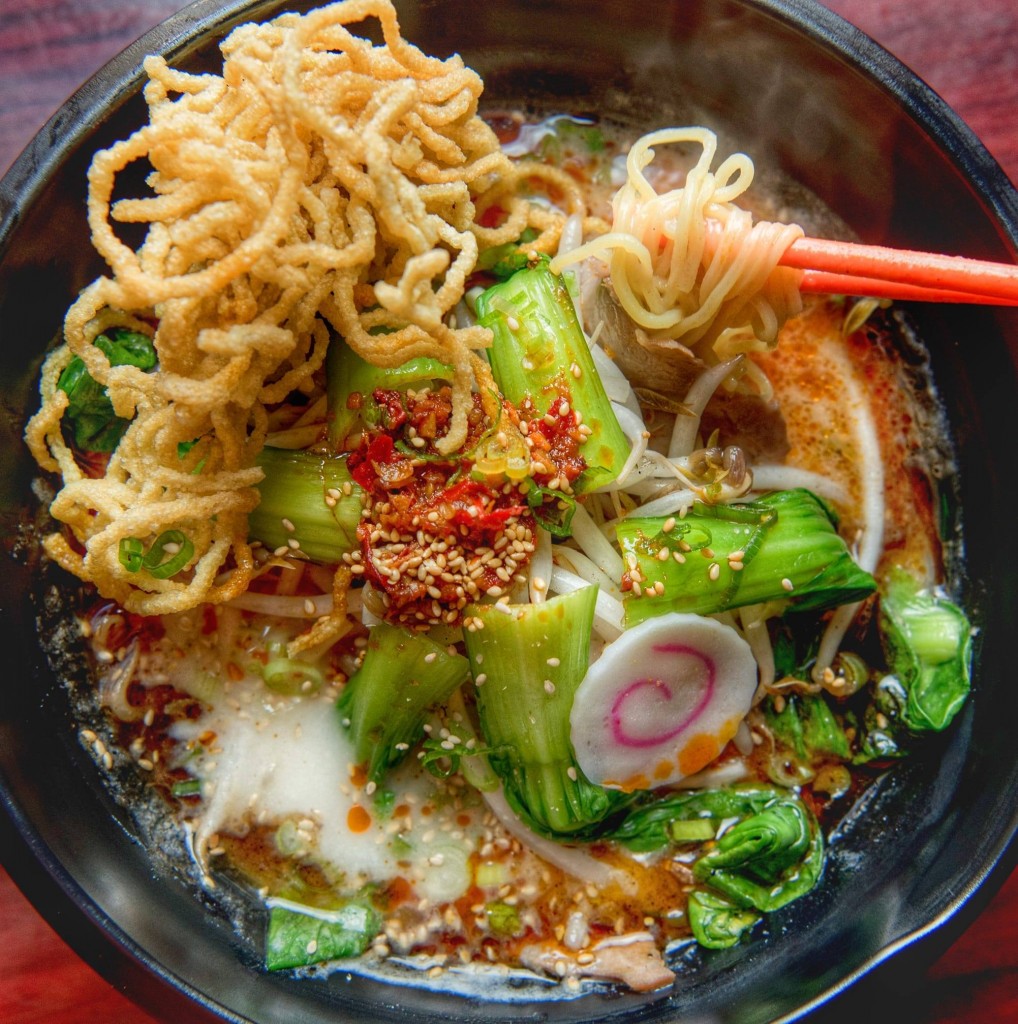 Along with house-made wheat noodles, you can order gluten-free rice noodles and soba noodles from Gaijin. (Photo courtesy of Gaijin Ramen Shop)

This compact storefront, which earned a Best of Arlington nod for Best Ramen in 2018, is currently only open for delivery and take-out due to COVID-19. You can place an order at Gaijin Thursdays through Sundays, as the broths are made in-house on Tuesdays and Wednesdays. Gaijin serves more than 20 varieties of noodle soup, and specialty ramens are the stars here. Try the Bam Bam—a chicken broth base topped with bulgogi beef, mushrooms, bean sprouts and a soft boiled egg—and the Sumo Mama, made with a creamy tonkotsu broth, pork belly, bok choy, egg and black garlic oil. Gaijin offers house-made wheat noodles, gluten-free rice noodles and soba noodles, and toppings ranging from pork dumplings and fried chicken to kimchi and avocado. You can also order “soupless” ramen—noodles that come in a sesame yuzu sauce. Go beyond the ramen and order a few of their Oishii Oishii steamed buns, stuffed with curry chicken, pork belly or softshell crab. // 3800 Lee Highway, Arlington (Cherrydale) 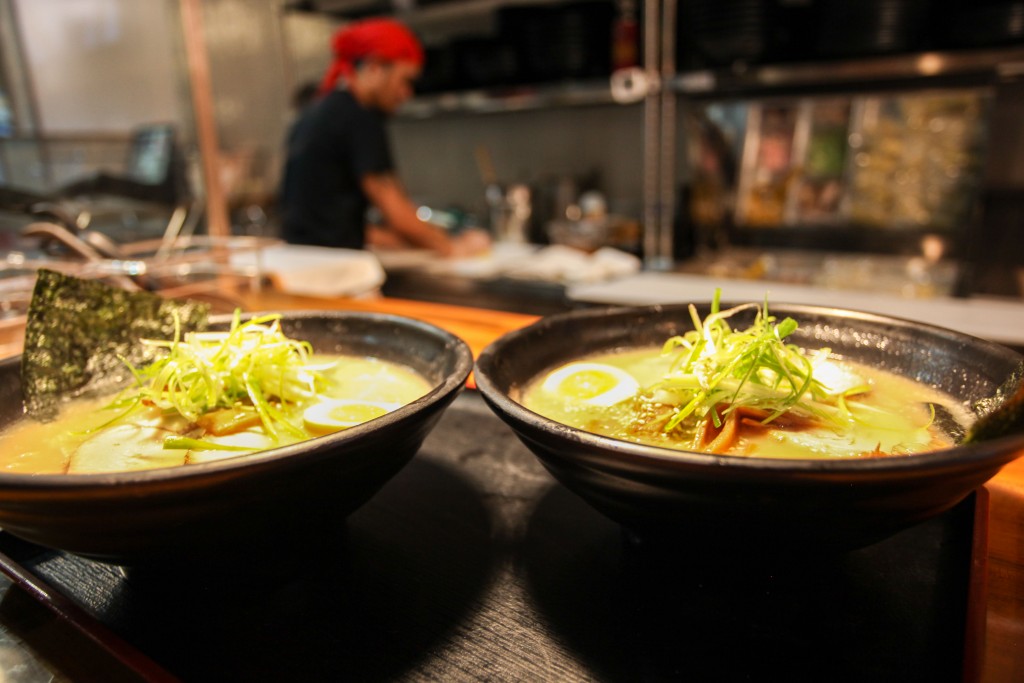 The Columbia Pike eatery offers more than a dozen styles of ramen, including bowls topped with crab, fried tofu-edamame balls and shrimp tempura. The pork broth base of Boru’s bestselling Hakata Tonkotsu takes 24 hours to make, and is then poured over chewy noodles, pork chashu, seaweed, bamboo shoots, egg and green onions. Don’t miss the boruballs appetizer, which are panko-crusted pork meatballs seasoned with soy, garlic, black pepper and rice, served with spicy mayo, powder seaweed and pickled radish. Over the last two years, Boru has added a sushi menu, including custom and traditional rolls, nigiri and sashimi. The restaurant does a take-out and delivery service through its website, and also is open for dine-in at small tables or their sushi counter, where you can watch the action in the kitchen. // 2915 Columbia Pike, Arlington (Columbia Pike)

Hanabi Ramen’s Champon ramen is served in a specially made pork- and scallop-based broth. (Photo courtesy of Hanabi Ramen)

Hanabi, which opened in 2017, offers ramen soups, as well as “dry ramen” known as tsukemen. In tsukemen dishes, noodles are served separately from the broth, and the broth is used more for dipping than slurping (until the end). New to the ramen list is its Champon ramen: noodles, vegetables, pork, shrimp and squid in a unique pork and scallop broth. Hanabi is best known for its Tan Tan Men ramen, a sesame paste-based spicy miso pork broth filled with ground pork, cabbage, bean sprouts, seasoned egg and bamboo shoots. Plump pork gyoza, udon noodle, donburi rice dishes and yakisoba are also offered as part of its menu. The tiny shop has only a few dozen seats to dine inside, including several with a front-row view of the open kitchen. You can also order take out through the restaurant’s website or delivery through Doordash, UberEats, or Grubhub. // 3024 Wilson Blvd., Arlington (Clarendon) 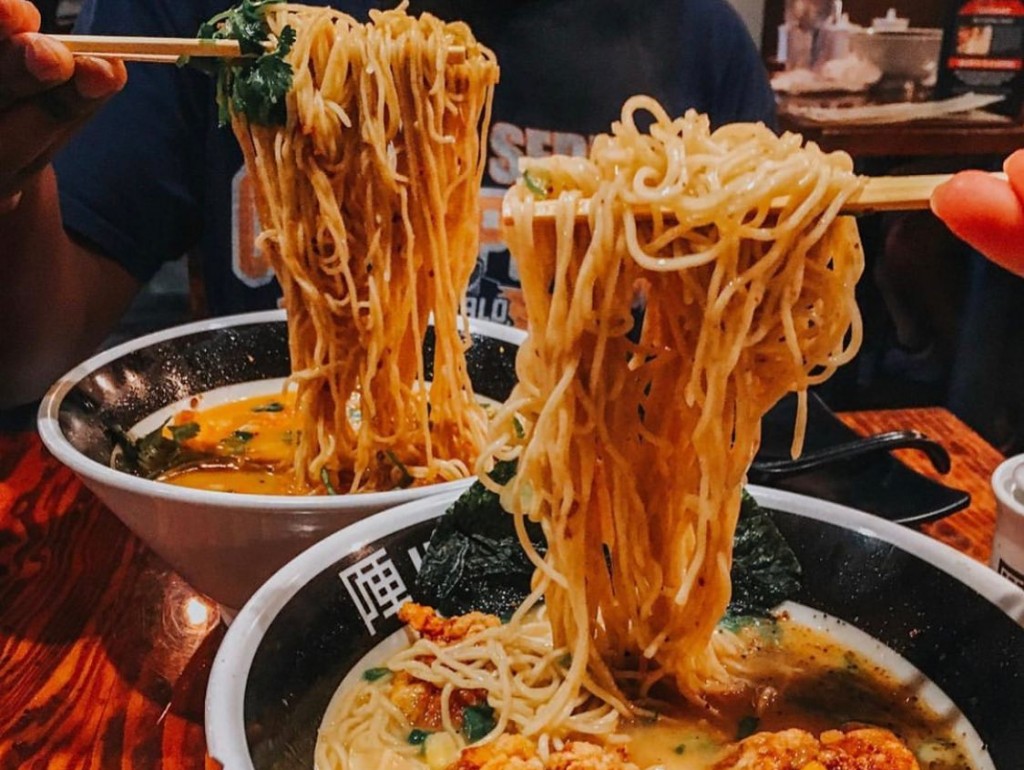 Jinya is expected to open a new location in Ballston in Spring 2022. (Photo courtesy of Jinya Ramen)

The Tonkotsu Black Ramen is the top draw at the Mosaic outpost of the national Jinya Ramen Bar chain. It features a pork-based broth with pork chashu, kikurage mushrooms, green onion, nori, garlic chips, garlic oil, fried onion, spicy sauce and thin ramen noodles, and it’s topped with an egg that’s been seasoned for two days in soy sauce, garlic and sesame oil. If you like garlic, ask about the off-menu Cha Cha Cha, with a garlic-infused pork broth. Grab a seat on the patio in the warmer months—the restaurant is expected to have even more outside seating when it moves to a vacant space in the same plaza later in 2022. A new Ballston location at 4238 Wilson Blvd. is expected to open later this winter. // 2911 District Ave. #140, Fairfax (Mosaic District) 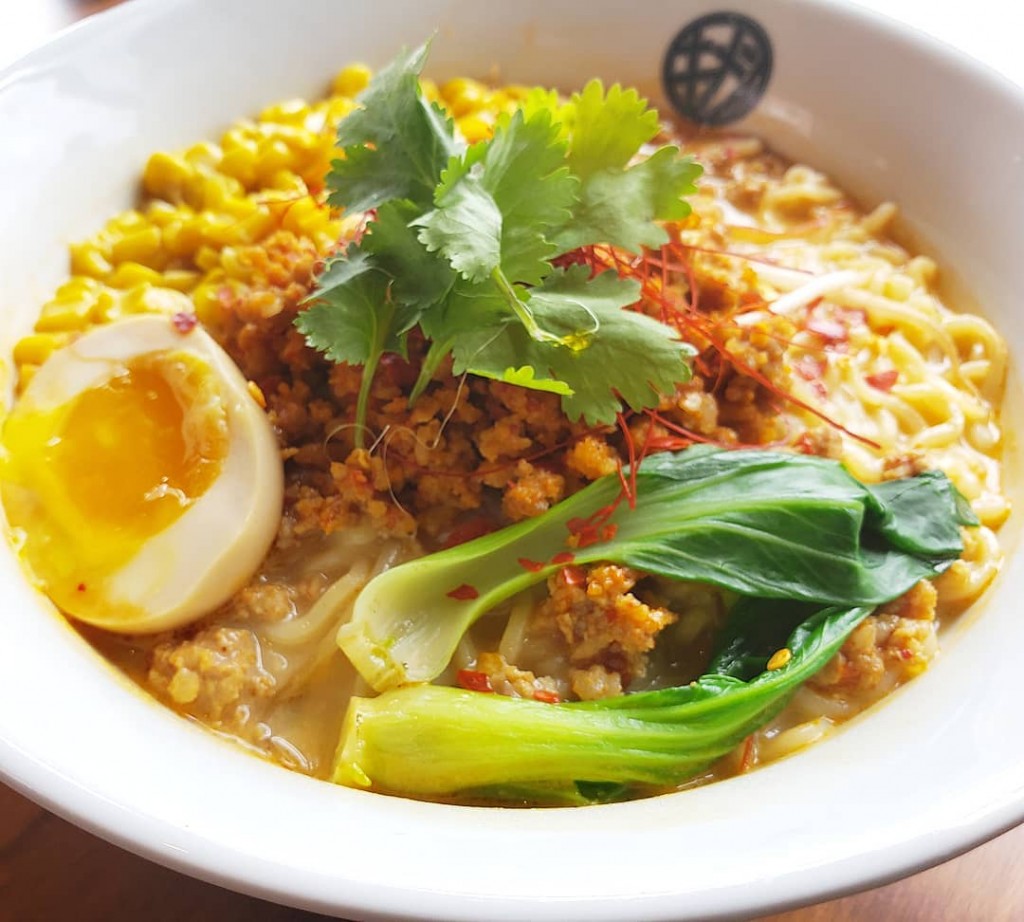 This tiny Annandale spot, which opened in 2019 near The Block food hall, is known for its house-made pork and chicken broths, made daily. One of their best-sellers is the spicy Tantanmen ramen, with minced pork, egg, bok choy, red pepper and peanut sauce in a pork broth. You can indulge in plenty of fried appetizers from the starters menu, such as tempura, karaage (fried chicken with spicy mayo) and takoyaki (fried octopus with kewpie mayo and umami-packed okonomiyaki sauce). Dine inside or order delivery or to-go online. //4217 John Marr Drive, Annandale 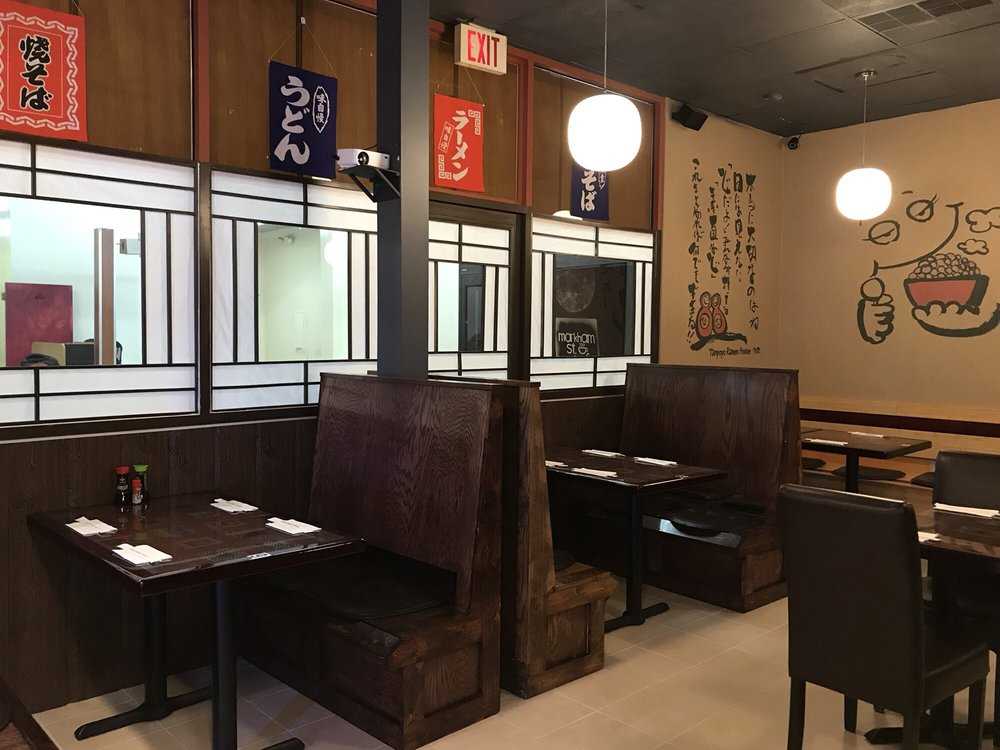 Tucked away in Annandale near the bustling A&J Restaurant, this shop has been serving traditional ramen for a decade, making it one of Northern Virginia’s oldest ramen stops. Order the Hakata Tonkatsu ramen, showcasing a house-made pork broth with red ginger and black garlic oil. Be sure to pair it with sushi and sake from Tampopo’s extensive menu of both. You can dine in, call in a to-go order or browse the menu on several delivery platforms. // 4316 Markham St., Annandale 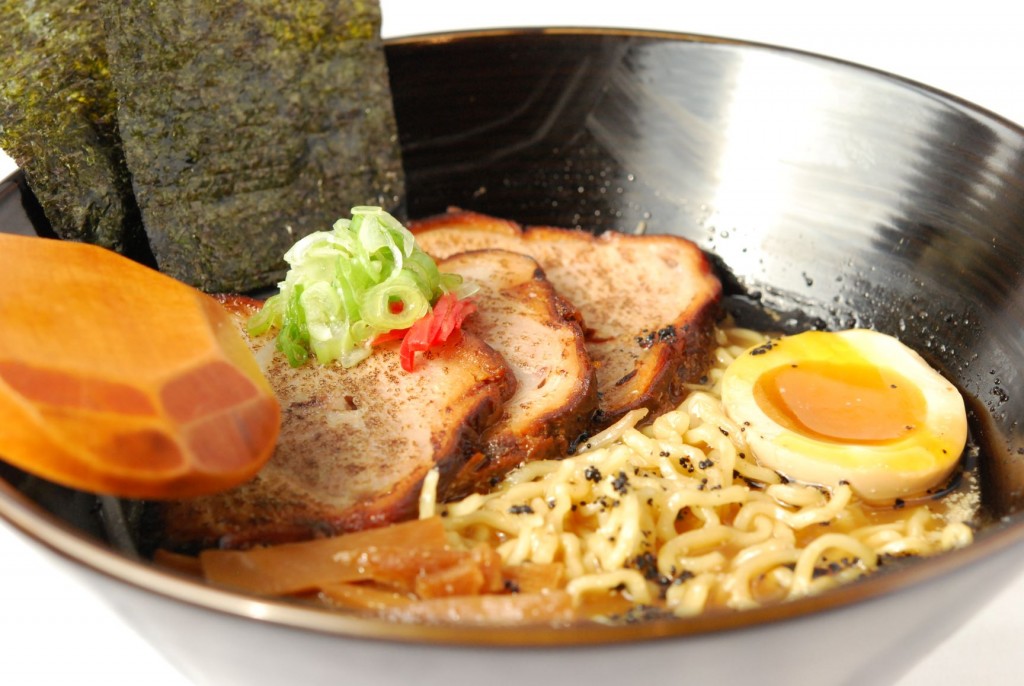 Kizuna makes all of its broth and toppings in-house. (Photo courtesy of Kizuna Ramen)

Since it opened in 2015, Kizuna has made its pork and chicken broth in-house, along with all of its ramen toppings. That list includes toro chashu—pork belly that’s marinated in soy sauce, mirin and sake, then braised for seven hours, wrapped, chilled, sliced, torched and charbroiled. The expansive Tysons Corner restaurant goes through more than 700 pounds of pork belly a week, with much of it going to its best-selling toro chashu ramen, with red pickled ginger and bean sprouts. Add an order of Kinzuna’s monster dumplings—kaiju gyoza, filled with pork, cabbage, chives and garlic—or its other hot-seller: chashu-topped tater tots. Guests can eat in or order for take-out or delivery through the Kizuna website (or on GrubHub, Doordash or UberEats). The restaurant has a small patio, but it isn’t open in the colder months. // 8221 Leesburg Pike, Tysons 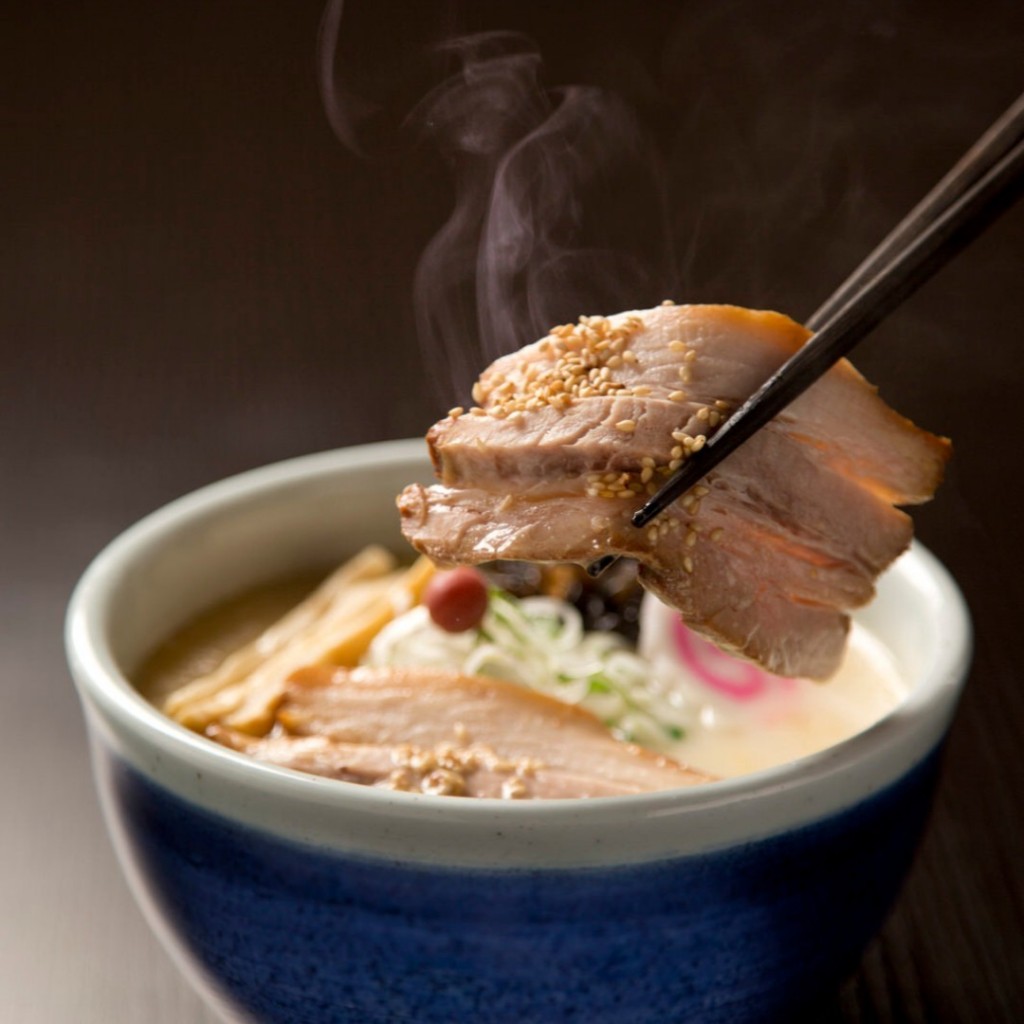 Santouka is known for its signature tonkotsu broth. (Photo courtesy of Santouka)

The first D.C.-area outpost of this acclaimed Japanese chain opened in August of 2020 in the Boro section of Tysons. Santouka is known for its signature tonkotsu broth, made by simmering pork bones for nearly a day. The broth is the base for its bestselling shio ramen and can be used for its savory toro-niku ramen—made with pork cheek—as well as a half-dozen other bowls. Along with inside dining, Santouka offers limited outside seating and recently added alcohol to its menu, so order warm sake and bring the restaurant’s custom-made blue porcelain bowl outside to slurp. A modified menu is available for take-out available via its app (no phone orders). // 1636 Boro Place, McLean/Tysons 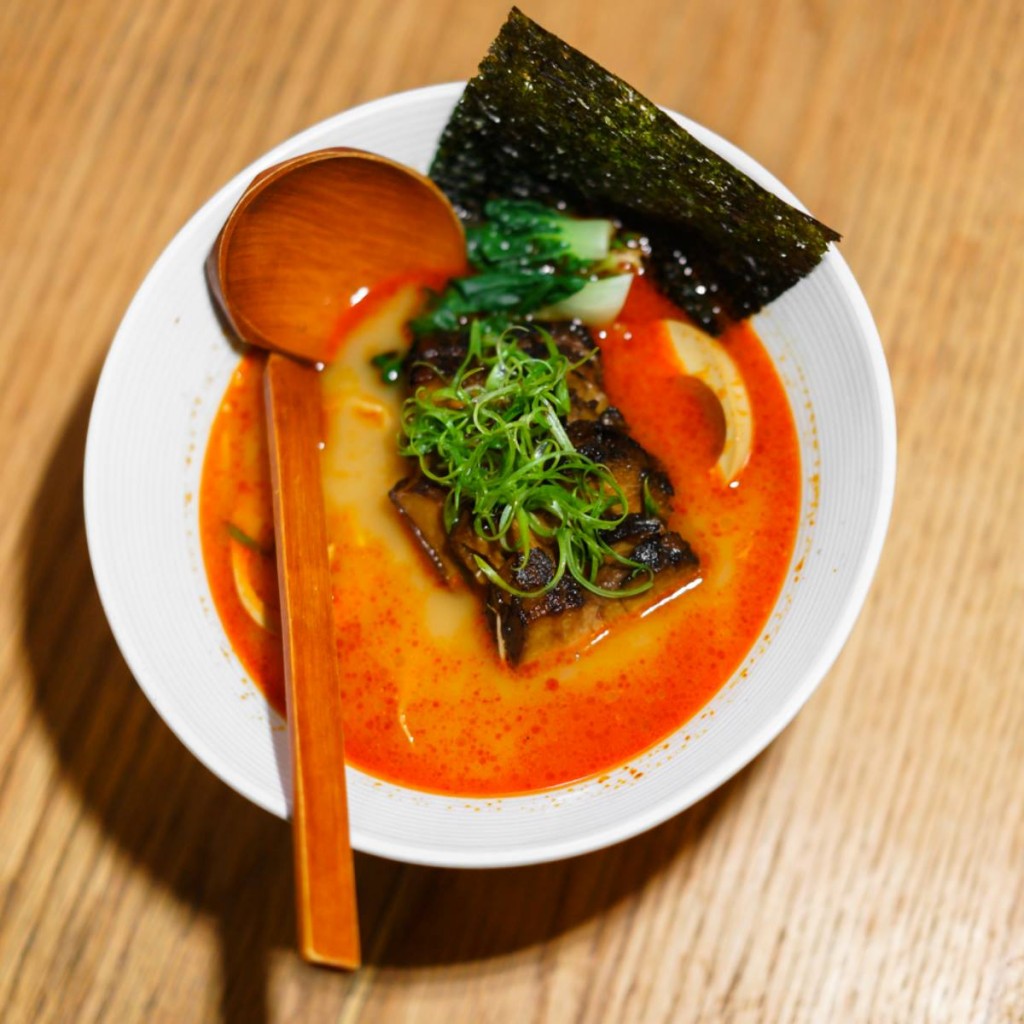 Ichiban is good for groups where you’re seeking a little of everything. There are two locations in the area: The original spot is located in Alexandria, and the second outpost opened up in the former Blue Sea seafood restaurant space in Shirlington in 2015. The pan-Asian restaurant offers a sprawling sushi menu, as well as three ramen options with non-traditional bases:  miso (spicy and plain), soy broth and house-made kimchi. If you’re not dining in, you can place an order for delivery or pick-up via GrubHub. The patio is open in cooler months, but it’s not heated, so bring a hat and gloves. // 4251 Campbell Ave., Arlington (Shirlington)

→ Where to Find the Best Hot Chocolate in Arlington