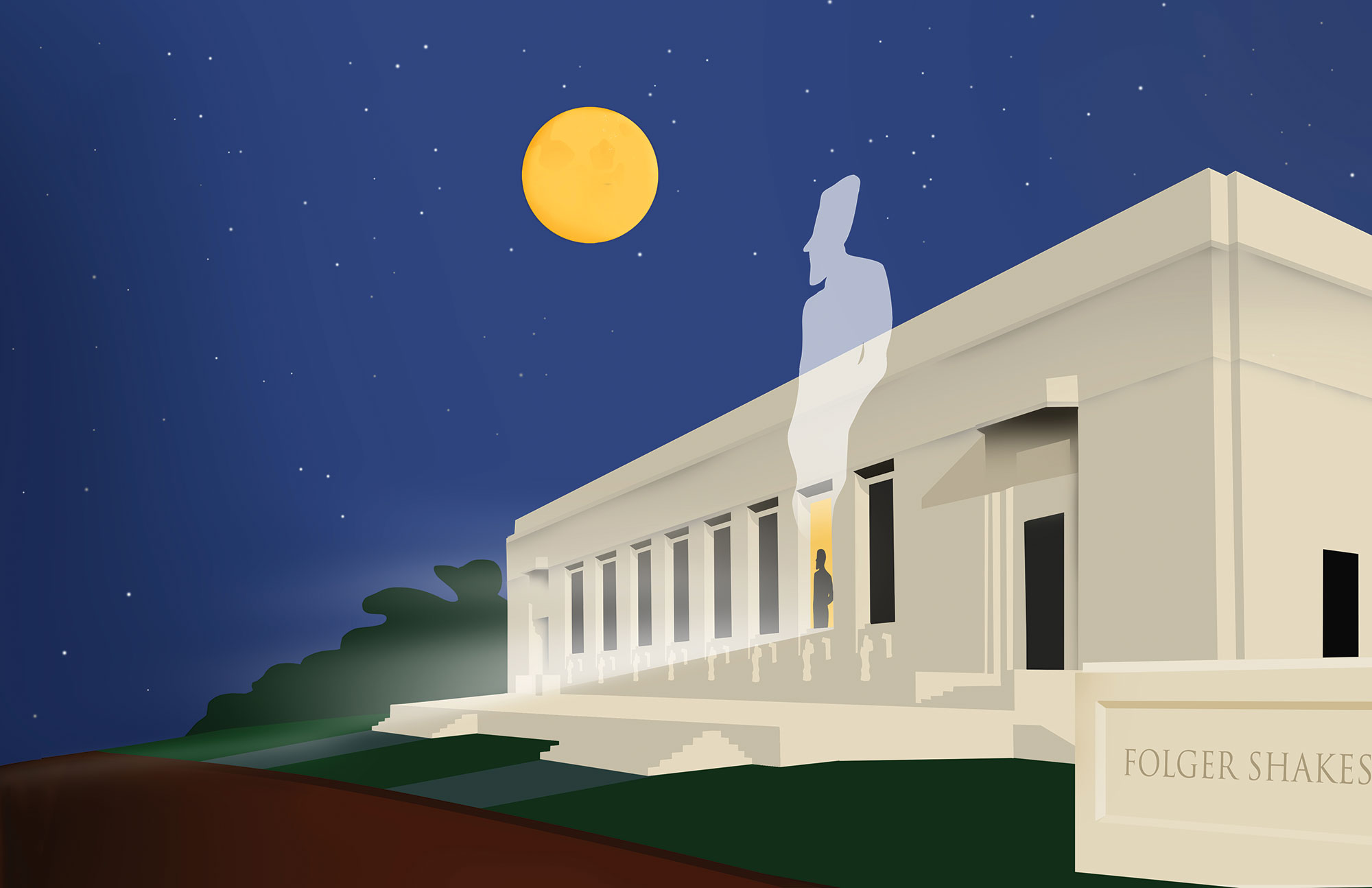 If Capitol Hill isn’t haunted, it probably should be, considering all the momentous events that have happened here. Part of the fun of the Capitol Hauntings tour is the novelty of seeing the U.S. Capitol deserted and glowing from within after dark, or sitting on a bench outside an eerily quiet Folger Shakespeare Library long after everyone else has left for the night.

The lights in the library are routinely turned off when it closes, according to one Washington Walks tour guide. If you notice them burning late at night, it might be the work of Henry Folger, who, along with his wife, Emily, curated the world’s largest collection of books relating to William Shakespeare, including 82 copies of the playwright’s 1623 First Folio of plays. The Folgers built the library to house their beloved book collection, but Henry died before the building was completed in 1932—and some workers say the oil baron flips the lights on sometimes to view his finished project. It may help that Henry and Emily are still present in the building; their ashes are interred inside the reading room, behind a bust of Shakespeare.

This walk stands out for how much interesting American history is hidden inside the ghostly tales. Other stops on the same tour include a former trolley stop, the Library of Congress, a district police station and the oldest house on Capitol Hill.

Washington Walks offers its Capitol Hauntings tour only in October, on Friday and Saturday nights. The two-hour walk leaves from the Capitol South Metro station at 7:30 p.m. Reservations are unnecessary but arrive a few minutes early to pay your $20 fee, or book and pay online. Those with a military or federal government ID receive a $5 discount, and both cash and credit cards are accepted. The walk departs rain or shine. For more creepy D.C. tales, try the Most Haunted Houses tour, also scheduled for Friday and Saturday nights in October. Call 202-484-1565 or visit washingtonwalks.com.

Ghost tours in Maryland’s capital come with a view of the Chesapeake Bay, which seems just right for a city that started life as a Colonial seaport. Between views of the water, the walk wanders through a historic cemetery before ending up at Ego Alley, the city dock where you can check out the high-end sailboats visiting for the day.

Sailors, shipbuilders and sea captains all factor into the town’s lively naval history, both ghostly and well-documented. One of the funniest stories, however, has to do with an early town gravedigger. When local children teased him, he was said to get even by going to their homes and digging a miniature grave in each child’s front yard.

Some of the stories dig into the past of the downtown’s many pubs. For example, inside the Maryland Inn, a small downstairs bar called the Drummer’s Lot Pub is named after the parcel of land the hotel is built on—once an open lot where the town drummer (similar to a town crier) stood to spread public messages via drumbeats. The inn has remained in business ever since its doors opened during the American Revolution, making it one of the oldest continuously operating hotels in the U.S. And what would a building that old be without a few ghost stories?

Annapolis Tours and Crawls offers a walking tour through the historic downtown that lasts 90 minutes to two hours and runs from spring through fall. Reserving online is recommended. Tickets are $18; $15 for military; $12 for kids ages 5-11. The walk departs from the front porch of the Maryland Inn at 16 Church Circle. For those who prefer spirits with their spirits, the company also runs a haunted pub crawl. Call 443-333-4774 or visit toursandcrawls.com/annapolis_home.